"A brother's grave for two"

The T-60 was the result of the ongoing development of light tanks that had started well before WWII. This particular tank started development in 1938 as an attempt to replace the T-26, T-40, the failed T-46 project and the T-50. Whilst such a large number were produced, it was hated by all who had to deal with it - all except the Germans, who found it to be a substandard and underwhelming opponent, and a rather nice ammunition carrier or gun towing tractor, once captured. As a result of its poor armor, substandard armament and sluggish performance, it was more dangerous to its crews than anybody else, earning it the title Bratskaya Mogila na Dovoikh, literally: "a brother's grave for two." 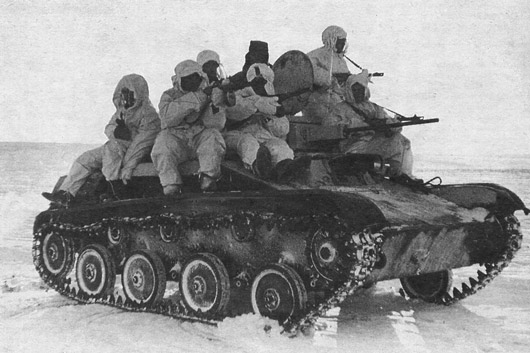 A T-60 being ridden into battle. Tank riding was a crucial part of the Soviet deep battle tactic.

In 1938, as a result of the poor performance of the vastly outdated Soviet light tank arsenal, N. A. Astrov's Zavod Nr. 37 team was busily working on two prototype tanks - the T-30A and the T-30B. The T-30A prototype was accepted into service as the T-40 amphibious tank. However, by 1941, the team was tasked with developing a new light tank that could be rapidly produced in large numbers to satisfy the Soviet's desperate need for tanks. The T-40 led to the T-40S (sukhoputniy, "dry-land" version), a heavier tank prototype, which was considered too complex to manufacture, so the team backtracked to the T-30B, which shared the same chassis as the T-40, except with greater armor and no amphibious capability. They retained the chassis, suspension and engine of the T-40, but redesigned the hull with an improved silhouette and they also increased armor up to 25 mm (0.98 in) on the front. A distinctive eight-sided conical turret was also designed, as it was much cheaper to make than the T-40's turret. Finally, the generally ineffective 12.7 mm (0.5 in) machine-gun was retained, as well as the co-axial DT machine gun.

The basic design was completed in a mere fifteen days, and Astrov, seconded by Lieutenant Colonel V.P. Okunev, wrote to Stalin contrasting the advantages of the mass-producible T-60 with the more complicated T-50, that already received the go-ahead. An inspection from a senior minister resulted in two decisions: firstly, the 12.7 mm (0.5 in) machine gun was to be replaced with a 20 mm (0.79 in) ShVAK, although it was still inadequate against the Panzer IIIs and IVs that the T-60 would almost certainly engage whilst there was a shortage of T-34s. Secondly, the Main Defense Committee (GKO), headed by Stalin, ordered 10,000 T-60s to be produced immediately. Some sources have claimed that Stalin's interest in the vehicle is because he attended the vehicle's final trials in person.

The displacement of the Soviet industry in 1941 disrupted production and further refinement of the T-60. In autumn, Zavod Nr 37's work on the T-60 was transferred to Zavod Nr 38 at Kirov and GAZ in Gorki. Shortly after, industrial evacuations continued, and GAZ was the sole producer of the T-60. In 1942, the T-60's frontal armor was increased to 35 mm (1.37 in), which was still inadequate and made the tank more sluggish. The GAZ-203 engine gave the T-60 theoretical speeds of 44 km/h (27 mph) on road and 22 km/h (14 mph) off-road, but this was always difficult to achieve as a result of horrifically bad mud and snow. Replacing the spoked roadwheels on the 1941 model with all-metal disc wheels, especially as a result of rubber shortages, did not help alleviate this problem either. The development of removable track extensions also did little to help mobility.

The Antonov A-40 (sometimes referred to as the A-40T or Krylya Tank, "tank wings") was an attempt in 1942 to create a flying tank - only one prototype was produced. Due to the lack of a sufficiently powerful aircraft to tow it at the required 160 km/h (99 mph), the project was abandoned. 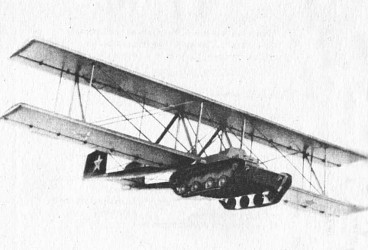 An illustration of the Antonov A-40 in flight, circa 1942, produced by the Antonov factory.

Later models of the T-60 in 1942 had an increased frontal armor of 35 mm (1.45 in), however, this was still unsatisfactory and the increased weight made the tank even slower and less maneuverable. Some attempts at modifications to fix this problem failed. An unknown number of T-60s were captured by the Wehrmacht and put into service, much like many captured Soviet tanks. They often had the turret removed and towed artillery pieces as well as AT guns, and carried munitions as well. The BM-8-24 referred to both the T-60 and T-40 tanks that had 24 82 mm (3.23 in) rockets on a rack instead of a turret. These were mostly built during 1941 and about 44 T-40s and T-60s were converted. 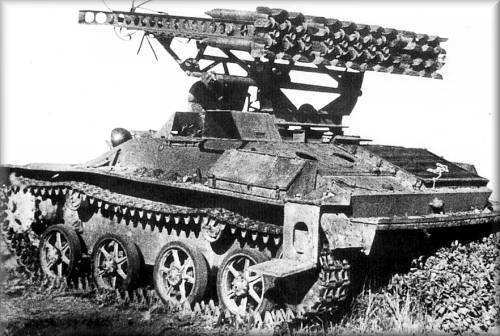 The Romanians modified 34 captured T-60s into TACAM T-60 tank destroyers in 1943. It had a captured Soviet F-22 76.2 mm (3 in) gun housed in a light armored superstructure open at the top and rear, a typical tank destroyer configuration at the time. All surviving vehicles were confiscated by the Soviets after Romania defected to the Allies in August 1944. The Romanians also developed a very modern for its time low height full armor tank destroyer using parts from the T-60, the Mareşal. Its shape and size were very similar to the famous Hetzer German tank destroyer (in fact, the Romanians started developing it well before Hetzer, giving rise to the theory that Hetzer itself was inspired from the Mareşal). It mounted a Romanian 75 mm (2.95 in) anti-tank gun and used armor plates from salvaged Soviet BT tanks and a Hotchkiss petrol engine. The prototypes and the first unfinished batch of pre-production vehicles were confiscated by the Soviets and no further work allowed after Romania shifted sides.

The T-60 was simply dreadful. As a result of the combination of inferior armor, a sub-standard main gun, poor mobility and a two-man crew, it was universally hated by the Soviets. In a meeting with Stalin in 1942, Major-General M.E. Katukov said: "It has only a 20mm gun. In serious combat with armored forces, it just does not have it ... To attack in mud or snow is a deadly affair. In the battles around Moscow, we continually had to drag them in tow."

As stated earlier, crews named them "a brother's grave for two" because they were so vulnerable to German attacks. However, one could argue that during the grim days of 1941 and 1942, they were better than nothing. Katukov, who was then Commander of the Ist Tank Corps in early 1942, was forced to acknowledge the debt he owed to the T-60: "In this fateful hour, when the Germans had almost defeated us, those ridiculous tanks saved our positions. It was lucky that the rye in the area was almost a meter high, as the T-60s were hidden by it. Using the rye field, both of our T-60 tanks were able to infiltrate the rear of German infantry and open fire on them. After several minutes of intense fire, the German attack was halted."

Late war use of the T-60 saw it relegated to minor roles, such as reconnaissance, defending headquarters, convoy duties and training new crews. German captured vehicles tended to be used as tow vehicles and were generally agreeable, given the lack of German tow vehicles and their reasonable range. 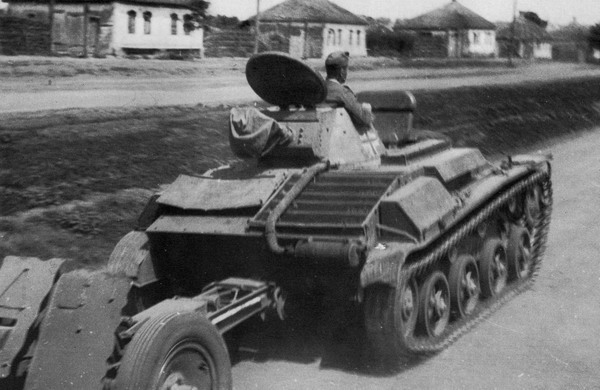 Beutepanzer T-60. The Wehrmacht managed to capture dozens of T-60s following the latter stages of Operation Barbarossa and after. They were quite happy with these, re-used as artillery tractors and supply vehicles. 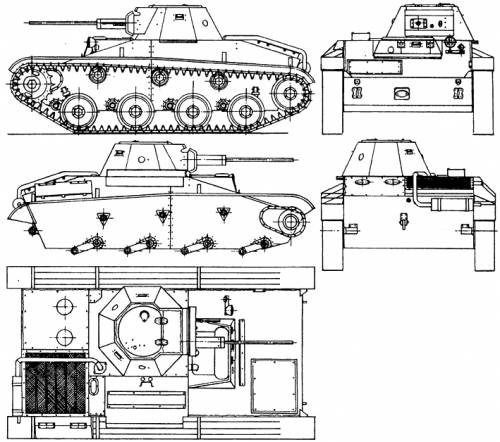 A technical drawing of the T-60. 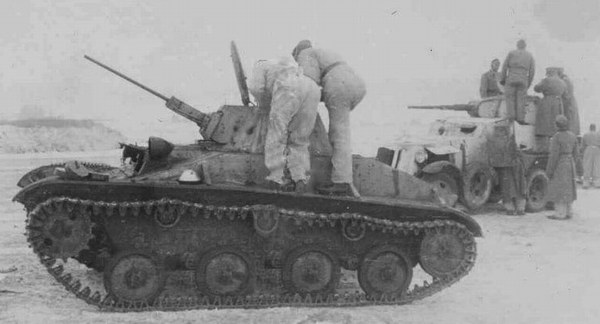 A reportedly German winterized T-60. A BA-10 is in the background. 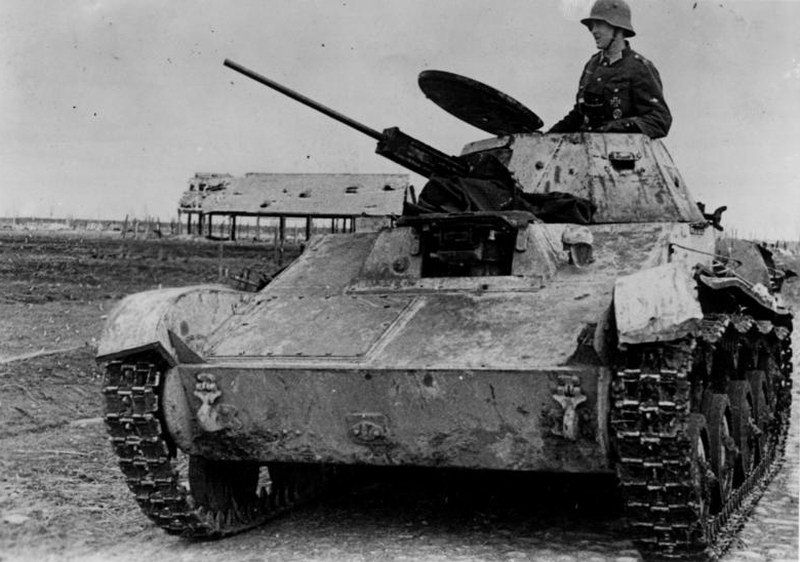 A German soldier poses inside an abandoned T-60 tank, spring, 1942. 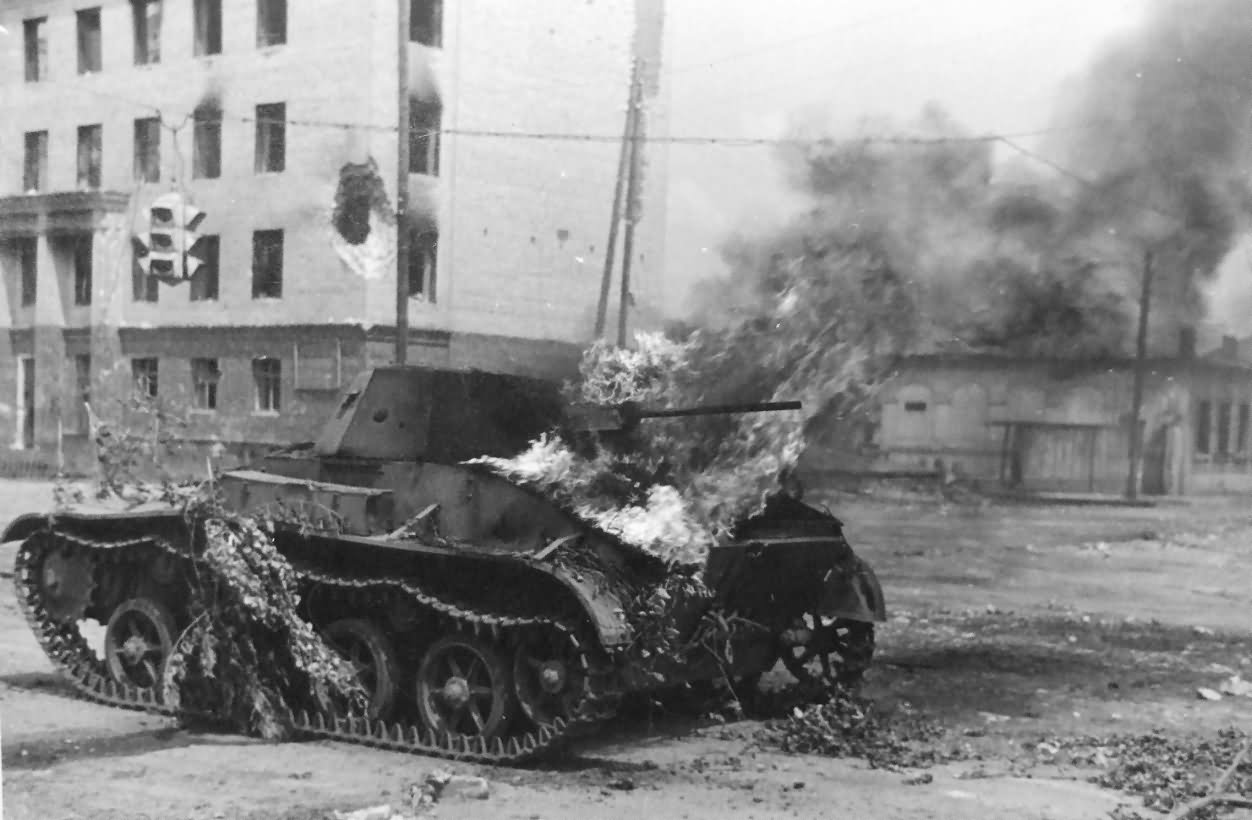 A T-60 burns in a street. The armor was simply too poor. 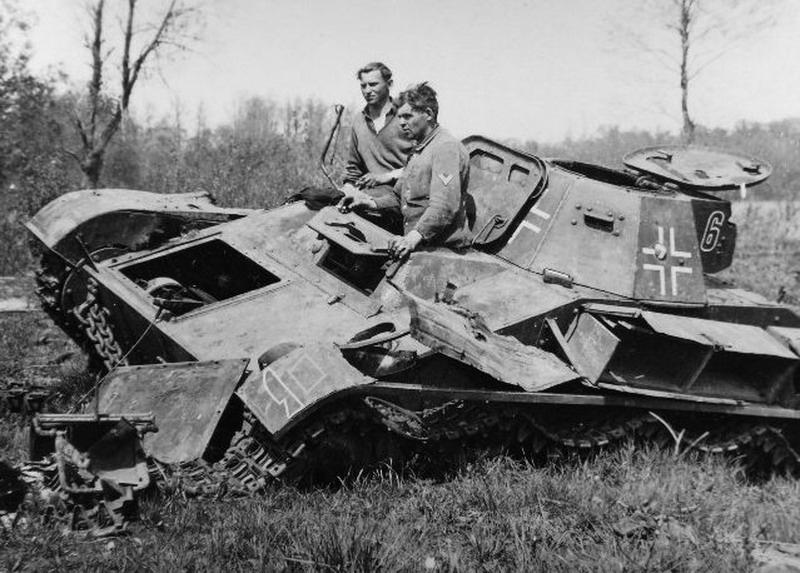 A knocked out T-60 in Wehrmacht service. 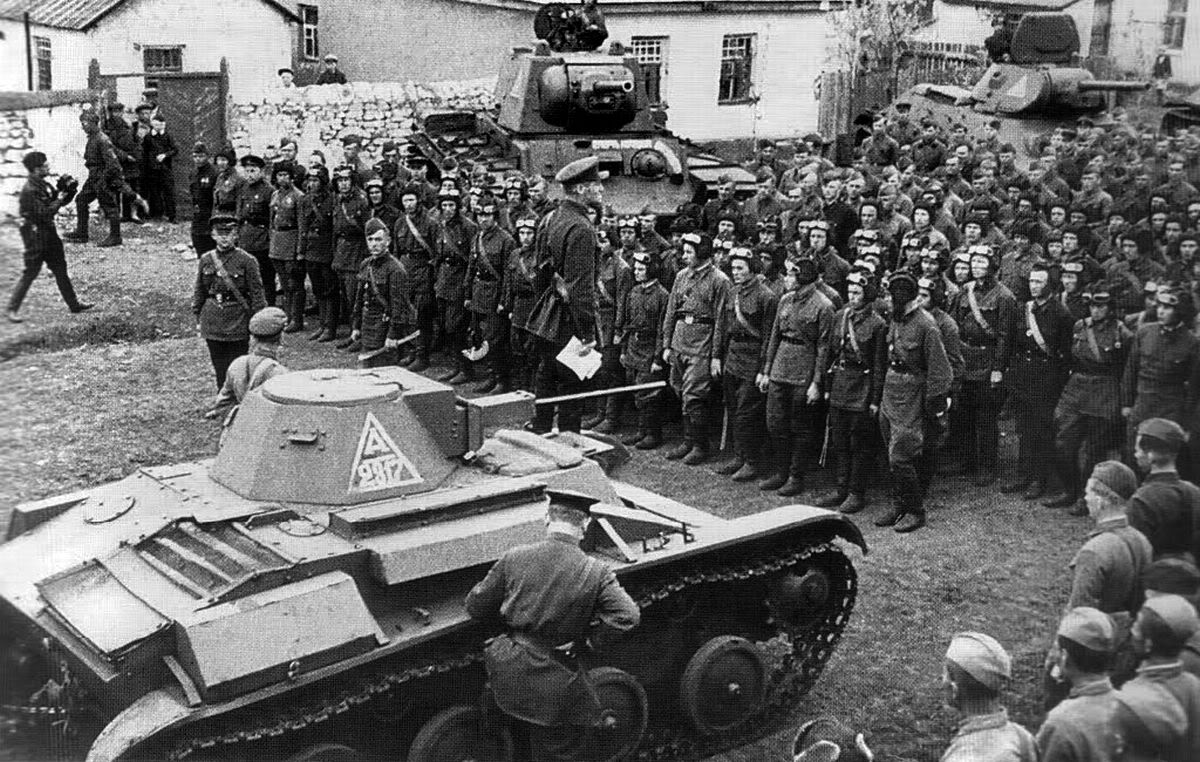 A Commissar stands next to a T-60 whilst giving a speech to Soviet tank crews in May, 1942.