A new airborne IFV for Afghanistan

In Afghanistan, the Soviet Forces deployed both the BMP-1 and BMD-1, armed with the same low-pressure 2A28 "Grom" 76 mm cannon and 9S428 ATGM launcher capable to fire the 9M14/M/P "Malyutka" (NATO Sagger) and PKT MG. This was potent combination, yet they had been made for the Northwest European plains, not the ultra-rugger theater of operation they were committed. Ambushed from above, like in an urban theater, they fell easy prey to RPGs, and their armment was not able to elevate enough while their PKT was too light and their missile inadequate for this type of warfare. In short, the Soviet head of staff soon saw the need of a vehicle with a fast-firing light cannon. In 1981, the war has dragged on for two years already when units started to receive the new BMP-2 IFV, a welcome addition with its 30 mm 2A42 multi-purpose autocannon. It has the high elevation angle required, range, power and rate of fire to match insurgents.

In case they stumbled upon armoured vehicles, the BMP-1 pintle-mounted 9P135M-1 ATGM launcher had a semi-automatic control (SACLOS) firing accurately the 9M113/M "Konkurs" (Spandrel), 9M111 "Fagot" and other ATGMs, much more effective and reliable. Reports praising the BMP-2 in action trigerred the high command of Soviet airborne forces to ask for an airborne adaptation of the BMP-2, which became the BMD-2. The BMD-2 (Boyevaya Mashina Desanta, 2) thus became a Soviet airborne infantry fighting vehicle, to gain time, based heavily on the BMD-1, but with a new turret and hull modifications. It was deigned as a replacement of the BMD-1 but failed to replace it only in scale, as the USSR breadown prevented to continue the production. Ultimately NATO gave the BMD-2 the designation BMD M1981/1. Only around 2,500 or less has been estimated to be delivered by the Volgograd Tractor Plant until 1990. Production never restarted in Russia and instead the BMD-3 developement was completed and production started (a much larger vehicle, close to the BMP-3), and the BMD-4 in the 2000s.

The design of the vehicle was given to Arkadyi Shabalin team at the Volgograd Tractor Plant. At first it was thought rightly the BMP-2 turret ould never fit on a BMP-1 hull. It was decided to design two vehicles, the first was urged to be sent to the airborne (IFV) by simply modifying the BMD-1/BMP-1 turret, with the same armament as in the BMP-2, and the whole fitted on a standard BMD-1 hull. The second vehicle was supposed to be much larger in order to fit the BMP-2 turret. This one will eveolved into the the BMD-3, just as USSR was about to collapse. In the end, the first variant of the BMD-1 was developed in 1983, incorporating the newly designed B-30 turret, but it was quickly found the hull needed some modernization as well. After tests with the 30 mm 2A42 multi-purpose autocannon and new 9P135M-1 ATGM launcher were performed, plus field trials, the BMD-2 entered production in 1985. 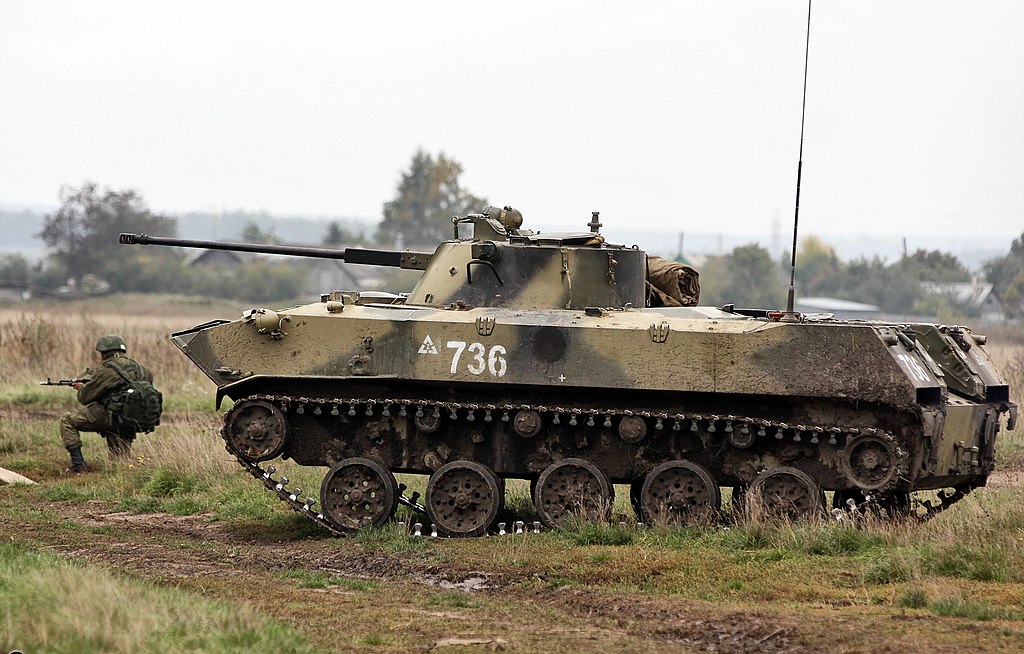 Overall, the BMD-2 suffered from the same compromises made for the BMD-2, it is lacking protection and is extremely craped, in order to save weight, its sacrifices crew comfort. Being much smaller than the BMP-1 and BMP-2 it could only carry five infantrymen including the commander, its bow machine gunner and three soldiers seated just behind the turret. They exited via a trap above them, in front of the engine, having some protection from recesses around the engine ventilation grilles. The vehicle had three periscope vision blocks for the driver, three on the sides and rear for the fightiong compartment as well as three firing ports, on either side and rear. For communications, the BMD-3 shifted from the R-123 to the R-123M radio set. The commander no longer operated the left bow-mounted 7.62 mm PKT MG, removed after trials as distracting him. As customery for Soviet vehicle, the central driver persicope could be swapped for an IR vision block and a white searchlight is mounted in front of the turret. The latter is the B-30 modle, tailored for the vehicle, larger, roomier and heavily modified. It made the BMD-2 subtantially heavier than the BMD-1, from 8.3 to 11.5 tonnes.

The goal of the BMD-2 was to be carried by the same range of aircraft than the BMD-1. Like the former, it could be airlifted by the An-12, An-22, Il-76, An-124 airplanes and the Mi-6 and Mi-26 helicopters. Like the former, it was launched by using a parachute cradle, the the PRSM-915 developed for safe landing. The BMD-2 is lowered on a special pallet before takeoff, a drogue chute is released to drag the pallet sonwn to the opened ramp in flight. Once in flight, a single large main chute opens which triggers the deployment of four long rods hanging beneath the pallet. As soon as they touch the ground, a retrorocket fires to slow down the BMD at 6-7 m/s ensuring a softer landing. It was safe enough tha the vehicle carried directly the driver and gunner. As soon as the infantry was on the ground the vehicle was operational in a couple of minutes and could pick up the parachuted infantry nearby. Basically this system developed for the BMD-1 was used on the BMD-2, with some minor improvements, like the rocket rods, ground proximity detector and parachute. It was unique to USSR and still is used by Russia, faithful to its 1930s "deep battle concept" when airborne use was theorized. 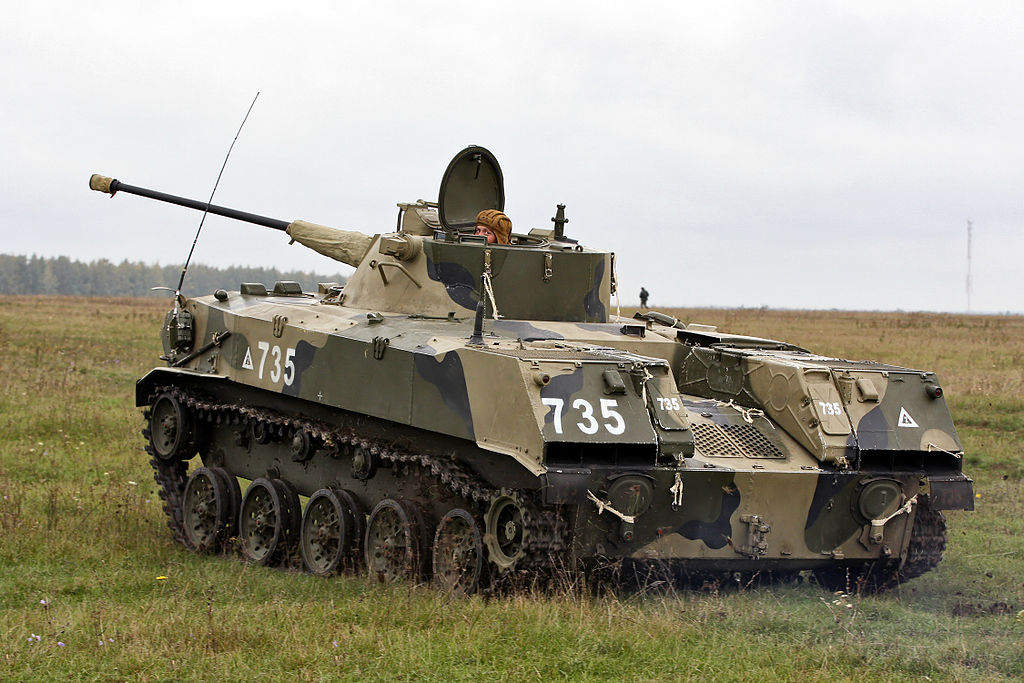 To fit in about the same hull, the BMD-2 carried the same, modernized engine, the 5D-20, 6-cylinder, 4-stroke, V-shaped, liquid cooled 15.9 liter diesel. Its output was 241 hp (180 kW) at 2,600 rpm and it produced a power/weight ratio of 21 hp/tonne (15.7 kW/tonne). The suspension and drivetrain was the same, with torsion bar and five light stamped roadwheels, four return rollers, rear drive sprockets and front idlers. Maximum road operational range was 450 km. For mobility, the BMD-1 is fully amphibious and can swim after switching on the two electric bilge pumps and erecting the two-parts trim vane plus switching the driver's standard periscope for a swimming periscope tht can be raised over the trim vane. Thanks to the suspension adjustable to be lower and be air-dropped its ground clearance range was between 100 mm to 450 mm. Top speed was 80 km/h on road, 40 km/h cross country and 10 km/h when swimming. 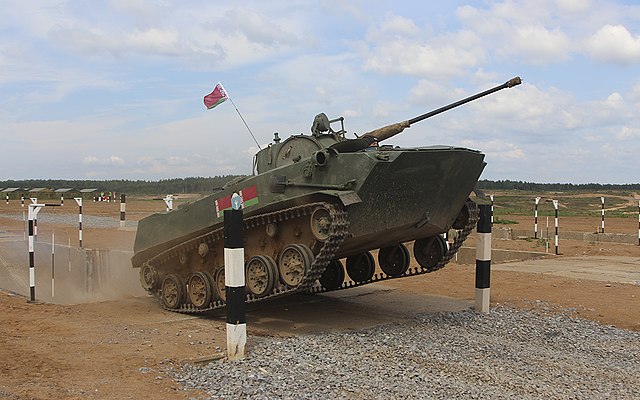 Since the turret was about the same as the BMD-1, protection was very light. The hull was made of welded aluminium alloy (stronger than standard aluminium, with hardened face) with an armour thickness at best 7 mm (0.27 in) on the turret face and sides, 15 to 17 mm (0.6-0.7 in) on the front hull glacis, divided into a 78° upper slope and 50° for the lower. Armour was 10 mm (0.39 in) on the rest of the hull so the vehicle was just resistant to small arms fire and shrapnel as most APCs.

The vehicle was reserved to the VDV, but after the Soviet collapse, it was passed on successors states, Russia (849 in active service, 1,500+ in storage 2013), and Ukraine (78 in the 2000s). Needless to say, the crews preferred by far the BMD-3, roomier, better protected and better armed. But the BMD-2 is small enough to ba carried by some helicopters, like the Mi-26.

From 1985 to this day, the BMD-2 saw service mostly in Afghanistan (single test deployment in 1985-88), Chechnya, Ossetia, and Ukraine (Donbass conflict) apparently on the Ukrainian side, and captured by pro-russian militias. As o today, in Russia there were About 849 in active service, and more than 1,500 in storage as of 2013. Ukraine was the second largest operator with 63 in 1995, 78 in 2000 and 2005. According to warfare.be site, here were active deployment areas and units of the BMD-2:

Unidentified camouflaged BMD-2 of the VDV

BMD-2 of the Ukrainian Army during a 2014 parade in Kiev. Note the "digital" pattern camouflage

Ukrainian BMD-2 during the Ukrainian crisis, 2018 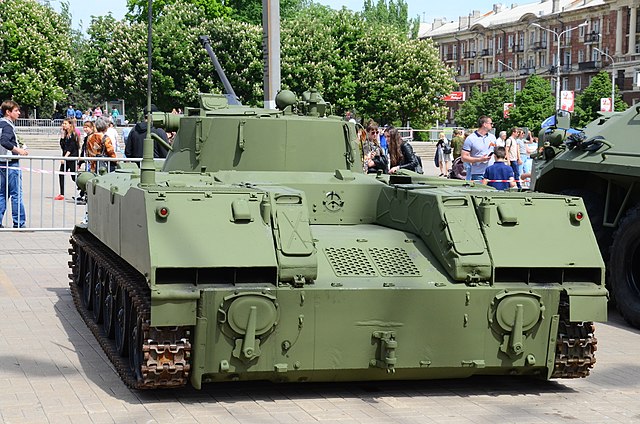 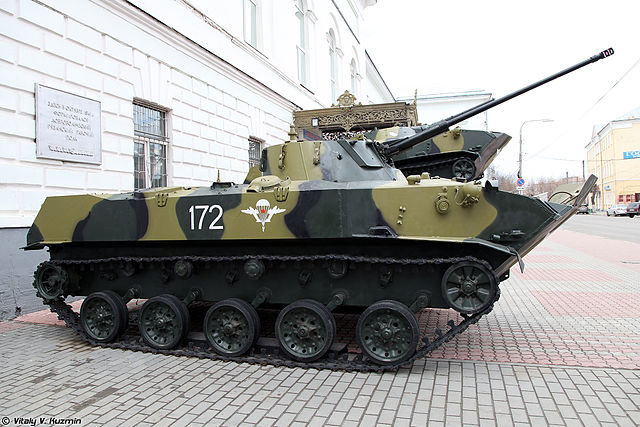