The company was founded in 1918, integrating the local McLaughlin Motor Co. stock. based at Oshawa, Ontario and was historically one of the largest and most powerful corporations in Canada, the third largest at least until 1975. It was the number one provider of Automobiles inside Canada before the war. So the company was well-placed to shift for a military mass production, and the case erupted with ww2 when a specification came from Great Britain, open to all commonwealth Nations, for a light reconnaissance car. In 1941, the company procured itself the Humber LRC Mark III blueprints and started working on an adaptated design.

The Otter was obviously not a simple carbon copy of the Humber LRC. Although the latter had a 4x4 drive (from the Mk.III), a sloped armor body, and a small turret, the Otter had a stubby nose with a more capable engine in it, a sloped roof, and a very characteristic "tail". The hull section was at the widest just behind the side doors of the driving compartment, before the fighting compartment. It had a better ground clearance, a shorter wheelbase, and was 33 cm higher. Protection was 12 mm on the front, and 8 mm on the sides. The Otter was based on the Chevrolet C15 Canadian Military Pattern truck chassis, with GM parts. Only the armament was provided by Great Britain, consisting of a Bren 0.3 mm LMG, located in the small dome-like turret, and a Boys cal. 0.5 AT rifle, fired from the co-driver seat. The Otter overall weight was 4.44 tons, much higher than the 3.40 tons of the Humber Mark III, and this reduced its top speed and agility, although its off-road capabilities and overall performances were still acceptable.

The prototype was ready in early 1941, and was accepted as the Car, Light Reconnaissance, Canadian GM Mark I. Production started at GMC Canada in mid-1942. It lasted until 1945, when 1761 machines had been delivered. Of this mass, only 1000 found their way inside operational units, the rest was kept in Canada for various duties and training. It is also known as the "Mark I" by default. There was no known variant other than field conversions like the RAF 20 mm armed versions.

The Otter was one of the main reconnaissance armoured cars of the Canadian armoured units during ww2, soldiering in Sicily, Italy, Normandy and the low countries. It was also in service with the British RAF and some armoured regiments. British vehicles were also deployed as AA protections with a 20 mm oerlikon mounted in place of the turret. After the war, Surplus were sold to the Jordanian Army, some of which apparently ended in the hands of the palestinian Arab Liberation Army and the Arab legion whioch saw extensive combat in 1948. Some were recaptured and possibly saw briefly service with Israeli militias. The Dutch Army also bought the Otter in substantial numbers, which saw combat during the Indonesian Revolution of 1945-1949. Surviving vehicles could be seen now at the Karl Smith Collection in Tooele, Utah and at the RAF Regiment Museum, Honington.

Links about the Otter AC 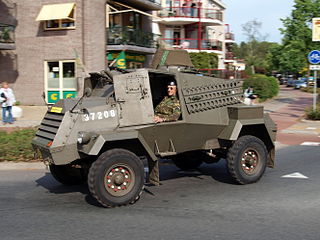