The previous M13/40 was the first and main Italian medium tank in 1940-41, and had some interesting features and solid assets. Firstly, it was equipped with a fully traversing turret fitted with a high-velocity 47 mm (1.85 in) gun, and twin-Breda 7.9 mm (0.31 in) hull-mounted machine-gun, a coaxial one in the turret, plus a fourth AA light machine gun that could be mounted on an external, removable pintle on the turret's roof. This model also had superior armor compared to the M11/39 and all previous Italian tanks, and good range, thanks to its FIAT diesel engine. But the crews complained about some finishing details, mostly the fragile riveted hull, about the limited speed and some lack of punch of the main gun. In all, 695 were produced, plus 34 command radio versions and many heavily-armed Semovente SPGs derivatives. FIAT-Ansaldo was asked to upgrade the model in several ways, but first, a new engine was proposed, which could be quickly adapted and added to the next batches delivered, as production concerns were paramount.

Eventually, the set of changes would be rather limited in scope, contrary to previous expectations. Due to the delays imposed by upgrading the main gun and changing the turret design, it was chosen to improve the engine and protection, with a better hull construction. Riveting was used less, the overall quality of the frame and final assembly were also improved, and details of the hull were redesigned. The hull differed in the shape of the casemate, especially were the twin machine guns were placed, while the mudguards were extended to the whole length of the tank and for the right side of the hull received a rack door. But the raison d'être of this model was the new, more powerful diesel engine, the water-cooled Fiat SPA 15T V-shaped 8-cylinder, 11980 cc, dispensing 145 hp at 1900 rpm.

The new engine received new radiator grilles, with fins oriented parallel to the main axis of the tank, one of the few external differences. It also introduced a new lever for mud driving, a reworked wheel drive and other improvements concerning the electrical system. The main armament and its layout was identical, with a Bredacannon 47/32 Modello 1935 and coaxial Breda 38 machine gun, a twin Breda mounting in the hull and a fourth machine-gun that could be installed on a pintle located on the turret roof for AA defense. Eventually, this model ended as a compromise aimed at producing tanks at the same rate without any big interruption. However, this policy had dire consequences in the long run, since this model was barely improved compared to the M11/39, regarding the chassis and other details. By 1942, innovation in the tank design had moved fast forward. 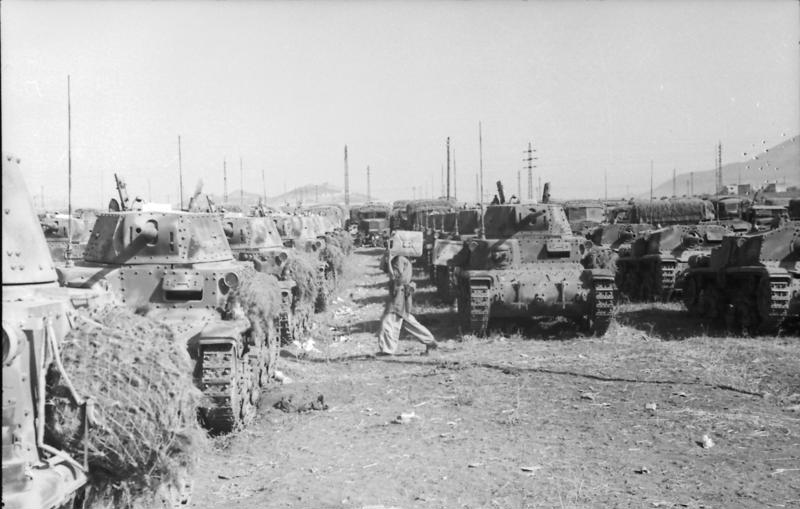 The first unit to receive the M14/41 was the Xth Battalion of the 133rd Armored Division "Littorio". Afterwards, it equipped the 132nd Infantry Tank Regiment, the Ariete Division, followed by the IVth to XIIth and the LI Battalion, 133rd Infantry Tank Regiment attached to "Littorio". It was also assigned to the fourteenth and the seventeenth battalions of the 31st Infantry Regiment of the Centauro tank unit, and the fifteenth of the 1st Infantry Division "Superga". These units fought until the fall of North Africa, except for the XIIth Battalion, whose tanks were sunk during the crossing of the Strait of Sicily. Battle honors included the two battles of El Alamein, the defense of the Mareth Line, the victory at Jebel bou Kournine against the British on 25 April 1943, and all the Axis operations until until May 8, 1943.

Other M14/41s were assigned to the sixteenth and eighteenth Mixed Battalion stationed in Sardinia. Reception by the crew was doubtful at first. But, during the hard-fought battles, the shortcoming of these model all but became apparent. It was notoriously unreliable, cramped and caught fire easily when hit.

As a result of the Armistice in November, while other models were captured and massively reused by the Germans, only a single M14/41, designated PzKpfw M14/41 736(i), was retained. The M14/41 was more widely used by the National Republican Army instead, especially for anti-partisan warfare. Some M14/41s were found in one of the last battles of the war, on April 26, 1945, when two of them plus two L40s of the "M" Lioness unit, under the command of Lieutenant Arnold Rinetti, held in check, for three hours, American tanks at the gates of Piacenza. - The M14/41 Centro Radio (M14/41CR) In addition to the standard AC radio Magneti Marelli RF1, this model received the long range RF2. The antennas were mounted on the left side of the hull, and it was possible to bring them down from the inside of the fighting compartment, to allow the free rotation of the turret. 34 were produced, two give to each battalion. After the armistice, these were used by the Germans as the Pz.Bef.Wg M41 771(i).

- The Carro Comando Semovente M41 was the main SPG command version. The turret was removed and the ring closed by a four-part hatch. Its armament consisted of a Breda Modello 31, 13.2 mm (0.52 cal) machine-gun in the hull, in place of the twin machine guns. The equipment was completed by the two RF1 and RF3 CA M2 radios. These were assigned to the self-propelled units (two for each batteries and a spare one). The Wehrmacht reused them as Panzerbefehlswagen M41 771 (i).

- The Semovente M41 was the logical evolution of the first M40, with the new Fiat engine.
- The Semovente Controcarro M41M was a very efficient SPG, equipped with the standard 90 mm (3.54 in) Italian AA gun, inspired by German heavy SPGs. However, the M41 chassis was heavily modified to cope with the recoil and weight of the gun, and the crew completely lacked protection. In all, only thirty were built in 1942.