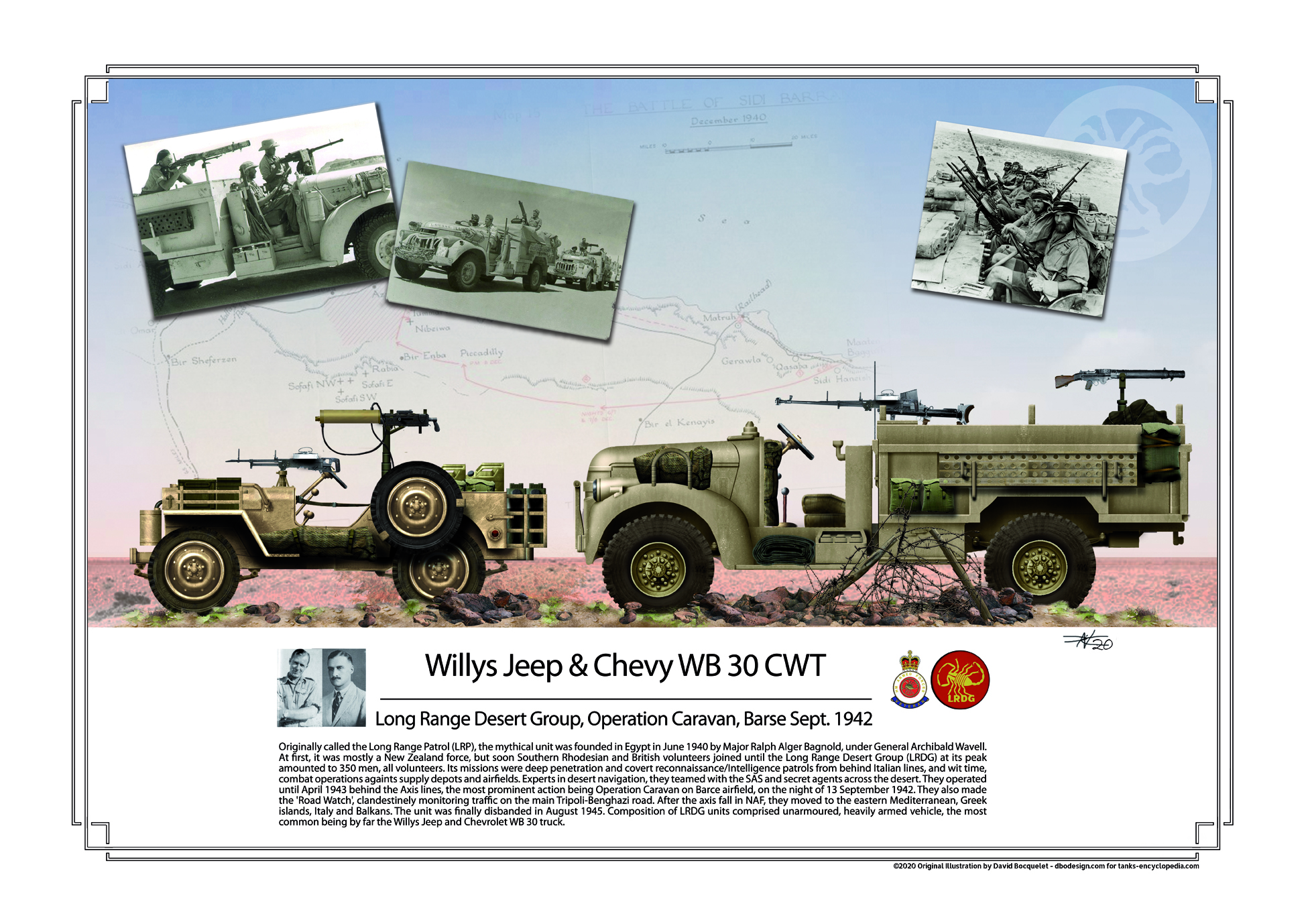 LRDG: Chevy CW.30 and Willys Jeep, Operation Caravan, 12/13 Sept. 1942 – Originally called the Long Range Patrol (LRP), the mythical unit was founded in Egypt in June 1940 by Major Ralph Alger Bagnold, under General Archibald Wavell. At first, it was mostly a New Zealand force, but soon Southern Rhodesian and British volunteers joined until the Long Range Desert Group (LRDG) at its peak amounted to 350 men, all volunteers. Its missions were deep penetration and covert reconnaissance/Intelligence patrols from behind Italian lines, and with time, combat operations against supply depots and airfields. Experts in desert navigation, they teamed with the SAS and secret agents across the desert. They operated until April 1943 behind the Axis lines, the most prominent action being Operation Caravan on Barce airfield, on the night of 13 September 1942. They also made the ‘Road Watch’, clandestinely monitoring traffic on the main Tripoli-Benghazi road. After the axis fall in NAF, they moved to the eastern Mediterranean, Greek islands, Italy and Balkans. The unit was finally disbanded in August 1945. Composition of LRDG units comprised unarmoured, heavily armed vehicle, the most common being by far the Willys Jeep and Chevrolet WB 30 truck.

Start your collection and support us !…

Since 2014 David Bocquelet released a handful of tanks posters, mostly on ww2-related topics. In 2018 others will follow. These posters help us to host the website and create new posters (one poster on average can take 6 hours or more, not including the work performed on the illustrations themselves! That’s teamwork as entries in a poster are a matter of team debates and balancing decision to include or not some models/variants, etc.

In addition, we can provide true HD printing versions which can be .Tiff or .Bmp, converted to CMYK. The very large versions available for wall posters (2 m x 3m and more !) can be sent, at around 500 mo, .tiff CMYK format. Contact us! Also now on ArtPal Example: Lately a dozen south african armpred vehicles from the Bush war were released and it’s not over yet. 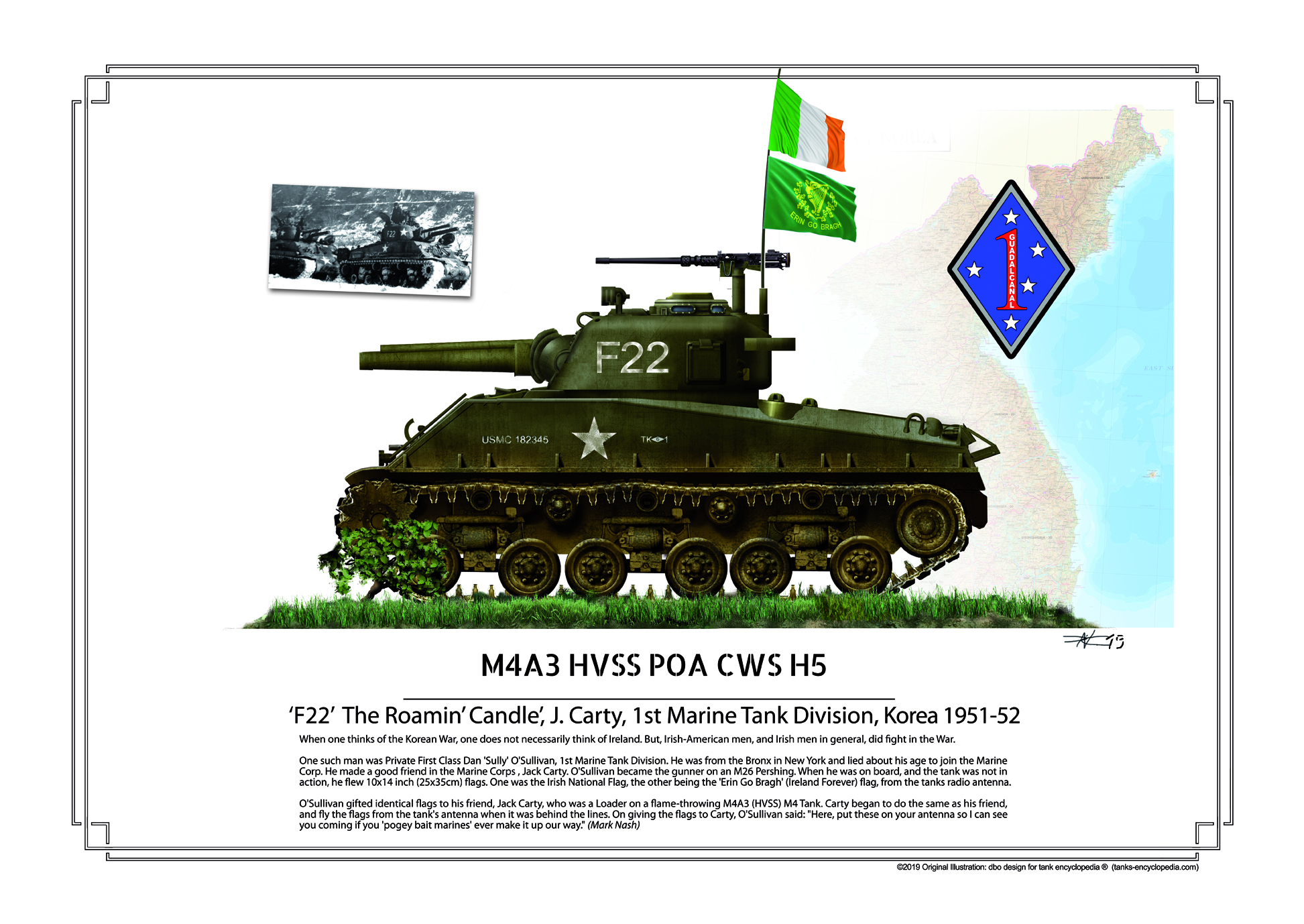 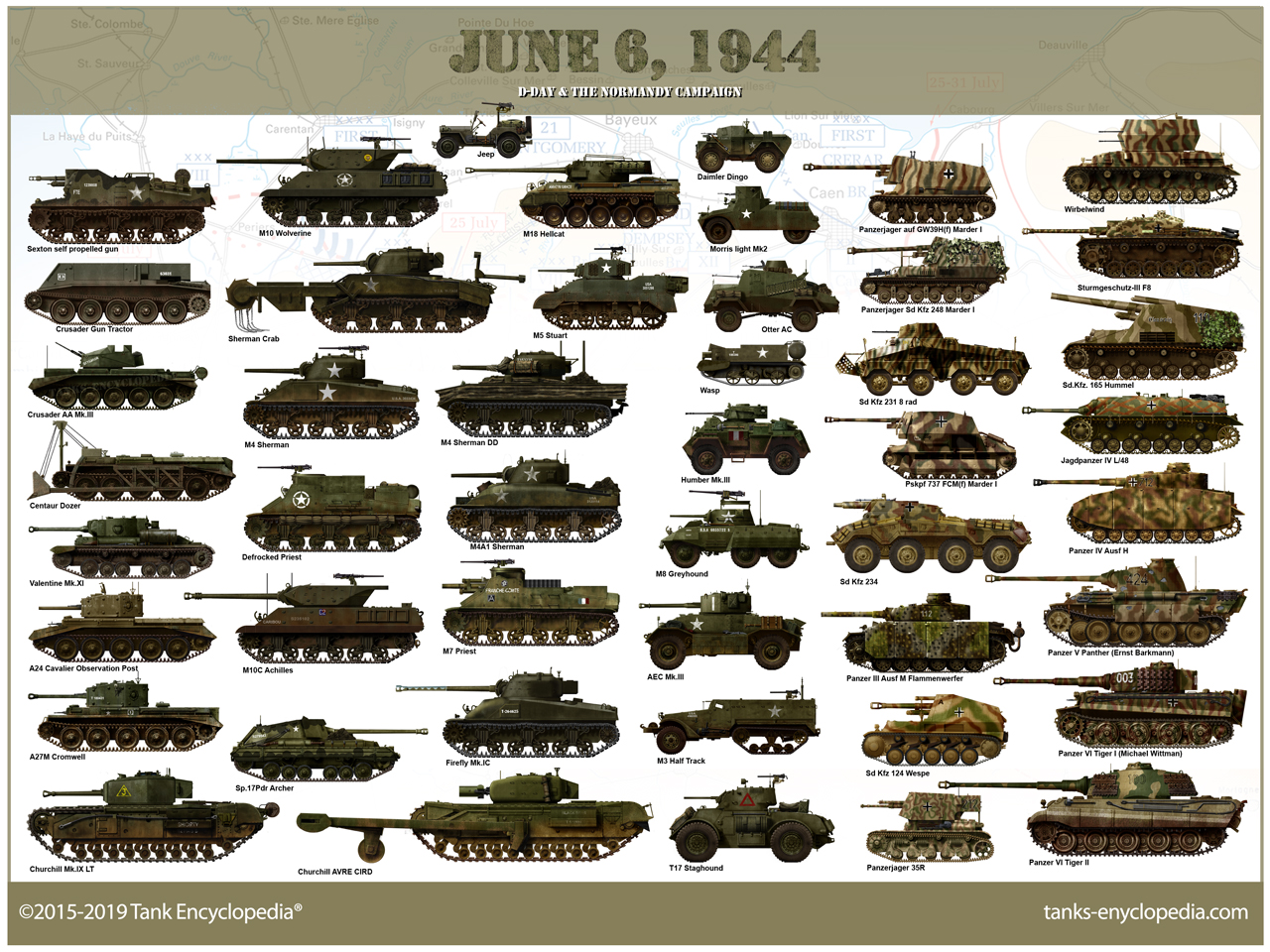 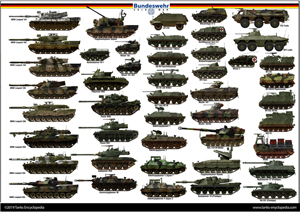 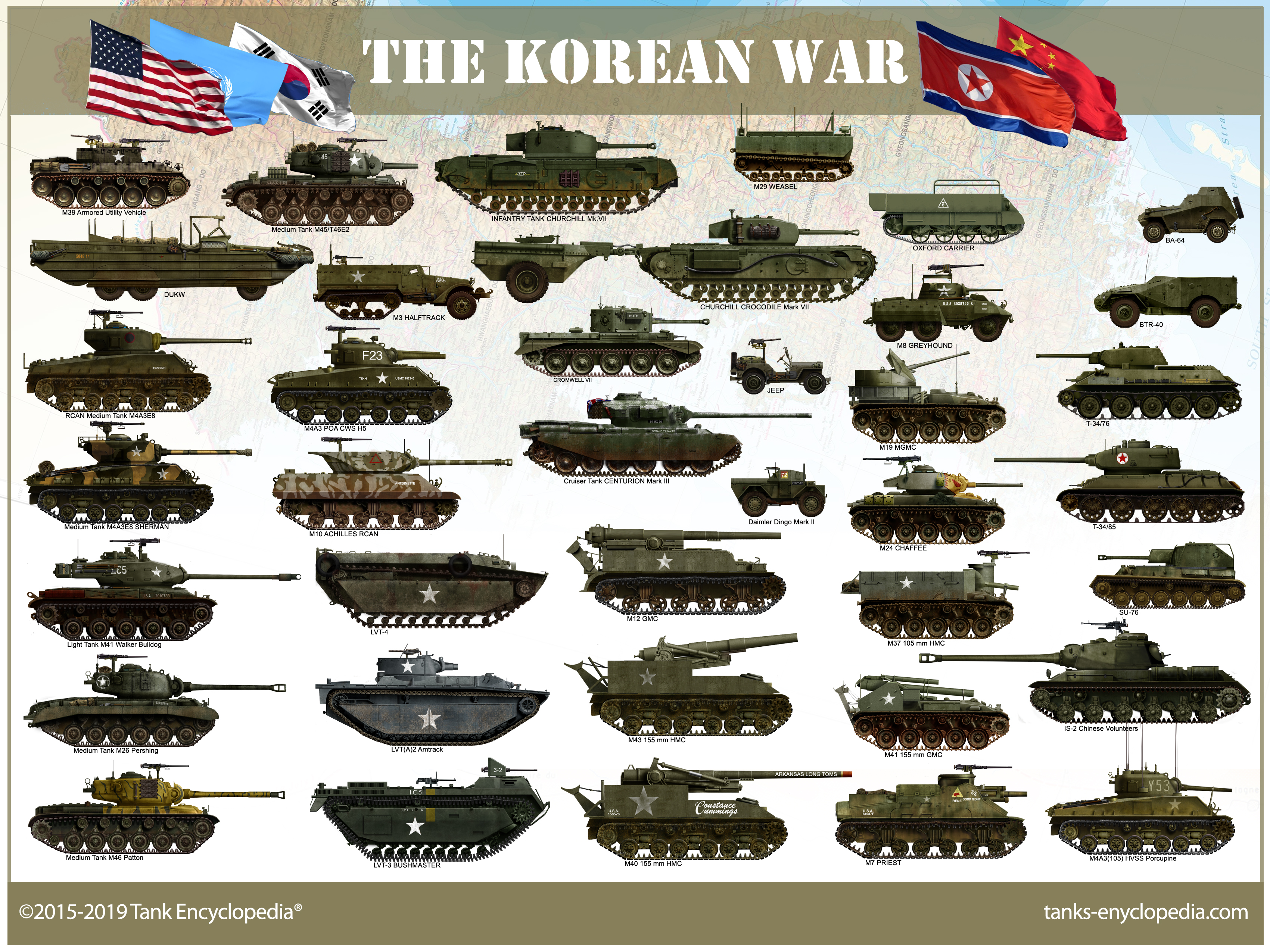 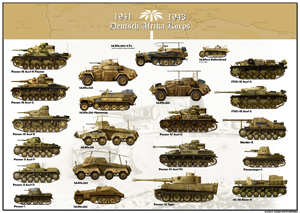 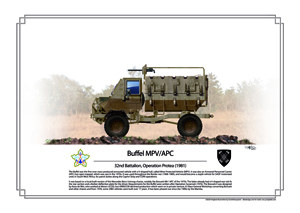 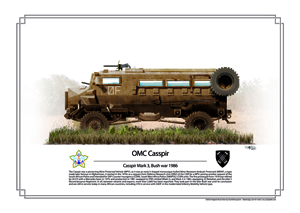 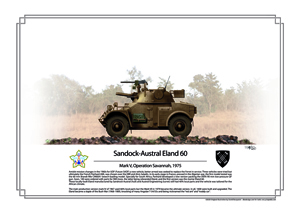 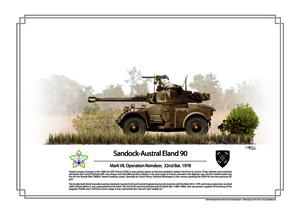 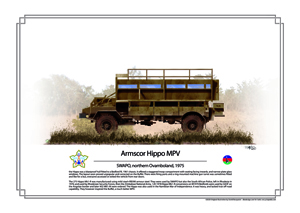 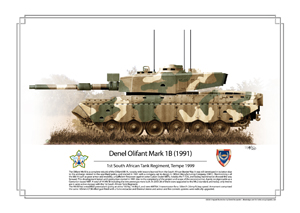 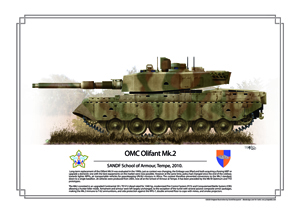 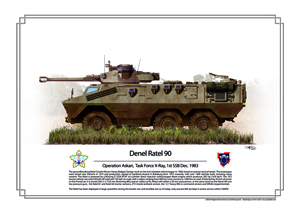 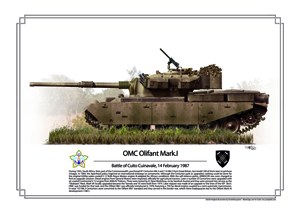 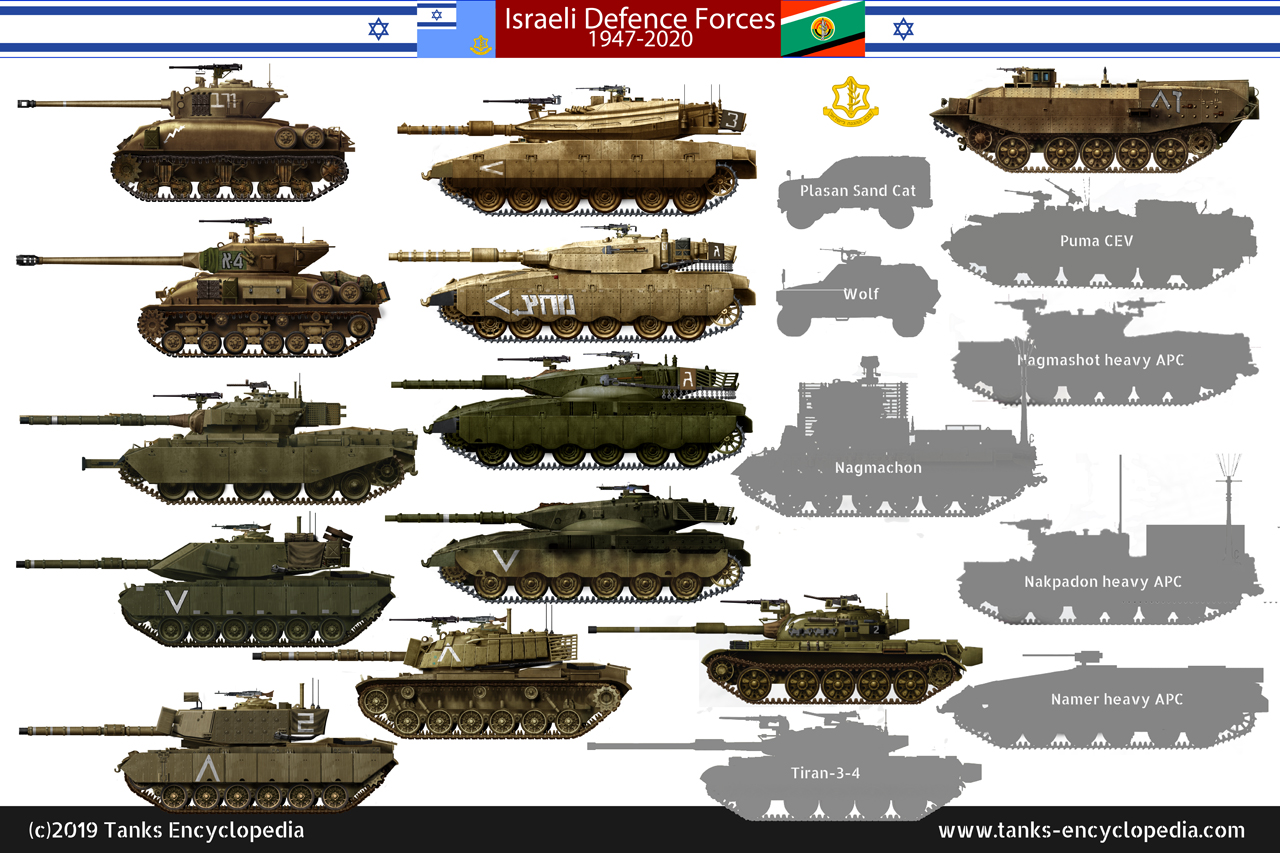 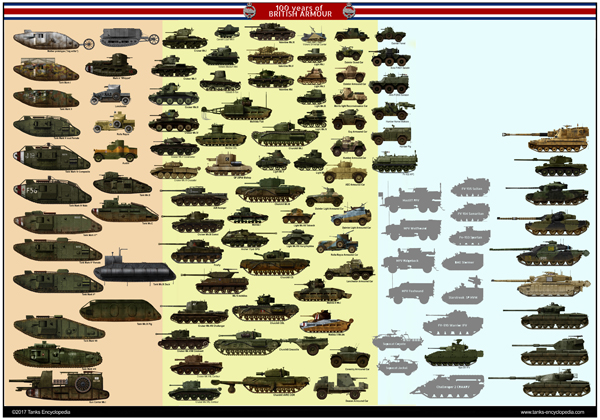 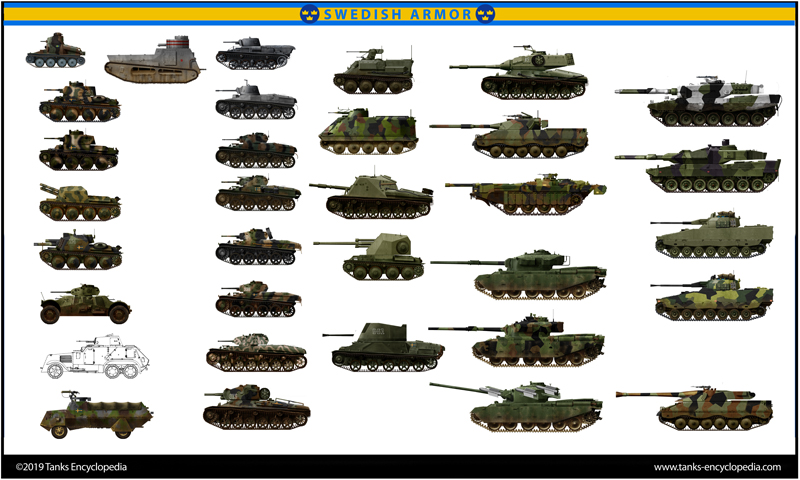 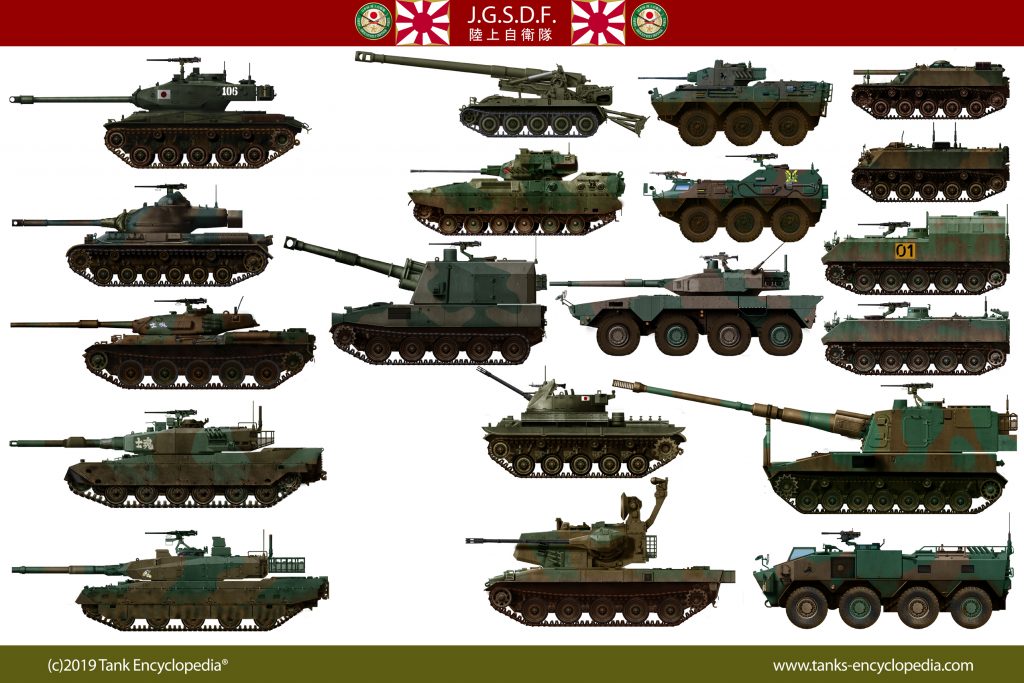 please do a individual poster on the al khalid tank

Please do a poster of the Mark I!

we’ll take a look at the idea, perhaps a limited run for Cambrai Day this year

Things have become so distributed between the equipment to put any image on clothing and the availability to produce and deliver it that it’s possible to do one-off T-shirts for not much more than making a lot (it might even become cheaper when unsold merch comes in but I’m too lazy to do the math, all I know is unsold inventory is a PITA.)

I’d buy one with an M43 Ambulance painted in Ohio National Guard (Toledo/Findlay) markings circa 1970 any day, there’s a funny story to go with it.

Hello Chuck, if you check Red Bubble you’ll see a large array T-shirts available with all the posters already produced. But making one-off models could take quite long and margins are quite low… But if one day ‘im venturing into this one, you’ll be the first to know
Cheers,
David

Have you seen this article from the London Daily Mail

I’d love to see an individual poster of one of the heavily modified easy eight shermans, like thunderbolt 7 or perhaps cobra king. They are handsome to the point of being princely.

We shall suggest this to the artist.

Duly noted, that’s already on the tubes. Indeed both deserve a poster.
However, and it’s a general note, does anyone have an idea of who were the british/Commonwealth top tank ace ?
By default i’m preparing a poster on Corporal Alfie Nicholls of the 9th Lancers and another on Sydney Valpy Radley-Walters
Any ideas are welcome !
Cheers; 😉

please make one for the m10 panther erzatz

can you do a swedish armour poster?

Can you please do an individual poster of the IS-7?

I personally enjoy Cold War tanks, you should do more!

As you are a Soviet Connoisseur i do believe that you will appreciate the cold war soviet armored vehicles arsenal which is just out.
Cheers !

When will the poster on cold war Soviet armour be up for sale?

Done ! Check the poster page…
I know it was quite long in the making with just a few models missing, like the giant SPG Condensator and other Soviet self-propelled guns, or the Shilka SPAAG, BMD-2 and BTR-D. But i’m glad it’s at last available. Next: Global British, Cold war British, Cold War US, modern Russian, Modern Chinese, global Swedish and Bundeswehr are on the tubes.

If possible, an individual poster for the BTR-70 would be kinda nice I guess.

Hi, Could you tell which Windows graphical software the creator of these poster used? Adobe Photoshop? Gimp? other?

Hello Alex
Both photoshop CS (just because 5.0 did not managed .png files and layers groups) and Gimp were used.
Best,
David B. TE Manager

Hi guys, just spotted a slight error on the new Cold War tanks poster. The captions on the Type 61 and Type 74 appear to be the wrong way round i.e, the Type 61 has the Type 74 caption under it and visa-versa.

Message relayed to the illustrator. Thank you for bringing this to our attention!

Fixed ! Thanks for spotting it Adam !
David B.
TE Illustrator & Manager

No probs, great posters by the way. Keep up the good work.

How about one on narco tanks

Too much work for a very reduced “market” (but perhaps the cartels ? haha) sorry
Although im doing that by passion; sometimes a single illustration can require 7-8 hours of work, so any poster needs to be sold at least twenty time to start being profitable by any margin. Plus im “working” for people that scan prints to be reprinted in China and sold in alibaba and amazon at ridiculous low prices on crap paper. That’s also a brake on this activity. BTW on improvized AFVs, we also have in the tubes since at least four years a project on ISIS Iraqi and Syrian improvized AFVs. Perhaps i should start a patreon on this one, like for North Korea and Iran…

Keep up the good work

Hello Staedtler
Duly Noted !
Since i’m not long away for a global poster on Brazilian AFVs, would you be interested by this one too ?
Cheers,
David B

Can you make a individual maus, p1000 and/or the Schwere gustav (mainly maus please)

Will there be an individual poster on the Sherman jumbo ‘Cobra King’?

Hello Brandon,
After Creighton Abrams own Thunderbolt yes, the Bastogne’s Cobra King is next.

The Cobra King is out ! In fact it’s our special 75th anniversary of the battleof the bulge, on top of the poster’s page.
Cheers “Colonial”, David

Can you please create an individual poster for the IS-2 and IS-3? Thaks

How about a poster featuring some WW2 AFVs match-ups and rivalries? For each category (heavy, medium, and light tanks, SPGs, tank destroyers, etc) put the axis tanks facing the allied tanks in a poster. Here are some examples: King Tiger vs. IS-2, Tiger I vs. M26 Pershing, Panther vs. T-34/85, Panzer IV vs. T-34/76, Type 3 Chi-Nu vs. M4 Sherman, and so on. Perhaps, you can organize them by front too (Eastern Front, Western Front, North African Front, Pacific Front, etc)

The idea was submitted in internal, some time ago
I found a fan pic once made with tank encyclopedia’s illus with some reversed, opposing soviet and german ww2 hardware. That was the idea.
Can’t find the link anymore but it should be visible in google and pinterest wih the right keywords.
Why not if accompanied with explanations like in an infographic. However tank to tank comparisons are most often pointless. There are way too many parameters to consider and it’s often a waste of time to find real matches.
David B. TE manager

I had a hard time finding a reliable list of vehicles, do you have one ? BTW at least you can be sure i will do at least an individual poster of the T17 Staghound of the Brigade. Amazing story by the way.

Hello Didier, the T17 Staghound of the Brigade Piron is out: https://www.redbubble.com/people/thecollectioner/works/43141562-t17-staghound-brigade-piron
They also had Daimler ACs and variants of the Bren Carrier as far as i know

please do a poster on the bt 42

Yes please! I second this whole-heartedly, the BT-42 is an incredibly interesting piece of armor from WW2/ Continuation War. I would pay good money for this!

Hey! I love the posters and I am wondering if you would ever consider making a poster containing all Canadian WW2 tanks or all Canadian tanks throughout history?

Absolutely ! It’s already in the tubes (Like the ANZACs) – I will post it here in its current stage of completion. Chers !

Please make a poster of Yugoslav and Balkans vehicles

Please do a kv-2 individual post I really want one.

Hello Vaughn
Mind you i’m precisely working on a new poster serie people on Redbubble asked me for XMas. I can add the KV2, no problem at all.
I will update this comment when done
Cheers !

*nb: The poster page needs to be updated, better to go directly on red bubble.

Thank you, it looks amazing!!! Merry Xmas as well

Please do various chronological versions of the Tiger I, Panther and King Tiger.
As well as ALL the other German vehicles.

May I suggest that a poster of CPLAGF armor should be created? Including the ZBD-97/04/A and Type 07 SPG not mentioned on your website? Also, may I ask you to draw a poster of all Chinese variants of the Type 59? Many thanks!

Hi, very much a fan of the Russian Red Army and would love a tank poster.

Hello.
If possible, an overall poster of all PLA tanks and armoured vehicles since 1945 would be awesome.
And some tanks which are not mentioned on this website should also be painted, like ZBD-04/04A, ZTQ-15 lt, as well as ZSD-89 version II. And those heroic tanks such as T-34-85 No.215, Type 62 No.708 and Gongchen Type 2597 Chi-Ha can be impressing.
Many thanks.

Thanks. But unfortunately, there are some mistakes in this poster and most of the Chinese tanks articles and photos. Can I provide you with some domestic info which has been verified or proved, and help you improve or rewrite those articles in the near future? Thanks a lot.
By the way, is it possible for me to contact you through email? My email address is luoyefenfei0709@163.com .

Please do a poster on the Leopard 2a7 and the T-14 Armata.

Or maybe even better leopard 2a7V

It’ll be great since all of those tanks are my favorite Thanks!

And can you make a poster dedicated to the American ww2 tanks please? every single one of ww2 American tanks including prototype. Thanks!

Would love to see a poster comparing tank round sizes from WW2 (American, Russian, German). It might be interesting to see from WW1 to Cold War rounds compared in size.

Are any of these posters available for purchase?

All of them on RedBubble. Click any of them and you will be taken to the website.

Each and every of these is on the redbubble platform, my personal shop. I’m adding new posters monthly. If there is no button, just click on the poster itself.
Best !
-The author