Genesis of the Italian "Crusader"

At the beginning of WW2, Italian armored divisions were equipped almost 90% with L3 tankettes, of dubious combat value, as was shown in the following years. The M11/39 was a good start, although limited by its configuration, but the M13/40 and the following M14/41 and M15/42 were much better, although still hampered by their riveted construction and old fashioned leaf spring bogie suspension, which limited top speed.

After the first encounters with British Cruiser tanks, the idea soon emerged of a similar vehicle, in early 1941. Italians engineers did not have access to the Christie suspension patent, so the design was obtained after reverse-engineering a captured Cruiser Mk.III. Despite a weak armor, speed had a quality of itself, giving a sort of active protection. Since the M13/40 and following models could not match the top speed of the A13 Cruiser Mk.III.

An order to start the development of a similar tank was passed, which had to be faster and have a lower silhouette, for colonial duties. As it had to be designed with desert warfare in mind, the FIAT engine's cooling was reworked, with the introduction of tropical features, like sand filters and a new ventilation system for the crew. First mention of the M16 came from May 24, 1941, when the proposal was formalized by the Commando Supremo and validated by the Roatta Ispettorato Superiore di Studi (Higher Inspection Technical Research).On June 23, Ansaldo produced a full-scale model of the tank. Work on the intended 47 mm (1.85 in) gun 47/40 long barrel progressed at the same time. In August 1941, the project was upgraded and designated as the Ansaldo-Fossati Carro Medio Celere (later FIAT M16/43).

Its most distinctive feature was its four big road wheels suspended by Christie type vertical springs, two return rollers and auxiliary rollers in between. The hull was very elongated, with well sloped front and side plates. The overall empty weight was 13 tons, and there was a crew of four, including the commander, gunner and loader/radio operator located inside the turret. The SPA petrol engine delivered 275 hp, for an estimated top speed of 55 km/h (34 mph) on flat ground. 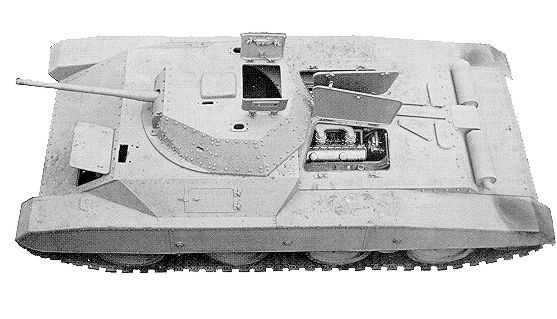 A wooden 1:10 mock-up was presented and construction approved by the Commando Supremo on August 13, 1941. It was already dubbed Sahariano. Despite its revolutionary design, there were still a few anachronisms, like the riveted construction and the main armament, the long-barrel 47 mm (1.85 in) gun 47/40 and coaxial single Breda 8 mm (0.31 in), still relevant compared to the British 2-pounder, but certainly not up to date with the current requirements of the front in mid-1941 and new developments of tank guns.

A 75 mm (2.95 in) gun was studied, but never implemented. Protection was sacrificed, with the greatest thickness (30 mm/1.18 in) on the front slope and 20 mm (0.79 in) on the turret face, figures no longer relevant, as shown by the poor battle performance of the Crusader. As production was delayed, a prototype was built only in the spring of 1942, when M4 Shermans were already equipping the British Armoured units. The Celere Sahariano became outdated, despite tests showing a top speed of 71 km/h (44 mph) was achieved. In July 1942 the project was terminated, as the more conventional M15/42, then in development, was given priority. The prototype was kept in storage and scrapped in 1944.