This project's genesis can be traced back to 1928, when the Imperial Japanese Army conducted a series of trials to test the feasibility of the amphibious tank concept. These included prototypes like the Type 1 "Mi-Sha", the SR-II Ro-Go or the Ishikawajima Amphibian. However, it was not until 1940 that the Navy took the matter in its own hands. The IJN devised a vehicle specifically tailored for the Imperial Navy's Special Naval Landing Forces, for assaulting small Pacific islands devoid of pontoons or harbor facilities, as well as special operations. The Type 2 Ka-Mi was designed in 1941 and production started in 1942.

Design of the Type 2 Ka-Mi

The designers choose the Type 95 Ha-Go as a base for development, keeping the engine, transmission, suspensions, drivetrain and chassis, although the hull and the turret were completely redrawn for the task. The plates were assembled by welding and rubber seals were used, instead of the usual riveted armor. Hollow pontoons made of steel plates were also designed to be fitted to the front and rear of the chassis, and could be quickly locked into place by hand. The front pontoon was divided into eight compartments, to reduce the internal flooding when hit. They could be easily jettisoned from the inside after landing. The engine transmission was modified to power the two shafts, providing a 6-knot speed on water (10 km/h), and a 150 km (93.2 mi) maximal range. The steering was provided by a pair of rudders, operated through cables running from the rear to the driver's compartment.

Because the top of the hull could be flooded on rough seas, barriers were placed around the engine exhaust grid. A removable chimney was designed to be fitted over the exhaust pipe, with a watertight seal. It was covered by a bell-like dome and could be removed after landing. A raised-up "bridge" was also fitted on top the the turret when navigating. The turret itself housed both the 37 mm (1.45 in) Type 1 gun and a coaxial Type 97 machine gun, protected by an armored mantlet. The Type 1 was a standard AT gun, which could fire a 0.68 kg (1.5 lb) AP shell at a muzzle velocity of 700 m/s (2,300 ft/s). A second machine-gun was located inside the hull, protruding from the frontal glacis. The tank had a bilge pump, the road wheels had drain holes, and the bell crank suspension was internal. It was also one of the few Japanese tank fitted, from the start, with a radio and telephone intercom for the crew.

Because most parts were hand-built and the vehicle was specifically designed for its task and never for mass-production, the demand always exceeded the manufacturing capacity of the Navy. Production spanned two years, 1942 and 1943. Other types of amphibious vehicles in use were the Type 3 Ka-Chi and Type 4 Ka-Tsu. The Ka-Mi was designed, initially, to assault islands. However, by the time it entered service, the Japanese forces were already on the defensive. They were used for infantry support, sometimes as moving pillboxes. Three formed the 1st Yokosuka Special Naval Landing Force based at Saipan, while two saw action in Leyte in 1944. They were affected to various naval garrison detachments in the Southern Pacific and East Indies. The USMC encountered the Ka-Mi when assaulting the Marianna and Marshall islands, at Guam, Aitape and Biak in New Guinea, and during the invasion of Leyte. Some sources claim that, off the coast of Leyte, USMC LVTs attacked and destroyed some Ka-Mis. Two survived to this day at the Kubinka Museum and on Palau island.

Links about the Type 2 Ka-Mi

A Type 2 Ka-Mi, with its floating pontoons and superstructures fitted. The Ka-Mi was the most prolific and successful Japanese amphibious tank of the war. However, with its complex configuration and costly manufacture, it was produced in few numbers and was a relatively rare sight in the Pacific.

Type 2 Ka-Mi without its flotation devices, Itoh Detachment, Saipan. This specimen saw combat near Garapan in 1944. 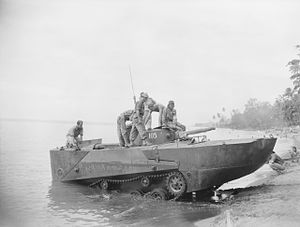 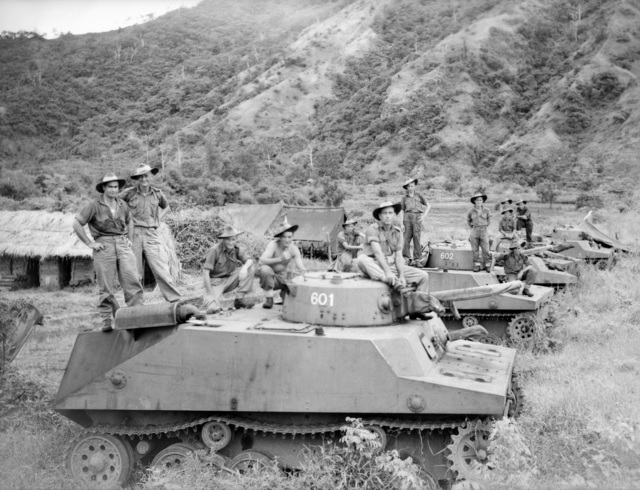 Some Ka-Mi tanks without their pontoons, captured by Australian troops. 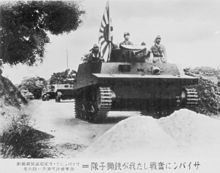