The last US heavy tank

The heavy type never encountered much success in the US Army ordnance due to an inadequacy to the extreme standardization set in motion during World War 2, and focused on the medium tanks. Although in theory they were needed to deal with the late heavy German tanks of World War 2, the only operational tank in Europe at that time, the M26 Pershing, was not even heavy enough to fulfill its missions. This served instead as a base for the new generation of Cold War US medium tanks.

However, after the end of the war, the Soviet heavy tanks became the new threat as these were designed to deal with the very same tanks and now were antagonized to their former allies. The IS-3 and IS-4 series have in common a strong frontal armor, sloped and 180 mm thick, and a 122 mm gun as a standard. That imposed a fitting answer by the British Army with the Conqueror, while the US Army, after a long line of prototypes, ordered the T43E1 in 1953–54 at Chrysler's Newark plant.

The T43E1 still have elements in common with the previous T29 and T30 (1945 - ten pilots built), which were still largely based on the Pershing for most of their components. By 1950, the HVAO tests with 90 and 120 mm ended with a more reliable gun, T122/123, and HEAT tests with the T153 ammo round were performed. By January 1953, according to the FY 1951 budget, 100.8 million dollars were allocated to the new T43 heavy tank design, later to be equipped with the T123 120 mm gun chosen in February. The same month, the T57 120 mm oscillating turret was ready for tests but was rejected. The T58 heavy tank with a 155 mm gun was also initiated. The T43 design was finalized in October as the T43E1, and in December, the production was initiated at Chrysler, lasting until June 1954.

In the meantime in April 1953, development of the new HVAP-DS 120 mm was resumed with the T102 and T106 ammunitions, and the T48E1 was publicly revealed at Aberdeen proving grounds. By October other parallel projects began with 120 mm guns, the T57 and T110 heavy tanks using evolutions of the T123, the T179, and T204, and the 155 mm T180 for the super-heavy tank T58. By December a large investment was initiated to improve the T43E1, with a step towards standardization.

By 1956, the T48E1 was standardized as the M103 and in four months between 1956 and 1957, the other parallel projects were terminated. By may 1957, the M103A1 standard was set up for the US Army, while in 1959, all running tank gun projects were terminated, including 90 mm guns, 105 mm smoothbore and new 120 mm models, however, the 105 mm rifled gun was maintained, later adopted by the M60. In November-December, the United States Marine Corp (USMC) addressed a memorandum for a comprehensive modernization of the M103A1 which would end in 1960. 3 M103A1 pilot models were then standardized to the M103A2, totaling 156 in service. Later a second batch of 52 would enter service with the USMC totaling 208.

The new design was formulated in 1948-1950 at the Detroit Tank Arsenal, based on the T34 heavy tank, but shortened and made lighter to increase the power to weight ratio (14.5 tons were saved). The driver was placed in the centerline of the bow, allowing better glacis designs. Engineer Joseph William in particular, worked on a new elliptical cast hull that would save weight while being optimized at all angles for maximum sloping effectiveness, saving thickness and therefore weight. The T122 main gun was derived from an AA gun, but 15% lighter while holding a much higher chamber pressure.

It was 60 calibers long and was found capable of firing e a solid shot Armor Piercing (AP) round at 3,500 ft/sec (1066 m/sec). As designated in December 1950, the new design was to be 58 tons combat loaded, with 5 inches(127 mm) of frontal armor, mantlet being 102 mm thick, but still capable of reaching 27 mph (43 kph) with its 810 hp Chrysler V12 Av-1790. As the M103 was developed alongside the Korean War, the project was hindered by budget cuts for the war effort, as well as fresh concerns of transportation and general logistics.

The very reason behind the M103 design was its long-range 120 mm cannon capable of hitting enemy tanks at extreme range, allowing the theory of decreasing the M103's hull armor, and therefore preserving mobility. The gun was derived from the T123 line of prototypes, standardized as the M58. In its configuration, this gun was able to score hits at 2,500 to 3,500 m with good accuracy, apparently achieved in its anti-aircraft role. 34 rounds were stored inside the hull and turret (ready rounds). In its final configuration (M103A2) the ammo range comprised the APBC-T M358, HEAT-T M469, HE-T M356, TP-T M359E2, and WP-T M357 shells. The rifled gun needed a separate-loading round, the projectile being loaded into the breech followed by its cartridge case (brass case, primer, propellant).

Therefore, there were two loaders present, in order to speed up the process. The spent brass cartridge case was ejected after firing. Secondary armament comprised a twin coaxial mount for cal.30 (M1919A4E1) - with 5250 rounds in store, the usual M2 cal.50 on the roof, at the extreme rear of the turret (1000 rounds in store).

The turret was very large, to house the recoil mechanism and absorb its course, and cast, as the M48 and M60 turrets. It was also quite thick with 9.8 in (250 mm) on the mantlet, 11 in (280 mm) on the turret front, 3 in (76 mm) on the side and 1.5 in (38 mm) on top. The configuration was not standard, with the gunner at the right hand side, the loader on the left hand side, and the commander in the middle behind the gun, with his own rotatable M11 cupola (three side vision blocks, one periscope) and an adjustable seat, which was placed high in the turret bustle. The commander was also responsible for the VHS one receiver/transmitter and two separate receivers housed also in the bustle.

He also had his own commands for the turret traverse, elevation/depression for the main gun, and firing the coaxial or main gun. The rounded, one piece loader's hatch (also used by the gunner) was placed on the right-hand side, approximately half the length of the turret. Between the commander's cupola and the loader/gunner's hatch was a massive M15 rangefinder, protected by armored glass which protruded. Ready rounds of several types were stored in vertical racks at hand for the gunner on the front left side, as well as ammo racks for the cal.30. He also had the M29 periscope with M9 drive mount, ballistics computer M14 (with the M103A1), M102 telescopic sight and M107 mount, Equilibrator, and elevation transmitter M23. Other rounds were stored on each side below the rangefinder.

At hand for the loader were the turret traverse (electrical) gearbox (at his right) and between the two were placed the azimuth indicator M28E1, the elevation power mechanism, backup manual elevation pump, and elevation motor generator. There was a ventilation dome placed at the extreme end of the roof, behind the commander cupola to vent exhaust fumes. Of course, no NBC protection was offered. It should be noted that before the standardization came out, the T43 was to be a testbed for many new cutting edge, technology-heavy innovations. Remote-controlled external machine guns, ballistic computer, and an autoloader for example. Only the second was introduced in the A2 series by the 1960s.

The hull was made of welded cold RHA steel plates and partly cast (glacis and beak elements). The cast "beak" was 3.9-5.1 in (100 to 130 mm) at the thickest. The driver sat in the middle, with a small rounded one-piece hatch above him, and three vision blocks covering the frontal arc. He had access to two consoles, one for the basic performances indicator and another for the engine situation. The traverse motor, along with the generator and accessory box was placed in the middle, under the main gun axis.

The engine was a Continental gasoline V12 giving 750 hp (retained in the A1), coupled with a General Motors CD-850-4A or -4B transmission, with a 2 ranges forward, 1 reverse speed gearbox. Due to the weight to displace, top speed was not impressive, barely 30 kph on flat, which fall rapidly cross-country and an equally limited range of 80 miles at best (130 km) when cruising. This was barely sufficient in the case of sustained combat or deep offensive in enemy territory. The issue was solved with the adoption (with little change) of the M60 diesel engine in the 1960s which increased performances (23 mph or 37 kph), and range (295 miles or 480 km) of the tank for an average of 280 US gallons (710 liters).

Coincidentally, the revised tanks were made of light aluminum, taking the shape of the surrounding compartment and all available space, this allowing to carry more fuel. This power was passed onto the rear drive sprockets, seven roadwheels, and no less than six heavenly spaced return rollers. The tracks, suspensions units (torsion arms) return rollers, idler, drive sprockets, were of the standardized type also used by the M48-M60. In addition to the torsion arms, shock absorbers with dampers were installed on the first three front and two rear suspension units.

Freshly standardized from the T48E1, this version was unveiled in 1953 for evaluation. It was caracterized by the original T-shaped muzzle, but only 74 were standardized out of 300 as M103s for the US Army in 1957.

Not an evolution but a variant, this beast was the only way to recovery a ditched M103. It was based on the same chassis but fitted with a 1000 hp gasoline engine, and equipped with a heavy crane and a 100-ton winch.

Already in 1956, a pair of T48E2 testbeds were shipped to Europe for evaluation and later sent to guard two strategic chokepoints, waiting for the Soviet attack to arrive. By January 1959, 220 vehicles were standardized after modifications for the USMC as the M103A1, and the US Army requested 72 tanks from the USMC stocks, that were sent in Europe and attached to the 899th heavy tank battalion of the 7th US Army (Brethren, Germany). This unit was renamed later 2d Battalion, 33d Armor, and comprised four tank companies of six platoons (of three) each. In 1963, they were handed back to the USMC. The latter needed an evolved version, which was obtained by upgrading the existing M103A1 to the M60 standard, giving the M103A2.

These were a real improvement with a more powerful diesel engine, better top speed, and moreover far better range. Now the battalions "had legs". These were seen largely as a stopgap measure before the arrival of the MBT-70. These tanks never left the soil of USA until 1972 when they were declared obsolete and gradually retired from service. In practice, these were replaced by M60s that have a lighter gun, but capable of greater range and better performances overall. The M103 was the last American heavy tank in inventory, and 25 are preserved to this day in many locations in USA, and a single one at Bovington (UK). 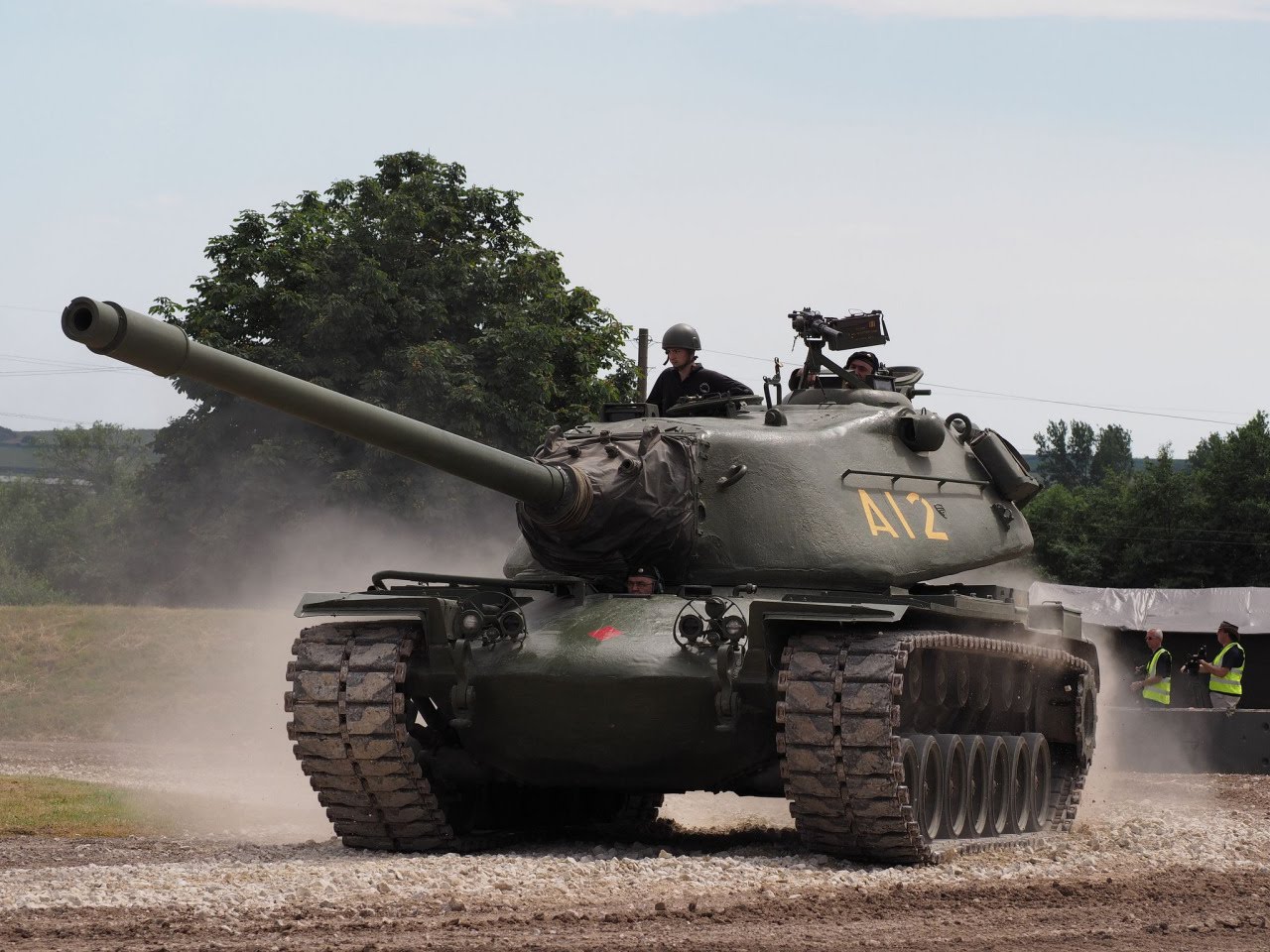 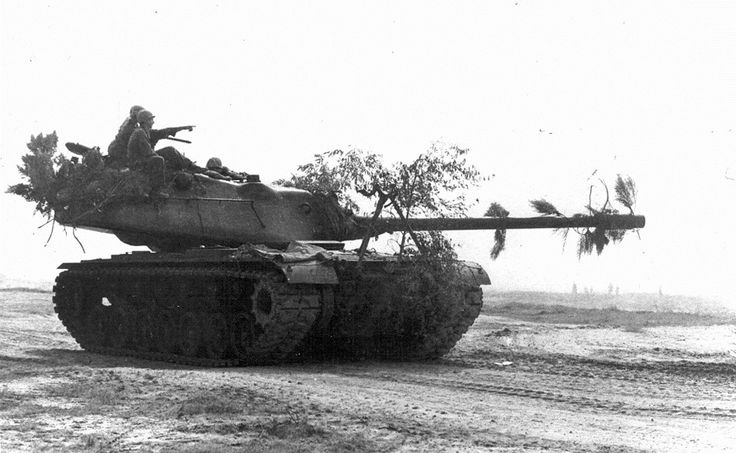 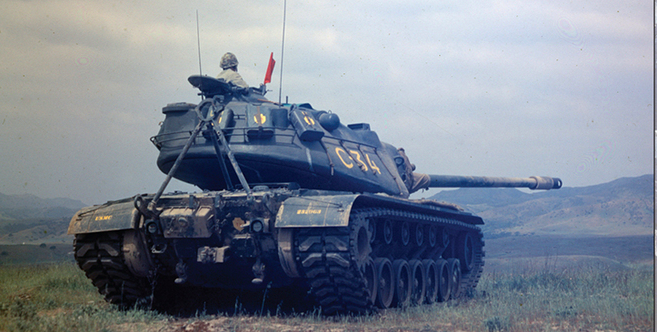