The T-46 was an attempt to fix the low mobility of the T-26 by adapting the design to include the BT’s Christie suspension. However, there were many problems – with thin armor, huge production costs, and little overall benefits over the BT series, it was deemed a failure, and the project was canceled.
The OKMO experimental design bureau was eventually broken up by 1939, but the story of the T-46 does not end there, as some T-46s apparently saw service in 1940 against Finland and possibly Germany, as static bunkers. Information on both the T-46 is incredibly scarce and often unverified. This article may include some inaccurate information, but at no point will unverified information be presented as anything other than that. 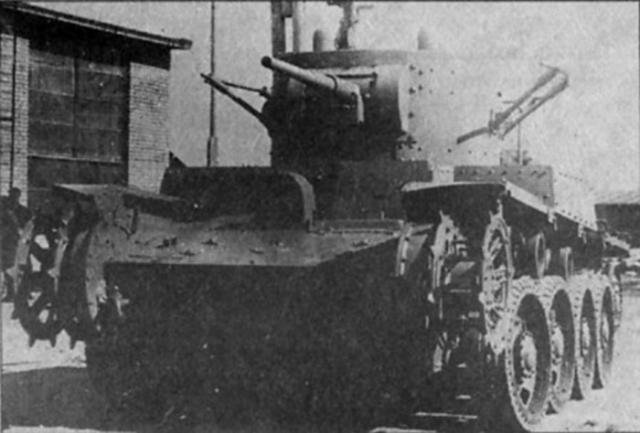 T-46, shown here using wheeled drive. Note the hang-rail antenna on the turret. This version has the lamp housing in the center of the upper glacis.

In mid 1930’s the Soviet military elite believed that the Christie suspension used on the BT series of tanks was the most ideal system for a fast “cruiser” tank, and the ability to remove the tracks and drive on road wheels was equally desirable.
The BT-7, for example, could drive as fast as 72 km/h (45 mph) without tracks, while the most common tank in the Soviet forces at the time, T-26, could only achieve a measly 31 km/h (19 mph) on pavement, and about half that off-road. So it is not surprising that in 1932 VAMM (Military Mechanization Academy) was tasked with developing a version of T-26 with Christie suspension and wheeled (track-less) drive. The academy soon produced a prototype named KT-26 (K for Kolesnyi, or wheeled). 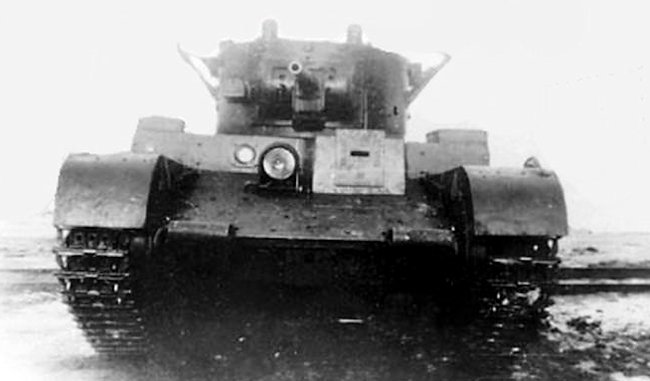 A rare clear image of the Soviet T-46 tank.
However, the suspension improvements increased the weight of the tank as well, and seeing how it still used the 90 hp engine of the T-26, it produced a disappointing 40 km/h (25 mph). Only a scale model was built and the project was stopped. But the Soviet government was not about to give up on the idea.
In 1933 the same task was given to the Department of Experimental Vehicles, or OKMO, at Leningrad Factory #174. OKMO was soon moved to Leningrad Factory #185 (a.k.a. Kirov Plant) where by 1935 the first prototype was ready, by then given the designation T-46. It too was not perfect: while designing the new hull and turret, larger than those of T-26, the weight of the tank increased to 14-15 tonnes. As the gearbox and the final drive gears were designed with a 10-tonne tank in mind, the weight placed unacceptable stress on the mechanisms, and even the new 200 hp engine, planned in gasoline and diesel variants, could not solve this issue.
Three plans of improvement were proposed, designated 46-1, 46-2, and 46-3. The latter of those, 46-3, was chosen, and received official designation of T-46-1. The original prototype was redesigned with the extra weight in mind, which now approached 17.5 tonnes. To improve mobility the new MT-5 (sources differ, Svirin: 300 hp, Solyankin: 330 hp) gasoline engine was installed. A prototype performed admirably during trials.
This version was accepted for production and the factory received an order to produce 50 vehicles. However, the large number of technological improvements turned the cheap T-26 into a prohibitively expensive machine, and a senior official was quoted equating the cost of a T-46-1 to the triple-turreted T-28. According to several sources, only 4 serial vehicles were built in November-December of 1936.

The layout of T-46-1 is similar to that of a T-26 with many improvements. The most obvious was the replacement of T-26 twin-bogie suspension with Christie suspension, with 4 wheels on each side. The tracks could be removed and the tank driven on wheels. During wheeled drive the rear-most pair of wheels drove the tank, and the front-most steered using a differential. The tank featured levers for tracked mode and a steering wheel for wheeled mode.
Its 390 mm wide tracks were an improvement over the 260 mm T-26 tracks. A noted feature of the new powerful engine was that it required only grade 2 (low-octane) gasoline, as opposed to the high-octane fuel needed for T-26.

Both the hull and the turret were enlarged. The design intended for the tank to be welded, but all images show riveted construction. 15 mm armor plates were used for vertical surfaces, and 8 mm elsewhere. The larger turret was designed to accept either the widely used 45 mm 20K gun or the short-barreled 76 mm PS-3 gun. The latter gun would turn T-46 into an artillery support tank similar to a BT-7A. However, there are no records of this gun ever being installed on T-46.

The tank carried three DT-29 machine guns: one was coaxial to the main gun, the second installed in the rear of the turret, and the third MG stowed for anti-aircraft use. A KS-45 flamethrower was installed to the immediate right of the main gun, although on some images the flamethrower port is covered with a metal cover. The enlarged turret bustle now housed a radio set (71-TK-1), and some pictures of T-46-1 show the “hang-rail” turret antenna.

Please keep in mind that the information on improvements and variants comes largely from a single source, that being either “Soviet Light Tanks, 1920-1941” or “Soviet Flame and Chemical Tanks, 1929-1945”, both by the same team of writers featuring A.G. Solyankin, M.V. Pavlov, I.V. Pavlov, and E.G. Zheltov.
According to these sources, the first improved modification was designated T-46-2 and would feature various armor improvements, a conical turret, gun stabilizer, and improved transmission and tracks. A major improvement in the next version, designated T-46-3, was the addition of sloped armor. One hull was built and subjected to testing at the Izhora Factory range. Solyankin provides a blueprint of this project, as well as a photograph of the hull. 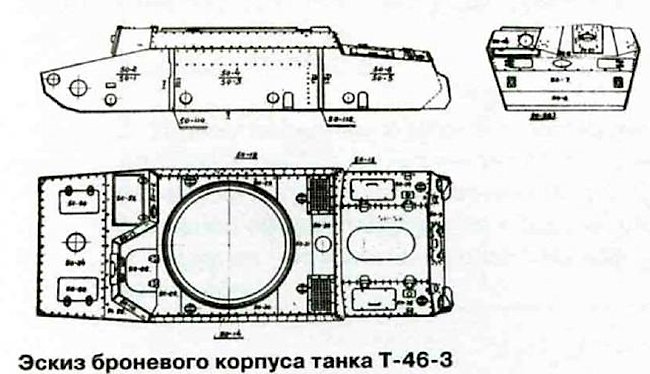 Solyankin provides a blueprint for a T-46-3 tank, according to him, a further improvement of T-46-1 tank with sloped armor.
Other projects apparently included a chemical (dedicated flamethrower) tank called KhT-46, with increased range and 500 liters of flamethrower fuel, compared to the 50 liters on the regular T-46. Also in development were a command tank (T-46-4) and a self-propelled support tank with the 76.2 mm PS-3 cannon (AT-2). There is no substantial evidence that any of these vehicles existed. One version that did exist, however, was T-46-5, also known as T-111, a tank with much better protection but having little in common with T-46-1, besides the name.
In summary, the T-46 was expensive and did not offer many benefits over the rival BT series. But it is possible that T-46 provided Soviet engineers with experience that led to work on other prototypes, such as T-126, T-127, BT-IS, BT-SV, A-20 and A-32, eventually leading to the legendary T-34.

This is where the history of the T-46 becomes very murky. In “Tough Armor: History of Soviet Tanks” Svirin notes that the production vehicles went to combat trials, where they remained for around a year and proved themselves as “very good” vehicles, even outperforming the BT in wheeled performance. What happened next is unknown. Years later it became known that at least two vehicles were used as dug-in emplacements.
One of those vehicles was restored by Russian Defense Ministry in 2004 and is now displayed at Central Museum of the Great Patriotic War 1941 – 1945 in Moscow, missing its tracks, wheels, and suspension but otherwise seemingly intact. The plaque next to the exhibit states that it was found on by the association ‘Vysota’ in the Karelia Isthmus near the village of Sosnovo, Leningrad Oblast.
Another T-46-1 is a partial hull donated to Kubinka in June 2013. The latter, according to an article by Komsomolskaya Pravda, was found at a scrap metal collection point – information which the source says is unconfirmed. It was then purchased by a third foreign party, until Dmitriy Bushkakov, an antique store owner, bought it from them for the museum. It does show that there may be more undiscovered T-46 tanks buried in an old hill somewhere. One can hope, at least. 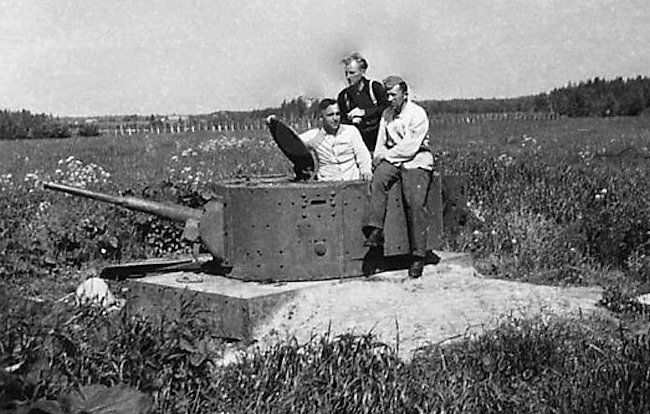 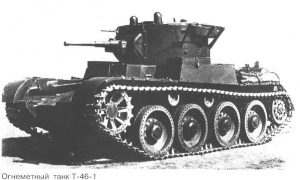 T-46-1, the “production” version of which 4 total were probably produced. The caption (from Solyankin’s “Soviet Flame and Chemical Tanks”) labels it as a “flamethrower tank”, but its flamethrower capability was limited to 12-13 shots. Svirin labels the same image in his book as “T-46A”. 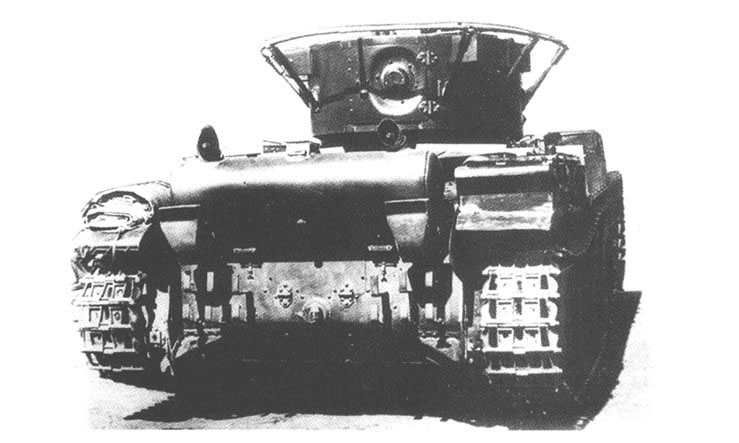 The rear of the T-46-1. Notice the rear mounted DT machine gun. 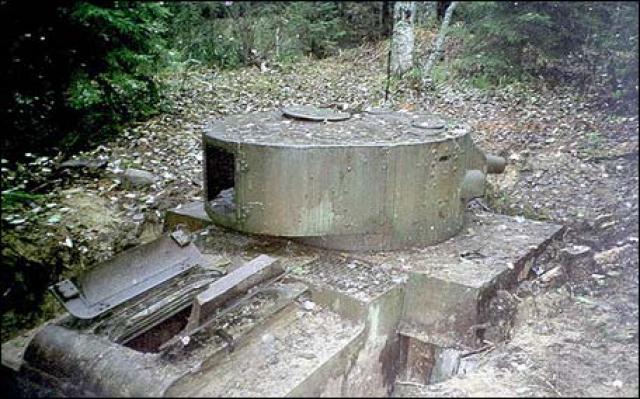 A more modern image of a T-46-1. According to the image author, it was taken at Karelian Isthmus. This one reportedly ended up in the museum at Poklonnaya Gora. No antenna or periscopes. The removed barrel was probably that of a 45 mm 20K. 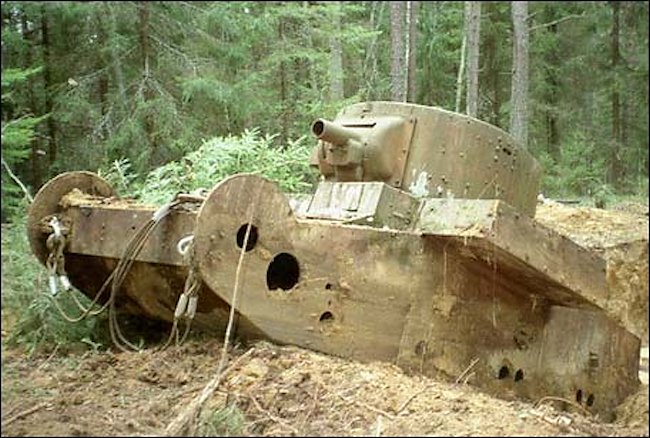 The T-46-1 from the image above, being pulled from the ground. There is a Japanese website hosting a number of close-up images of this particular tank before it was restored can be found 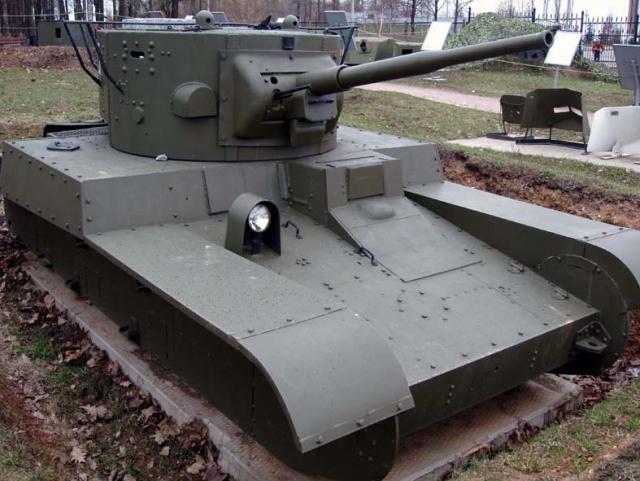 This Surviving T-46 is now on display at the Central Museum of the Great Patriotic War 1941 – 1945. Photo credit
This one has the antenna and the periscopes, but they were likely mock parts fitted during restoration, as they look different from the original photographs. 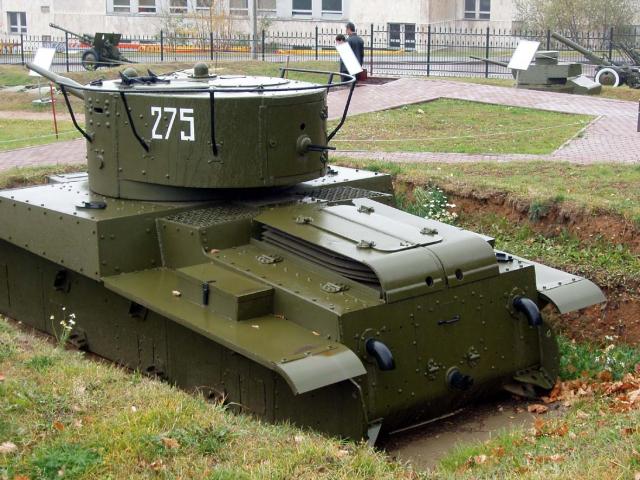 A rear view of the restored T-46-1. It is the same tank as in previous image. It is unknown whether the number is historical. The rear-facing MG is visible, but the turret door looks different from previous images. It is likely a restoration replacement since it was seen missing on a previous image. 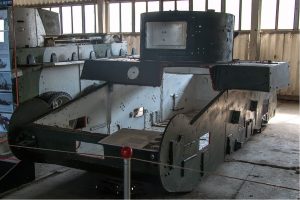 The other recovered hull in Kubinka, after being saved from a scrap yard (presented at the museum as T-46/1). The hull and the turret are facing forward. This hull is missing its upper glacis, the driver’s box, and the gun mantlet. A display to the left of the tank tells the story of its retrieval; however, there does not seem to be a high-resolution image of the display available online. 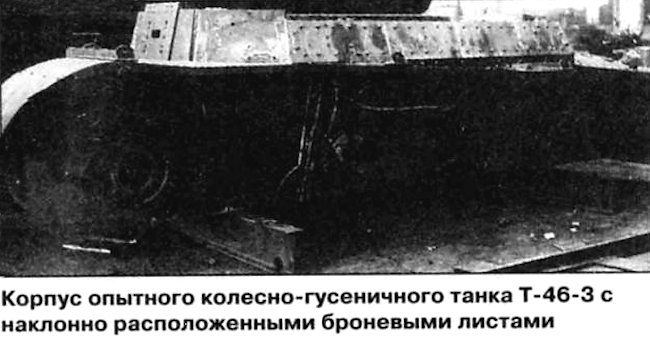 Another image from Solyankin’s “Soviet Light Tanks 1920-1941”. According to the book, one hull of T-46-3 was completed and tested at Izhora Factory range. 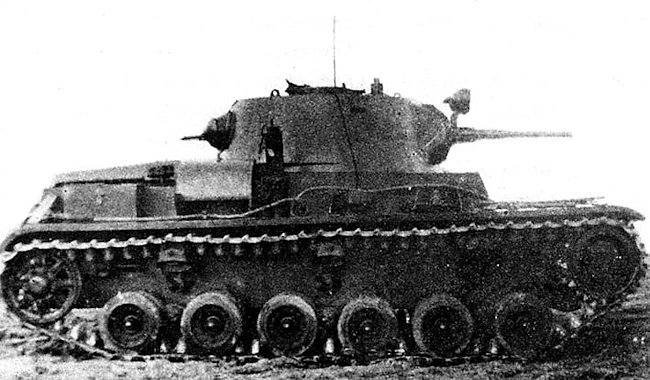 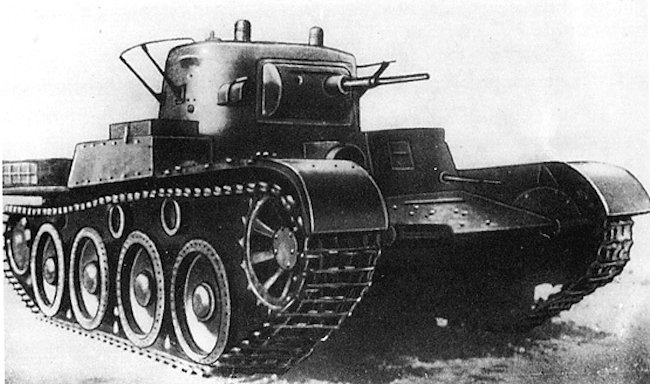 This image appears in “Russian Tanks and Armored Vehicles 1917-1945 – an Illustrated Reference” by Wolfgang Fleischer, where it is labeled as a T-46-1 tank. While vaguely resembling a T-46-1, it has a few differences: the turret appears conical, the main armament is a strange unidentified gun and not the usual 45 mm 20K, and the driver is armed with a machine gun. Either this is an image of one of the prototypes, or the illustrator did not have a good reference image for the T-46-1.

This looks so awesome. Good job 😀

I am not completely sure but I think that the gun on the T-46-1 at the bottom is some sort of anti-tank gun. It doesn’t look like any sort of Russian machine gun.

This website uses cookies to improve your experience while you navigate through the website. Out of these cookies, the cookies that are categorized as necessary are stored on your browser as they are essential for the working of basic functionalities of the website. We also use third-party cookies that help us analyze and understand how you use this website. These cookies will be stored in your browser only with your consent. You also have the option to opt-out of these cookies. But opting out of some of these cookies may have an effect on your browsing experience.
Necessary Always Enabled
Necessary cookies are absolutely essential for the website to function properly. This category only includes cookies that ensures basic functionalities and security features of the website. These cookies do not store any personal information.
Non-necessary
Any cookies that may not be particularly necessary for the website to function and is used specifically to collect user personal data via analytics, ads, other embedded contents are termed as non-necessary cookies. It is mandatory to procure user consent prior to running these cookies on your website.
SAVE & ACCEPT
21 shares