The "Off-road vehicle model 42" was conceived after an army specification, when it became obvious that, in order to follow armored columns, the infantry needed to have its own APC (armored personal carrier). Since there was no foreign contractor available for this, AB Landsverk was put in charge of the project, and designed an armored body that could be adapted to a standard Volvo or Scania chassis. This model was therefore name SKP or VKP, for "Scania/Volvo, Bodywork Armoured". It somewhat resembled the concept of the Dutch east Indies armored cars like the Overvalwagen, but stretched out. The "KP-bil", as it was quickly known, was reliable, popular, and had a very long army service, well into the 2000s, and led to several variants and modifications.

AB Landvserk designed a relatively light (shrapnel/bulletproof) sloped armor with a hexagonal section which was wrapped around the chassis. This armored body was built by Bofors, Landsverk, Bröderna Hedlund and Karlstads Mekaniska Werkstad. The driver/co-driver could see through armored shutters. Access to the vehicle was given by two narrow upper side doors, with a stepbar to help reach them. Another long stepbar was welded just above the side armor angle, in order to help infantry climb into the open compartment at the rear. Carrying capacity was seven equipped infantrymen. The armor thickness ranged from 4 mm to 20 mm (0.16-0.79), with 8 mm (0.31 in) on the sides and rear. The engine was either a Scania Petrol/Motyl or a 4-cyl Scania-Vabis 402/1 giving 115 hp (85 kW) at 2300 rpm. The rear double wheels were protected by armored covers. These vehicles were unarmed, since they were seen only as armored infantry transports, and not infantry fighting vehicles. But they were nevertheless Sweden's first APCs.

The first batch was delivered in 1943. However, it was rejected after showing body weaknesses, due to welding the hardened steel. It was eventually approved in early 1944, but these 38 vehicles had to be refitted with new bodies. The process called for a soft-hardened steel assembly, then heating the completed body-work in purpose-built ovens to remove the tensions. Production records from Scania and Volvo are unknown. By the 1950s, some vehicles were armed with a twin machine-gun mount over the cab roof. Since this arrangement was intended for AA purposes, the designation was V/S KPF, the "F" standing for "Fordonsluftvärn", or anti-aircraft. It became the main variant in service. By the early 1990s, the last KPFs received armored roofs with extra machine-gun mountings, for two KSP-58s. Two racks of 6 smoke dischargers were also fitted, and six firing ports added to the sides.

Outside Sweden, the KP-bil received its baptism of fire in peace-keeping missions in Congo (1961-64). Only SKPF (Scania) vehicles were sent, painted in white. They were locally called "white elephants". War experience dictated a modification of the machine-gun mount, evolving to a fully fledged turret, to protect the gunner's abdomen. Some were left there, reconditioned and used by the Congolese Army in 1965. They were also used, in the same period, in Cyprus, during the Cypriot intercommunal violence in 1955-64. Several vehicles are preserved today, like in the Swedish Army Museum in Stockholm.

Modernized hard-top SKPF in the 1990s.

; Preserved SKPF, repainted in the UN peace keeping livery to commemorate the operations in Congo in the early 1960s (for veteran\'s day), at the army museum at Stockholm - Credits: Wikipedia 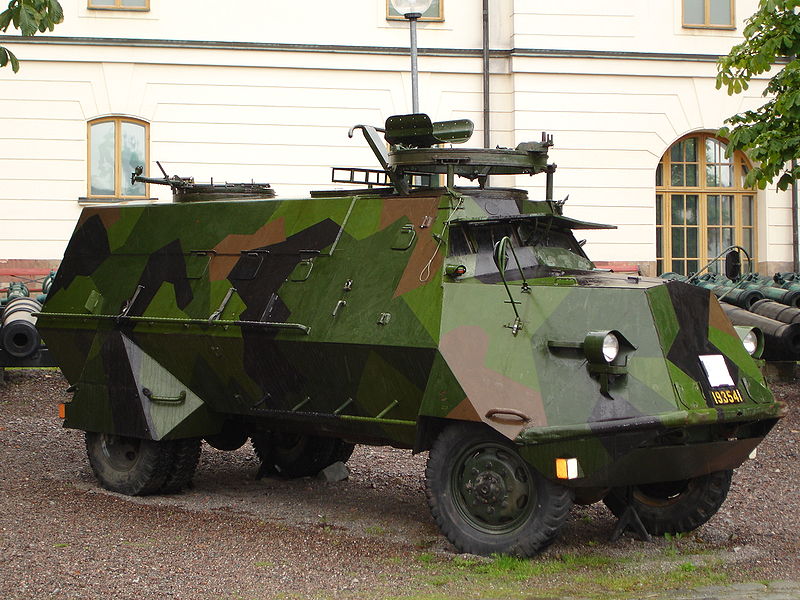