Belgian defensive development during the interwar

In September 1939, Belgium was not a negligible or token force. It held the seventh place in armored strength in Europe, just after Poland and the Czech Republic. This force was constricted by a limited budget, the result of the long-run 1930 financial crisis, and the fact it had to be, first and foremost, a purely defensive force, according to the “non-provocation” policy of 1936, regarding the Kingdom relations with bordering Nazi Germany. This very firm neutral position was also required to keep at bay ever-present tensions between the two very different cultural majorities of Belgium, the Walloons, related to the French, and the Flemish, culturally nearer to the Netherlands and Germany. This was accompanied, however, by energic measures, such as a 15% defense budget increase, the national service military training being stretched from 8 to 12 months and modernization of all fortifications, highly rated by military experts in 1939.

Belgian armored forces were spread into several cyclist border units (notably the elite “chasseurs ardennais”), cavalry and infantry units. The fully motorized ones were supposed to act as “flying units” to defend major communications lines between five strategical strong points like the Namur and Liege forts, and above all, Eben-Emael. These thoroughly modernized fortifications -in the Maginot line style- were designed to serve as a buffer against German attacks, repelling assaults for at least five days, and at best two weeks, a delay thought long enough to allow the French and their British allies to move into place and build their own defensive line, closing the gap between the north sea and the Maginot Line itself -with the notable exception of the so-thought impassable Ardennes forest.

For these reasons, Belgium never tried to acquire or build medium tanks until 1936 -seen as an offensive or provocative gesture by the politicians. The bulk of the armored forces comprised towed AT guns, mostly those of the excellent SA-FRC (which stands for “Fonderie Royale de Canons”) 47 mm (1.85 in), or modele 1931, of which over 750 were delivered to infantry and cavalry units. Tractors were of the Vickers “Utility Tractor” type, unarmed, small, stocky, of which two types largely produced, for cavalry and infantry. Their armor, equipment and speed differed accordingly.

British Vickers designs also formed the basis of the two main Belgian tanks type. The British Vickers Light Mark III was modified to give the for T15 light scout tank, while Vickers unarmored tractors where used for the construction of the T13 tank hunters, which evolved through three variants and formed the backbone of the Belgian antitank units. A handful of vintage Renault FTs were still in depots, held in reserve and scheduled for replacement with the recent ACG-1, of which only a dozen were delivered between 1937 and 1939.

In May 1940, the Belgian army could deploy 22 divisions (mostly infantry ones – 100,000 men for the standing army, 440,000 mobilized recruits in 1939, and 900,000 total with reserves in May 1940, an astonishing feat for a 8 million population) and about 200 AFVs spread into “penny packets” among divisions, and nearly 700 towed antitank guns, served either by artillery tractors, trucks or Ford-based Marmon Herrington armored cars. Total strength was only 2 fully mechanized divisions, one armored regiment and two motorized divisions. Following the Mechelen incident (a plane crash involving a German Major in Belgium, near the Meuse river), German plans detailing upcoming operations were found, and brought to the Allies. As it was, this plan called for a simple invasion trough Belgium, targeting western coast harbors, virtually repeating the 1914 Schlieffen plan. However, both King Leopold and General Raoul Van Overstraeten, his aide de camp, suspected some trick and rather firmly thought a wide encirclement using the Ardennes forest was more probable, but General Gamelin ignored the warnings and stuck to his Dyle plan. The Belgian army was supposed to hold the Antwerp – Liege – Namur line on the borders as long as possible to allow the main French forces to take positions, and withdraw afterwards to make junction with French forces, theoretically presenting a narrower front, easier to defend.

The battle of Belgium – Border battles

During the first day of the invasion, German Fallschirmjäger swiftly took Eben-Emael, the cornerstone of the Belgian defense, in one of the most daring airborne operations of WWII. Not only was the Belgian deployment schedule jeopardized, but also the whole Allied defensive Dyle plan. With well coordinated attacks which took the most important objectives (bridges over the Meuse and Albert Canal), silencing fortifications around, the main offensive began.

Backed by Luftwaffe’s wings, Army group B quickly spearheaded through Belgium, dealing with any opposition in the process as “Fall Gelb” (case yellow) required. During the border battles of 10-11 May, the defensive lines along the Maastricht and Bois-le-Duc canal, Scheldt and Albert canal, were assaulted and partially forced through. However, the 1st Belgian Light Infantry and, later, the Belgian Ardennes Light Infantry at Bodange, both held up massive formations like the 1st Panzer Division for up to 8 hours, and the Albert Canal’s west bank was held for 36 hours. After the 4th and 7th Belgian Infantry Divisions’ withdrawal, the French 7th Army, failing to link up with the retreating Dutch army, turned eastwards and soon clashed into the German 9th Panzer Division at Tilburg, near Breda. Without efficient air support, they had to withdraw to Antwerp.

Later on, until 14 May, withdrawn Belgian units held Liege and Namur, executing demolition missions and delaying actions. Some of these patrols, largely equipped with T13s, scored some kills against nearly all Panzer types involved. The FRC 47 mm (1.85 in) was quite effective at medium and short range and could go through the frontal glacis of both the Panzer III and IV (30 to 50 mm/1.18-1.97 in thick). On the other hand, they fell prey to nearly all German tank and AT gun types involved -with the notable exception of the flimsy Panzer I, due to their obvious lack of armor. Despite all odds, these efforts paid off and the delaying Battle of Tirlemont and Battle of Haelen proved it. The major armored clash of the time occurred when the German VIth army launched a resolute attack into the Gembloux gap on May, 12. The area was defended by the French 1st Army and its elite armored formations. The following battle of Hannut, was the first major tank-to-tank encounter of the war. It ended with a German victory, despite appaling losses, due to superior French tanks, the latter being undone by a poor, rigid WWI style-tactical deployment.

Breakthrough at Sedan and aftermath

On May, 15, the Allies learnt German Group A had made a decisive breakthrough at Sedan, and began to make plans for a massive withdrawal from Belgium, leaving the well defended Antwerp-Namur line. The Belgian Army withdrew from Liege, which had held firm for a week, and now prepared to defend Antwerp. Antwerp and Namur offered stiff resistance until 22-23 May. However, Brussels fell on May 18, and the government fled to Oostend. By May, 20, the situation of the Belgian Army was hopeless. Despite resolute delaying actions, what was left of the armored forces was not sufficient to mount any offensive as suggested by the British BEF. King Leopold instead insisted to cover a large pocket around Belgian west coast harbors. A desperate counter-attack (the battle of Arras), unsupported by delayed French elements of the first army, failed and, quickly, a new plan was drawn, as the British army retired to the southern coast of Belgium and Dunkirk.

On May, 23, the French attempted a localized counter-attack, which ended with few gains. The Belgian front was reduced to a 80 km (50 mi) long defensive line over the most southern ports covered along Yser river, around Ostend and Nieuport, still tightly linked with the BEF. On the 24th of May, the Belgian army clashed with no less than four divisions commanded by Von Bock, and managed to inflict tactical defeats on the Germans, while counter-attacking. This fighting mostly involved infantry, supported by the last towed 47 mm (1.85 in) guns, but, without air cover, their position was untenable. The Leie line were breached on the 23rd. Along with the evacuation of the first elements of the BEF at Dunkirk and the encirclement of the 1st French Army, Bruges and Ostend soon fell, after the disintegration of the remnants of an exhausted Belgian army on 27 of May. The king called for an armistice the same day. With the surrender came the capture of considerable material, at least those which had not been sabotaged beyond repairs. Subsequently, the Werhmacht took Utility B artillery tractors and T13s in quantity. Most were used for training and local defense. 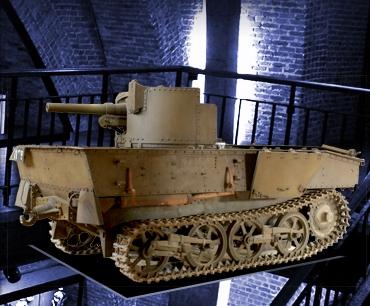 Belgian T13 B2 at the Brussels Military Museum. This is the only vehicle preserved, having served in the Régiment Cycliste de Limbourg (Regiment Grenswielrijders Limburg). A knocked out ACG-1, burning near Antwerp – Credits: Bundesarchiv. 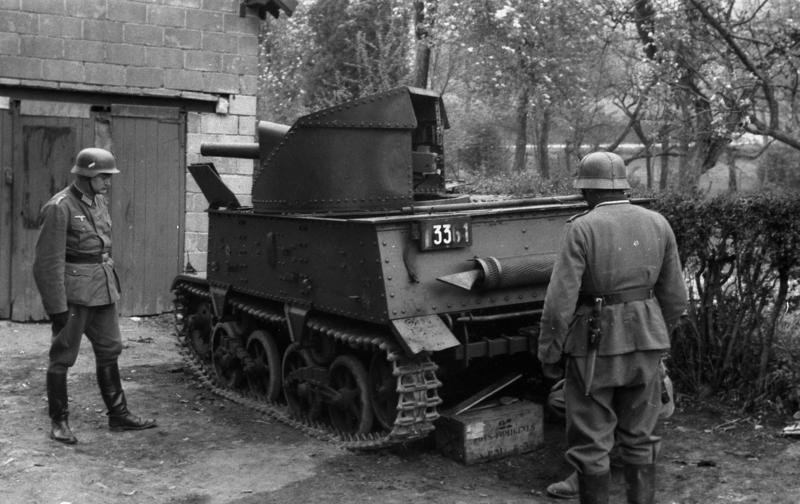 A Belgian T13 B3 belonging to the 2è Régiment de Cycliste Frontière. It was abandoned on 11 May 1941 due to problems with the engine. It was captured and is seen here being examined by German infantrymen – Credits: Bundesarchiv. Belgian Renault FT. 75 were still held in reserve in early 1939, and replacements were on their way in the form of the ACG-1 medium tanks. This illustration is based on the Brussels army model on display at the Royal Museum of the Armed Forces in Brussels.

– T15 : 42 built 1936-38, based on the Vickers Light tank Mk.III. They were shipped from Great Britain with a conical turret, unarmed, and were equipped in Belgium.

– Renault FT : Approximately 75 FTs were still in service by 1938, but soon placed in reserve in depots and none were active when the war broke out. They were scheduled for replacement with the French-built ACG-1.

Information relevant to this article incorporated.
The sole exception is the information about the 10 ACG-1. All my sources say 12.
Could you please provide me with a credible source?