The pride of South Korean Army nowadays is the K2 Heukpyo (Black Panther), one of the latest MBTs to date (freshly introduced as of 2014) and certainly on the shortlist of the very best worldwide. Built by Hyundai Rotem at ?7.8 billion (US$8.5 million), this was a far cry from the M48K it replaced or even compared to the K1. In fact, it was planned by the South Korean Agency for Defense Development to get rid of foreign parts as much as possible and also enabling export capabilities (without third-party licensing problems).

Of course, the K1A1 already showed the way and was superior to any North Korean tank at the time. Development started in 1994. Rotem's very first designs in the late 1990s tried an unmanned turret, and the Rheinmetall's experimental 140 mm smoothbore gun was also for a time (until the company reversed t a more conventional 120mm gun) envisioned. With the XK2 program, engineers took a compromise eventually, with a 120 mm/L55 with a reconfigurable cradle able to mount the 140mm if need be.

By 2006 already, the K2 production model was ready for testings. Total expenditures for the project arose to US$230 million. Production started in 2007, on March, 2, at Changwon in South Korea. A local powerpack was designed, based on the German MTU-890, 1,500 horsepower strong, but it showed a considerable amount of teething problems that delayed operational service acceptance for two years. There was a new bump in 2011, when the Defense Acquisition Program Administration had to admit that the engine would be replaced by the original MTU-890 instead, at least for the first 100, delaying operational introduction until March 2014. The K2 crossing a trial pool after a preparation, showing its snorkel mast.

Improvement from the K1A1

Both the K2 and K1A1 guns were of the same caliber, but the former displayed a much longer barrel (1.3 m or 4.3 ft) for a greater muzzle velocity of 1400 m/sec in return, enabling much better levels of accuracy and penetration values. In addition mobility was improved as it could ford 4m of water without a short preparation (see later). Posture control function (linked to the hydro-pneumatic suspensions) was also a new feature allowing to raise or lower the tank silhouette, while the laser warning system directly pointed the turret towards the source of illumination, saving precious seconds.

All in all, it was indeed an impressive new Main Battle Tank, which revealed itself, after all these years of development and teething problems of its ambitious domestic powerpack, also one of the top costiest tank ever, at US$8.8 million apiece. To give a comparison, the Chinese ZTZ-99 is worth $2.6 million, and the Abrams is approximately $8.5 million apiece. The Leclerc seems to still top the list at $12.6 million (even $23 million when accumulating all past developments). The Japanese Type 10 is the second costliest at $9.4 million. It is difficult to estimate the price of the comparable, opposite North Korean Popkung Ho, would be in the range of $2 million. It's quite difficult to assert. 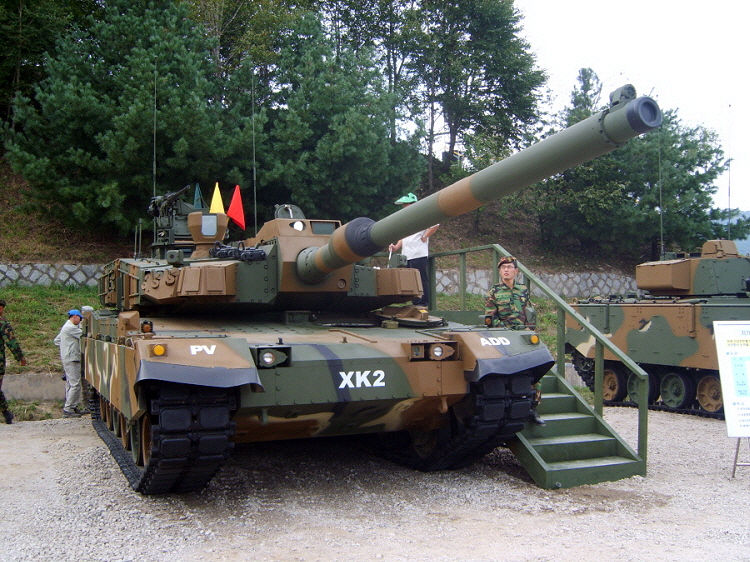 As most modern MBTs the hull is a multi-layered one, with a welded hardened steel core, covered by modules of composite armour, details of which are of course duly classified. The latter comprises K2 PIP Non-Explosive Reactive Armor and ERA blocks, in particular to the turret's front. Tests showed the frontal armour was impervious to the 120 mm APFSDS round fired from a L55 gun. There is also an active layer with a soft-kill anti-missile system, that would be completed with the K2 PIP by a hard-kill anti-missile defense system that can track and target the incoming missiles.

To complete the active protection, a millimeter band radar system is installed, providing Missile Approach Warning System (MAWS). Sensors transmit data in real time to the computer that can triangulate incoming projectiles, and enable automatic release of Visual and Infrared Screening Smoke grenades as well as warning the crew. Of course collective NBC with overpressure is fitted as a standard (completed by atmospheric sensors), as well as automatic fire suppression systems in the crew and engine compartments.

The core of the K2 lays into its locally developed Hyundae WIA smoothbore 120mm /55 caliber complemented by an autoloader similar to the one used on the leclerc, reducing the crew and allowing for much greater rate of fire, of 10 round per minute. To serve it there was a 16-shell read-round ammunition magazine, with a total of 40 carried between the hull and turret. Secondary armament comprised a roof-mounted 12.7 mm (0.5 in, cal 50) K-6 heavy machine gun (3,200 rounds) and a 7.62 mm coaxial light machine gun (12,000 rounds).

Upon arrival to the target, the on-board millimeter band radar is enabled after the opening of a parachute, time for the Infrared and radiometer sensors to seek targets and when spotted, an explosively formed penetrator is launched from a top-down position, perfect to target these generally less well protected parts of the enemy tanks. Choice of the target can also be commanded by the gunner from a remote link.

So serve the armament, the FCS comprises an Extremely High Frequency radar system, coupled with a laser rangefinder and crosswind sensor. The system can track and lock on several targets simultaneously at 9.8 km (6.1 mi) using a thermographic camera. There is a state of the at for the gun stabilizer and trigger-delay mechanism to fire accurately on the move. The trigger-delay system allows the beam to be re-aligned after encountering a very uneven terrain. Also locally designed are the Korean Gunner's Primary Sight (KGPS) and Korean Commander's Panoramic Sight (KCPS).

They are derived from those used in the K1A1 tanks but upgraded. The system allows a hunter-killer mode and tank commander override. Redondant systems, as stated by the manufacturers, should allow in an extreme situation the tank to be manned by the driver only, the gun being able to be automatically pointed and fired through the computer's decisions with data provided by the sensors about the best opportunity targets, in turn.In addition the K2 operates the C4I (Command, Control, Communications, Computers, and Intelligence) system, a battlefield awareness system, with modern touch-screen consoles and digital displays (similar to the US Inter-Vehicular Information System), allowing it to share data with other units, on the ground or the air. There is also GPS (Global Positioning Satellite) navigation uplink. An IFF/SIF (Identification Friend or Foe/Selective Identification Feature) is also part of the package, launching a 38 GHz beam from the mantlet to the targeted vehicle to avoid mis identifications and friendly fires.

The tight fit of the engine compartment (the main diesel is mounted transversally) allowed to engineers to cram into a Samsung Techwin gas-turbine engine to boost speed for short runs. It develops 100 horsepower (75 kW) and is also used an an auxiliary unit for on-board systems and some defense systems when the main diesel is shut. This turbine also helps for minimal thermal and acoustic signatures, and to save fuel. The power unit is a 4-cycle, 12-cylinder water-cooled diesel which develops 1,500 hp (1,100 kW), originally built by Hyundai (second serie planned in 2014+), whereas the first batch of 100 was powered by the German MTU-80 diesel.

This powerpack gave the Korean MBT a top speed of up to 70 km/h on flat, up to 52 km/h off-road and 0 to 32 km/h acceleration in 8 seconds. As shown in field tests, it was shown could climb 60° slopes, and 1.8 m vertical obstacles. The K2 can ford up to 4.1m of water with a short preparation (20-30 min) a real improvement over the previous two hours or so, and to ford 2 meters deep on the previous K1. The snorkel system doubled as a conning tower for the tank commander. One of the solution was to allow to fill the hull with 500 gallons of water to have a balance pressure and avoid excessive buoyancy from the inside. When resurfacing it was combat-ready.

The other major advantage of the K2 over previous designs is its advanced suspensions system called the In-arm Suspension Unit (ISU), which allowed to manage every bogie and its control on the ground. Hydro-pneumatic, it allowed the whole hull to "sit", "stand", "kneel" or "lean" on each side, giving for example the perfect hull-down position when awaiting the enemy, or more elevation (24°) when firing on high-up targets, including low-flying aircraft. When running at high speed, "standing" the suspensions made for a higher ground height, and better mobility by amplitude over rough terrain, as each bogie could be adjusted in real time on the fly to deal with vibrations and cushions the chassis.

The K2 entered service in 2013 (early, preserie of 25) and 2014 (official) as stated with a German MTU engine instead of the domestic powerpack for the first batch. As for today (according to Military-Factory), 241 K2s has been delivered by the consortium, including Hyundai ROTEM/Agency Samsung, Doosan, World Industries Ace Corporation. Total planned its about 680 for the late 2020s/early 2030s, including the upgraded variant, the K2 PIP.

If so, South Korea would field quite an impressive array of modern tanks to replace its age-old M48/M60K, added to the already existing 1,500 modernized PIP K1 and K1A1 for a grand total of 2180 modern MBTs, to compare for example to 400 Leclercs in service with the French Army. According to 206 were deployed, and 100 more are requested by the Army as of may 2016 to be deployed on the border with North Korea.

This upgrade is intended for the near future (2016-2020) to improve the early batches. It comprises:
-Upgrading of the the Semi-Active hydropneumatic suspension Unit, to an fully Active Unit
-High-resolution, real time terrain-scanning system, to improve the suspensions behaviour on rough terrain, essentially "planning ahead" the nearby terrain up to 50 meters away, calculating the optimal position of the bogie.
-Integration of a hard-kill anti-missile KAPS system.
-Addition of NERA modules (Non-Explosive Reactive Armor).
-Ongoing tests on a 120 mm/L55 electrothermal-chemical gun.

Turkey "adopted" the K2: Indeed after a competition held against the Leclerc and Leopard 2, the K2 won and in June 2007, negotiations ened with an arms deal contract (₩500 billion/US$540 million with Otokar) for licensing the K2 design of in Turkey. On July 30, 2008, a further $540 secured technological transfer and design assistance. The local design is known as the MİTÜP Altay, the first Turkish local MBT, final development phase today. Many alteration has been made to the original design, but its still shares many subsystems with the K2. In 2011 however, the contract coverage was shortened due to development delays and costs. In addition, late September 2013, the Peruvian Army also tested the K2. The Altay is intended to enter in service in 2018. 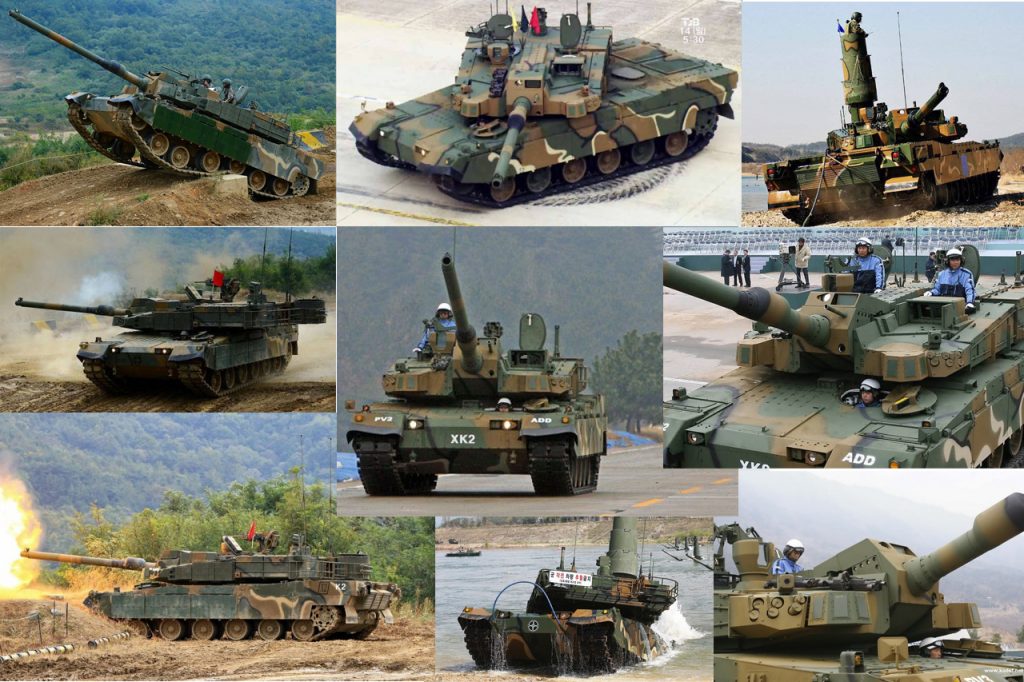 Additional web references of the K2.

K2 Black Panther as of today.