The HQ-7 (For "Hongqi"-7 (hóng qí) meaning "red flag" or "red banner"), is the name of a ground-to-air AA short range missile developed in China from the R-440 Crotale ("Rattlesnake") missile. Development of the HQ-7 system began in 1979 It has been first developed on a 4x4 carrier in the 1980s called P20. The HongQi-7 (HQ-7, also known as FM-80 in its export form) is an all-weather short range air defence system developed by 2nd Aerospace Academy (now China Academy of Defence Technology) on the basis of the French Crotale air defence missile. The HQ-7 entered operational service in the late 1980s with the PLA to provide short-range point defence. It is currently in service with all three services of the PLA. The improved variant FM-90 was introduced in 1998.

The development of the HQ-7 surface-to-air missile (SAM) began in 1979 to meet a requirement of the PLA for a mobile, short-range, low- and very low-altitude air defence system. The programme was managed by the 2nd Aerospace Academy (also known as China Changfeng Mechanics and Electronics Technology Academy, now China Academy of Defence Technology). 23 Institute was responsible for the development of radar fire control system, and 206 Institute was responsible for the ground equipment.
The HQ-7 is almost identical in physical and technical characteristic to the French Thales Air Defence (formerly Thomson-CSF Airsys) Crotale air-defence missile system. China imported few examples of Crotale and its shipborne version Sea Crotale in the late 1970s when it formed an alliance with Western countries against the Soviet Union. Thomson-CSF was expecting more orders to follow but China developed its own version by reverse-engineering the examples it obtained. This was probably tolerated or even tacitly consented by the French government in exchange for China’s co-operation in the Cold War.

Test missiles were made in 1983 and the first firing took place in 1985. Design certification was undertaken from July 1986 to June 1988. Production began shortly afterwards for use as filed air defence. The HQ-7 is available in two versions; the shelter-mounted version used by the PLAAF and self-propelled version used by the PLA ground forces. The export version FM-80 was first revealed in the 1989 Dubai Aerospace Show. Later in 1998 China National Precision Machinery Import and Export Corporation (CNPMIEC) introduced an improved variant FM-90 featuring fast and longer-range missile and infrared camera to compliment the TC tracking camera.

The HQ-7 missile features a long, slim body with sharp nose, four stabilisation fins, and four front canards. The missile has multi-target interception capabilities to engage targets from same or different directions. Using a solid rocket motor, the missile has a max speed of Mach 2.3 and a range of 12km. The Command to Line Of Sight (CLOS) guidance uses radar and electro-optical sensors. Guidance operating modes include IR, IR+TV, and manual, with robust resistance to active/passive jamming and meteorological noises. The missile is armed with a high-explosive fragmentation (HE-FRAG) warhead, initiated by with a proximity fuse.

A typical HQ-7 operational battalion comprises three operational sections (batteries) and a technical support section (battery), with both direct support (10 vehicles) and indirect support (with various special test benches and standard test equipment) maintenance groups. Each battery comprises a Search Unit (SU), three Firing Units (FUs), three optical aiming systems, and four 40kW generators. The HQ-7's search unit is used to search, identify, evaluate, and classify the targets. It then designates the most dangerous targets and distributes the information to the firing unit(s). If the radar is jammed then the optical aiming units of firing units can be used to acquire and designate targets.
The search unit comprises a E/F-band Doppler search radar which has a detection range of 3,200m to 18,400m; a data processing unit capable of processing 30 targets and in conjunction with the radar system to track 12 targets simultaneously; a wire network between itself and firing units; IFF, and radio station.
The firing unit comprises a four- or eight-cell missile launcher; a monopulse J-band tracking radar with an operational range up to 17,000m; a TV tracking system with an operational range of over 15,000m in clear weather; an infra-red localiser; a data processing unit; a wire network between itself, the search unit, and other firing units. The self-propelled version HQ-7 is mounted on a P4R electricity-powered wheeled 4 X 4 chassis, which has a maximum road speed of 60km/h and a max range of 500km. 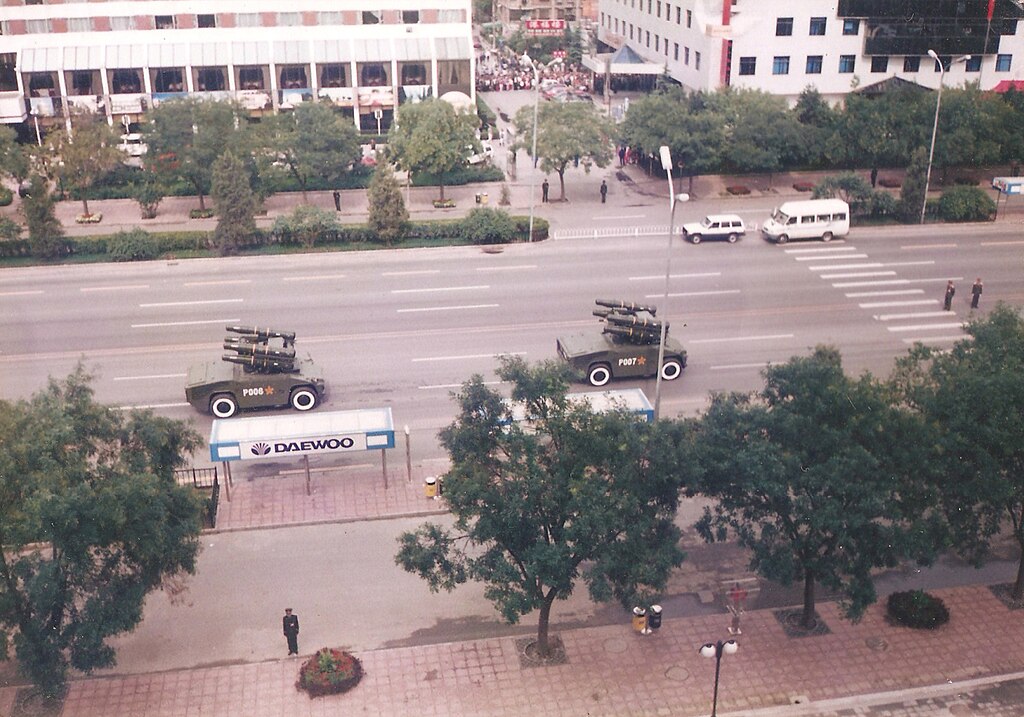 At the end of 1998, the FM-90, an enhanced version of the FM-80/HQ-7, was introduced to the public. Compared to the original system, the improvements on the FM-90 include:
Using VLSI technology-based computer (designed by 706 Institute) to replace the original LSI technology-based S-9 computer on the HQ-7/FM-80.
Using digital electronic technology to replace the original analogue design, increasing the missile's abilities against active/passive jamming.
Using a new two-waveband tracking radar to replace the original monopulse radar
An infrared camera was added to the TV tracking system so that the optical tracking system can be used at night.
Target information between search and firing units is transmitted via a datalink pole system similar to that fitted on the later production Thomson-CSF Crotale 4000.
Re-designed missile warhead fusing system.
In addition, the missile's seeking/homing range, maximum speed, and attack range all have been improved, which greatly increases its combat effectiveness. With a maximum detecting range of 25km, the FM-90 is capable of attacking three targets using three different guidance modes simultaneously. The missile also has anti-missile ability against ultra-low-altitude cruise missiles, air-to-surface missiles, and anti-radiation missiles at a distance of 17km.

The B20 carrier vehicle

France developed the Hotchkiss P-4R as part of a SPAAML battery composed of one radar vehicle for targeting acquisition and 2-3 launch vehicles with their own guiding system. The Chinese created a rather similar vehicle which was developed during the 1980s. The 4x4 vehicle name is not known, but placed under the same HQ-7 (FM-80), Self-Propelled designation. It was developed by the 206th Institute. It has not been exported. However it was probably found too slow and a more powerful vehicle, with better off-road characteristics was developed to carry the weapons system, including enough space for a complete reload.