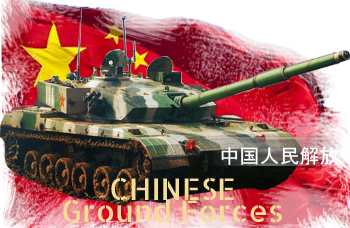 The Chinese Tanks in the cold war

The fall of USSR somewhat relieved the Chinese PLA of the traditional threat of a war on its northern borders, but with the new world order emerging in the 2000s, the Grounds forces were consistently improved and geared towards quality for costly MBTs, while quantity shifted towards cheaper wheeled vehicles while the emphasis was put on export, with success.


Modernization of the PLA's armor

By fact, the PLA deploys today the world's largest ground force, with 1.6 million personnel (60% of the PLA's total manpower), divided among seven military regions. The PLAGF reserve had a 510,000 personnel divided between infantry and anti-aircraft artillery (AAA) divisions. Two amphibious mechanized divisions are based in Nanjing and Guangzhou districts. 40% of PLA divisions and brigades are now mechanized or armored, thanks to a reduction of size to bolster economic growth, which favored the army core of motorized elements.

The latest operational doctrine integrates information technology, electronic and intelligence as well as long-range precision strikes. An integrated battlefield information network with (LAN/WAN) communications, satellite communications, and UAV-based surveillance/recce is set up, as well as mobile command and control centers. The bulk of the armored divisions is equipped with Type 96 and 90 tanks, whereas the Type 80/85/88 and older types are now in the active reserve. The Type 99 is reserved only for elite battalions.

Equipment of the PLAN 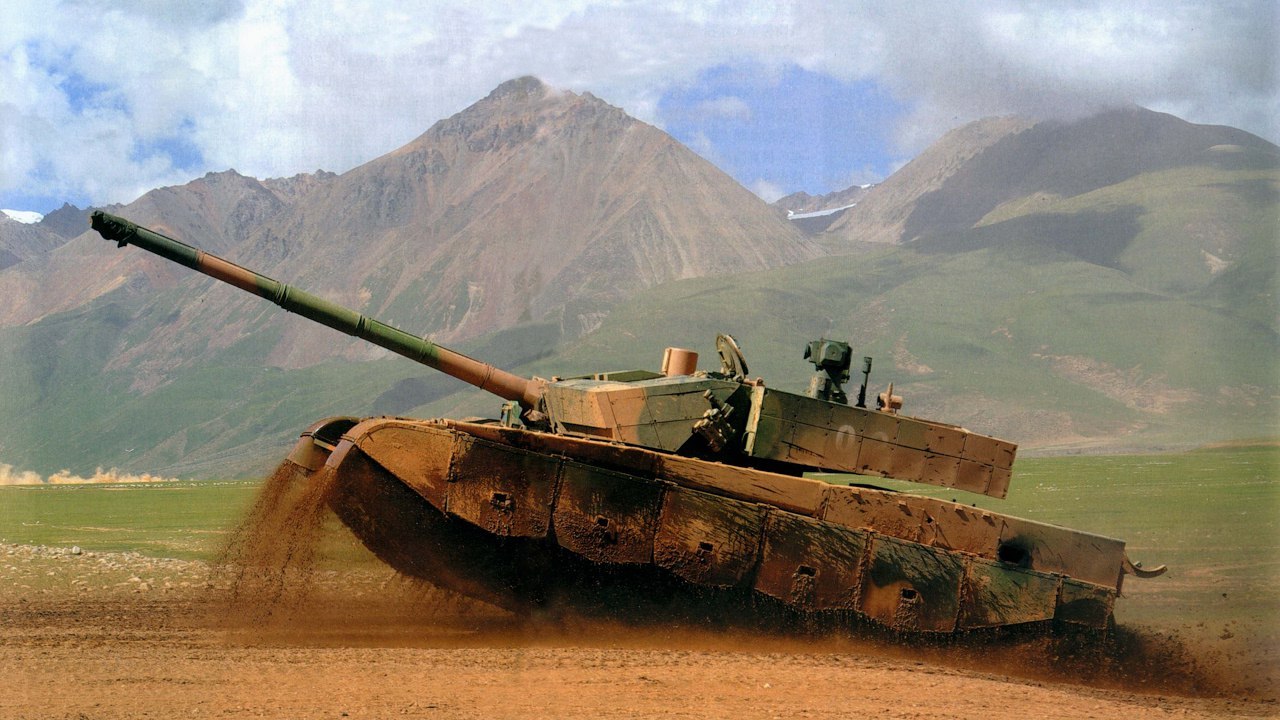 Indeed, apart of the ZTZ-99 we covered there already, the improved A version and the brand new ZTQ light tank are 2000s developments that are intended to renew completely the remainder of the modernized park of 1960-70s machines. Nowadays, the lite is represented by the ZTZ-99A and older ZTZ-99 roughly 1000 tanks, while the bulk is made with 3,000 ZTZ-96s (upgraded to the G version) and the whole range of light tanks (The venerable Type 62 or the amphibious Type 63 and type 77) by the ZTQ-15 and its future derivatives. As a cheaper tank compared to the VT series, the ZTQ present great export opportunities and the VT-5 has been developed in this direction.

ZTZ-99: The already old elite MBT received some upgrades like the 2000s KM version, but it had been produced in limited numbers and has never been exported. The task is reserved to the current VT-4 family based on upgraded Type 96G versions. It is understood that there are critical Chinese-developed components that they are not willing to share. Total production is now estimated about 900, including the Type 98 pre-serie prototypes, Type 99 and the latest Type 99A1/A2.

Type 99A2 or ZTZ-99A2 main battle tank. Developed from 2003, unveiled in 2007 and introduced in active units in 2011, it is so different from the base ZTZ-99 that it's clearly a brand new type in itself. It boasts a 1500 hp powerplant (vs 1200), a new smoothbore main gun (improved to fire the Invar-type ATGM), same wheeltrain and suspensions although with closer wheels, tracks and part of the equipment that can be standardized. Other than that, it combines a shorter, more compact chassis, 3rd generation (Relikt-type) ERA semi-passive protection and a new active protection system, plus better communications, networking and digitalized consoles for battlefield awareness, as well as a better commander's periscope. The more powerful powerpack is there to compensate for the added weight of armor, but it's also helped by the shorter dimensions of the tank. So in the end, the ZTZ-99A2 is credited for a solid 75 kph top speed governed. Production of the ZTZ-99A is estimated at about 500.

Type 96 (ZTZ-96) of the first serie now on display at the Beijing tank museum. This early model shows white painted rimmed roadwheels and probably was showcased in a annual revolution parade. At least 1,500 of this first serie was built until 2006.

Moroccan Type 96 VT-1A. At least 54 VT-1A are in service with the Royal Army of Morocco, and much improved compared to the average T-72, parallel to the T-80UM2, with combination protection of Composites and ERA and Western electronics. The model is quite secretive and photos are all but impossible to provide, however a relation is made with Norinco's latest export model VT-4/MBT 3000 showcased in a desert tan livery.

With a new German Leopard II based, water cooled diesel, this tanks has a power-to-weight ratio of about 27.78 hp/ton, which provides a far great speed than former models. Weight, depending on versions, is about 54 to 58 tons only... The 120 mm ZPT98 main gun can be replaced by a 125 mm capable of firing anti-tank missiles with folded wings. Armour is a standard equivalent to the third generation western and Russian MBT, electronics and computerized systems are also of high standard, making this little machine a very expensive one, at 16 million yuan apiece (equiv. to 1,6 M Euro or two M dollars...).

ZT-15 light tank in its initial estimated shape as seen in a comparative scheme with the ZTZ-99 and ZTZ-99A.

ZTQ-15 prototype, without its side skirts. As it seems, without identification number and the model logo, a black panther.

The turret superficially looked like to a lightened moded used on the VT-4. But after making the illustration, it appeared larger in all directions, possibly because of additional modular blocks. The ZTQ-15 is scheduled to replace completely the 1960s Type 62 light tank, including the Type 62G derivative. The core of the concept is a Chinese-made ZPT-83-II 'long barrel' 105 mm rifled cannon closely derived on NATO's own legendary L7 piece of ordnance, widely adopted in the late 1970s and 1980s for the new generation MBTs that transitioned towards the Type-90/96, such as the Type-69/79, and Type-80/88 and Type-59 upgrades.

The ZTQ-15 has been almost a shock for US Intelligence when it was revealed since nothing laked about it up until recently. It has been spotted in at least three main versions, including a basic one possibly the army prototype, very close to the serial production, a fully armored type, a marine type, and an export type called VT5. Since, the ZTQ-15 (introduced in 2015) has been dubbed the "mountain tank" and it has been devised mainly for the southern China sector, both hilly, mountainous and wet, calling for a light tank.

In a nutshell, the ZTQ-15 designed by the 201 institute and revealed by a CCTV documentary existed into two forms, a first 201 prototype and the pre-serie prototype 617 which has a different hull and turret shapes (notably the rear step over the engine). It is a jungle/swamp model also capable of dealing with the great heights of Tibet with an engine tailored to work in low oxygen conditions according to huanqiu.com. The weight should be around 30 tons, much more than the old Type 62, it features a hydropneumatic suspension to deal with the most unforgiving terrain, is able to defeat (with APFSDS) any T-55 or T-72 that can be thrown at it from Vietnam or India, is more easy to transport and amphibious although non-floating (so preparations needed and depth limited), and it is likely the chassis has been studied to be reused on a large variety of light vehicles well suited for many export deals. 100 built until 1995. 120 millimeter smoothbore gun. Transitional model abandoned after the end of the cold war. Other TDs were later built on the WZ551 wheeled vehicle.

Illustration of the Type 89 Tank destroyer by David Bocquelet

These are vehicles derived from the Type 63 APC, but with a conception that looks much at the Russian BMP-3 family.

ZBD-05. Tracked. Chinese Marines. Also called ZBD-2000 when it was introduced, this is the standard anmphibious IFV of the PLAN (Navy). Compared to converted vehicles like the Type 63H, this specialized vehicle is built for providing the greatest speed for the dangerous approach to the beach.

The PHZ-89 or Type 89 SPRML is a 122-mm rocket launcher tank based on the multi-purpose chassis also used by the Type 83 152-mm howitzer and Type 89 tank hunter. Chinese artillery corps have a dozen of unarmored trucks for this task, but the Type 89 was built specifically to be organically part of mobile frontline units, armored troops of the PLA and therefore has a high level of protection. The base launching system was developed from the Type 81 and it was first revealed publicly in 1999. It replaced the older Type 70 130-mm SPRML, and bears 40 launching tubes stacked at the rear. The massive box at the front is for reloads. So the vehicle can fire two volleys before it needs resupplying, which is done hydraulically in 2 minutes. The fire is assisted by sensors and a digital fire control system while the rockets can be fitted with a variety of warheads. 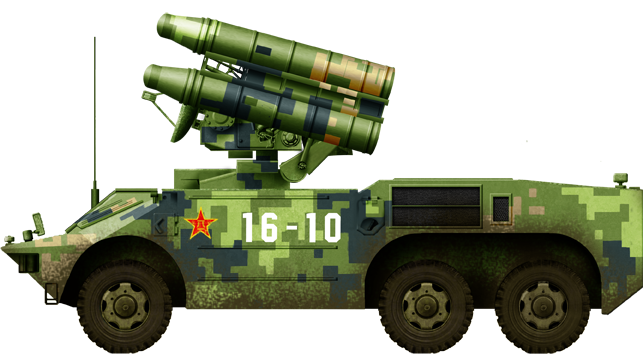 The 6x6 variant. Not difficult to spot here are four unlicenced copies of the Crotale short range SAM, after China first imported the Thomson-CSF Crotale missile in 1978-1979 for "evaluation". Hóng qí means "red flag" or "red banner". It was first used on the Type 052 destroyers (Luhu class). Thee institutes reverse-engineered all the systems and the HQ-7 was first tested in 1983, while production started in 1986-88, in two versions. The first called FM-80 was land-based and generally deployed around PLAGF airfields and PLA bases. The self-propelled 4x4 TELAR vehicle on a cloned Thomson-Hotchkiss P4R chassis was created by the 206th Institute and more recently, while in 1998 the HQ-7A (FM-90) for export made its debut. However around 2006 a new version appeared, the 6x6 HQ-7B. It was revealed in 2009 with and indigenous 6x6 armored chassis, and exported as the FM-90 (Pakistan purchased it). 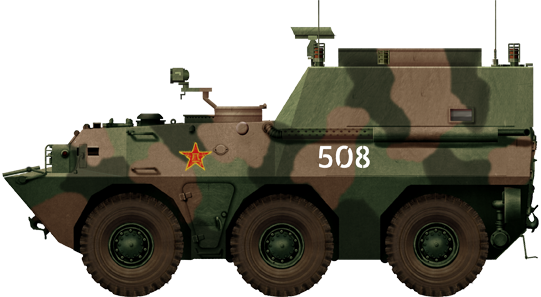 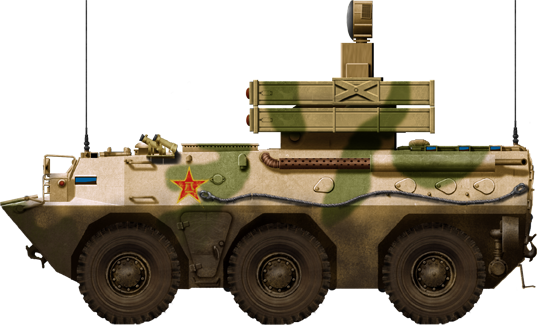