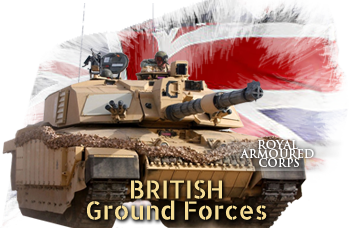 Like other NATO members, UK saw the end of the Soviet empire and dislocation of the Warsaw pact as a benediction (on political view) and a curse (on army staff view) since with the disappearance of a conventional war threat, budget cuts would further curtail the ground forces program, perhaps as those that hit the Royal Navy hard. Nevertheless, it coincided with the introduction of the latest main battle tank, the Challenger 2. This crown jewel shares a very few parts despite obvious similarities with the Challenger 1, now retired from service. New important AFVs joined the fray like the BAE AS.90 Braveheart SPG (1992), the Alvis FV 510 Warrior Infantry Fighting Vehicle (1988) production was already in full swing (780+ delivered), and the Alvis/BAE Stormer specialized vehicle series (1990) was also being introduced.

The first large conventional war for many European nations since ww2 came not from the ex-USSR, now collapsed, but Iraq. The press will rapidly turn it as the "fourth world's largest army", to boost sales. Indeed on the paper, both in the number of men under arms and tanks or all types, it was quite impressive and well experienced by ten years of war with Iran. Fearing to be embroiled in a long protracted war, General Schwarzkopf at the head of the coalition defined a masterfully planned deception, and the ground assault came long after the air war, to get supremacy in the air. A large percentage of Iraqi forces were destroyed this way, however Operation desert saber (the ground assault phase of Desert storm) saw the British Armoured forces committed in full force since ww2 or the 1956 Suez crisis: The entire 1st armoured division was deployed on the breach zone, west of the supposed attack direction, together with the US "armoured fist" formed by the 1st and 3rd US Armoured division, the "big red one" (1st Infantry Division), 1st US cavalry division, 2nd US armored cav regiment, which formed the VIIth corps. UK had the honor to make the opening for the ground assault phase, with the British Special Air Service's B squadron making an advance recon mission and surgical strikes. Later one, the thrust of the 1st British Armoured division was faultless and lightning fast, completely cutting off Iraqi Forces stationed around Kuwait in dug-in positions and out on the open. It showed the excellent combination of the Challenger with the new Warrior IFV, both capable to sustain high speeds on flat with excellent reliability. These vehicles were all modified by REME with sand filters and climatizers, additional Chobham armor blocks and ERA bricks, external fuel drums and a smoke generator. However spare parts supplies meant they suffer from a 22% attrition rate on arrival.

Most Challengers available were sent (4th brigade: 14th/20th King's Hussars, life guards squadron), but less well known is the fact that the 1st armored division still also counted many Chieftains, much slower. As the easternmost unit in the VII Corps, the 1st AD made its way straight into Kuwait and spearheaded the 350 km/97 hours advance. In doing so, they butchered the Iraqi 46th Mechanised Brigade, 52th Armoured Brigade and parts of three infantry divisions from the 7th Corps, capturing or destroying around 200 tanks and as many AFVs. Many fights occurred in sandstorms and low visibility, where TOGS and IR vision systems were proven invaluable, as well as the customary flair for long-range gunnery marksmanship. The ultimate result was 300 kills for no loss. UK was also part of the new coalition that took on to invade Iraq to expel Saddam Hussein from power on assumptions of large "mass destruction weapons" stockpiles hidden from the UN inspection teams. Whatever the reason, it gave the opportunity to the British 1st armored division once again to test its metal, in particular, the newly introduced the Challenger 2 main battle tank... The FRES Scout SV is a new family of tracked specialized vehicle that is replacing the Saxon, FV432 and CVR(T).

For main battle tanks, only upgrades for the Challenger 2 are Planned. No new model is known being studied. Upgrades also concerned the Warrior IFV, while the old CRV(T) series built by Alvis in the 1970-1980s are scheduled for replacement. However, the FV430 series IFV, are currently completely overhauled and improved with better engines and armor, renamed FV430 Mk.3 Bulldog (2006).
However, efforts have been put into smaller size AFVs. One of the most promising is the Future Rapid Effect System. This is a family of medium-weight armored vehicles intended to replace the Saxon, FV432 and CVR(T). Eventually, the FRES Scout SV and variants took over, while the ABSV is planning to replace mortar carriers.

The MAN Support vehicle, a £1.3Bn Support Vehicle (SV) procurement program, is aimed at giving the Army's logistical corps backbone some 7,285 new trucks and utility vehicles, all based on a common platform for better cost efficiency. This fleet, later reduced to 6,800 includes 288 recovery vehicles and 69 recovery trailers. The first already entered service since 2014. 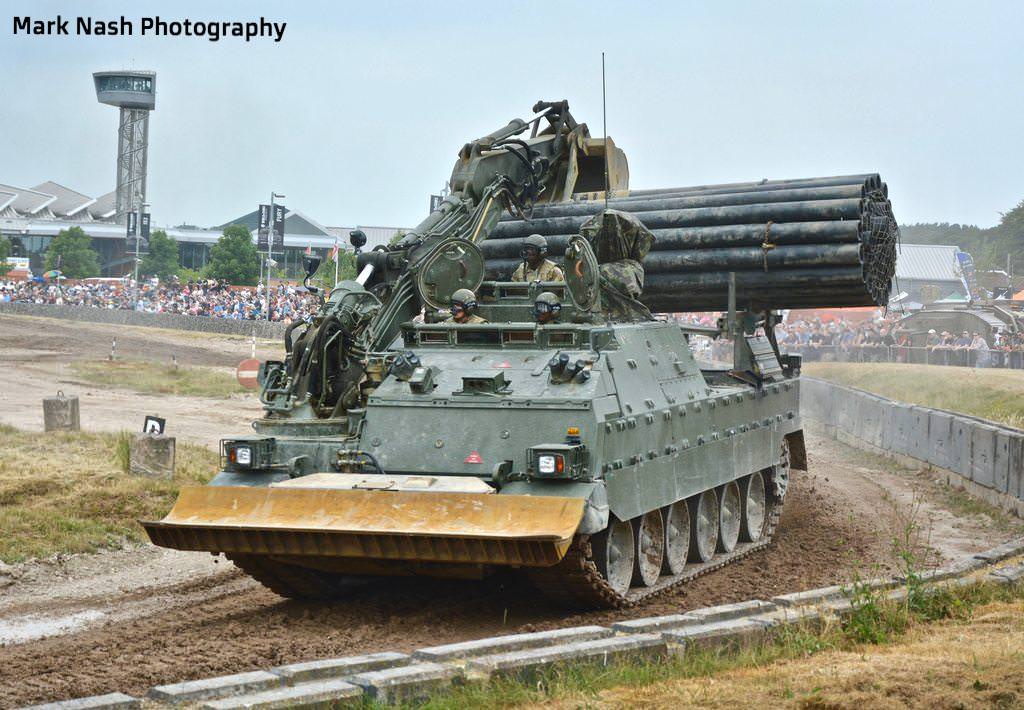 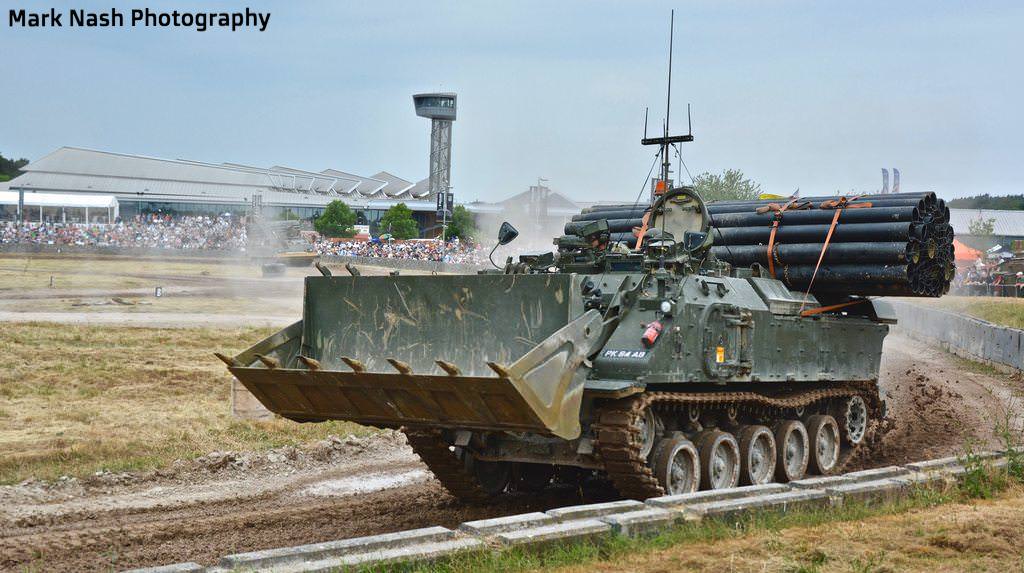 Two of the British Army's latest Armored Engineering Vehicles. The Trojan (top) and the Terrier Below. These photos were taken at Tankfest 2018, at teh Bovington Tank Museum, by Mark Nash.

Challenger 1 (1982)These MBT participated in the 1st gulf war and were in operation in Bosnia and Kosovo (IFOR/KFOR). Now all passed onto Jordanian service. Some derived specialized variants, however, are kept in service with the British Army.

Challenger 2 (1997) British actual main battle tank. (ill.: Challenger 2 TES, Basra, Iraq 2008). 446 were built total and are in service, but 38 more Challenger 2E were sold to Oman. They had been in action in Iraq and Afghanistan for years, but also in Kosovo.

AS-90 Braveheart (1992)117 of these self-propelled howitzers are in service, backed by 50 GMLRS (US-built) Multiple Rocket Launching vehicles. Protected Mobility Vehicles (PMVs)These were built for the post-invasion service in Iraq and Afghanistan. They are all MPV/MRAPs (mine/IED protected). These are 450 Mastiff (photos), 171 Ridgback, 125 Wolfhound and also 30 US-leased Cougars. The first three are British Conversions of the Force Protection Inc. Cougars. There are also 400 lighter, British built Foxhounds, and 578 Jackal MWMIK Coyote in two versions. 19 Buffalo were also leased to deal with mine as well as 13 British JCB HMEE (militarized bulldozers). Also 338 Husky MPVs were obtained from the USA. Warthog ATPMArticulated vehicles like 19 Vikings (well suited for deep snow) are provided for UAV support as well as some 115 Indonesian-built Warthogs. BAE StormerThis family of specialized vehicles comprised 62 Starstreak HVM SPAAML (22 more in storage), but also 29 "flatbed" versions with the Shielder minelaying system. The Stormer 30 recce (also based on the same chassis) vehicle is currently in final development phase to replace the CRV(T) family. SUPACAT ATMAlso developed by Alvis for special operations in Iraq and Afghanistan were lightweight, ultra-fast airborne vehicles and capable to carry height equipped infantrymen. Other, even lighter vehicles looking more tailored for entertainment than war are also in service like the Springer 4x2, and the Grizzly 450 Quads used by the SAS.