Background of the M4 prototype series

The previous ARL-44 was soon proven obsolete, mainly due to its antiquated chassis and suspensions system. While it was still in development, the next model was ordered in 1945 and AMX (Atelier de Construction d'Issy-les-Moulineaux) presented the project 141, later "M4" prototype. The blueprints showed a closely-related design to the German Tiger II, with overlapping wheels, a 90 mm Schneider gun and a sloped armor made of welded sections. In order to keep the weight at 30 tons, the hull was relatively small and the armor limited to 30 mm, which was equivalent to 40-50 mm with the slopes. This was found unacceptable by the Army which requested an increase in thickness and at the same time ordered two prototypes. AMX choose to study alternatives to the overlapping wheels to save weight and also decided quickly to use the oscillating turret developed by FAMH (Forges & Acieries de la Marine et d'Homécourt), also shared by the Panhard EBR, and most notably the famous AMX-13 Light Tank. The first prototype AMX-50 (50 relating to weight) was delivered in the fall of 1949 with a metric weight of 53.7 metric tonnes. During the winter of 1950, it was rearmed with a 100 mm. The second was equipped from the start with a new turret and a 100 mm gun (see later).

This second prototype was equipped with an auto-loading 100 mm main gun developed by the Arsenal de Tarbes. This gun was placed in an oscillating turret, a design theme that would that ran through many French tank designs of the era. Overall dimensions were identical to the first prototype, with an overall length of 10.43 m a width of 3.40 m and 3.41 meters of height, and the same metric weight.

The problem was the specified speed. The AMX-50 had to be quite fast, but there was no powerplant available then. 1200 hp was estimated, but the nearest output was procured by the redesigned Maybach HL 295 captured at the end of the war at Friedrichshafen by Joseph Molinié, as well as a Saurer diesel, both capable of 1000 hp, but both failing to deliver the requested ouptut (1200 hp or a hp/tonne ratio of over twenty). On trials (1951-1952) the observed maximum speed was about 51 kph. This made the 50/100 hardly qualified as a medium tank as first intended. 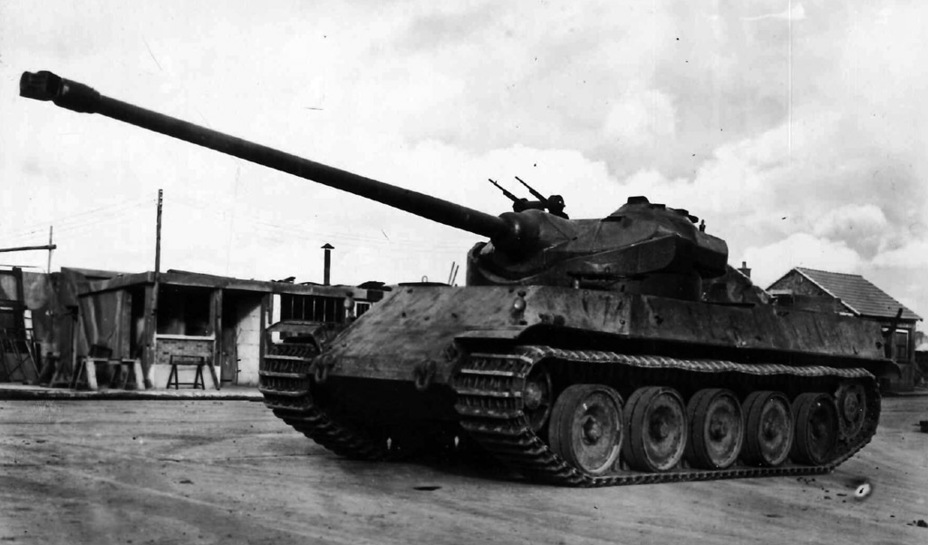 While the 100 mm version was in development, it appeared that Soviet heavy tanks like the IS-3 and successors possessed enough armor and firepower to defeat most western tanks in existence. At the same time, the M47 Patton mass-produced and then was supplied to NATO's countries, France included. The AMX-50/100 appeared quite redundant then, and it was decided in 1950 to upgrade the existing chassis and rearm it with a 120 mm gun. This called for it to re-classified as a heavy tank. 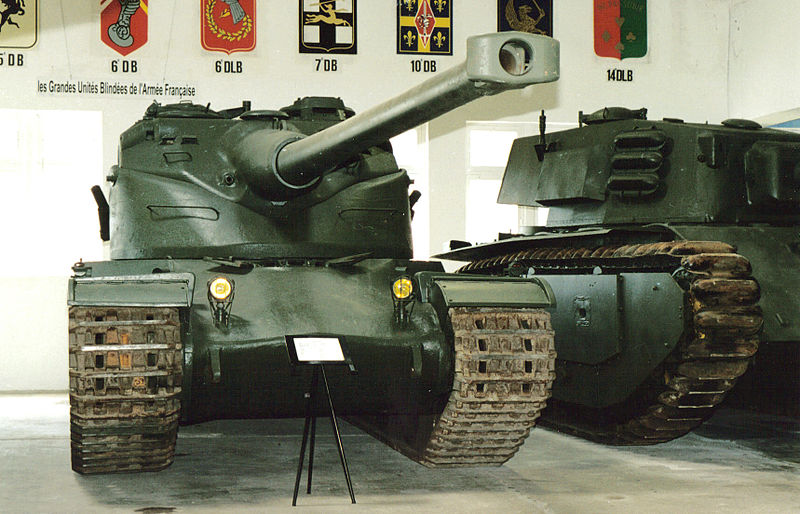 The main gun was a derivation by Atelier du Havre of an American gun, using the similar ammunition. The first prototype in 1954 had a standard cast turret with a "coaxial" 20 mm MG151 gun and .50 cal M2HB in an AA mounting on the turret roof. Up-armoured, it had an overall weight of 59,2 tonnes. A second one built in 1955 was even heavier with more armor. But the height was a problem, and a third prototype was eventually ordered in 1956 with a new oscillating turret. However, the space needed for the elevation, which was artificially created while raising the lower turret part, creating a shot trap in the process. The 120mm Auto-Loader was of a cassette magazine type, simply an enlarged version of the one found on the AMX-13s. Empty shells would be ejected out of the rear of the turret.

In theory, the derived Maybach engine was scheduled to deliver around 1200 hp but this caused many overheating problems and reliability issues and the lowered hull negated any attempt to upgrade the engine later. At the end it was decided to limit the output to 850 hp, giving a final 13 hp/ton ratio. The mobility issues were aggravated with the up-armored hull, the bow of which took influence from the IS-3's iconic pike-nose. These well sloped 120 mm thick frontal glacis plates proved immune to Soviet 120 mm rounds. 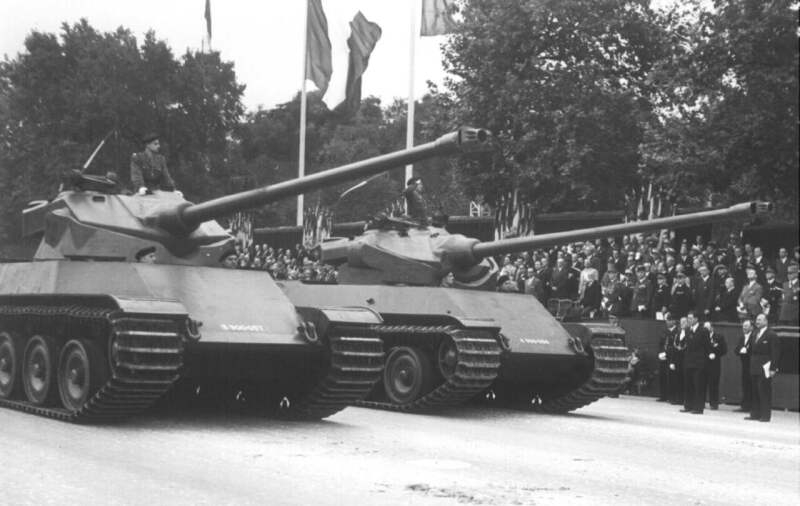 The 50/100's taking part in the 1950 Bastille Day parade, when it was widely thought to be Frances next tank. 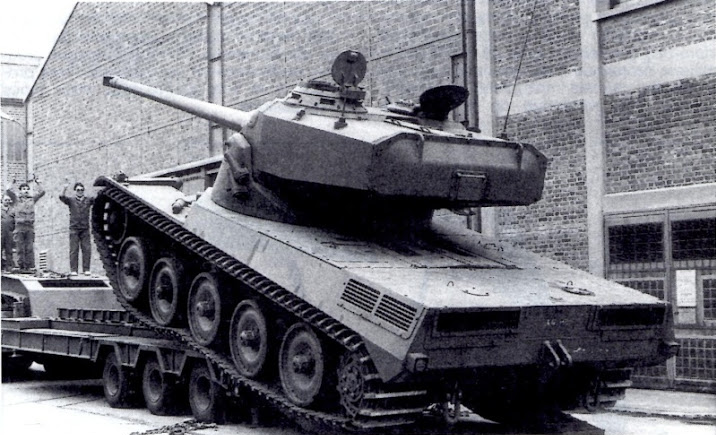 Ome of the 50/120 prototypes being loaded for road transport. Note the shell ejection shoot in the turret bustle. 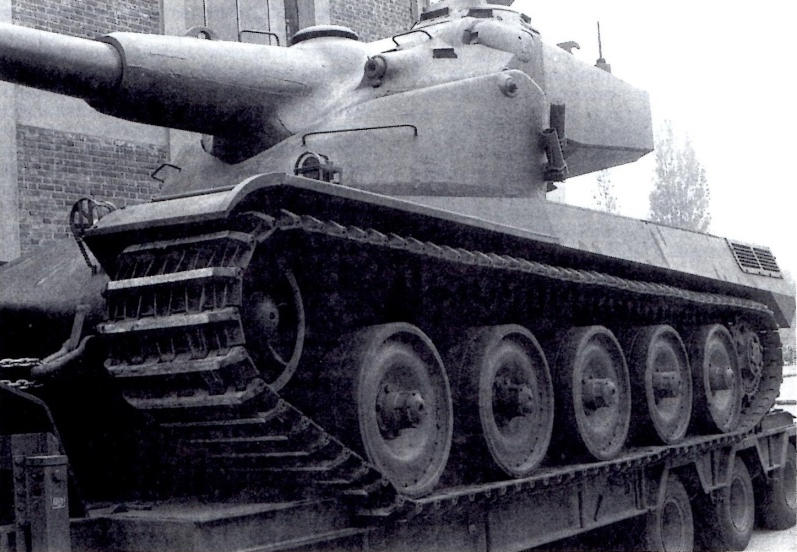 Close up of the left side tracks and suspension.

The Tank Designer's assumptions of superiority, of course, meant Great expectations were placed on the vehicle. This included the possibility of producing the tank in West Germany as well as in France. However, the rapid increase in capabilities of new ammunitions like the "G-type" hollow charge technology and prolongated attempts to solve problems with the powerplant delayed the order until 1955, and it was eventually terminated.

The project did go on to inspire the Swedish Military in their design of the ill-fated Kranvagn heavy tank project. Also, technology derived from that used in the 50/120 is currently used in the French Military's current Tank, the Leclerc. Today, only one prototype of the AMX-50 series survives. It is a 50/120, made from a mix of the partly cast hull prototype and the Tourelle D. It is currently on display at Saumur museum in France. 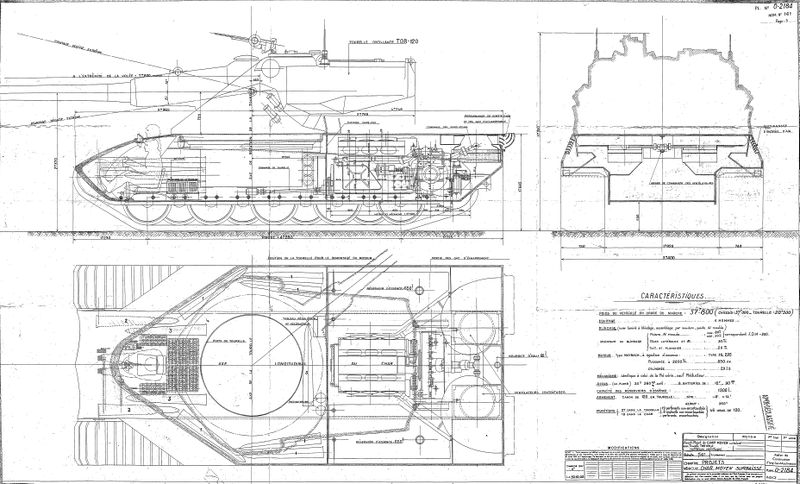 Blueprint of the AMX 50.

The first version, with a 100 mm main gun and oscillating turret

The second, final version, equipped with the 120 mm.