The schwerer Panzerspähwagen (7,5 cm) Sd. Kfz. 233, or simply know as the "Sd.Kfz.233" was part of the family of heavy reconnaissance 8x8 armored cars developed from 1937, starting with the Sd.Kfz. 231; It was developed in 1942 when the need arise in reconnaissance batallions to field a dedicated artillery support vehicle. The Sd.Kfz 233 armed with the ubiquitous 7,5 cm K37 L24 also shared by the early Panzer IV and either 119, 135 or even 199 vehicles were manufactured from July 1942 to October 1943 according to various sources.

Lineage of the Schwerer Panzerspähwagen

The Sd.Kfz.231 heavy reconnaissance 8x8 armored car was a part of the Schwerer Panzerspähwagen family of wheeled armoured vehicle designed entirely for ground reconnaissance in force, the "probe" of the Wehrmacht on an extended battlefield. The 6x4 early 1930s vehicles were replaced by 8x8 with the same designations, themselves replaced in WW2 nby a thord generation based on the much powerful Sd.Kfz 234.

-The 6x4 Sd.Kfz. 231 produced in 1930-36 was derived from Daimler-Benz, Büssing or Magirus chassis, but considered slow and underpowered, also lacking mobility. So a larger 8x8 vehicle was designed, produced from 1937 with a more powerful engine. These vehicles were caracterized by a small turrets ousing a single 20 mm autocannon to deal with most sof-skin and lightly armored vehicle, al well as a coaxial 7.92 mm MG 34. They started to equip all Aufklärungs units in 1939, alongside the older 6x4 model, and replaced them completely in 1942-43.

The Sd.Kfz. 232 was a 6x4 variant used for long range communication, carriying a Fu.Ger.11 SE 100 medium-range radio unit and a Fu.Spr.Ger.A short-range radio unit. Caracterized by its prominent "bedspring" antenna, it began to organically join already deployed reconnaissance units and soldiered well until 1942. it was built alongside the other specialized 6x4 Sd.Kfz. 263 radio vehicle (Funkspähwagen). They were all replaced by variants of the 8x8 family vehicles.

-The Panzerfunkwagen Sd. Kfz. 263 (8-rad) was a specially-design radio/command vehicle granted with a higher, specific superstructure, no turret, but armed with a ball-mounted single 7.92 mm MG 34.

-Last but not least, the Sd. Kfz. 233 was the first organic vehicle based on the same chassis, envisioned as a support vehicle with a more powerful armament, a short barrelled (L/24) 7.5 cm KwK 37 gun.

This move towards an organic, specialized support vehicle was a wartime product, started not before the war, but born in late 1941. Early reports from the offensive on the eastern front indeed indicated at the time that armoured reconnaissance units often encounter obstacles such as fortifications, notably equipped with antitank artillery, against which the puny 20 mm autonannon of the regular Sd.Kfz 231 could do little. These blocking points obliged to sent the already well-spread Luftwaffe just to allow the reconnaissance unit to go forward, and air support was not always very accurate, whereas a first hand view was a god's hand for artillery to deal with any strongpoint along the way. There were also other applications on hand.

Losses of lighty-armored SdKfz 231/232 also force this request for an upgraded heavy-class scout variant as the powerful 7.5cm (75mm) StuK L/24 tank-killing gun, with the right AP ammunition was also a potent anti-tank gun. The only issue with the design as projected, was in the poor ammunitin storage, eventually setup to just 32 projectile.

The idea of putting the heavy, but short and compact 7.5 cm KwK 37 gun, with stocks largely available on a modified version of the SdKfz 231 chassis was tempting, rather than to design a brand new vehicle. It had the advantage of a quick conversion, being rapidly deployed after minor modifications, and of a standardized vehicle for the already existing repair, maintenance and supply chain in the Wehrmacht. The latter solution was adopted as the new vehicle could be converted quickly on the readily avilable Sd.Kfz 263. Despite of this, the prototype was only approved in early 1942, and conversion performed in October.

For the conversion by Bussing-Nag, which was charged of the initial conversion, the open-topped superstructure of the Sd. Kfz. 263 (8-Rad) radio vehicle was the perfect basis (already produced by that same company). The roof was just removed, leaving a large oppen space exploitable to house the gun, and leaving the crew operating it in relatively good protection. Otherwise, the 233 was copy of the 263 with little change, the drivetrain, transmission, powerplant, armor protection and oher details were exactly the same as the regular 233; mostly with internal modifications. The radio compartments were transformed notably into ammunition holders. However the cramped space inside did not favored many ammunitions, but this was consistent with the vehicle's role.

The Sd.Kfz.233 was powered by a rear-mounted Büssing-NAG L8V-G V8 engine, liquid-cooled, and running on gasoline, with an output of 180 hp (133 kW). it was coupled with a Manual Büssing-NAG GS Gearbox with 6 speed Forward and Reverse.

This was equipped with a short barrelled (L/24) 7.5 cm KwK 37 gun also shared by the early Panzer VB and STUG-III. Both were in 1942 converted with dedicated antitank guns, providing a new stock of 75 mm guns. This gun was selected due its growing availability and proven capability. It was also demonstrated on the long-barreled StuK L/43 series.

The gun mount allowed -10 to +12 degrees in elevation, and a modest traverse of 12 degrees left and right of center, which still provided some leeway in actual range. The gunner used a fire control Optical sight Rblf 32, telescopic and foldable. It could be erected well above the gun for better view, while the gunner sat inside, safer.

In addition of the 7,5 cm Stu K (L/24), for which 32 rounds were embarked, there was onboard a secondary weapon, the MG 42 could be freely installed alongside the superstructure "bathtub" for AA or ground defense fire. 1500 rounds were provided in belts for it. The third weapon was the crew's own MP 38 pistols, with 192 rounds.

The lower part was the same as the regular 231 and 263 vehicles, with a max thickness ranginf from 0.2 to 0.57 in (5-14.5 mm). The armored front was 8 (lower slope) and 30 mm (nose), with the sides and rear also 8 mm (0.3 in) thick. The gun was protected with a squarish mantlet, and there was an armored shutter alongside it for the driver. The gun crew was protected by a shield behind the gun's mantlet, opened for the sight.

It started with a small-scale experiment, with just vehicles based on 231/232 chassis, all 8x8. Little os known of them, but they were ready by October 1942 and classed as the Sd.Kfz 233. After the project received the go-ahead, some updated 232s of the lat production received the short 7.5 cm KwK 37 L/24 gun in an open casemate. In total 109 vehicles were assembled in the Büssing-NAG factory (December 1942-October 1943).

109 vehicles built at the Büssing plant (December 1942-October 1943) plus 10 were converted from 263 chassis in October 1942 so 119 total made the bulk of these conversions. This variant of the Sd.Kfz. series entered service during 1942 and remained in use throughout the war. They were issued as a platoon of six vehicles in support of reconnaissance battalions.

The SdKfz 233 would carry a crew complement of four. Schichau was charged with its dedicated production also, leading to 129 dedicated vehicles delivered from July 1942 to October 1943. So in short, some were formed in emergency from the alternative SdKfz 263 communications carrier design, or new-build, which complicated the final count, varying between 119+129 and 199. These vehicles also carried radio kits as standard. 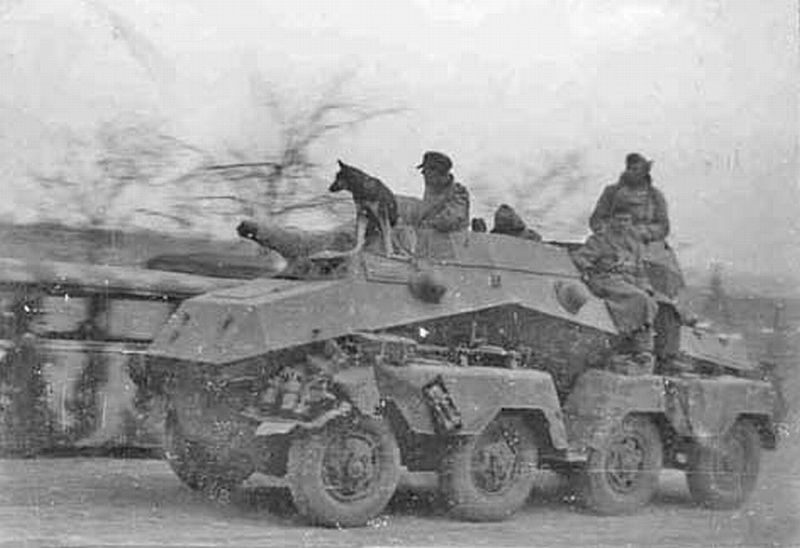 The Sd.Kfz 233 was used from the end of 1942, and remained active until the end of the war, grouped into platoons of 6 units, in support of the reconnaissance battalions. The typical on paper unit was for example K.St.N.1138 in November 1943: It featured six vehicles, a small staff of 5 Panzerführer officers, 6 Panzerschützen officers, and six Kraftwagenfahrer für gp.Kw. under orders from a Zugführer also tasked for radio contact with the HQ. The si vehicles were supported by three Lkw. 3t vehicles (most often Opel Blitz) and four men, two drivers and two armed co-drivers. 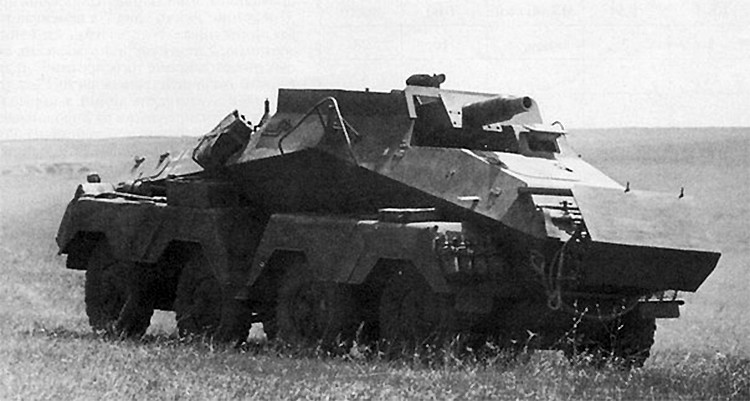 A vehicle presumably in Russia, early 1943 (flickr). Note the extra jerrycan holder a the front 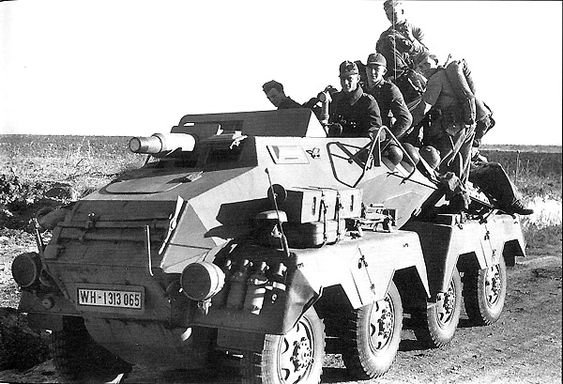 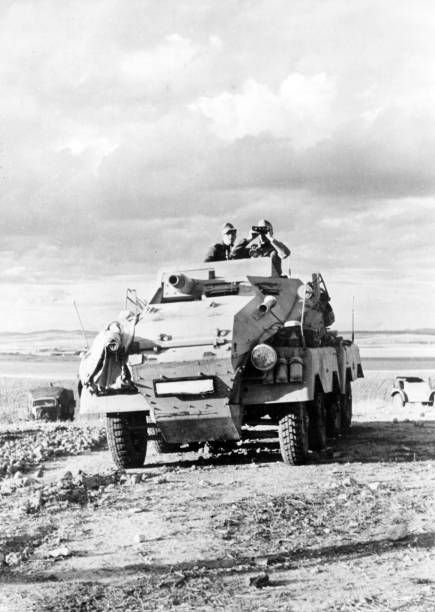 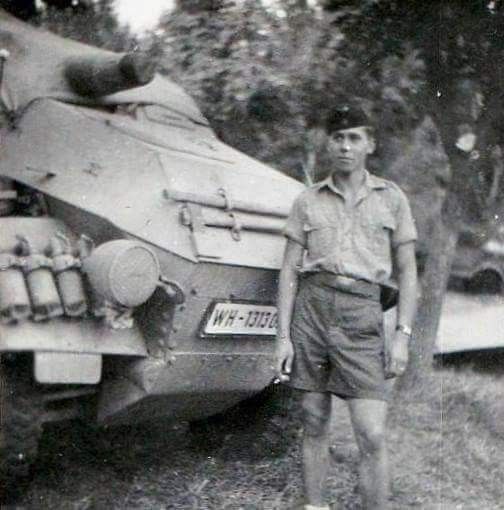 Crewmen posiing in front of his vehicle, possibly in the summer 1943, Russian front, or in Tunisia.

Stummel and catpured Panzer II in the background, Tunisia

Captured vehicle in the ardennes. It seems to have been camouflaged but not "winterized"