The LVTP-5 is a perfect example of a manufactured product that clearly makes functionality prime over any other consideration. Ugly and heavy, it was the direct evolution of a long line of LVTPs (Landing Vehicle, Track, Personnel) that served in the Pacific during ww2. Such experience was passed onto a new generation of vehicles. A brave attempt to modernize the concept of the type, the LVTP-5 was defined in the same period as FCM’s first armored personnel carriers in the early 1950s and entered service in 1956 with the USMC. Fully enclosed, it could carry 30-35 fully equipped marines, was 9 meters long for almost forty tons. Too late for the Korean war, the LVTP-5 seen extensive action during the Vietnam war.

The previous LVT(A)-5 (1945) was an assault support vehicle derived from the LVT(A)-4 with a powered turret and a gyrostabilizer for the 75 mm howitzer turret. (269 units produced, in service in time for the Korean war). The following postwar LVT-3C (1949) was related to the LVT-3, but with an armored roof, and with the bow extended to improve buoyancy. It was followed by the conversion of some 1,200 LVT-3 which participated in the Korean War. The LVT-4 LGTWGT (1945) was a conversion of which little is known. The US Marine corps launched specifications for a fully enclosed amphibious APC in 1947. Two main contractors answered in time and were able to deliver prototypes: BorgWarner company and FMC. The second generation started with the LVTPX3 (1950) and LVTPX2 (1952) prototypes. The former was designed by FMC in 1947, one of a number of experimental amtracs developed immediately after the war in an attempt to examine new approaches and configurations. However, none of these ever entered production until the Korean War, forcing the Navy to improvise with the LVT-3C. 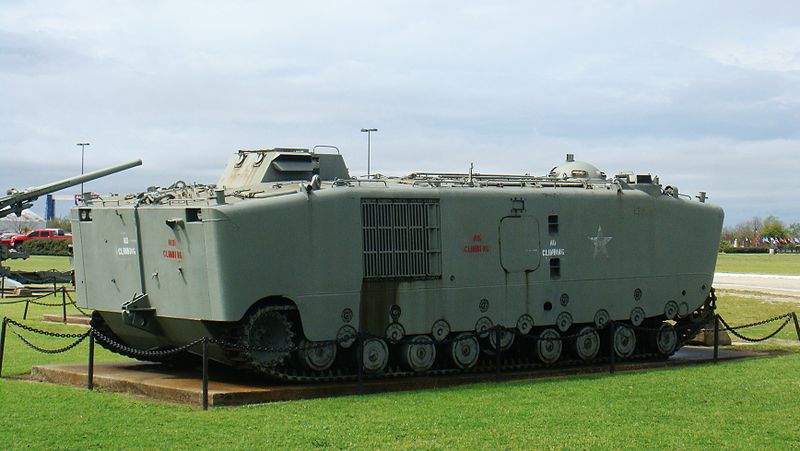 The latter was the rival project designed by the BorgWarner company in 1947. It had some engine modifications plus four types of transmissions tested as a total of five prototypes were produced. The LVTP-X2 (I) had a Cadillac Co. Model331 V-type 8-cylinder engine (187.5 hp). The LVTP-X2 (II) had the same GMC Inc. Model 302 series six-cylinder engine as the M59 prototype (127 horsepower, 3,350 rev/146 hp/3,600 rotation) which equipped with prototypes of the 2 groups. Only two have been manufactured. The LVTP-X2 (III) wad given the Chrysler Corp. V-type 8-cylinder engine (197 hp) and another of the same series tested the Chrysler "Powerflyte" automatic transmission. The LVTP-X2 (III-2) had the Chrysler Corp. V8 (197 hp) which was eventually selected for mass production vehicle and became the LVTP-6. The LVTP-X2 (III) was also given the same General Motors FS-301MG automatic transmission than the M59 prototype. The LVTP-6 will eventually be FMC's unsuccessful paralleled development for Borg-Warner's LVTP-5 Based on the Army M59 APC, but never entered mass production. 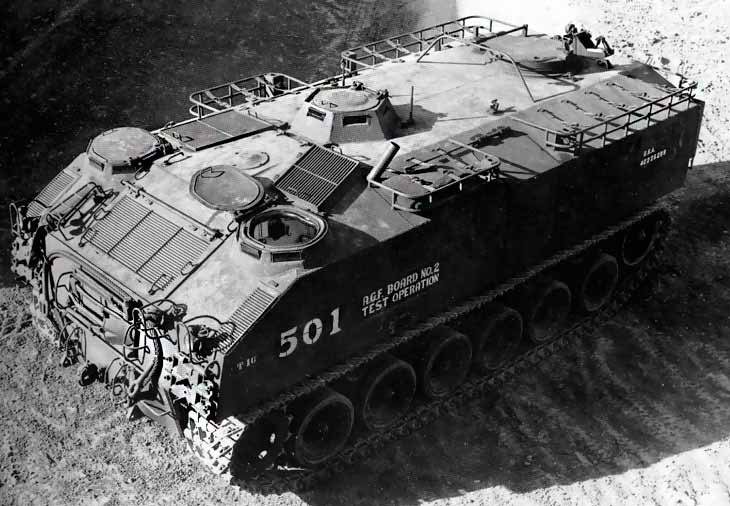 In size, the early FMC's M44 APC was what the nearest in terms of carrying capacity to the LVTP-5, with twenty-seven men plus the crew.

The new AMTRAC amphibious tractor/APC appeared with the conclusion of the war in Korea. Marine amphibian tractor units were in poor conditions, with a total of 539 LVTs of various models returning in a very bad shape. They were rebuilt yet again at Mare Island Navy Yard but were fast approaching the end of their useful life. Those that were in better shape were delivered to allied marine Forces under the MAP program, especially the Taiwanese and South Koreans, so new LVTs were required to cover even basic USMC needs. Even previously at the outbreak of the Korean war, the Naval Bureau of Ships decided to press ahead With a brand new LVT program based on the latest technologies and ongoing tests conducted since 1946. A contract in December 1950 was issued to the Ingersoll Products Division 01 of the Borg-Warner Corporation for the development of a new family of amtracs. Four variants were also to be derived from the basic design that came to be the LVTP-5, namely an artillery support vehicle, command and radio, air defence, recovery and combat engineering/minefield clearing vehicle. The new size of the Amtrack was also remarkable, at 35 tons unloaded and designed to carry 30-31 equipped Marines (that was the double of previous Amtracks).

The first prototype, LVTH-6 gun carrier was completed in August 1951. FMC parallel development (see above) was rejected because the Navy needs were too far away than the Navy and the M59 was just too small and only capable to cross large rivers and lakes, but not travel long distances if possible in rough seas and demanded better maneuverability in water. The M59 was therefore comprehensively rebuilt to improve its buoyancy and water propulsion characteristics. Meanwhile, trials of Borg-Warner amtracs were successful, concluding in 1952 with a production of the standardized LVTP-5 troop carrier (and LVTP6). Eventually, a decision was taken to press ahead with production LVTP-5 alone, whereas the smaller and cheaper LVTP-X2 was to be a design that might complement the LVTP-5 on the long run. A gun carrier and air defence version were soon developed, at the same time as the troop carrier. In 1956 eventually the FMC design was accepted for Marine service as the LVTP-6, but by that time, production of the LVTP-5 was almost complete and the awaited order never placed for mass production. So 1,124 LVTP-5s and 210 LVTH-6s were ultimately built until 1957. 58 LVTP-5S were later converted into command vehicles, redesignated LVTP-5, and a small number LVTE-1 engineering vehicle and 65 LVTR-l recovery vehicles saw the light of the day. Apparently, no LVTAA-l for air defense was ever built past the prototype stage. 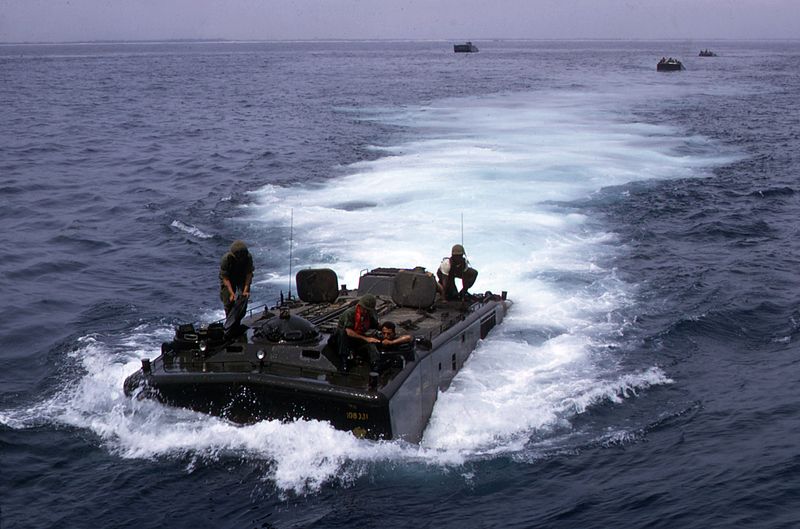 The general shape of the vehicle was indeed dictated by practicality, and the tracks imposed a parallelepipedic hull with smooth angles and slopes, which indeed looked almost like an average household fridge. It was easy to distinguish the vehicle from ww2 LVTs also, like the fully enclosed compartment, and low-slung tracks (and not all-enveloping tracks) that were reminiscent of a millipede. The 9 meters long hull was built of welded RHA steel, but the level of protection was light, about 8 mm at best. The top of the structure saw two cupolas at the front (driver and commander, left and right) while the main compartment was extended from the front to the rear without interruption but for the storage, fuel tanks, and of course the engine compartment at the rear end. The troops disembarked from the frontal ramp like any LST. The bay was large enough to accommodate a jeep. The LVTP-5 existed as an unarmed cargo version as well as a personnel transport, with an MG cupola for ground support located at the front of the roof.

The Driver sat in the bow, port (left) side, while the Commander sat at the starboard bow, and the third member, sometimes called Assistant Driver but acting as a Gunner depending on the type was seated on the left and was given a cupola with the 0.3 cal. M1919A4 machine gun. The vehicle capacity was between 25 and 34 fully equipped Marines, seated in four rows of folding bench seats. The central row was back to back. But when folded or dismounted, as many as 45 passengers could be transported standing up. This was even the usual practice in Vietnam, the exception being shore duty over extended distances. Payload was impressive, 12,000lbs when swimming for buoyancy reasons, but up to 18,000lbs on firm ground. The loading ramp was lowered by electrically powered cable, with a manual backup. However, there were also large hinged doors on the roof when at sea. For the crew exit/access, four more hatches were placed on the roof, behind the hinged doors and at the rear.

Propulsion was assumed by a Continental V-12, which was a sturdy liquid-cooled gasoline engine, which remained constant throughout the years but for a few exhaust and air intake modifications, along with a revised roof vent system in the late production. However, during and after development, a number of suspension and powertrain problems soon plagued the early LVTP-5 until full deployment in 1956. The LVTP-5 shared their transmission with the M47 and M48 tanks, but due to their powertrain configuration, the final drives were about 3 feet below the transmission output shafts, requiring a dropgear assembly to couple the final drives and transmissions, proving a frequent source of mechanical failures. Improvements to these, as well as the additional box snorkel and top deck ventilators solved part of these problems, designated LVTP-5A1, and LVTH-6Al.

LVTE-1: The engineering variant. It was given a large toothed V-shaped excavator blade mounted on the nose of the vehicle, that could clear its path through a minefield 3.7 m wide and up to 0.41 m deep. Plastic-foam buoyancy tanks were also fitted in the inside if the blade to keep the nose up when swimming. On the roof was mounted a rocket-propelled line charge, elevated hydraulically. A 0.3 cal. machine gun cupola was maintained between the driver and commander's ones. Late production vehicles were given a Continental AVI-1790-8 12 cylinder fuel injected gasoline also shared by the M48A2 tank. They did lack the recessed radiators on the sides or the exhaust and air intake protections on the roof. 41 were built in total.
LVTC-5 : Landing Vehicle, Tracked, Command, command vehicle.
LVTH-6 : Landing Vehicle, Tracked, Howitzer- fire support variant armed with M49 105 mm howitzer. 210 units built.
LVTR-1 : Landing Vehicle, Tracked, Recovery- recovery vehicle. 65 units built.
LVTAA-X1 : Landing Vehicle, Tracked, Anti-Aircraft variant, to be fitted with the turret of the M42 Duster. Prototype only.

During the Vietnam war, the 1st and 3d Amphibian Tractor Battalions were deployed with the USMC 3rd and 1st Divisions. The nature of the fighting in Vietnam was ill-suited for traditional amtrac operations, as there were few contested beach assaults. The amtracs were very large and bulky and on land the nimbler M113 were preferred as troop transports. Although they were considerably more durable than amtracs of ww2, LVTP-5s were not intended for prolonged land operations as their torsilastic suspensions suffered from excessive wear on an uneven ground they were not designed for.

The powertrain was equally difficult to serve and worn-out engine or transmission took an entire day to be replaced. The biggest issue was the configuration of the fuel cells in the floor: In Vietnam, landmines were a constant danger for AFVs, so much so that troops often preferred to ride on the roof rather inside; As noted, a mine detonation under an LVTP-5 belly often set alight the petrol tanks, causing mayhem in the crew compartment. As a result, the use of amtracs was restricted or the command gave them only specific terrain-oriented missions suited to their profile such as coastline and riverbanks patrols, coastal operations and supply cargo from rear areas, or sea-to-shore transport from the fleet. The basic troop carrier saw active service but the other variants also, if not perhaps more, like the LVTH-6A 1 frequently used for indirect artillery support. 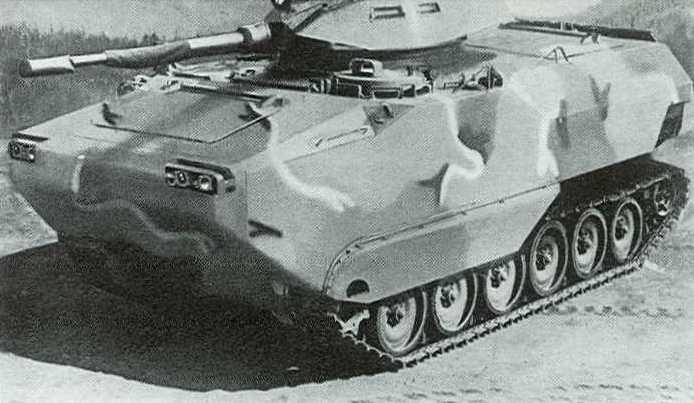 Rare LVTP-X developed by FMC, competing against the current LVTP-7. The LVTP-7 was the result of these Vietnam lessons, and this process began as early as 1963. FMC but also Chrysler participated in it, and specifications called notably for a much longer service life (15 years as designed for the LVTP-5), ease of maintenance and base versatility. A lot of effort was also put in the design of a more land-oriented or land-capable suspensions and drivetrain. This is another chapter that we will tackle one day, but the experience and lessons eventually gave after a long development a much better vehicle which is today still in service and probably will remain so for years.

The LVTP-5 on wikipedia
Old archive on oocities
amtrac.org
Another development article
The AFV Kit (article)

LVTP-5 seen from the other side "Who's Next"

LVTE-1 'Potato Digger' used for engineer support and minefield breaching, fitted with a combination bulldozer blade/mine rake in the front. The large structure on the roof is the launcher for the rocket~propelled demolition line charge (FMC Corp.)

LVTPH-6 or LVTH-6A1 gun carrier, fitted with the 105 mm howitzer to provide artillery support during amtrac operations. Could carry 151 rounds stored in racks, plus 150 canistered rounds in the cargo hold, during land operations. For safety, no more than 100 rounds were usually carried. 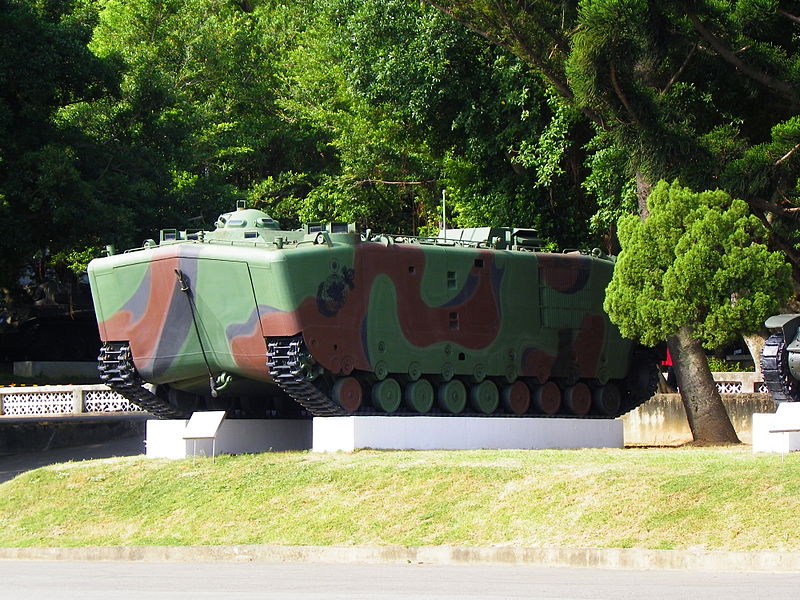 Disembarking from a LST 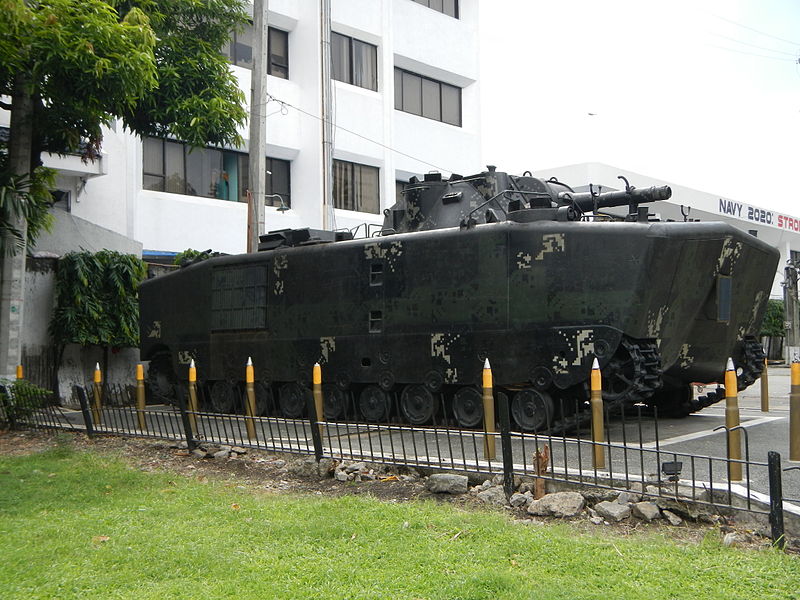 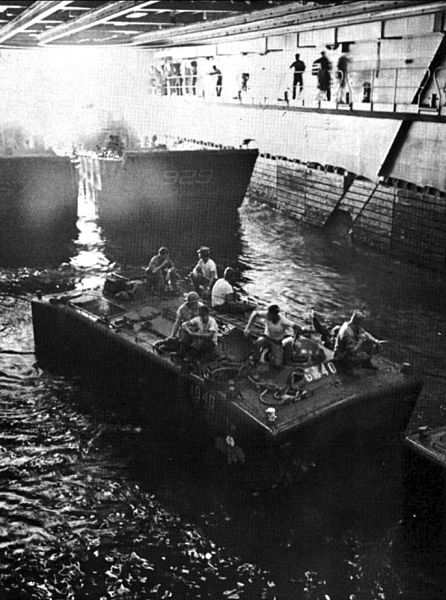