In early 1938, the Regio Esercito (Italian Royal Army) made a request for a new armored vehicle. It would replace the venerable Lancia-Ansaldo cars, which roamed Italian colonies and were still part of regular provisions of ground forces. The only armored car available then, in any great numbers, were the Lancia IZMs, a souped-up version of the WW1 Lancia-Ansaldo model 1918. But these cars were underpowered and had poor off-road capabilities. The Italian firm SPA, which already produced many trucks and tankettes for the Regio Esercito, came with a four-wheel drive, four-wheel steering armored car concept, the AB 40 (Autoblinda 1940). It had to fulfill the need for a fast and versatile car for Italian colonial police and Italian cavalry, which also issued a similar specification. 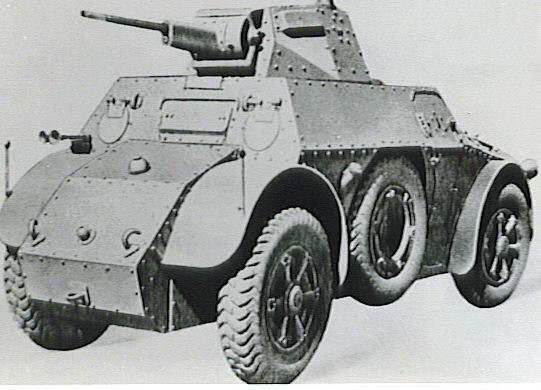 Apart from the four wheel transmission drive, which was revolutionary at the time, but also troublesome, the main features of the Autoblinda AB 40 were an all-riveted hull with sloped armor, a rear engine, two side doors and a twin machine gun turret. The wheels were specially designed to be stripped of their rubber band and used on rails, and two spare wheels were mounted in the center, which could rotate freely and ensure rides on rough terrains and the climbing of all kinds of obstacles. Armor was relatively thin, although thicker than that of the CV-33 tankettes, because speed was a priority from the start.

The Autoblinda AB 40 was the first model produced, however in feeble quantity, with only 25 built. Its main feature was its twin machine gun, low-profile turret. There was no radio at first, only flag bearing poles installed on the four fenders for signals and units identification. The AB 40 was propelled by a Fiat SPA ABM 6-cylinder water-cooled inline gasoline engine. Production began in mid-1940. The handful of them played a minor role in the Italian invasion attempt of southern France, in June 1940. They were sent in Libya soon afterward. However, in the fall of 1940, a new specification requested a modified version, equipped with a high velocity, quick firing Breda 20 mm (0.79 in) autocannon. The fast solution was adapt the L6/40 tank turret, which allowed cheaper production with standardized parts. The prototype was thoroughly tested. Production in limited quantities followed, but proved also that this formula was much more potent, and ultimately the upcoming series of the AB 40 were converted to this new version, the AB 41.

The Autoblinda AB 41, which entered production in early 1941, had a new armament, with one 20 mm (0.79 in) high-velocity antitank gun, one coaxial 8 mm (0.31 in) Breda modello 1938 machine-gun and yet another one located at the rear of the hull. A new SPA engine was needed to cope with the additional weight of the turret, producing 120 horsepower. This extra power not only permitted to maintain the speed, but its higher torque also provided better off-road capacities. Most AB 41s received this new engine in mid-1942. The complicated four-wheel drive, four-wheel steering system needed a rear driver, the two drivers manning the six forward gears and four reverse gears. It was never really practical in operations. All AB 41s were fitted with a good radio and a tall, folded antenna, to be used as scout vehicles. They proved highly valuable in desert operations.

They were also other flaws. The powerplant was difficult to access, the fuel tank was unprotected. Also, there was no separation between the crew and the engine compartment, making the interior noisy and very hot, despite extra ventilation to cope with the climate in Italian colonies. The turret inherited from the L6/40 tank was a one-man turret, the commander also acting as loader and gunner for both the 20 mm (0.79 in) and its coaxial machine-gun. Provision was 2600 rounds. The Autoblinda AB 41, however, was considered successful, and 550 were built, until the Italians surrendered. Many later saw service under German colors.

The AB 43 came from the idea of using the Austrian Cannone da 47/32 M35, 47 mm (1.85 in) high velocity gun, equipped with Effetto Pronto (HEAT) rounds, which proved deadly in Africa. A brand new turret was needed, but as a provisional measure, the converted prototype hull was open-topped, with the CD M35 mounted protected by a mask. Only a few were built prior to the armistice, perhaps 12 in all. Another trial variant was equipped with the German AT 50 mm (1.97 in) armor-piercing gun, but never came into production. Nevertheless, perhaps 120 units of the AB 43 were produced under German supervision after September 1943, as well as a slightly improved, late version of the AB 41, which served alongside 47 confiscated AB 41s. They served with the Wehrmacht as Panzerspahwagen AB41 201(i). 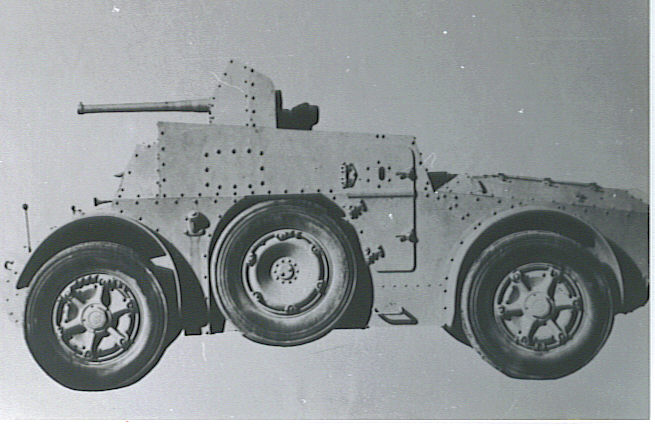 The rail version, called AB 41 Ferroviaria, was used in limited quantities, mostly in the Balkans, in anti-partisan patrols. Ultimately, the most common sub-version of the AB 43 was the command car, open-topped and equipped with powerful radios, also serving as advanced artillery spotting vehicles. All AB 41s could be fitted quickly with sand tires

The most successful version of the AB 41 was the SPA-Viberti AS.42 "Sahariana", initially built for the Bersaglieri in Africa. This was a lightweight, tropicalized open version, enhanced for very long range reconnaissance patrols, based on the chassis and engine of the AB 41. They came from a request of African units for an equivalent vehicle to those used by the successful British LRDG. Saharianas were characterized by their extra fuel tanks, covering their entire length in two rows, and impressive armament, which included 8 mm (0.31 in) Breda machine-guns, 20 mm (0.79 in) Breda or Solothurn AT gun, and the 37 mm (1.46 in) Breda 47/32. Total amount of extra fuel was 400 liters, plus 80 liters of water. Production numbers are unknown.

The Autoblinda ABs in operations 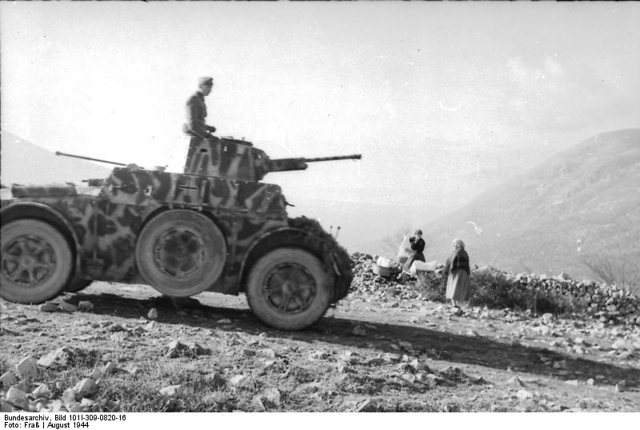 As the AB 40 saw little service before being converted to the AB 41 standard, Italian war records mention only the AB 41y, as virtually all AB 43s served with the Wehrmacht. A large part of the armored cars produced were sent to the Colonies for police duties, in eastern Africa and Abyssinia, as well as Libya. However, around 300 were used by the Bersaglieri, and others by cavalry reconnaissance units of the Regio Esercito, with companies of three platoons of four cars each. They fought well in North Africa, in the Balkans, Hungary, and on the Eastern Front. Normal duties comprised patrols, scouting and escort. Despite their high profile and difficult transmission, they performed well due to their range, speed and armament. Some surviving AB 41s of the Germano-Italian forces of Rommel fought valiantly in Tunisia, and some also saw service in italy. After the armistice, both captured units and new ones (AB 43) fought in the Wehrmacht, which found them suitable for the average Italian roads.

Autoblinda AB 40, December 1940, Libya. One of the very first units equipped with AB 40s committed in operations. It was soon replaced by the AB 41, and all machines were converted.

Autoblinda AB 41, February 1941, Libya. The sand beige tone was the most common in Africa, but a variety of complex spotted patterns were also tried later.

Autoblinda AB 41 of the long range reconnaissance patrols of the Bersaglieri, a cavalry unit attached to the Ariete Division, Libya, May 1941.

Autoblinda AB 43, November 1943, Italy. None of the AB 43s produced were used in Tunisia, most serving with the Wehrmacht in Italy, but also the Italian forces of the puppet government of Salo. It was essentially a late modified version which succeed to the abandoned 47 mm gun carrier series.