The Genesis of Dutch AFVs

During WWI, the Dutch remained neutral and therefore did not have the feel to develop a tank force, at least on its national territory. Only armored cars were retained for patrol and police duties. When WWII started, the growing defence budget was mostly attributed to the KNIL, the Dutch East Indies Army, and its sizeable navy, at least to help modernize it.

Soldiers of the Landmacht in 1937. The puttees and helmet shape, as well as the specific uniform colors, are distinctive.

Being a colonial empire and despite its limited resources and population, the Dutch had to fight both the Germans and the Japanese. The resources allocated for the Koninklijke Landmacht (KL), or "Royal Army", were way below the level needed to be able to fight the German Army. Despite all odds, the Dutch succeeded in some areas in holding back the German forces for three days. The 1st Corps was the force strategic reserve, located in the Vesting Holland, around The Hague, Leiden, Haarlem and in the Westland. Although secondary in the German attack plan, the only concerns were to avoid the Liege corridor and securing the route through Limburg.

For that, the 18th Army and the 9th Panzer Division were committed to the action. The 9th PZD was to break through the so-called Grebbeline, above the Rhine, and hold a crossing on the Afsluitdijk river. This unit was then ordered to aim for the Moerdijk Bridge in Southern Holland. At the same time, the 22nd Air Landing Division and 7th Fliegerdivision were to land around the Hague and capture Queen Wilhelmina, the government and General Staff in one stroke. Even before operation began, German officers had no difficulties spotting all the bunkers and defensive position on the border, which entered the sights of the artillery. The small Dutch Air Force was the first to be dealt with (only about 70 fighters of the Fokker D.XXI/D.XVII and twin-boom G.I types and obsolete biplanes for light bombing/recce).

In the first hours of May 10, 1940, German forces were trying to secure bridges at Ijssel and Maas. However, the bridges had been destroyed in all but a few areas, and progression was hindered by pillboxes and fortified positions. Paratroopers succeeded to capture the airfields of Waalhaven (near Rotterdam), Ypenburg, Ockenburg and Valkenburg (around the Hague) but were kept out of the Hague by a resolute defense. However, three airfield were recaptured by the Dutch in the evening. But the bulk of the fighting took place at Grebbeberg, the only possible path around on-purpose flooded areas. In this area, the Dutch had an outpost line, main defense line and stop line as a backup with reserves to block any possible breakthrough. On May 11 because of stiff resistance, the SS regiment "Der Führer" only secured the northern section of the first line and all outposts by the evening. The next day a major battle on the Kornwerderzand started, and also held back the German forces for days (in fact until the official surrender) due to its network of mutually supported bunkers.

The Battle of the Afsluitdijk - one of the bunkers of the Kornwerderzand complex.

On May 13, French reinforcements from the south were inefficient due to a lack of communications with Dutch Forces and the blocked Moerdijk Bridge, and eventually were brushed aside by the 9th Panzer Division which linked with the paratroopers but failed to enter Rotterdam, meeting fierce resistance. On May 13, the last line of defence of the Grebbe line (stop line) collapsed, nothing else preventing the German troops from reaching the sea except for a hastily-prepared Waterlinie (Water Line).

Surrounded, Rotterdam received an ultimatum, which was rejected, although a second one was signed while bombers carried out their mission, not seeing the warning flares. The bombing of Rotterdam after an official surrender raised a wave of international indignation. The official surrender came on May, 19, signed by General Winkelman. However, even after that, the Dutch still had powerful assets in their East Indies colonial empire.

What was left of the KNIL in 1944 found itself at war against Indonesian nationalists...

Overwalwagen forum, one of the best source about KNIL vehicles About the Koninklijke Landmacht 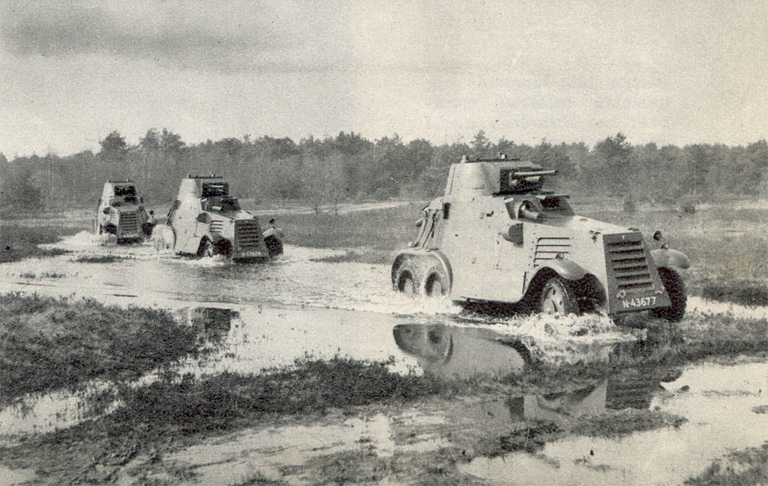 On of the Vickers 1938 model light tanks delivered to the KNIL. 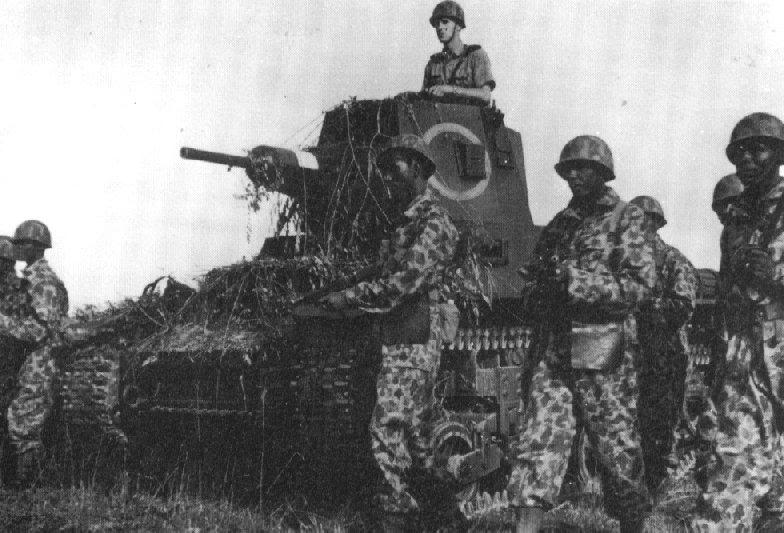 - Marmon-Herrington MTLS: of the 200 ordered, only 19 were delivered after the fall of Java in 1942, taking part in the defence of Suriname.

- Marmon-Herrington CTMS: 200 ordered, 31 delivered in late 1941.
- Marmon-Herrington CTLS: 194 ordered, 20-24 unloaded in march 1942, just in time for the fight, and 39 more later.
- Vickers light amphibious tanks: Two ordered and delivered in 1937.
- Vickers light tanks: two ordered and delivered in 1937. 73 ordered in 1938, 20 delivered but the remainder (49) were confiscated by the British Government at the outbreak of the war. Used locally as "Dutchmen". Later in 1941, 49 South-African armoured cars were shipped to Java in compensation.

- Stadswacht Overvalwagen: early 1940 - 90? built from the Homeguards, based on a Chevrolet 4x2 chassis.