Like other nations, Italy in the Cold War needed a way to deal with air attacks, from low-flying jet aircraft but also helicopters, and the usual answer was to devise a two-stage protection, with SPAAML for the greater range, and SPAAGs for slower targets or those at closer range. Probably the most successful were the German Gepard and the American M163 VADS for NATO and for the Warsaw pact, the ZSU-23-4 "Shilka".

Side view of the SIDAM 25 SPAAG

No initiative came from the Army as it was originally a private development program funded by the prime contractor OTO BREDA (Formerly OTO Melara). Later official support came from the Italian Ministry of Defense and an order was soon obtained. The M113 chassis then built under license was chosen as it was a local production and allowed for a cheap supply of parts and easy maintenance and training. However, to carry the impressive quad system, a large array of modifications had to be carried out including the removal of the single fuel tank replaced with twin tanks either side of the new engine and uprated suspension to cope with the increased weight. (New suspension rated to 15,000kg) This M113 is sometimes referred to as a M113A2. The project to fit the SIDAM system started in about 1980 and first two prototypes were trialed in 1983. In total 276 of such systems were produced from 1985, still active today. The SIDAM was manufactured at La Spezia, and major subcontractors included ALENIA, Örlikon Italiana and Officine Galileo. Unit price was $4.308 million in 1997.

General Configuration The primary system was meant for defense against helicopters, some missiles, and low-flying aircraft but it was provided a secondary capability against lightly armored targets. For this, the hull had to be given a 1,48 m opening and reinforced, and an auxiliary engine was provided to move the 3.200 kg heavy turret. The driver was located as in the regular M113, but the crew compartment was to support the turret and its basket (in which was seated the gun operator and commander), whereas behind at the rear was seated the radar operator. The turret is also made from aluminum armor.

Interior configuration with the driver (front), commander/gunner in the turret and FCS operator (rear)

The SIDAM hull was made like standard M113s with reinforced aluminum, up to 38mm thick, slab-sided but with a sloped nose. The rear doors were kept to allow the crew to exit more easily and supply ammunitions. It was propelled by a sturdy Detroit 6V-53T Diesel that developed 215 hp (160 kW) through a TX-100 automatic gearbox with a top speed of 68 kph on the flat, for a 500 km range. The drivetrain comprised five rubber-clad roadwheels, without return rollers, with front sprockets and rear idlers and torsion-bar suspension units. Field performances showed it can climb a Gradient of 60%, 30% side slope, 0.6 m vertical step, or gap 1.7 m trench. Despite being amphibious, it can ford up to 1.5m of water but not swim due to its heavy weight. There is no indication of an NBC protection.

Although the initial system was to count only two cannons, firepower was the main consideration that pushed to the adoption eventually of a quad system. These were Oerlikon KBA (a German manufacturer, which is now part of Rheinmetall Air Defence AG) guns produced under license in Italy, fed by 600 rounds total stored inside the vehicle. These guns can fire at 2,500 m (8,200 ft) accurately (max range about 5000 m), at a 2,400 rate per minute combined (570 rounds per minute per cannon). These guns usually fire short 15 - 25 round bursts. Ammo is of the HE-Frag type, but in extreme cases, it can engage also ground targets due to a supply of only 30 armor-piercing, even APDS (Armour Piercing Discarding Sabot) rounds according to the Italian source.

The turret is given a 360° traverse, with 87° elevation and 15° depression. The SIDAM has an optronic fire control system coupled with a laser rangefinder for accuracy. However, due to the lack of radar, this reduces its targeting capability in deteriorated weather conditions. However, its sole advantage is to not warn the pilot that he has been spotted. In addition, this FCS is provided with a night vision equipment and a digital ballistic computer that adapt itself to various targets.

The SIDAM-25 was accepted to service with the Italian Army in 1987 and as for January 1, 1997, a total of 276 SIDAM 25 systems had been delivered. It is therefore still in widespread service among armored and motorized units of the Italian Army. It is fair to tell that the lack of radar was also compensated by a very large production. To compare, the French in the 1980s had only 60 SPAAGs and the Netherlands 95 Gepards. There is no evidence this vehicle was deployed outside Italy yet. It should be added that the M163 VADS, despite using many common parts, was considered but rejected by Italy. The SIDAM-25 is the only quad-gun based on the M113 of this configuration in service (The M163 has a much more compact configuration), and despite the large worldwide availability of the M113 has never been marketed for conversion exports by OTO Breda, as far as the archives and research can tell. The SIDAM-25 system, on the other hand, has been mounted on the Spanish Pegaso BMR 35-60 and can also be carried on the Brazilian Engesa Urutu EE-11, the Oto-Melara C-13 and VCC-MC80 IFV. Factory photo of the SIDAM-25. 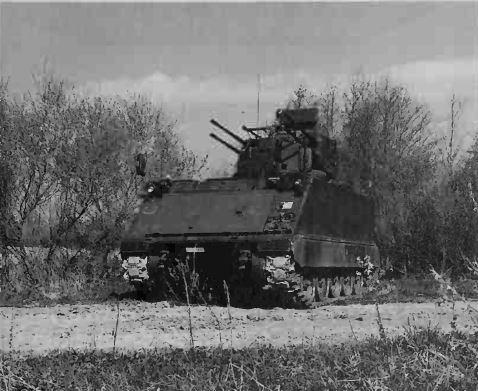 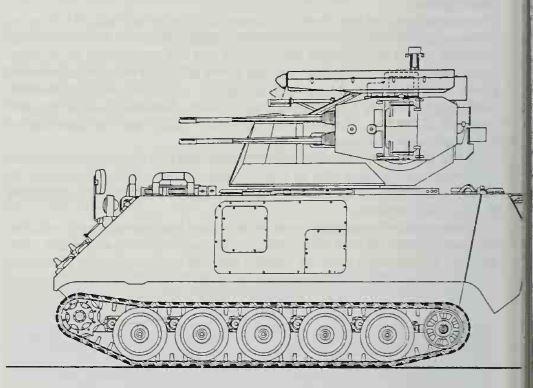 The SIDAM 25 with added Mistral missiles 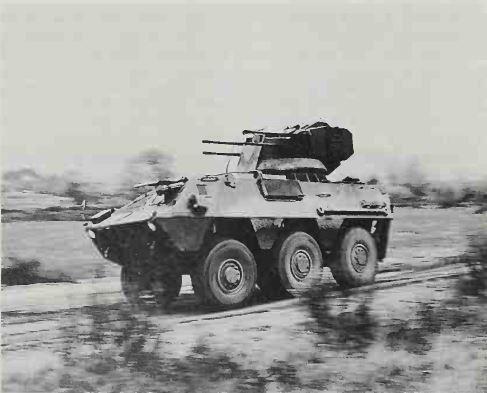