Vickers, alongside its best seller, the tankette Mk.VI, also produced light scout tanks in limited numbers for the needs of the Royal Army. These started with the Mk.I (1929), the Mk.II and III (1931-34). Then came the Mk.IV, largely inspired by the former (1934) and followed by the next Mk.V, which marked a real step forward with a three-man crew and the larger hull required to operate an improved armament, the Vickers cal.50 (12.7 mm) heavy machine gun. The Mk.VI was logically based on this model, with a higher degree of standardization, which allowed moderately low prices.

Although sharing most of its components (hull, tracks, drivetrain, suspensions, fittings, armour and armament) with the Mk.V, the Mk.VI, designed in 1935, received a roomier turret, extended at the rear, and able to house a No.7 wireless radio set, which gave new tactical perspectives. The weight, due to the turret, rose to 4900 kg (10802 lbs), which in return required for a better engine. This was a 88 hp Meadows, air-cooled six-cylinder gasoline engine mounted on the right side of the hull, served by a new transmission (5 forward, 1 reverse, Wilson pre-selector gearbox), with a redesigned engine clutch, which will prove troublesome. As in previous models, the drive sprockets were at the front. The overall speed was even better than previous models, a precious asset in future desert warfare engagements. The old Horstmann coil-spring suspension system was kept unchanged, as it was found reliable and easy to maintain, although the pitch was quite violent during rough drives, rendering any aiming of the gun useless. However, the engineers managed to move the center of gravity forward, allowing a smoother ride.

The crew of three was somehow lodged in the cramped interior, the driver sitting on the front left while the commander (also radio operator) and gunner stood on a platform that revolved with the turret. Above it towered a smoothly shaped cupola. The main armament was kept unchanged. The heavy cal.50 (12.7 mm) Vickers had some armour piercing capabilities against armoured cars and other light tanks, mostly protected by up to 16 mm (0.63 in) of armour at the time. The Mk.VI\'s protection was unchanged, still capable of stopping small shrapnel fragments, light machine-gun, rifle and small arms fire. When the first prototype passed all trials in 1936, the Imperial General Staff considered this model superior to any other in service worldwide.

Soon after production began, it appeared that the initial serie had some flaws to fix. The return roller, initially over the top of the leading bogie, as in the Mark V was displaced to the back and attached to the hull sides instead, while the cupola was a new hexagonal model, and the turret octagonal. Ground pressure was lowered from 7.54 psi to 6.9 psi, and will decrease to 0.53 (kg/cm2) with the Mk.VIc model. The armament was unchanged, the main Vickers heavy machine-gun being supplied with 400 rounds, and the secondary machine-gun by 2500. The engine was now the improved Meadows ESTB.

This model was nearly identical to the former, but with some production simplifications in design, like the one-piece armoured louver over the radiator (instead of two-piece), and the return back to the circular commander cupola model, but with a plainer shape. The turret was fitted with a mounting for a Bren AA gun. The radio set was upgraded to the N.9, and the weight rose to 5 tons. At the end of production in 1939, a new, more compact BESA heavy machine gun (15 mm/0.59 in) was installed, and the coaxial one was upgraded to the new Besa 7.92 mm (0.31 in).

Armour thickness was also increased to 15 mm (0.59 in), and 16 mm (0.63 in) on the hull front. The Meadows ESTB/A or ESTB/B engine developed 88 bhp at 2800rpm, which gave a 16.9 hp/ton power-to-weight ratio, and a 200 km range (125 mi). The steering was done through clutches and annular spur reduction on the final drive. This was the overall most produced version. A sub-variant, called the "India pattern" (as most were sent to serve with the British Indian Army) had a single periscope mounted in the turret hatch for the commander instead of the usual cupola.

This wartime variant was also the last production of the entire series, and the most obvious change was the removal of the commander cupola, replaced by two domed hatches with a commander periscope. It also had wider bogie wheels and tracks and three carburetors for the engine, slightly improving its performances. The cover now had one inlet louver. Top speed was still 35 mph (56 km/h) and 25 mph (40 km/h) cross-country. The standard armament were two Besa machine-guns, one heavy and one light coaxial. In many models, a bullet deflector plate was also added on the driver's vision block.

This Besa heavy machine gun, produced at Birmingham Small Arms Limited (BSA), was essentially a scaled-up version of the common 7.92 mm (0.31 in) model, originating in a Czech design (ZB60). Its long barrel gave an excellent muzzle velocity. It could be fired on repetition (single shot) at a rate of 450 rpm, and employed an unusual method of cocking. It was not overall successful, nor did it have the punch of a 20 mm (0.79 in) caliber and, subsequently, production was limited. It was declared obsolete in 1944.

This model was first intended for reconnaissance and colonial warfare, and many were sent abroad, in India, Africa, and Palestine. The cheap Mk.VI was by far one of the most numerous tanks in the British Army when the war started, with approximately 1000 in service, compared to only 79 Cruisers I/II and 67 Infantry Tank Mk.Is. It was still largely available during the campaign of France. For the 1st armoured Division, 108 of its 321 tanks were Mark VIs. Total of these amounted 550 Mk.VIA and 200 Mk.VIB inside the BEF. Each divisional cavalry regiment was equipped with 28 Mk.VIs.

Wartime operations proved disastrous against equally fast and much better armed tanks like the Panzer II and Panzer 38(t) and, of around 400, only 6 made it out of France. This left mainland territory devoid of any sort of armour when the battle of Britain began. However, they showed better qualities and were found up to the task in North Africa, when the counter-offensive began against the failed Italian invasion (Operation Compass), where 200 Mk.VIs (chiefly with the 3rd Hussars and the 7th Armoured division) formed the backbone of the British armour, together with 75 Cruisers and 45 Matildas. Despite their feeble protection and machine-gun armament, they performed well against lightly armoured Italian vehicles and tankettes, being particularly suitable for fast outflanking maneuvers against the retreating Italians, capturing many prisoners.

The British lost many tanks, but the 2nd RTR was probably the most successful in these kind of operations, retaining most of its forces until February 1941. Mark.VI tanks in active service gradually degraded with the arrival of the Afrika Korps. They soldiered on until early 1942, many being sent to Greece, where they formed the bulk of the 4th Hussars and other units, and again in Crete (3rd The King's Own Hussars), and Malta.

Others served in Iran, with the Anglo-Soviet Invasion of August-September 1941, or were part of the landing force which fought in Syria against Vichy France, a handful of Mk.VIs sent in 1939 and manned by Australian crews. The South Africans and the Canadians also received some light tanks, and the former successfully operated these in Abyssinia throughout 1941. During the siege of Tobruk, the 1st Royal Tank Regiment had only 16 of these, but managed to move them on a daily basis, giving the Germans the impression of a much more impressive tank force. By mid-1942 and prior to the first battle of El Alamein, surviving Mark VIs still in service had been withdrawn and were used as mobile observation posts and local AA defense versions. The M3 Stuart had replaced them and were now largely available.

This model had a new redesigned turret, housing a quad-7.92 mm (0.31 in) Besa or a twin 15 mm (0.59 in) Besa heavy machine-gun AA mount. Because of this new turret, the traverse was now done by hand, which severely limited its speed and the effectiveness of the entire solution. The crew was only two. Production of this model is unknown and ceased by 1941.

An improved version of the first, now with fully powered traverse, wider and more accessible turret, and better quality sights. Another version of a 2-pdr 40 mm (1.58 in) armed tank with an open top turret remained a paper project.

About the Vickers Light Tank Mark VI on Wikipedia
The Mk.VI and VIa, b, c and variants on WWIIVehicles 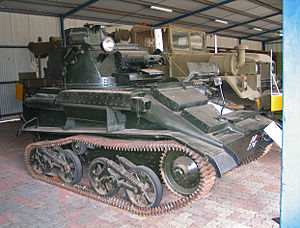 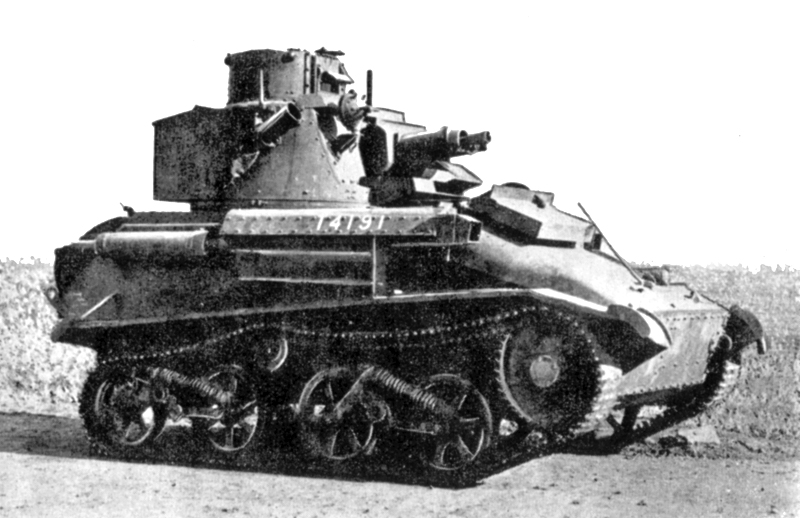