One of the few Austro-Hungarian armored cars

The Austro-Hungarian army failed to see the potential of armored car prior to the War. After some demonstrations, they decided against the use of armored cars, thinking them incompatible with current cavalry tactics and any military doctrine. The Empire, especially Austria, had limited industrial capabilities, except for a few renowned manufacturers. The Army started to show interest in this type of vehicle after the outbreak of war.
This was mostly due to the enthusiasm shown by the Russians and Italians, the then opponents of the Austro-Hungarians. The matter progressed so slowly that a young officer, Hauptmann Junovicz, decided to take the matter in his own hands. He devised an improvised vehicle, hand-built, on an existing chassis.
The chosen base was the Fiat 40 PS truck, a sturdy vehicle produced locally under licence. This vehicle was known as the “Junovicz armored car”. Except for the crude, improvised Junovicz, the only other armored car accepted into service was the small, refined, carefully handcrafted Romfell.

Design of the Junovicz armored car

The Junovicz looks relatively clumsy and unsophisticated at first glance. It was essentially a standard truck chassis with a slab-sided, boxy armored hull. This was made of a framework which held in place bolted armor plating, 7 mm (0.27 in) thick at the front and 5 mm (0.19 in) on the sides.
The overall weight was estimated to be more than 4 tons. Each vehicle was armed with two to three Schwarzlose Model 1912 7.62 mm machine guns. One was placed at the front of the vehicle, while the other(s) could be swapped between any of the four gun ports on the sides. The crew probably consisted of 5 or 6 men, depending on the armament carried. Its ordnance designation seems to have been Panzer Auto 1: P.A.1.

Three n variants of the Junovicz armored car are known:
– The first three Junovicz were constructed on Fiat 40 PS truck chassis, delivered in 1915.
– A fourth vehicle was built on a Büssing 36 PS chassis in 1917.
– A fifth was built on a Saurer 34 PS chassis also in 1917.
Operational records are unknown. There are few photos of the Junovicz, showing them painted in an uniform (presumably) standard light olive livery. It is probable that the 1917 versions were painted in a dull grey pattern, a color more available at that time.
The photos shows no markings but a simple registration above the radiator. An account from 1918 tells us that a platoon of armored cars, the K.u.K. Panzerautozug No.1, was engaged on the Italian front. It was equipped with two Junovicz P.A.1s, one Romfell P.A.2, one captured Lancia Ansaldo IZ, and one ex-Russian Austin Armored Car. These were kept in reserve in the vicinity of Udine, to be used later in the supposed future breakthrough at the Piave. 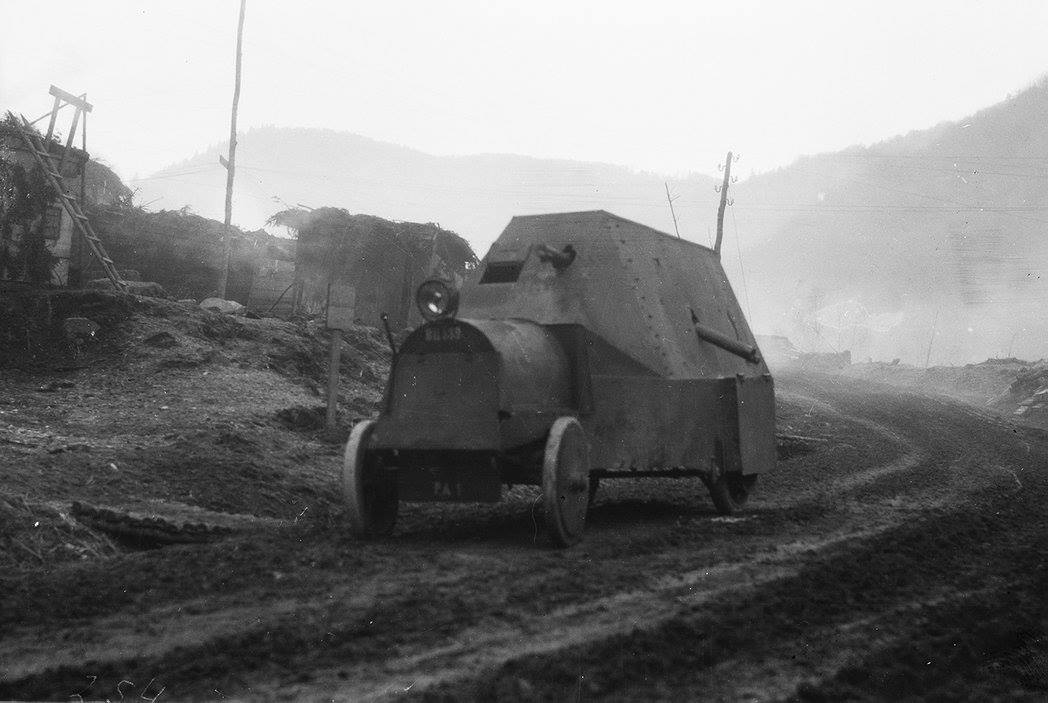 Later version of the Junovicz, built on a Büssing or Saurer chassis. Source

In the first paragraph Austria is misspelled as “aurostria”, otherwise a well thought out and informative article. I’m always on the lookout for any information in regards to K.u.K. Panzerautozug No.1, as the unit is rather obscure, keep up the great work!

Hey Gabe,
It has been fixed. Thank you for your comment!

Found an other photo:
https://i.imgur.com/TozmLRh.png