The very roots of the Neubaufahrzeug (literally: “New Construction Vehicle”) are connected to the arrival of Hitler as the new head of state, and the desire to have, as quickly as possible, a suitable heavy tank, both for the army needs and for propaganda purposes. It had to be a symbol of the renewal of the German Army and was conceived in quite a hurry. Its inspirations can be traced back to the British multi-turreted prototype Vickers A1E1 Independent, which also inspired the the Soviet T-28 and T-35. The former was under intense scrutiny when the Reichswehr decided, in 1926, to give a contract to Rheinmetall-Borsig, MAN, Daimler-Benz and Krupp for the Reichswehr Großtraktor. 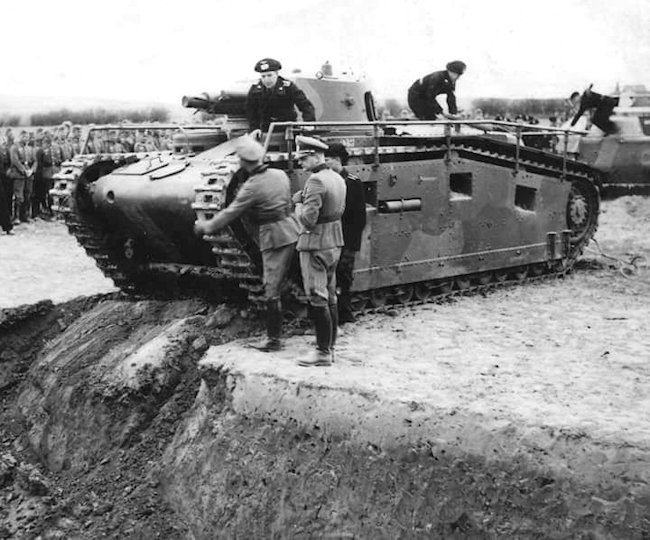 Reichswehr Großtraktor built by Krupp undergoing trials (Bundesarchiv)
This was a disguise designation, used to cover up tank development, which was forbidden under the Versailles treaty. Tests were performed at Panzertruppenschule KAMA, the gunnery and testing grounds at Kazan, in the USSR, and Oberstleutenant Malbrandt supervised the tests. This high security proving ground was part of the joint Red Army and Reichswehr training and testing cooperation, born from the treaty of Rapallo signed in 1922. Two prototypes of Daimler Benz’s Grosstraktor I were tested in 1929, showing transmission problems. Two others, Rheinmetall-Borsig’s Großtraktor II, were also tested in 1929 and modified for new tests in 1931. After a new campaign of trials, the four prototypes were given to the 1st Panzer Division for the 1935 maneuvers. Since they had been plagued by many problems, they ended as monuments outside training camps or practice targets for gunners but paved the way for the upcoming Neubaufahrzeug. 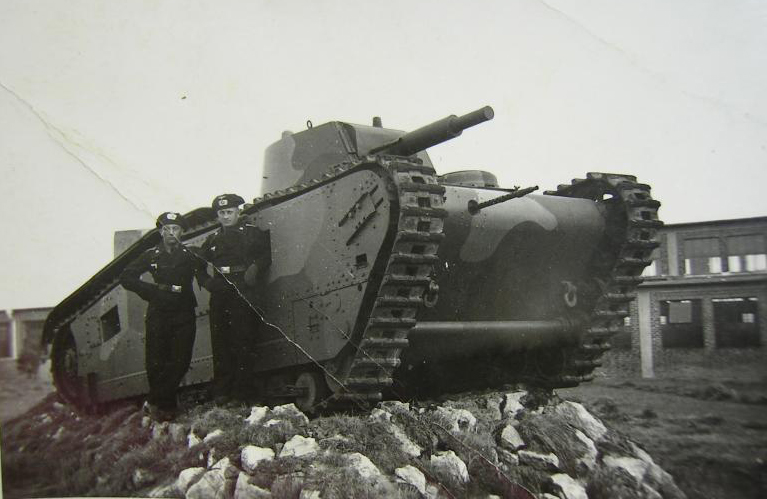 A Großtraktor turned into a monument with 2 german trainees. (Source N/A)

Only two prototypes were built at first, one by Krupp – Model A, and the other by Rheinmetall-Borsig – Model B, and they differed only by their gun arrangement. The 75 mm (2.95 in) KwK L/24 main gun and secondary 37 mm (1.46 in) KwK L/45 was mounted coaxially in a single mantlet on the Krupp prototype and in vertical tandem on the Rheinmetall one. The two secondary turrets, equipped with 7.92 mm machine-guns, were borrowed from the Panzer I, then in development, but modified in order to fit. The Rheinmetall version was named Pz.Kpfw. Nb.Fz.V, and the Krupp vehicles were named Pz.Kpfw. Nb.Fz. VI. Once the two designs were ready, the first two prototypes were built in 1933-34 (N°1 and 2) and three others (N°3, 4 and 5) in 1934-36.

The first two tanks were built in mild steel, with partially welded hulls. Final assembly (fittings and turrets) was performed at Krupp. The first one had the original Rheinmetall turret with the tandem guns (the 37 mm/1.46 in Tankkanone L/45 was installed over the 75 mm/2.95 in KwK L/24) and a horse-shoe FuG turret antenna. All the other four were given the Krupp turret (coaxial guns). There was also a project of conversion to a Nebel Panzer, armed with 105 mm (4.13 in) gun firing smoke rounds, which never materialized. The two secondary turrets were mounted in a lozenge configuration, one on the front left and the other one on the right rear. The driver compartment was next to the front turret, with the main fighting compartment behind. There were two rear hatches for the original BMW engine (Type A), replaced for the four others by a more powerful 300 hp gasoline Maybach HL 108 TR fed with 457 liters of fuel.
Transmission was done by a crash gearbox, 5 speed forward, no reverse. The suspension system consisted of modified coil (leaf) springs coupled with Christie type torsion arms, attached to a set of five bogies with paired road wheels. The front single road wheel was suspended independently, like on the British A1E1 and Russian T-28. They were protected by side skirts with mud chutes in échelon (under each return roller), with two access doors to the suspension. The turret also had two large, one piece access side hatches. The commander cupola was at the turret rear end. Provision for ammunition was 80 rounds for the main gun, 50 for the coaxial 37 mm (1.46 in), and around 6000 for the two MG 34 machine-guns. Armor was not particularly thicker than other Panzers of the time, just enough to provide minimal protection against infantry weapons, light AT guns and shrapnel.

Soon after delivery, the three late prototypes were extensively tested at the proving grounds at Putloss, while the first two took part in army maneuvers. However, by the end of 1936, it was decided to cancel all further development of the series, priority being given to the Panzer IV. The main tactic devised, notably by Heinz Guderian, favored mobility over firepower, which was as the very core of the Blitzkrieg. This condemned these vehicles, which soon became the “white elephants” of the Wehrmacht, displayed in all propaganda displays, shows and newsreels, starting with the International Automobile Exposition in Berlin, 1939. Another of these mediatic coups was that a platoon consisting of all three late prototypes, named Panzerzug Horstmann, after its commander, Lieutnant Hans Hortsmann, was deployed in Norway, notably to give the impression of a larger production. Similar disinformation operations had been also successfully performed with the Heinkel 100 fighter, despite the appearance in Spain of the Bf 109. The three were landed at Oslo harbor on April, 19, 1940 and took part in local operations. Although handicapped by their speed, they were still an impressive sight, and by far the most heavily armed German tanks fielded there. This unit was later posted at Akershus Fortress (Oslo) in Norway, in 1941 and their fate is unclear, although they were eventually captured in Norway by 1945 and scrapped afterwards. The two others seem to have taken part in operations in Ukraine and Romania.

Rheinmetall Grosstraktor prototypes N°45 and 46, the last of the six prototypes tested at Kazan.

Neubaufahrzeug number 1 (Type A) was the only fitted with the original Rheinmetall-Borsig turret, showing an early large FuG horse-shoe radio antenna. The large size of the tank was well suited for a platoon commander vehicle. The three-tone camouflage was usual by 1937-38, seen here used in maneuvers at Panzertruppenschule Putlos. Their fate during the war is unsure. Reports seem to point to the fact that the first two vehicles served in the Balkans in March-April 1941, and were shipped to Army Group South, the Romanian sector. In the summer of the same year photos of one of these was taken at Dubno (28 of June, western Ukraine, during operation Barbarossa), with the usual dunkelgrau livery and a triple X as unit marking on the turret.

Nb.Fz.VI, or Type B, with the Krupp turret and operational markings, part of the Hortsman platoon, also comprising two other “B” tanks. Number 8, Vaerwaagen, southern Norway, late April 1940. They were later stationed near the Oslo fortress during most of the war. 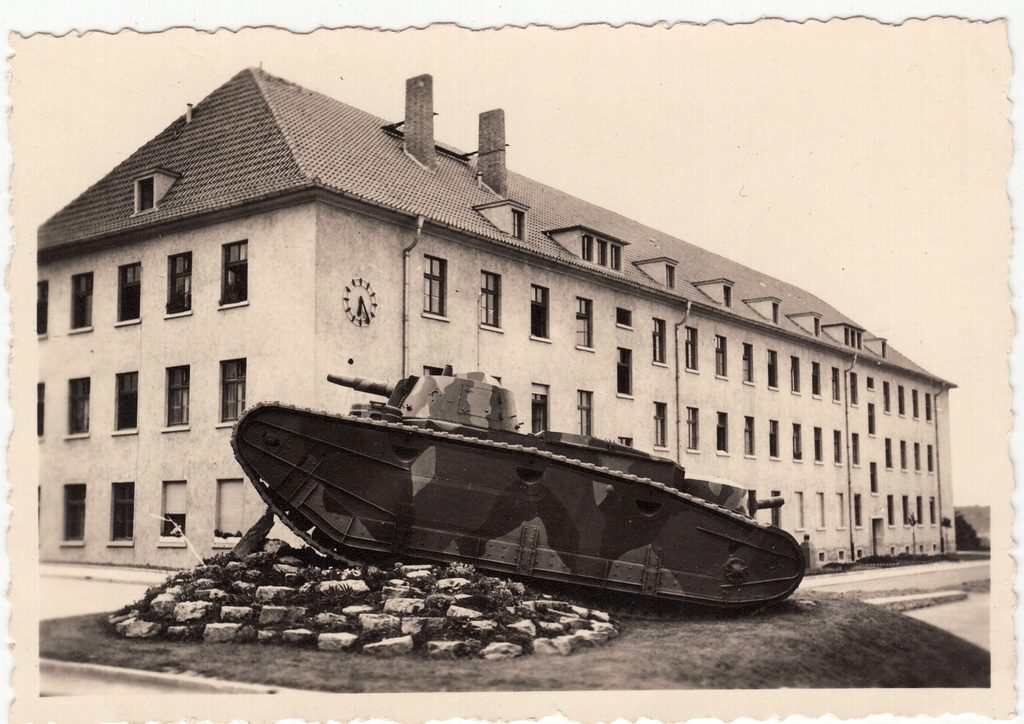 Hmmm… Very interesting! Definitely shows the heavy influence of Russian vehicles on German designs: just look how close to the T-28 it is! Another wonderful article on a unique design, keep up the good work.

Thanks for your thoughts!
– TE Moderator

Actually, it was the other way around. The Soviets developed their versions of the two tanks mentioned, after the Germans designed this thing. Their inspiration came partly from the Neubaufahrzeug designs, shared in their joint research, and from French and British existing designs. The German design for the Neubaufahrzeug was also influenced by those dame factors. As for their disposition, 1 was lost in Norway, the others were returned to Germany and used for training. 1 of the 5 built was made in soft steel so it was permanently part of the training group. Two were lost fighting the Soviets in the approach to Germany and the remaining two, including the soft steel version, were actually part of the defense of Berlin. None of them fared well.

As an addendum: There is a secondary story that alleges that documents captured by a British officer at the end of the war claim the vehicles were all ordered scrapped in 1942 and that the order was carried out. This contradicts statements from German officers at the training facilities that brought almost all remaining available vehicles to aid in the final defense of Berlin. Those officers gave the accounting of the disposition of the Neubaufahrzeug units as stated above. One might have to surmise that the only way anyone will ever know exactly what happened to them is to travel back to 1945 once someone perfects a time machine!

I’d consider it closer to the Vickers Medium Mk. III. I would love if you also did an article on this. The reason I say this is due to the fact that it has that slight rhomboid shape reminiscent of World War I.

Hello, do you think that the Krupp turret can house a KwK 42 to replace the 75mm short barrel ?
Good article btw

to be honest, I would say it probably would Though it may end up sacrificing the the coaxial 37mm. The machine gun turrets might’ve been prone to removal if this mating were to happen, probably to help add more space for more ammunition for the KwK 75. and armour would have to be upgraded.. seeing how it would be long into the war that it would receive the gun. And upgrade the engine…
Hello from Canada, friends and TE crew!
– General Soldiernator

Hello,
Fantastic article, thanks for the hard work! Do you think it would be possible to get an artwork for the Großtraktor too?
Chris

Additional information on the 105mm gun?

Glad to see you got the translation of “platoon leaders VEHICLE” correct here. But why would a German prototype be outfitted with .303/7.7mm MGs? That was a British or Japanese caliber. Germans used 7.92mm (aka “8mm”) from before WWI until after WWII.

Hello, thank you for a great website! Just a comment to the picture text of one of the photos of the German heavy tank Neufahrzugbau; the picture from Olso harbour can not be from 19th March 1940, as the German invasion started on 9th April 1940.

Hello Henning,
Thank you for bringing this to our attention. Unfortunately, this article is very old and its quality is no longer up to our standards, so we are currently looking to rewrite it.
All the best

The Grosstraktor is now Kross with you 😀
Changed it, thank you!

Just want to point off that the size is a bit off. If you look closely, you would notice that the width cant be that much less compared to the height

Good point. Spielberger mentions in ‘Fahrzeuge der Reichswehr: panzerkampfwagen 1920-1935’ that width and height are exactly the same at 2,9 meters (roughly 9,5 ft). The track gauge of the Neubaufahrzeug is 2,39 m.

Norman Baillie-Stewart sold the plans and specifications of the A1E1 to the Germans. This is how the Krupp and Rheinmetall were able to build similar looking tanks (Großtraktors).

On April 23rd, 1940, a German column consisting of a light Panzer II tank, an Sd.Kfz. 231 armoured car, and a Neubaufahrzeug approached the city of Åndalsnes, which was protected by two companies from the King’s Own Yorkshire Light Infantry Regiment. As soon as the head of the column entered the Lagen river valley, one of the British operated 25 mm Hotchkiss Mark I anti-tank guns was able to disable the Neubaufahrzeug by firing at its suspension (and then knocked out the Panzer II). The small caliber anti-tank gun managed to disable the heaviest tank Germany had to offer in 1940.

Well at least it wasn’t knocked out by a Boys….