Derived from the prewar Panhard 201

The specifications for this model came from pre-war requirements, in 1938. The army already searched for a replacement for the Panhard 178. The latter was already in production and probably one the best-armored cars fielded by the French army during the war. However, as a 4×4 was still lacking off-road capabilities on soft ground, so a new solution was needed. This was materialized when Panhard & Levassor (Paris) revealed the model 201. This low-profile vehicle (only 1,80 high at the turret top) was well suited to recce missions in camouflaged positions and featured a unique combination of four outer roadwheels and four inner metal wheels which could be lowered to convert the vehicle to an efficient 8×8 on the softest grounds. The 4×4 configuration was kept for road (top speed 80 km/h). Armament was completed by a small 25 mm or a 37 mm SA37 firing AP shells. It was ordered as the AMP40 to 600 units on may, first, 1940, but none was ready in time. Only the prototype which was thoroughly tested was eventually sent to North Africa to avoid capture, and then it was destroyed.

Design of the Panhard EBR

The EBR for “Engin Blindé de Reconnaissance” (reconnaissance armored craft) was still favored in the immediate postwar Army requirements, and Panhard was given carte blanche to resume the development of the 201, which it did, on the basis of a larger vehicle, the Panhard 212. As the 201, this 212 retained most of its features like the general hull shape, convertible 4×4, 8×8 nature, but added to that a symmetrical, low-profile hull with concentrated protection (identical rear and front) and two drivers, and most famously, an oscillating turret to replace the former conventional turret of the 201, and a four-man crew. Another particularity was the engine placed under the turret, due to its extreme compacity.
Since caliber and protection had progressed significantly during the war, a much bigger caliber was needed, and the only way to fit such weaponry on a low-profile, small chassis vehicle, was to lowering and lightening the turret too. For these reasons, the oscillating turret -at first a theoretical arrangement- was chosen. This particular type of turret comprised a traversable base, coupled with a fully moving upper turret part, comprising not only the gun, but also the commander cupola, and elevating in a single entity with its crew inside the hull. The big advantage of such unconventional system was to allow much bigger guns to be mounted in a very compact, weight-efficient arrangement. The French Army was enamored with this concept which also found also an application on the successful AMX-13 light tank. This was a two-man crew, with the loader and commander on each side of the gun. The loader/gunner had a coaxial 7.5 mm MAC Reibel machine-gun at his disposal, as well as the commander, in a removable dual-purpose ring mount fitted around the cupola. Both drivers were given each a single hull machine-gun, which raised the total to four, although the figure of three was most common. The SA 49 main gun was derived from the famous German Panther’s main gun, with manual loading. In complement, two banks of two smoke dischargers activated electrically was fitted on the turret, which also received extra fixations and a rear basket for extra storage. When the F2 90 mm was introduced, HEAT, HE, smoke projectiles and even canister shots were part of the ammo.
The other main feature was the convertible configuration with four outer roadwheels, and four inner metal ones, which could be lowered. All had individual torsion bar suspensions, and the outer pneumatic roadwheels were given Michelin tires of “run-flat” type, thanks to their Veil-Picard tubes featuring nitrogen-filled cells. These were massive with 61 cm of diameter (24 in). On these, the EBR could reach speeds up to 100 km/h on road as required (62 mph), in both directions without turning. The inner wheels were smaller and featured aluminum rims with steel grousers, separated by rubber blocks. When deployed, the ground pressure was lowered to just 0.7 kg (1.5 lb)/cm2 or 0.16 sq in. Average speed was much slower on uneven grounds, but a true-all terrain capability was achieved. The last singular feature was the very “flat” (22 cm high) Panhard’s twelve-cylinder HS6000S engine, with dual carburetors (6.6:1 compression) which could run on low-octane petrol. It was mounted on the fighting compartment floor. It could be accessed easily from inside, but at the same time maintenance imposed to remove entirely the turret. But at the same time, was quite noisy, making this vehicle hardly stealthy despite its low profile.

The first Panhard 212 was tested and accepted in service by 1950, and production began in 1950 a the Panhard EBR. The first version (EBR-75) was armed with the 75 mm SA 49 (muzzle velocity of 600 m/s). The second version of 1954 had a lengthened barrel SA 50, was rechambered (more powerful rounds) and had an almost doubled muzzle velocity (to 1000 m/s), and a barillet. Eventually, the third and last version of 1963 (EBR-90) was equipped with the new 90 mm F2 but with a lower, 750 m/sec only muzzle velocity, and was served by an autoloader. In standard, there were three 7.5 mm MAC 34 “REIBEL” with shipper magazines of 149 cartridges each. However, these models were already obsolescent. In total, 1200 were produced until the line was closed without further orders in 1960, although conversions were performed until 1969.

As the main owner of these vehicles, France used them in accordance to the tactics of the day, laying entirely on the Light Mechanized Divisions (DLM). These had the duty to cover and range over a large battlefield area, well in advance from the main concentrated armored division. Each vehicle could perform not only reconnaissance but also flanks covering and “offensive protection” which includes repelling enemy incursions or advanced elements. That meant a good anti-tank weaponry was needed for any kind of encounters. France used an extensive series of these vehicles until 1980 when they were gradually decommissioned. Those which were already not converted to the new 90 mm F2 standard had been taken out of service and placed in reserve from 1964 onwards. The more conventional AMX 10RC replaced the EBR, starting in 1981. The French EBRs mostly operated in anger during the Algerian war (1954-62), and in various hot spots in Africa until the late seventies. These were also associated with the légion étrangère in these theaters of operation. It was seen operating in flat, barren environments of the Sahara Desert to the tropical jungles of central western Africa, and of course in Mainland Europe. Perhaps a hundred survived to this day, including some in running condition operated by collectors.

Portugal was the main customer of this vehicle with 100 operated, EBR-75 (with the 75 mm FL-10 turret). They were used extensively in Angola, (during the Colonial War of the seventies) by the 1st Cavalry Group, called “the Dragões de Angola”. The Portuguese army also used an APC variant, apparently only built for Portugal, named Panhard EBR-VTT. This was basically a modified hull similar to the one fitted on the AMX-13 VTT APC fit on the EBR chassis. 28 of these were produced in 1956. These were armed with a 12,7 mm heavy machine-gun in a commanders’ ring, three 7.5 Mgs and could carry a platoon of twelve fully equipped soldiers. In Portuguese nomenclature: Blindado Transp. Pessoal Panhard ETT 13 ton. 8X8 m/1959.

Panhard 201 in 1940. This was the true forerunner of the EBR, testing one of the first oscillating turret ever built.

EBR-11 from the Légion-Etrangère in the Sahara desert, 1961.

Portuguese EBR-75 during the war in Angola, the Dragoes de Angola. 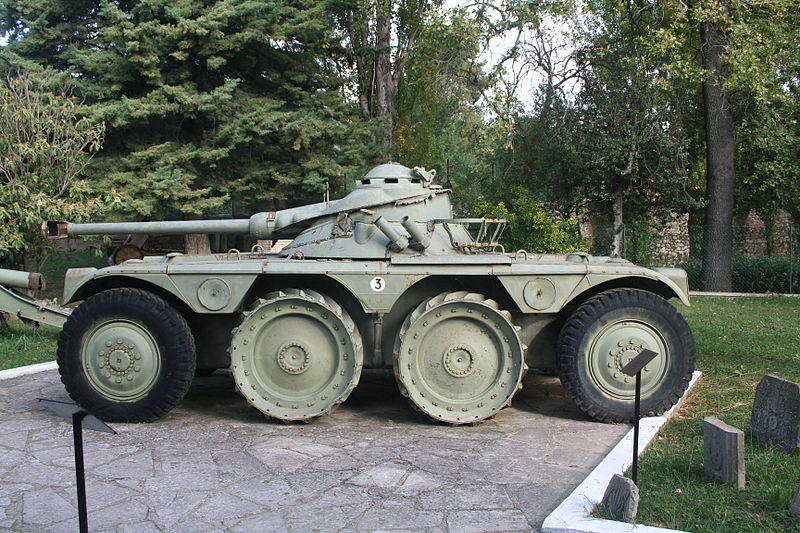 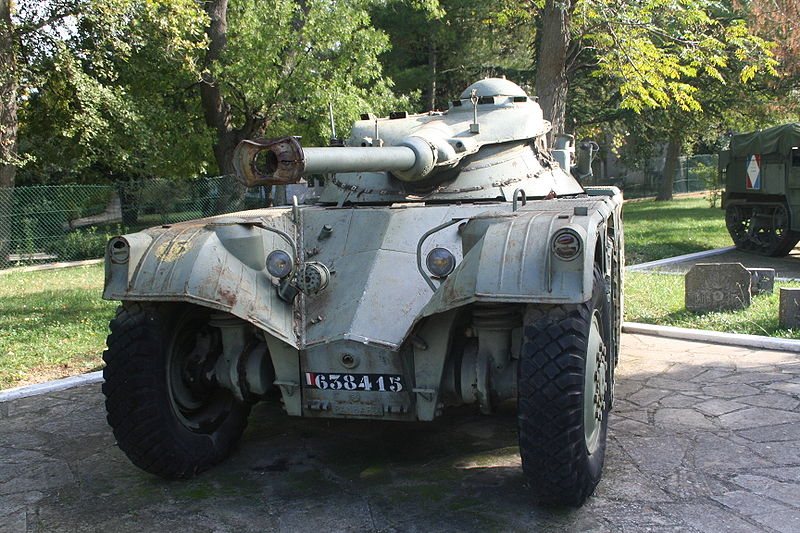 Panhard EBR 75, another view of the same 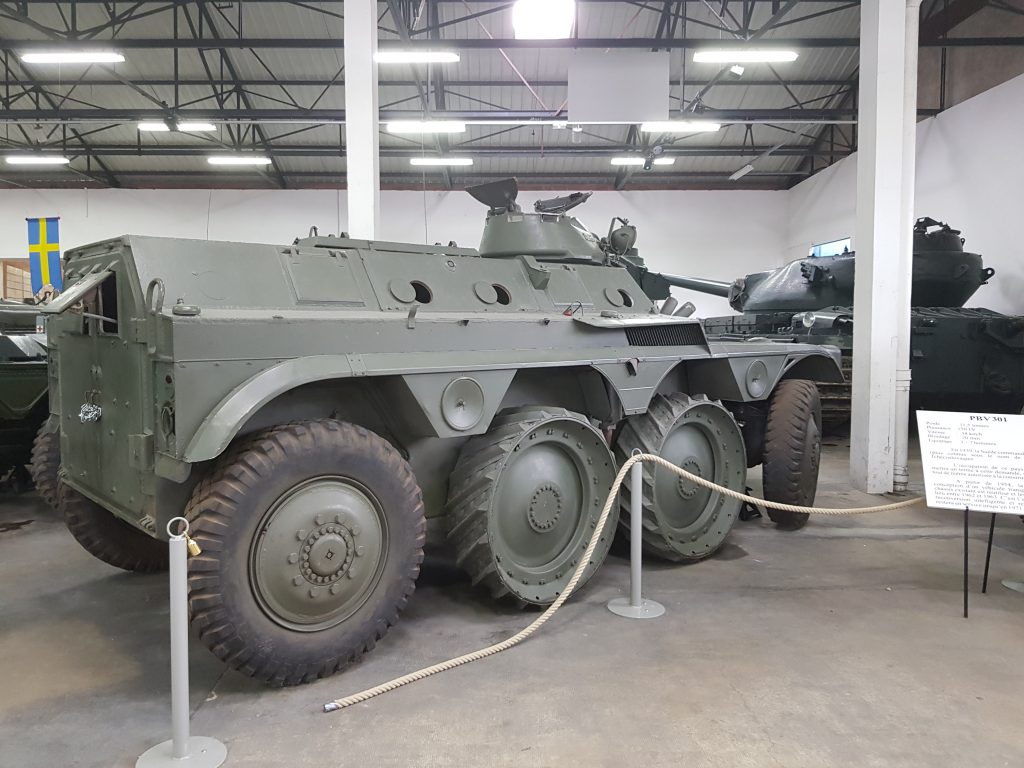 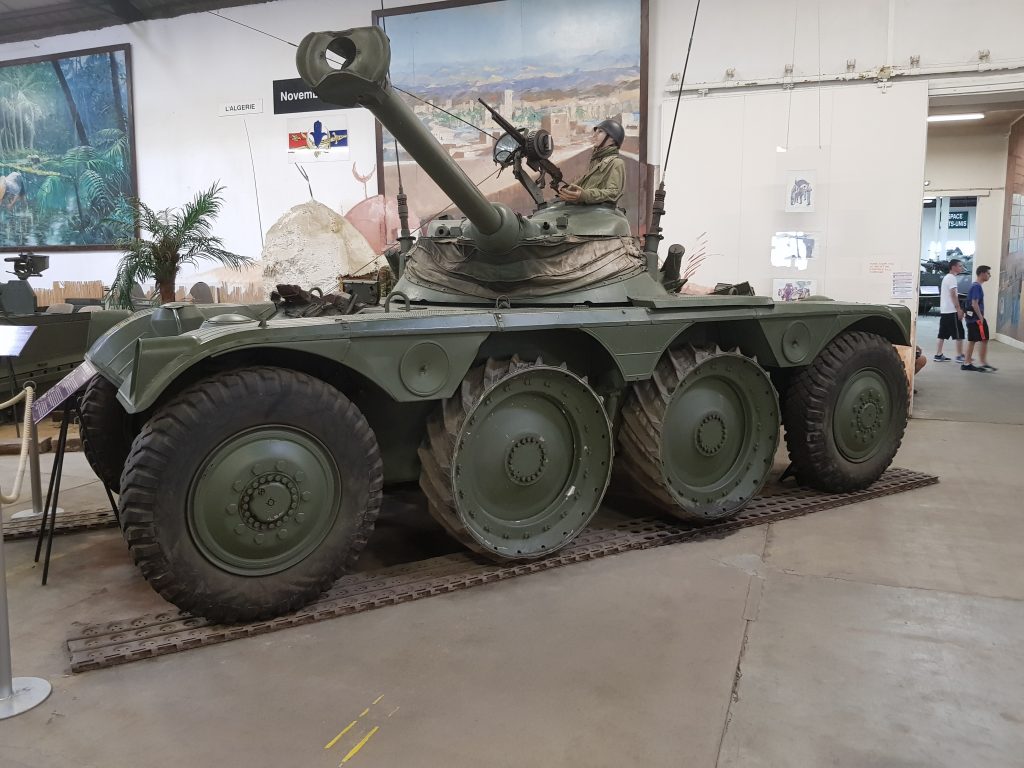 Author’s photo of the EBR at the Saumur Museum