Based on the Panzer II

The Wespe was officially called "10.5 cm Leichte Feldhaubitze 18 auf Fahrgestell Panzerkampfwagen II" by the Waffenamt, but known by every foot soldier as the "Wespe" ("Wasp"). This self-propelled artillery was the most famous and durable in service in the German Army throughout the war, but not the most produced. This title belonged to the bigger Hummel, fitted with a 150 mm (5.9 in) howitzer. It began as a paper project when it became clear, after the reports following the Battle of France, that the Panzer II was not suitable as a frontline tank anymore, lacking the armament and protection required to face the new generations of AFVs. 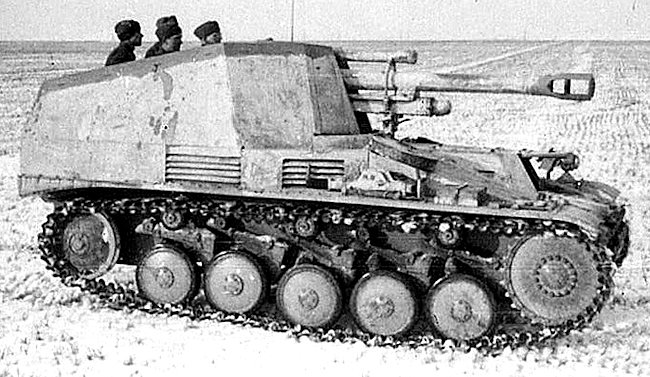 At the end of 1941, Alkett designed a conversion based on the Panzer II Ausf.D/E (Christie suspension), the Marder II (Sd.Kfz.132). By the beginning of 1942, the same conversion was applied to the Panzer II Ausf.A-C (Sd.Kfz.131). An idea to adapt a standard 105 mm (4.13 in) howitzer to the same chassis appeared, giving a perfect match for the mobility of the Panzerdivisions and providing the required indirect artillery support, complementary to the Stukas.

Design by Alkett, production by FAMO

Alkett's engineers became famous after designing and producing a large number of conversions of various tank platforms as SPGs of all kinds, alongside FAMO, MAN and others. They choose the Ausf.F chassis for conversion, which provided most of the mechanical parts. But, contrary to the Marder series, Alkett choose to put a counterweight for the massive recoil and the engine itself was relocated to the front, while the fighting compartment was shifted to the rear. The engine exhausts were placed under it. The frontal glacis was redesigned and well-sloped and the chassis was lengthened to the rear to make room for the common 10.5 cm (4.13 in) leFH 18 howitzer built by Rheinmetall-Borsig. 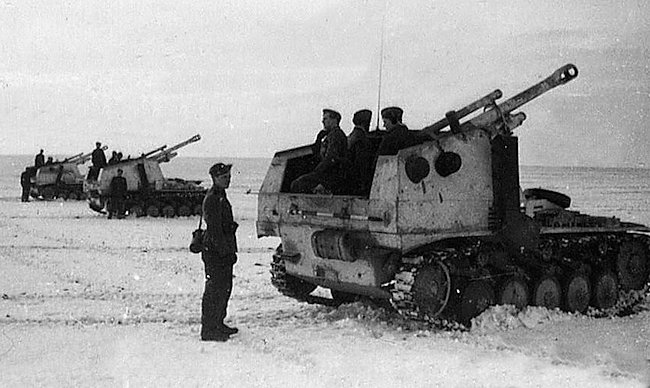 A Wespe German artillery Batterien (battery) normally had six vehicles. An Abteilung (Battalion) was comprised of three batteries: two with Wespes and the third with Hummels (Photo - US NARA Kriegsberichter Archive)

The superstructure was also model-specific, well sloped, but only 10 mm (0.39 in) thick and with an open top. The suspension was reinforced, in order to cope with the stress of the recoil, and the space between the last roadwheel and the idler was widened. The driver compartment was at the front and fully enclosed. The ZFA SSG 46 Aphon gearbox (6 forward and 1 reverse) served the same Maybaych six-inline engine fed by two 140 liters fuel tanks. The weight rose to 11 tons, but the speed was maintained to a maximum of 40 km/h (24.85 mph). There was also a FuG Spr.f radio inside the hull.

After Alkett produced a prototype for tests in late 1942, FAMO's Ursus plant in Warsaw was charged with the design. On the 14th of July, 1942, the Panzer-Kommission approved the concept and Hitler confirmed an order for 1000 on the July 25. But the production only began in February 1943 and lasted until June 1944, when the main factory was captured by the Red Army. In total, 676 were delivered by Ursus - Fahrzeug und Motorenbau (FAMO) of Breslau (Wroclaw) and Vereinigte Maschinenwerke/Famo Warschau in Poland. 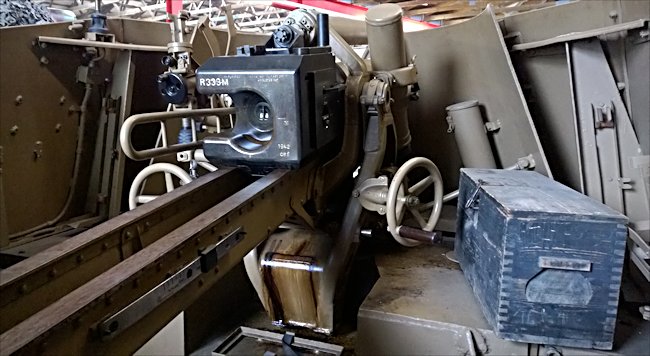 Since the Wespe was cramped and could only carry limited ammo, the Munitionschlepper auf Fahrgestell Panzerkampfwagen II, or more simply "Munitionschlepper auf Wespe", was designed as a weaponless variant, entirely filled with storage boxes containing 90 105 mm (4.13 in) shells, to complement the limited supply of regular Wespes (32 rounds). 159 were built in all, by the same manufacturer, and two were attached to each unit (Abteilung) of six Wespes. The modifications were modular and each could be converted in the field to a regular SPG at a moment's notice. 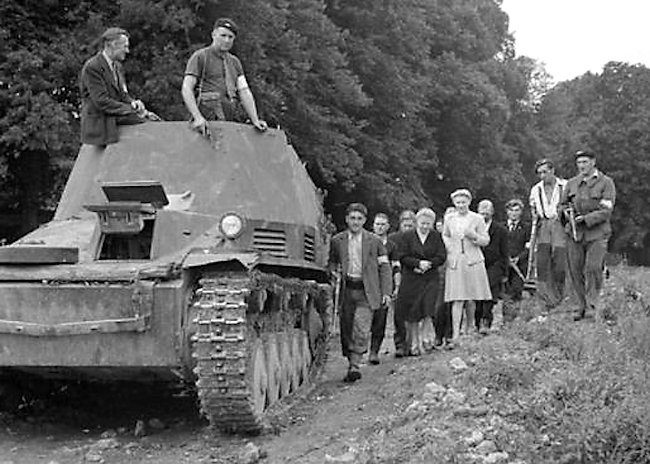 It must be noted that, before the Wespe, another SPG was based on the Panzer II chassis, the rare (only 12 built) 15 cm (5.9 in) sIG 33 auf Fahrgestell Panzerkampfwagen II (Sf) which fought in North Africa. The old, but still efficient, 150 mm (5.9 in) was much heavier and in order to cope with that the superstructure was lowered considerably, exposing the crew to small arms fire.

The biggest part of the Wespe production went on the Eastern Front and the first Panzerartillerie Abteilung equipped with this vehicle appeared in March 1943. They saw extensive service alongside the Hummel, first at Kursk, then with all three Eastern fronts groups. They were so successful that, after reading reports, Hitler ordered all other conversions based on the Panzer II chassis to be stopped and all work to go on the Wespe. By the summer of 1944, some Abteilungen were sent to Normandy as reinforcements. They fought in Italy as well, taking part in the pounding of Allied forces in the Anzio pocket and defending the Caesar and Gustav lines. No less than 36 Panzer divisions, including SS and special units, received Wespes, seeing active service on all fronts after 1943. The authorised establishment of the Panzer Artillery Regiment of the Heer Panzer Division that took part in the Battle of the Bulge, Ardennes Offensive in December 1944 had three Abteilungs (Battalions). The second and third battalion comprised of towed 10.5cm, 15cm and 17 cm Howitzers but the first battalion was equipped with artillery self-propelled guns.
1.Abteilung (1st Battalion)
Stabskompanie (HQ company)
1.Batterien (6x Wespe 10.5cm Artillery SPG)
2.Batterien (6x Wespe 10.5cm Artillery SPG)
3.Batterien (6x Hummel 15cm Artillery SPG)

By March 1945, 307 were still in service. The crews praised its reliability and mobility, but despised the lack of protection, both in thickness and height. The fighting compartment was also very cramped. The loaders working at the back end of the superstructure were the most exposed. 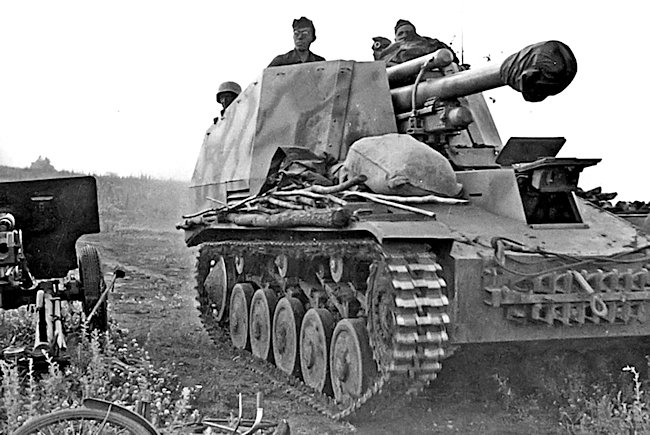 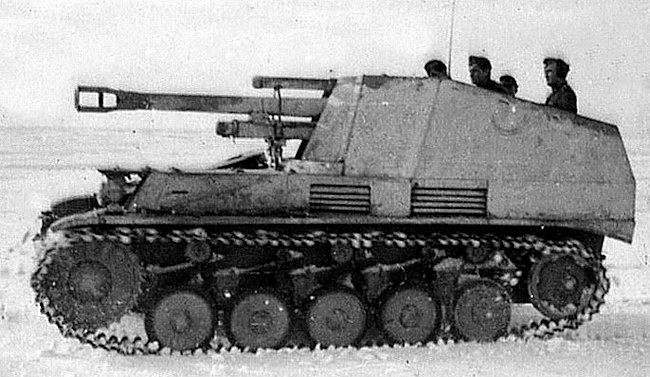 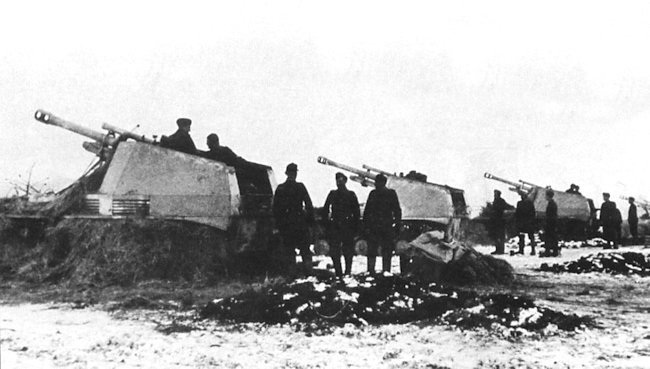 The problem of having a small combat compartment meant that three out of the five Wespe SPG crew members had to perform their duty outside the vehicle when the gun was fired. 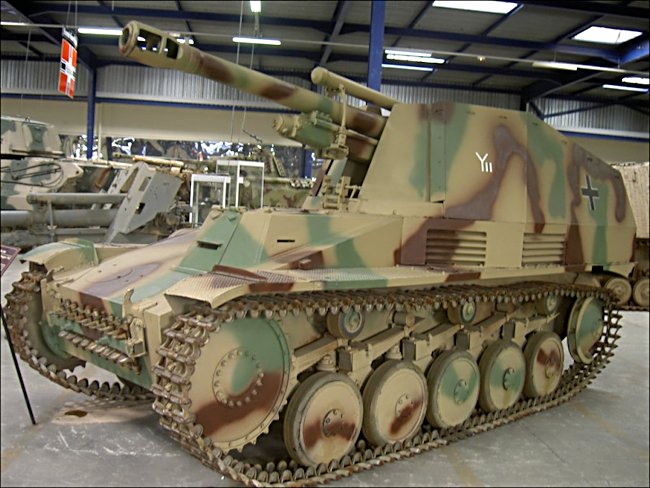 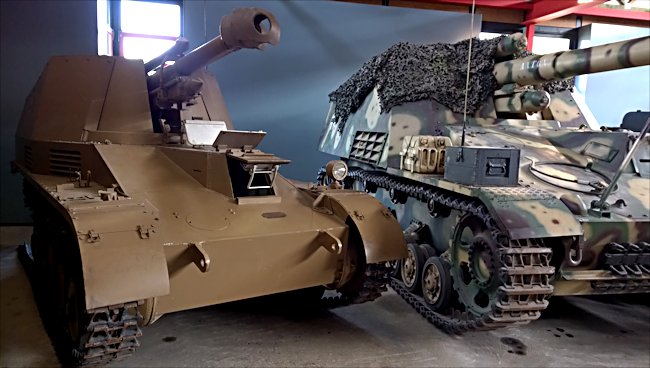 Wespe 10.5cm SPG on the left next to the larger Hummel 15cm SPG at the Deutsches Panzermuseum, The German Tank Museum in Munster, Germany 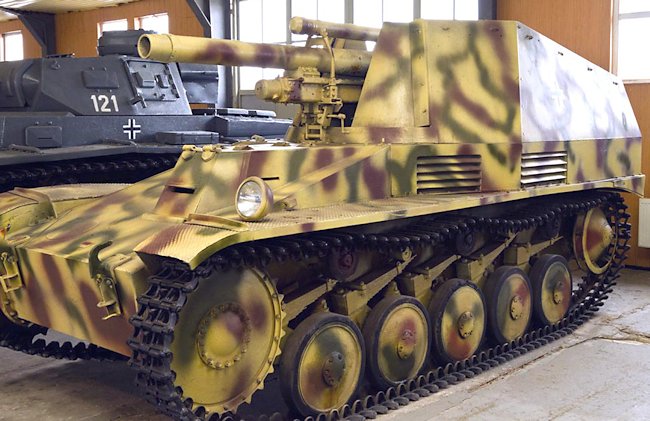