Formation of the East German Army

The Nationale Volksarmee (NVA) was formed on 1 March 1956. Before it, Germany of course had no army as per the armistic conditions and soviet occupation. Instead, a system was set in place, the "Kasernierte Volkspolizei" or literraly the "Barracked People's Police", which was a military police (or gendarmerie) under supervision, equipment, methods and training (even uniforms) of the Soviet Army. It was a unique case among Warsaw Pact militaries opposing NATO, since it was the only "police force" instead of a proper army.

The German Democratic Republic's National People's Army was created six months after the Bundeswehr) and the delay was also a reason of years of preparation seeing former Wehrmacht officers and communist veterans of the Spanish Civil War organizing and train at first paramilitary units (The People's Police), but the use of former German Generals, most of those captured at Stalingrad, antinazi or for one of them, Müller already a staunch communist, was not easy for Soviet authorities. The new government suggested to ressurrect the old tradtions of the German army and specific uniform, march and parade, yet its doctrine and structure showed still a strong influence of Soviet Armed Forces, and of course its equipment.

The army was gradually allowed to mount armoured divisions, all equipped with Soviet tanks, APCs and later IFVs as well as specialized vehicles. In time however, given the production quality in Germany, several vehicles were gradually built in germany, although faithful copies of Soviet models. Like the Polish and Czech-built materials, they had excellent reputation and quickly found clients in 1990.

In 1956, 27% of NVA's officer corps came from the former Wehrmacht and at the top, 61 out of 82 high command positions were also taken by ex-Wehrmacht officers and their military knowledge and combat experience proved invaluable in shaping the NVA as the most impressive force, as seen by NATO. This was only transitional as by the 1960s, most wartime veterans retired, more so than in the West, where the Bundeswehr counted in crushing majority Wehrmacht veterans, including lower ranks later promoted.

In case of war in the 1960s, none knew how these former Wehrmacht men would had done, facing each other through binocular and on the battlefield. Until 1960, the NVA relied on volunteer whereas West Germany re-introduced universal military service in 1956. Conscription was ordered in turn in 1962. In 1987, all three branches had 156,000 men under arms and 175,300 personnel total, and during the cold war, about 2.5 million men were in the military. 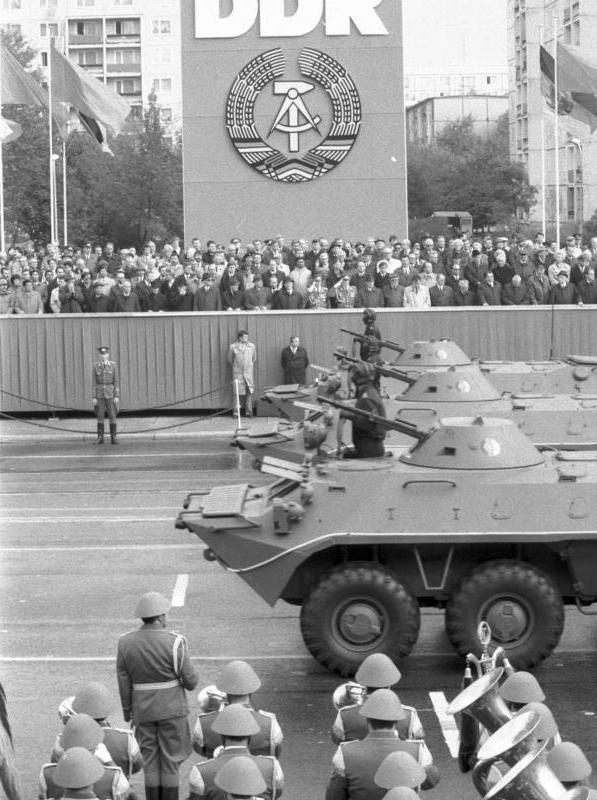 "Prussian" in surface, but strong ideology

NATO officers would later rate the NVA as the best military in the Warsaw Pact (for discipline, training, and officer leadership), but it went a long way. The NVA oly active deployment was a participation in the invasion of Czechoslovakia in 1968, but only through military advisors. This force was also responsible of the Berlin wall strict enforcement control, resulting in many deaths. The NVA was eventually dissolved on 2 October 1990 before German reunification. Both the facilities and equipment were handed over to the Bundeswehr, absorbed most of its personnel but get rid of officiers and resold or scrapped its equipments for the sake of standardization. However despite its "germanization", the NVA was under strict ideological supervision by Moskow, through notably the SED (local communist party) which appointed its members at the top.

The NVA was officially missioned to "protect peace and secure the achievements of socialism, by maintaining a convincing deterrent to imperialist aggression". Its flag-written motto was "For the Protection of the Workers and Farmers' Power". It was quite unique in its unlikely marriage of old prussian traditions and communist ideology. From a Leninist perspective, it was even a symbol of Soviet-East German solidarity, the model communist institution, strong in ideologiy, hierarchical and disciplined. The Friedrich Engels Military Academy formed all the cadree of the army, after Karl Marx's co-author. It became the highest award after General Gerhard von Scharnhorst's medal. 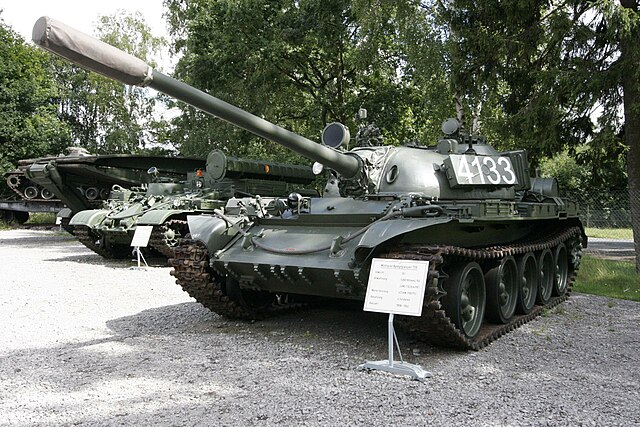 The NVA comprised four branches: The NVA was under supervision of the Ministry of National Defence, commanded by the National Defense Council of East Germany. Its headquarter was in Strausberg, some 30 kilometers (19 mi) east of East Berlin. The Landstreitkräfte (Ground Forces) (about 100,000 in 1980 comprised 11 divisions, including two armoured ones: The 7th Panzer Division in Dresden and 9th Panzer Division in Eggesin.

They were at first trained in defense, to parry a NATO offensive in the fulda gap notably and known ways, but from the 1980s, it was tactically train to integrate with the Soviet armoured divisions for offensive roles. Outside these, the German infantry was motorized integrated into the 1st, 4th, 6th, 8th, 10th, 11th, 17th, 19 and 20th Motor Rifle Division, based in Potsdam-Eiche, Erfurt, Königswartha, Schwerin, Ronneburg, Halle, Petersroda, Wulkow and Bredenfelde, using the great variety of APCs and trucks.

From 1962, conscription became mandatory for all GDR males aged between 18 and 60 requiring an 18-month service, and it was the only Warsaw Pact military to offer non-combat roles to conscientious objectors, known as "construction soldiers" (Bausoldat). At that time, 85,000 soldiers were enlisted and it climbed to 127,000 by 1967. It grew slowly but steadily until reaching the 1987 peak. All this time it was a mix between 50% career soldiers (and officers) and short-term conscripts. Since the NVA was popular (it never took part of example in crowd control operations), it never lacked recruits, in an economocal situation which became dire in the 1980s. 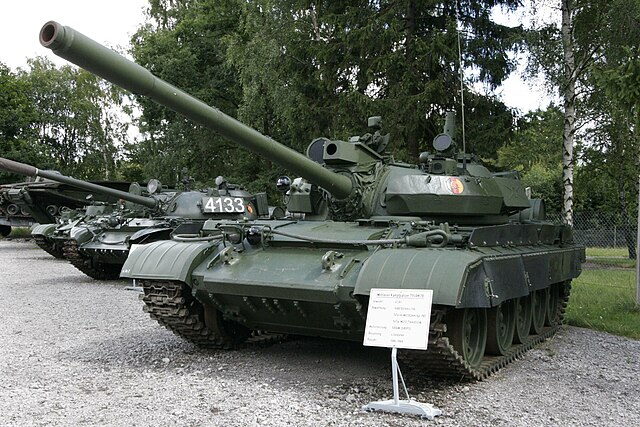 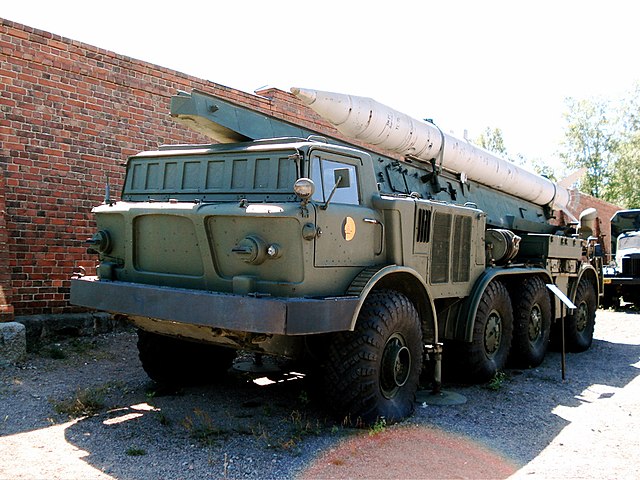 In 1990, when reunification was started, the Bundewehr's federal Materiel Depot Service Gesellschaft (MDSG) had to handling some 2,761 tanks (T-54/55 and T-72s of all late variants), IFVs like the BMP-1, BMP-2, BTR-152, 60, 70 and BTR-80, BRDM1/2, but also Polish-Czech vehicles such as the OT-64 and Hungarian Fug armored car. The motorized infantry and support counted on 133,900 wheeled vehicles, Soviet for a majority. Also it was left with 2,199 artillery pieces. Only the Soviet army had access to (and repatriated) tactical missiles and their TEL vehicles. However SAM batteries in some case also fell under German control.

IN reality only a few armored vehicles were built in East Germany compared to Poland or Czechoslovakia. Some local variants and denominations were made however. The East Germans for example used the Czech-produced tanks and AFVs whenever possible, because they were believed of better quality and Soviet doctrine. However, East Germany created many specialized vehicles based on Polish or Czech-built tanks.

The Kampfpanzer T-72 in NVA service 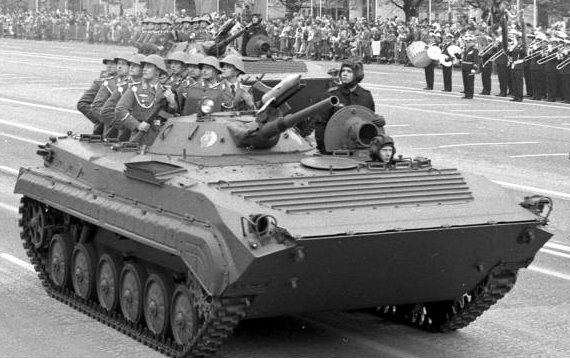 East Germany obtained 24 of these, delivered in 1986-1987 possibly from Czechoslovakia. They were passed on to the Bundewehr but not standardized and sold or given to museums.

1,316 of these BTR-70, locally called Schützenpanzerwagen 70 were delivered 1980-1990 from Romania. *Two extra radios, two/three whip antennas and a slim telescopic mast on the right side of the hull roof.
**R-809M2 radio and fitted with four whip antennas.
***Has detection and marking systems, but remained as a Prototype.

The NVA never took part in combat operations, only sending advisors during the Prague Spring of 1968, so a support role. The 7th Panzer Division and the 11th Motorised Infantry Division were nevertheless deployed to support the 20th Guards Army and 1st Guards Tank Army respectively. But since WW2 was not forgotten, this created a stir and soon, they were "kept out of sight in the Bohemian forests", only travelled by night, soon withdrawn and never called back again.

Reputed NVA officers also served as combat advisers in Africa, taking part in some of the bloodiest civil wars here. Among the first, were NVA advisors in Congo, in 1973. Others intervened in the 1980s in Algeria, Angola, Ethiopia, Guinea, Iraq, Libya, Mozambique, South Yemen, and Syria.

In the 1970s the High command of the GSFG or "Group of Soviet Forces in German" asked the NVA to capture West Berlin, a plan called "Operation Centre". Some 32,000 troops were to be mobilized (two divisions), escorted and covered by the GSFG's Soviet 6th Separate Guards Motor Rifle Brigade. The plan updated and practiced virtally every year, but at some point substituted to just containing Berlin. In the autumn 1981 however, the NVA was placed on high alert during the Polish troubles, ready to intervene in support of Soviet Forces. It was ended by the declaration of martial law in Poland on 13 December 1981 under Marshal Jaruleswki.

Other high alert, combat readiness state included the construction of the Berlin Wall in 1961. The next year also, the Cuban Missile Crisis of 1962 saw all units on the war footing and prepared. The last mass mobilization and patrols was in late 1989, during the protests in East Germany preceding the fall of the wall.

BTR-152. Only the SPW-152 armored ambulance and SPW-152U command version were local variants