A Howitzer Motor Carriage based on the M5.

The large-scale production of the M5 quickly led to several variant prototypes, including self-propelled artillery. One of these project was a Howitzer Motor Carriage, equipped with the regular ordinance 75 mm (2.95 in) howitzer used throughout the war by the US Army and the Marines Corps. The basis was a M5 chassis, with its turret removed and replaced by a new open-top model, larger, with a short-barrel M2 howitzer and 45 rounds of ammo. This prototype was named T17E1 HMC. The M2 howitzer, a more advance version of the compact M1A1, was eventually replaced by the M3. Ammunition included M89 smoke shells and regular M48 HE (High Explosive) antipersonal rounds. The only other weapon on board -besides the personal guns of the crew- was a Browning M2HB cal.50 (12.7 mm) machine gun mounted on the turret rear, intended for anti-aircraft defense, with 400 rounds.

The M8 Scott in production

The tests done in March 1942 with the T17E1 HMC were all satisfactory, and the first batch was ordered in April. Production was scheduled for September. In all, 1778 were produced until January 1944. Official designation was Howitzer Motor Carriage (HMC) M8, but it quickly received the "Scott" nickname. There were few differences compared to the M5. The hull was identical, although without the forward hull cal.30 (7.62 mm) mount, the wxtra space was used for extra howitzer ammunition storage. Since the arc of fire of the 12.7 mm (cal.50) machine-gun was generous, it was also used as an antipersonal defense gun, with devastating effects. However, the HMC was never intended to fight on the first line.

The M8A1 was the only variant, based on the M5A1 chassis, including all its features. The M5A1 hull was kept unchanged, except that a fixed hatch was mounted instead of the cal.30 (7.62 mm) mount. The motor was still the twin Cadillac V8 with hydramatic transmission. However, the M2 howitzer was replaced by the improved M3. Some M8s were equipped with side protection panels, and extra equipment, including camouflage nets. Others had a frontal bulldozer rake for jungle-clearing. More M8A1s were produced than M8s, but all development stopped when the M7 Priest became available in numbers. M8 turret production didn\'t stop, and many were allocated to the support version of the LVT, which fought mostly in the Pacific.

Contrary to the M5, which was allocated to Commonwealth and British forces under the name of Stuart Mk.VI, the M8 was mostly used by the US Army and Marine Corps. The Howitzer Motor Carriage fought with various artillery battalions in almost all theaters of war, in North Africa and the Tunisian campaign, Sicily, Italy, Normandy, Germany, but also in the Pacific.

The Free French received some of them, but after the war. These saw extensive service until 1954, during the Indochina conflict. Some were also employed by the South-Vietnam forces as far as the end of the Vietnam war. Some were used also by the Khmers national army, Laos and China. The Philippines also operated all M8s left on the island after WW2.

Links about the M8 Scott

The M8 Scott on Wikipedia

HMC Scott M8A1 in Normandy, July 1944. In the bocage, enemy troop movements were sometimes so hard to detect that M8 battalions found themselves attacked by infiltrated German infantry, in normally "cleared" sectors, but could repel assaults, thanks to their cal.50 (12.7 mm) machine-guns. 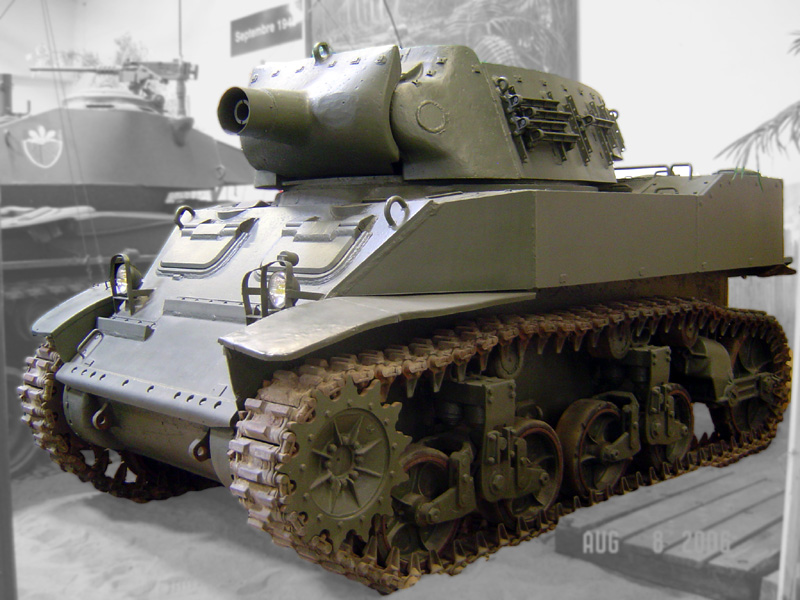