With the export successes of the Carden Lloyd Mark VI, Vickers started to care about an expressed need that was not addressed at the time by some nations: Having an amphibious version of the nimble tankette. Vickers at the time launching itself into a flurry of prototypes; among which were the 1927 Vickers Wolseley Wheel Track Tank, the Vickers D3E1 Wheel Track Tank, the Vickers Mark 1 and Mark 2 "Patrol" turreted light tanks (Sold to Sweden, Denmark, Finland, and Portugal), and the Light Tank Model 1933, 1934, 1936, 1937, 1938, also sold to Finland, Lithuania, Latvia, Argentina, Belgium, and Switzerland, all in adition to the famous Vickers 6 ton.

The Vickers Light Amphibious Tanks A4E11, A4E12 were two prototypes as designated by the war office, destined to test the concept of a floating light tank. The main idea was to use on for marshy terrains, crossing rivers and any watery obstacle, of even take part in a sea landing.

Thus was an in-house Experimental tank developed from 1931 and until late 1932. Basically more a light tank rather than a tanette, base not on it's weight but armament, as it had a turret. The initial two received the designation A4E11 and A4E12, but they were also known as the L1E1 and L1E2. They were demonstrated to the Britsh Army

Overall, this was indeed a slightly heavier tank than the previous Carden lloyd tankettes which barely regstered 1,5 tonnes in working order: As modified, the vehicle was 2.17 long tons (2.20 t), with a length of 13 ft 4 in (4.06 m), a width of 6 ft 9 in (2.06 m) over tracks and a height of 6 ft 2 in (1.88 m). Its Crew conly comprised a driver, seated behind a singular rounded hatch forward, followed by the turret ring with the machine-gunner/commander behind.

The whole font plate, forming a beak was sloped for bullet deflection forward, but the most caracteristic part of the design was its pair of flotation caissons, each side of the central hull, above the drivetrain. They acted as mudguards and for flotation, both being angled forward and aft at least for basic floating efficiency when swimming. These were in metal, but fill via balsa wood. The other major innovation was it's single propeller aft, protected in a swivelling shroud. Steering was achieved by a single rudder behind it, actions by the driver through the same lever to manage the tracks.

For mobility on land and water, the power source was a single Meadows petrol 6-cylinder 90 bhp installed at the front, which procured a top speed of 27 mph (43 km/h) on road and 3.72 mph (5.99 km/h) in water. Operational range was 100 mi (160 km). It used Horstmann Suspensions just like other Vickers light tanks with a pair of bogies on either side, each with a central axis supporting both two ruberrizer roadhweels, of the 6-leg spider type, and a set of two leaf spring suspensions in between them.

The last roadwheel also acted as tensioner as the light and narrow tracks, with short links, circulated by the roadwheels, sandwiched in the pins. The drive sprokets were located at the front. The limitations of the system was well-known. When running at max speed on evern ground and steering left or right hard, it was easy to throw off the tracks. Still, 27 mph was not a lot for a scout tank and thus the risk was reduced.

As for armament, it was limited with the one-man turret at the rear, a simple "drum-type" with a single piece hatch on top, opening forward to protect the commander. Inside was a liquid-cooled 0.303 standard Vickers Machine gun. It was in part housed in a tailored chassis managed in the overhanging box forward. There was no traverse, only elevation with a simple circular bearing.

The serie was followed by the L1E3 in 1939 (army designation A4E3), see the article, same recipe but "pontoon" like structure, mich more "seaworthy". The vehicle also had a sort of "trim vane", which was free-floating, installed in front of the hull to deflect waves. Two military-grade sets of blackout light were also mounted on either side forward on the flotation caissons.

The entire hull was riveted, and the driver's protruding structure forward of the fighjting compartment lacked visibility, as having a single slit forward, and nothing on the sides. It was topped by an opening structure acting also as a hatch and hinged at the back. It could be fixed in open position for normal road operations. The ensemble with the driver and fighting compartment were offset to the left of the hull, opposite the transmission and exhaust system.

The engine exhaust was protruding from a boss right of the hull, with two pipes, one for admission, one for exhaust inside a cylinder well above the water level to avoid admissions. The exhaust pipe went behind the turret base. In fact the A4E11 and A4E12 prototypes only diverged by the exhaust system and boss above the compartment, appearing on the second, and the driver's compartrment. The heavy lifting hatch was abandoned by a simple single piece with a boss for the driver's head. Visibility was still very poor when closed.

The Vickers light AB in action 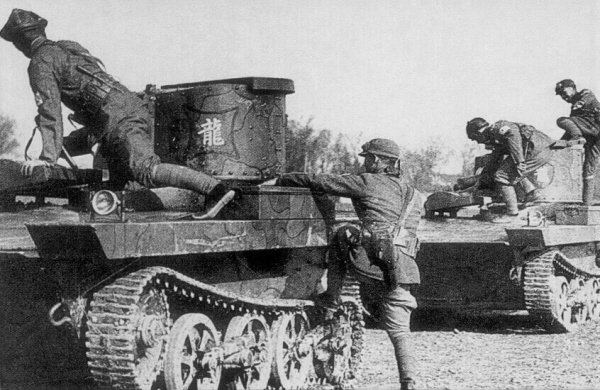 Vickers-Carden-Loyd Light Amphibious Tanks of the KMT, circa mid-1930s.

Though not adopted by the British army, Vickers sold this tank throughout the world. Main buyers were China, the Dutch East Indies, Thailand, and the USSR. In fact the Soviet T37 came directly from this design.

China, or more precisely the Chinese KMT is the best documented and largest user of the Vickers Amhibious Tank: The first arrived by early 1933, in all 12 Vickers-Carden-Loyd Light Amphibious Tanks sold to the Canton (Guangdong) Provincial Government, which were possibly unarmed and later appropriated by the Nationalist Army. In fact the totality used by the KMT in Shanghai was listed as high as 60, in addition to 12 VCL Light Amphibious Tanks bought in addition of the first 33, to reach a total of 48.

As for the Dutch East Indies, It seems they were recived only two delivered in 1937. Their fate is unknown. Poland was to receive a single vehicle and a licence, but negotiations failed and instead, the PZInż works started a local project instead, called the PZInż 130, inspired by the British concept. The latter was not accepted into service but was declined into the PZInż 140, the very basis of the 4TP tank.

Japan also showed interests. There was no shortage of swampy wildernesses in Asia indeed, and the vehicle could be used to ford rivers, for the operations in China. A single tank and a licence were sold, but nothing resulted of it. Rather, the Japanese would prefer the solution of jetisonable pontoons in the near future, better adapted to landings and sea operations.

The most famous case was of course the Soviet Union. After copying the A1E1 Independent for their T-28 and T-35 medium and heavy multi-turret tanks, copied and mass-produced the Vickers Type E (6-ton) as the T-26, even the Carden lloyd Tankette as the T-27, they also purchased a single Vickers M1931 for tests and eventually replicated it relatively faithfully as the T-37A amphibious tank, of which 1,200 exited Soviet Factory until 1941. The Soviet Union was in fact the only country to embrace fully this type, later modernized as the

All in all, the rejection by the Army was in large part due to the sacrifices made in armour to keepthe weight low and ensure floatability by using these small caissons. They achieved buoyancy but to such a proce they were almost sofstskin vehicles. The armor plate at the front indeed was perhaps 6mm thick, while the driver compartrment, turret base and the latter were protected by 11 mm (0.43 in) of hardened steel. Being both small, with a limited range, and weakly armed, they lost their appeal as scouts, especially compared with armoured cars. In UK alone, the prospect of using these in operation never was seriously examined for possible tactical operations, notably with the kind of doctrine looked for at the time.

In servuce with the Chinese KMT, 1937

Preserved at Kubinka. It was later the inspiration for the T-37.