Since the subject has not been treated yet, or in a very partial way related to the Saczeany APC project in 1918, we need to dwelve a bit into the matter, before going on considerations for motorized warfare. Prior to the war, Canada relied on militias. When WW1 broke out, the Canadian Expeditionary Force was created in September 1915. The Canadian Corps was formed after the arrival of the 2nd Canadian Division in France, mostly volunteers. There was no conscription implemented until 1917. The Corps was expanded with the constitution of the 3rd Canadian Division in December 1915 and the 4th Canadian Division in August 1916. A 5th Canadian Division was wanted by the politics as well as a reorganization in February 1917, but opposed by Currie and his staff and never fully formed. It was ultimately dissolved in February 1918 to help the other four divisions, replesnishing their losses.


The Corps remained under overall command of the British Army, and Canadian leaders started to pressure the British Government for an independent command, especially after the costly Battle of the Somme. They wanted to reunit all units into a single operation zone, rather than spreading divisions piecemeal throughout the whole army. Lt. General (Sir) E.A.H. Alderson was in charge until 1916, the Lt. Gen. Sir Julian (Lord Byng of Vimy) Governor General of Canada. At last in the summer of 1917 arrived in command from the 1st Division, General Sir Arthur W. Currie. Not only it was the corp's first Canadian commander but this independence allowed a through reevaluation of tactics generating new "out of book" ones, making at the end of the war one of the most effective and respected military formations on the Western Front. Indeed, their use of combined-arms tactics to achieve breakthrough was not only innovative in its "serious" implementation for the first time, it was also very successful and inspirational for the rest of the allies. 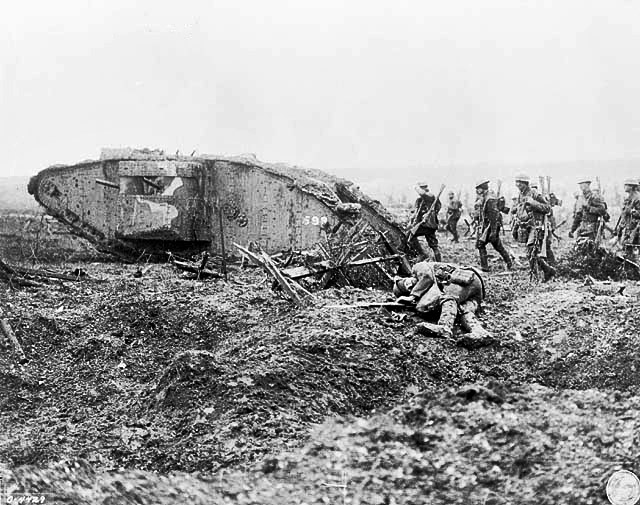 Canadian soldiers advance behind a Mark II heavy tank during the battle.

The Canadians under Byng already illustrated themselves at the Battle of Vimy Ridge (start 9 April 1917) with a classic infantry barrage, but with all four Canadian divisions assembled in a single corps in the field, reinforced by the British 5th Infantry Division and supported in the north by the 24th British Division, Ist Corps and XVII Corps in the south. The 1st, 2nd and 3rd Canadian Divisions captured their first objective, the Black Line that day, but not the 4th Division until hours after. Positions were consolidated, and advance resumed after 7:00 a.m., the 1st Division taking half of its second line objective "Red Line", same for the 2nd Division and 3rd Canadian Division around 7:30 a.m. The exposed left flank created by the failure of the 4th Canadian Division caused the 3rd Canadian Division to stop and create a divisional defensive flank, counteattacked at 11:00 a.m. by the German 79th Reserve Division. To bolster the general effort, three fresh brigades were moved up to the Red Line at around 9:30 a.m. the following 10 April, allowing the first three divisions to reach the Blue Line at around 11:00 a.m., notably Hill 135 and the town of Thélus. Troops consolidated under an artillery barrage for 90 minutes, but advanced resume at 1 p.m., and the Brown Line fell around 2:00 p.m. Only Hill 145 and "the Pimple", fortified highpoint (Givenchy-en-Gohelle outskirsks) were left to capture. After reinforcements, by nightfall only "the Pimple" was left standing, attacked after an artillery barrage by the 10th Canadian Brigade, which was captured after heavy fighting on 12 April. On 12 April 1917 as night fell, Vimy Ridge was in Canadian hands, but the corps had suffered 10,602 casualties (3,598 KiA, 7,004 wounded), utterly destroying the German Sixth Army. The ridge was never recaptured.

Currie's tactics and the spring offensive

For what we are concerned here, Arthur Currie was in charge during the Second Battle of Passchendaele (October-November 1917) when the Canadian Corps (which would suffer here 15,654 casualties) relieved the exhausted II Anzac Corps, basically resuming the advance gained during the first Battle of Passchendaele, capturing the village and attempting to gain drier winter positions, on higher ground. Indeed, the previous winter saw troops fighting miserably in a deep, liquid mud in unprepared positions. The Canadian Corps for the first time executed a series of attacks with limited objectives, with intervals of 3-5 days. The final push was made on 10 November, these delays allowing for divisional reliefs. In the end, the Passchendaele–Westrozebeke ridge was captured, but Westrozebeke was not captured. Between Caporetto and the Battle of Cambrai the British had to divert resources from the Ypres Salient and on 20 November, Douglas Haig ended the offensive in this sector. Canadian troops by then operated with tanks in the field, British tanks under british command but with a liaison officer witin the Canadian HQ. Aviation provided on site intelligence, mastery of the sky, and bombing/strafing on demand when the occasion rose.

The last Canadian actions of the war, called "Canada's Hundred Days" was related to the series of attacks made by the Canadian Corps between 8 August and 11 November 1918. At large it was called the "Hundred Days Offensive" but the Canadians played a substantial role during the offensive. At Amiens, Currie plan depended on large-scale use of tanks to achieve surprise, avoiding a preliminary bombardment. That tactic was successfully employed at the Battle of Hamel. The operation was supported by more than 500 tanks, mostly French. Used en masse, tanks were successful in this battle, attacking German rear positions after the breakthrough, creating panic and confusion. This was a swift advance followed by breaking the Hindenburg Line proper and the final pursuit to Mons, which cost Currie's the late underserved reputation of a "butcher", as he persisted in sending reinforcements to needlessly capture a city that could have been bypassed, especially as the armistice was imminent.

Canadian troops resting on the side of a road between Arras and Cambrai. Behind, a supporting French Renault FT.

The tall and recoignisable "Guts and Gaiters", Ontario born Arthur Currie, was for more historians a brilliant tactician who used his skills to reduce casualties. He is wildly credited with accelerating the end of the war. According to Jack Hyatt through his leadership of the Canadian Corps, he was described as a capable administrator, cool headed, tempered and sound of judgment who knew how to surround himself with a capable staff, requiring and taking in account advices, never rigidly sticking to a plan. Most of his tactics effectiveness relied on existing ways (artillery, tanks and aviation) combined to the best effect in the way his staff worked together to achieve objectives and react on the fly. All the time of the last offensives, the four Canadian infantry Divisions relied entirely on allied (British and French) Tanks. Canada's first tank unit was not raised until late in 1918. These were considered to be part of the Machine Gun Corps, the 1st, 2nd Canadian Tank Battalions and 3e "Bataillon de chars d'assaut" (From Montreal). It was too late however to join the fighting, but the 1st Canadian Tank Battalion obtained Mark V tanks from the U.K. when training and was finally authorized two days after the armistice. It went back only in the 1930s with small attempts at mechanization. It was not the first Canadian motorized unit raised in Canada though. This privilege went to the Canadian Automobile Machine Gun Brigade, raised in 1914 already by the visionary french-Canadian millionaire captain Raymond Brutinel.

Patent from the Patent CA203748 design by Frank Saczeany in 1918, Canada’s first armored vehicle designs and first APC. Saczeany’s primary objective was to design a vehicle comparable to a tank, but with a power-operated door at the rear for entry and exit of soldiers, delivered directly to the enemy's trench. Basically it was an early Armored Personnel Carrier (APC) such those developed by France with the initial Schneider, and the british on the field with the Mark IX Pig in 1918. He imagined a vehicle able to protect a “large number” of men over rough ground and its overall shape was very similar in the layout of British ‘rhomboid’ tanks of the era. His drawings were made on 16 September 1918.

reconstruction of the Saczeany Armoured Personel Carrier (APC) in a fictional livery, based on common styles of the period with its troop deployment platform closed. Illustrations modeled by Mr. C. Ryan, funded by our Patreon Campaign