The 2K12 "Kub" was the main tracked armoured carrier for the medium-range anti-aircraft ground-to-air missile SA-6 (NATO codename "Gainful"). In service from 1967, it has been designed by NIIP/Vympel and MMZ (GM chassis) and manufactured by the Ulyanovsk Mechanical Plant until 1985 to around 500 vehicles, and declined into the 2K12 Kub, 2K12E Kvadrat (export version), 2K12M3, 2K12M4, exported 33 countries, and seeing action in a dozen conflicts, still in service today.

The 3M9M4 (NATO SA-6 "Gainful") was developed as a second-generation SAM (Surface to Air Missile) in USSR. It was developed for the PVO-SV (Soviet Army Air Defence), after request of 18 July 1958 from the CPSU Central Committee to perform a role similar to the old S-125 (SA-3 "Goa") and supplement the larger, long range 2K11 Krug (SA-4 "Ganef") covering the low altitude. Design objectives essentially the same as for the S-125, being able to destroy an aircraft flying at 420 m/s, up to to 600 m/s between 100-200 m to 5,000-7,000 m on a 20 km radius with a first hit probability of at least 0.7. Development was authorised in 1958 and the weapons system program fell under responsibility of Tikhomirov NIIP. The missile design itself went to Vympel. The it was paired with a self propelled mount, highly mobile and al-terrain, like the 2K11 Krug but on a more lightweight tracked chassis, essentially similar to the ZSU-23/4P Shilka SPAAG.

The main purpose of this armored tracked vehicle was to carry a SAM, covering frienly ground units by a protective bubble. It was as efficient as was the missile itself. But the latter accumulated problems. The mix of ambitious specifications some immature technology like the Continuous Wave (CW) semi-active homing missile seeker, solid propellant ramjet, had the effect of a very long, protracted and difficult development. At some point the seeker and powerplant had the effect of an ongoing serie of test failures. IOC was only achieved by 1967-1968, after ten years. Production started by then, and went on (with improvements in between) up to 1983. These issues were fixed during that time, low power for the missile radar seeker, badly designed nose cone, badly designed missile air inlets, low quality heat shield (afterburner chamber in titanium, later replaced by steel). In August 1961 Toropov was replaced by Lyapin at the head of Vympel design bureau. In January 1962 he was replaced in turn by Figurovskiy. By 1963 only 11 out of 83 missiles had a workable seeker installed and three launches were successful. The first-ever air target strike occured on February 18, 1963 (Official state trials at Donguz test site, Orenburg). The target was an Ilyushin Il-28 bomber. Approved, on 23 January 1967 its went into production.

About the 1S91 self propelled radar

The self-propelled 1S91 engagement radar system, was a derivative of the same chassis, tailored to serve the SA-6. It had an integrated acquisition radar and assisted four 2P25 Transporter Erector Launcher (TEL) which carried each three 3M9 missiles (NATO nicknamed them the "three fingers of death"). In supportwere deployed four or more 2T7 transloader/transporters trailers mated to the ZiL-157 truck. This 1S91 engagement radar system had a two stacked turret system. The lower one had the acquisition radar mounted, and the upper one, a final tracking/CW illuminator radar. This was in order to acquire targets with coarse tracking and do some fine tracking and illumination before launching. It was better than the old system combining a 2K11 Krug using a separated acquistion radar and datalinks, plus an engagement radar. Variants were developed during production.

A variant featuring a greater engagement envelope. The missile seeker was better suited to defeat countermeasures, and interrupt radar emissions, notably to defeat the AGM-45 Shrike ARM. It could also support an ARM decoy. Production and service started in 1973. The 2K12 "Kub" was already scheduled for modernisation in 1967, and work was done under the direction of the designer Ardalion Rastov. Testing were peformed in 1972, and the M1 was adopted in 1973. It was improved again in 1974-1976, with better general combat characteristics ending with the "Kub-M3" entering service in 1976. In 1971 the design team was invited into Egypt in 1971, seeng the "Kub" in operation abd started the development of the "Buk" system, in which there was no longer the need for a radar vehicle. Each TEL had its own fire control radar (TELAR) enabling multiple targets engagement.

The development of its successor 9K37 "Buk" in 1974, did not prevented high interoperability between the system. As such, the "Kub-M4" system was basically a retroffited system. The Kub-M4 was identical to the Kub-M3 and received its informations from the 9А310 TELAR of the 9K37 Buk. It allowed more fire control channels, available missiles and a Buk system quick to enter service. The Kub-M4 entered service in 1978 after successful trials.

Ongoing plans to integrate an active radar homing missile were traduced by the Polish WZU and Grudziadz. They carried a Sparrow missile. The technology demonstrator was shown at the MSPO 2008 defence exhibition in Kielce. Vympel also worked on the RVV-AE air-to-air missile to modernise the Kub missile system. Czech company RETIA also presented a modern fire control radar upgrade with an optical channel, new multiple-function color displays, radar upgrade and IFF. In 2011 the "2K12 KUB CZ" fitted with Aspide 2000 missiles in launch containers by Retia was showcased at the International Exhibition of Defence and Security Technologies in Brno. 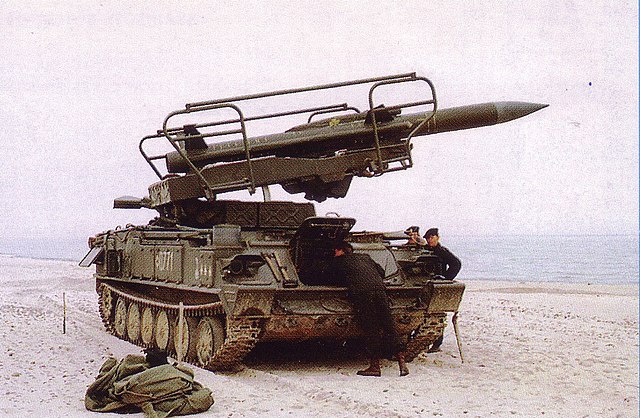 Egyptian 2K12 during the Yom Kippur war, 1973. Others were painted with the usual light olive and brown stripes over sand beige

Libyan 2K12 during the UN intervention. In March 2011, Gaddafi's forces did not managed to shoot down a single NATO plane.

Ukrainian Kub with digital paint as of 2018