With the Panzer 58, Switzerland built its own, first mass-produced main battle tank. Work was achieved by a state-owned factory plant, Eidgenösse Werke in Thun. Unique with its cast, small rounded turret and partly cast hull, the type was similar with both Western and Soviet tanks of the type. The Panzer 58 (10 machines) were equipped by a British 20-pounder similar to the one that was fitted on the early Centurion at that time, but the mass-produced Panzer 61 (150 machines) appeared thereafter, entering service in 1961. It was rearmed with the L7 105 mm NATO gun, later with a thermal sleeve, but dropped the auxiliary unit for a single Mercedes-Benz 8 cylinder V diesel engine (630 hp). Eventually the hull armour was raised up to 120 mm on the turret and hull fronts. The Panzer 61 however, already in the mid-1965 was considered by some obsolete, and gradually upgraded from 1967 up to the 1970s. The resulting upgrades gave the AA9, which was kept operational until the late 1980s alongside the new Panzer-68.

Panzer 61 at the Thun museum

Eidgenoessische Konstruktionswerkstaette started working on the Panzer 68 right after the introduction of the Panzer 61, back in 1961. One of these improvements consisted in fitting new, wider tracks for a better mobility and traction on mud and snow. Later on, a crucially important main gun stabilization system was created and improved over time. In 1961, early series were still given a coaxial 20 mm autocannon that proved unusable in practice and replaced by a standard Pz Mg 51/71 LMG, on the first prototype of the future Panzer 68 and the Panzer 61 model 1963. Eventually, after much debate and five years after the end of the production of the Panzer 61, the Swiss parliament decided to vote the funding for 170 of these improved tanks, that were known as the Kampfpanzer-68 for the year of introduction.

Evolution of the Panzer 68 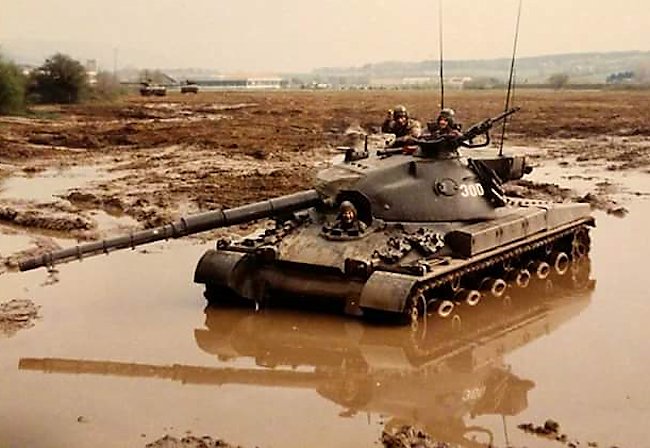 The lack of a bigger gun and of composite armour capable of defeating APFSFDS rounds for example was a real problem. Experts estimated that an encounter with the Soviet T-72 would certainly not seen the Swiss tank at its advantage. Already in the late 1980s, the non-upgraded Panzer 61 were converted or retired, followed by the early series of the Panzer 68. However the reputation of the Panzer-68 was overall damaged by a political scandal which was the last nail in its coffin.

In 1979 the trustful weekly Weltwoche published reports of active service panzer 68 that led to a political scandal of first magnitude in Switzerland. Indeed, the chief of armoured forces of the Swiss army expressed that the Panzer 68 was "not fit for combat", which caused the parliament to leverage a commission of inquiry with experts. They rendered their verdict which shown without doubt that a dozen of technical problems, compelling evidence of the highest top brass claim: The collective NBC protection (Nuclear, Bacteriological, Chemical) was for example, blatantly insufficient, forcing the crew to wear individual masks, which greatly reduced performances in operations. Another grave limitation was the poorly designed gearbox that forbade shifting in reverse while moving. The tank had to stop before, which was a two-time operation, a crucial, possibly fatal delay if a bad encounter was made.

But probably the most disturbing finding was the conception of the turret ring electric control, which operated apparently in the same frequencies than the radios in the turret bustle. As a result when the latter where at full power, the turret was afflicted by erratic moves which would have prevented it to be used against any foe.

In operations, the radios would have been shut down to authorize proper turret handling in combat, therefore severing all relations with other tanks and HQ during the fight. But probably the last and probably most incredible defect ever found was due to a faulty electric grid design, which caused the main gun to fire the round already layed in the gun when switching on the heating system !. Eventually the Swiss tabloid Blick famously quoted an article "The Panzer 68 is much more dangerous than it seems!", but the damage pushed Rudolf Gnägi, then minister of defense to resign. This scandal weighted much later in the parliament decision to choose the proven German Leopard 2 instead as a licence-built replacement, whereas the program led to a complete upgrade and costly range of modification with the Panzer 68/88 in 1993.

A replacement was studied but the task of creating a 3rd generation MBT proved too much for the Thun facility. Thun called it the Panzer 2000 (Pz2000) project. The parliament preferred the secured and cheaper option of adopting the Leopard 2A4, licence-built as the Panzer 87 at the same factory. This upgrade of the Panzer 68 saw the introduction of a new fire control system, copied from the one produced for the Panzer 87 (Leopard 2). This model also had the "Grosser Turm" (bigger turret). One Panzer 68/88 was a temporary prototype, upgraded Pz68 AA 2 with additional armour protection.

The Bruckenlegerpanzer 68 at the Steel parade 2006

Conversion began with the oldest series and non-converted vehicles to the /88 standard. These were kept in service from much longer than the Panzer-68 itself.
Entpannungspanzer 65: The standard ARV (Armoured Recovery Vehicle, model 65. An intermediary variants based on the previous panzeer-61 chassis but upgraded with Pz-68 elements.
Panzerartilleriekanone 68: Experimental self-propelled gun. 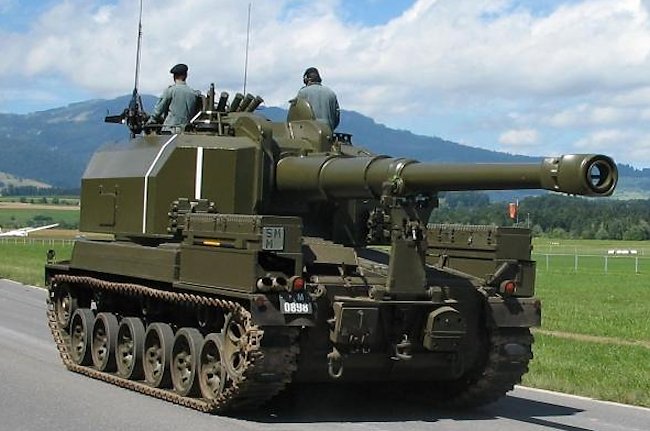 Swiss Army Panzerartilleriekanone 68 (15.5 cm Art Pz Kanone 68) Photo = www.militaerfahrzeuge.ch
Brückenpanzer 68: The standard bridgelayer, single-piece span, of 18.2 metres (59 ft 9 in). 30 were delivered in 1974-1977 (still active 2011)
Fliegerabwehrpanzer 68: The experimental SPAAG, or Anti-aircraft fitted with the Flakpanzer Gepard turret (2x Oerlikon 35mm). For this, the hull needed to be widened by 18 cm (7 in). Two were tested in 1979-1980, but no orders followed.
Zielfahrzeug 68: The Target Vehicle model 68, mobile and remote for the fire training of the M47 Dragon ATGM. The turret was replaced by a dummy easily replaceable and made of the same steel skirt plates protecting the tracks. The running gear was the one of the Panzer 61 (tracks and roawheels).

The Panzer 68 in service

Despite its clearly flawed design, the Panzer 68 made the bulk of the Swiss cold war armoured forces until the adoption of the Leopard 2 in 1987 (Panzer 87). Despite a full scale modernization in 1993 (as the model 88), the type was relegated to secondary duties and definitely retired in the early 2000s. In the 1970s the Austrian army showed interest in the model, but eventually declined any purchase when the affair erupted. Eidgenoessische Konstruktionswerkstaette tried to sell its upgrade package, the Panzer-68/2000, but without much success after trials. In 2002-2004, negotiations took place with Thailand for selling a batch of 200. But the Thai government eventually the rejected offer and surviving tanks were sold for scrap in 2005. Only a few are visible today, noticeably at the Thun museum in Switzerland. 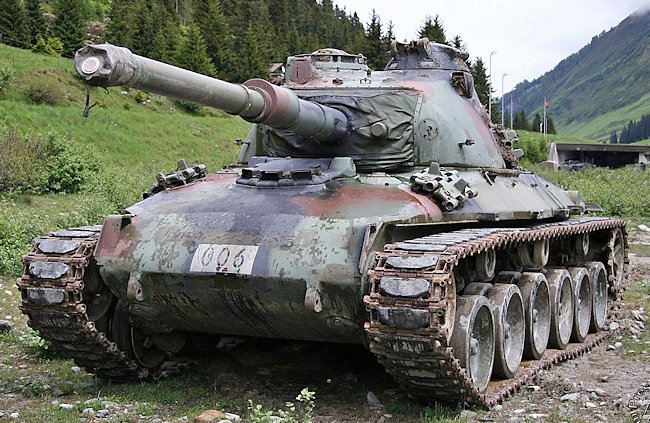 Marc Rogivue, was a Panzer 68 tank commander and platoon leader in the 1980s. These are some of his memories; - The Panzer 61,68,68/75,68/88 all had an auxiliary engine in addition to the main Mercedes engine. We needed it to start main engine, for heating and to turn turret. I remember the was also a Haubitzen prototype on the basis of the Panzer 68 tank chassis. They planned to replace the M109 with it. The project was abandoned after the chassis tumbled over when the cannon fired in 9 o clock position. I believe the Thun museum has this prototype.

Each tank had four crew members, known as a group, consisting of commander (corporal), gunner, loader and driver. There were four tanks in a Platoon. The platoon leader was a lieutenant. He commanded one of the 4 tanks in his platoon. There were 3 platoons per company. The company leader, a captain usually had a tank rather than a command vehicle. So there were 12 tanks per company and an additional tank for the Captain making a total of 13 tanks. Three tank companies made a tank Battalion. Each Battalion had 39 tanks.

There was only one French speaking tank Battalion. All the others were Swiss German. The Swiss French Battalion called their units section (Platoon), compagnie, battalion. The Swiss German Battalion called their units Gruppe (tank crew), Zug (platoon), Kompanie, Battallion. In my time during the 1980's, the tanks were kept down in the valley and we drove them up to the mountains for full calibre shooting. Later they kept tanks in the mountains because it didn't make sense to drive them up and down twice a year. I remember that we trained shooting the main gun while wearing gas mask inside the tank, but it was basically impossible. We could shoot but not hit anything.

One interesting point about the Panzer 68/88 Tank was that it introduced the laser targeting system for the German Leopard 2 which we, the Swiss, manufactured under license. We improved the system and therefore was faster than the one fitted to the Leo 2. The Swiss Army had a couple of duels between Panzer 68/88 vs Leo 2 tanks and we won most of them, but only on the first round.

The Leo 2 could target, store and attack a second target while the first target is being attacked. The Swiss Panzer 68 could not do that. The Leo 2 has an independent turret on top of the main turret which was a huge advantage attacking multiple targets. When the Swiss Army purchased some Leopard 2 tanks in the late 1980s early 1990s, I remember that the Swiss made, Panzer 68 was redeployed to the Field Battalions while the Leo's were deployed to the Mechanized Battalions. Field battalions are only used to block, protect and hold ground. Swiss Mechanized Battalions are used for assault and to recapture lost ground.

There was virtually no anti-aircraft protection for tank Battalions. Crews had a light machine gun but that was totally ineffective. I once shot down a helicopter in the simulator with Sabot. That was a lucky hit. That's why the Swiss air force is super important. All rivers and highways down in the Mittelland are in fact tank barriers. Most people are not aware of this fact, but when you travel through Switzerland and know what you're looking for, you can see bridges and tunnels prepared for demolition with explosives, riverbanks and highways being intentionally designed to be uncrossable for tanks and anti tank Bunkers along most rivers and highways. It would be extremely difficult for a mechanised enemy to cross through Switzerland without heavy losses.

I am not sure if you should call the Panzer 68 a failure. It certainly had its limitations but I would have taken on a Centurion or AMX any time or even a M60. I don't think any of them could reverse without having to come to a standstill first. Certainly not Centurion or AMX, not sure about the M60.

Also keep in mind that the panzer 68 was a defense weapon and not an assault tank, so for its mission it wasn't that bad at that time. I never experienced the turret firing or turning involuntarily. We've heard gossip but took it as that, just gossip.

Late Panzer 61 AA9, upgraded to the Panzer 68 standard and camouflaged, 1970s for comparisons

Prototype of the Fliegerabwehrpanzer 68, 1979. This is a hasty photoshop. In fact the hull was quite different. This illustration will be updated soon.