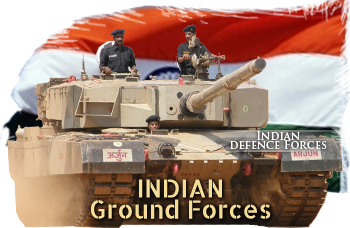 Indian Tanks from the Origins to WW2

The Creation of the modern Indian Army was related to the independence in 1947 but it not fallen out of the blue. Warfare in India was indeed thousands of years old. Since the Mauryan dynasty that built the first Indian empire (300-200 bc) tactics and formations were known and refined as an art since centuries, forged by constant warfare between kingdoms of the subcontinent. Since the occupation of India by the British East India Company in the XVIIIth century, local auxiliaries were seen in the Empire's armies all around the globe, a tradition passed onto the the British Indian Army, right in ww1 and ww2 from North Africa to Italy against the Germans & Italians and against the Japanese on the Indian border, Singapore, Malaysia and Burma. Note: There is a WW2 Indian Armor post in preparation.

Since the 1930s, there were already several types of armoured cars and light tanks modified for colonial service, known as the "Indian pattern" and often tropicalized. WW2 saw the only model of armoured vehicle built in India, the Armoured Carrier, Wheeled, India Pattern Mark II/IIA/IIB/IIC built from 1940 to 1944 after a Ford Motor Company of Canada chassis and assembled and completed by the East Indian Railway and Tata Iron & Steel Company. These rear-engined vehicles saw service chiefly against the Japanese.

Constitution of the National Army in 1947

Shortly before the partition of India between India and Pakistan (East & West), four of the ten Gurkha regiments were transferred to the British Army, but the rest of the former army was divided between the two new nations. The Punjab Boundary Force which had a mixed composition was disbanded. The first test came immediately over a border dispute in Kashmir and was followed by the Invasion of Hyderabad in 1948, the Portuguese-Indian War of 1961, the Sino-Indian war of 1962, the Indo-Pakistani War of 1965, the Indo-Chinese conflict of 1967, the Naxalites uprising of 1971, the Indo-Pakistani War of 1971 (liberation of Bangladesh), the Siachen conflict in 1984, the Kargil war in 1999, Operation Blue Star and Operation Woodrose against Sikh extremism, counter-insurgency in Jammu and Kashmir and operations of peace keeping in Sri Lanka and elsewhere. Such long history of conflicts saw a fertile ground for building and cultivate tank warfare and tank design.

Indian Tankers had the occasion to show their skills at the Battle of Asal Uttar (8-10 September 1965), where they destroyed more than 100 tanks, mostly M47 Pattons, here gathered at Bhikhiwind, India, and "Patton Nagar".

Due to a shared past with the British Army, the organization and discipline of the Indian Army are closely modeled on this early model and still remains similar today. The Recruitment is based on voluntary service with a military conscription written in the Indian constitution but never imposed. In 2010 the army which is overwhelmingly professional had a strength of 1,129,900 active and 960,000 reserve personnel. Of the latter, 160,000 were in the Indian Territorial Army, but only 40,000 regularly report for duty. So by any means, this makes the Indian Army the world's largest standing volunteer army.

According to the Indian organization of the Indian infantry, regiments are to provide battalions and well-trained personnel to the field formations. The troops enlisted within the regiment are loyal and take pride in the regiment's traditions, often based on an old regional history and cultural specifics. Some Infantry regiments selection is indeed based on strict regional, ethnicity, or religion criteria (Assam, Jat Regiment, Sikh Regiments for example). From the Raj, Ladakh, Arunachal and Sikkim Scouts, are specialized in border defense were created after 1947. However, over the years and better mobility and urban development, the loyalty towards local regiments had tendencies to be rejected over loyalty over the union of India, contributing to create free Indian regiments like the Brigade of Guards and the Parachute Regiment.

At least until 1960 the bulk of Armoured Vehicles and tanks came from Great Britain. Early equipments included British Armoured cars like the Ferret (now discarded), and older ww2 British old stock models, but no modern tanks before the arrival of the Centurion Mark 7 main battle tanks in the early 1960s (which saw immediately combat against US-built Pakistani tanks). Centurions were gradually replaced by the Vijayanta MBT in the early to mid-1980s. The next Indian MBT was to be Vickers proposal of a simplified and lighter Centurion to be built in India under licence.

About 2,200 were built by the Heavy Vehicles Factory until 1986, gradually upgraded, but now placed into the reserve. Shortly after, the development of a new MBT started, known today as the Arjun. This development took thirty years, from 1974 until the first production tanks were out, in 2004. 248 are now in first line service, but only counts for a small portion of the bulk of the Armoured forces equipped after a change of policy with soviet origin tanks. Indeed, 800 T-55s were acquired in the 1960s, followed by PT-76 light tanks, BTR-50, 152, 60 and 80 APCs, BMD-1/2s, PRP-3, Czech OT-64 SKOT, Polish OT-62 TOPAS, BRDM-2s.

This first operation, high in the mountains bordering Pakistan, saw only ww2-era British-built armoured cars in action, which action was decisive. These were the armoured car cavalry units of the Hyderabad State Forces (Hyderabad lancers) equipped with Humber and Staghounds. The previous year, the Kahsmir war mostly seen infantry actions and few armoured vehicles involved.

War erupted after negotiations failed between Portugal and Indian for these small enclaves. Armoured Cars were involved in the fight to Goa, opposing the 1st EREC and the 9th Caçadores.

The war erupted over the control of neighbouring regions of the Aksai Chin and Arunachal Pradesh and the McMahon Line. The conflict saw freezing combat condition in high altitude, and few if no armoured vehicles were used due to the nature of the terrain. This was a comprehensive defeat in this infantry engagement, mostly because of the numerical superiority of the Chinese and poor defensive management. 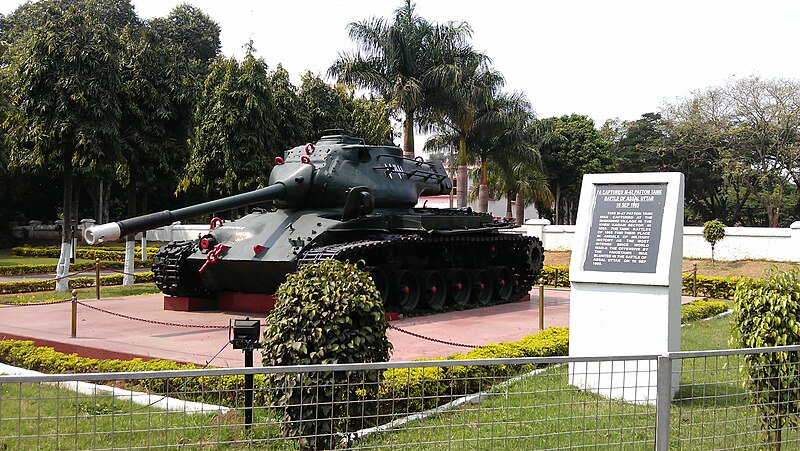 Pakistani M47 exhibited at Bangalore, memorial for the battle of Asal Uttar, which was with Chawinda, some of the greatest tank battles since ww2.

Fought in open plains and deserts, this serie of actions for the Jammu and Kashmir involved for the first time large scale tank actions over a wide area. Among others, the 1st Armoured Division was blunted at the Battle of Asal Uttar, and the Pakistani forces were comprehensively destroyed at the following Battle of Chawinda, followed by the second battle of Asal Uttar. On the Pakistani side, at Chawinda, 132 +150 in reserve Shermans and M47 Pattons took part in the action, opposed by 225 Sherman and Centurion Tanks on the Indian side. The knowledge gained in this war was instrumental in the design on the Vijayanta and in the development of new Pakistani tactics. The next round will be less one-sided.

A mere skirmish also known as the Chola incident started after some PLA elements infiltrated the Sikkim, an Indian protectorate. This was mostly an infantry fight, which left far more casualties on the Chinese side, which retreated and signed the peace to the condition that the Tibet Autonomous Region was recoignised as part of China. Indian troops celebrates on a captured M47 Patton at the battle of Basantar (Battle of Barapind) (4-11 december 1971) where the Pakistani forces lost some 46 tanks on the Western Sector.

Also known as the Bangladesh Liberation War this major conflict saw the end of the "Eastern Pakistan" which seeked independence. A local insurrection was brutally crushed by Pakistani Forces, until the end of 1971 when elements of the Indian Army intervened. The next move was a pre-emptive attack from the Pakistani Air Force that did not achieved all its objectives but secured a perfect alibi for India to declare war and engage its full divisions in the east. At the ensuring battle of Longewala, the Pakistani losses amounted to 138 armoured vehicles, including 38 tanks. At the battle of Basantar, 66 were lost and 40 captured. Dhaka was taken on 16 December 1971, along with 90,000 prisoners of war and followed by the Simla Agreement, the roots for the future state of Bangladesh.

Vijayanta Mark I with thermal sleeves. This 1st gen. MBT formed the bulk of the Indian Armoured divisions from 1966 until the late 1980s WZT-2 ARV. After Poland, Indian was the world's largest user of this Polish T-55 based vehicle. Older models such as the Vijayanta and T-54/55s still extant are stored in reserve, but budget-constraints means their storage condition is uncertain. About 2,200 Vijayanta of all versions had been produced, whereas 1811 T-54/55 has been ordered from various sources, and today around 450 modernized T-55s are in storage.

-In addition about 200 BTR-50 are also still in service, pending replacement by the Kestrel. An undisclosed number of OT-64/64 are also in service for reconnaissance. Indeed the tracked IFV Abhay should be complemented by the brand new wheeled 8x8 IFV Tata Kestrel. -For self-propelled guns, the most modern Indian assets are 150 K9 Thunder SPGs manufactured under licenced by Larsen & Toubro followed by 110 older 2S1 Gvodzika and about 80 FV433 Abbott, replaced by the current K9. -For AA vehicles, India still possesses about 70 ZSU-23-4M 'Shilka' SPAAGs (pending reserve), and 66 9K22 Tunguska, complemented by 250 9K35 Strela-10 SPAAML.