The Mark I had proved to be far from perfect on the battlefield. Attrition rate was enormous. The Mark II and III, both training machines, featured many modifications to the original Mk. I. This culminated with the final Mark IV, a joint product of William Tritton and Major Walter Gordon Wilson. Basically the Mark IV was a modified Mark I, taking into account all the war experience acquired on the front. The director of the Tank Supply Department, Albert Gerald Stern, was also instrumental in this process. He argued for the adoption of a new, more powerful engine and an improved transmission.


But this project was ambitious, and the deadline of 1 April 1917 was never attained. Instead, to speed up production, as many parts as possible were borrowed from the Mark I. The early production version was armed with three (male) up to five (female) compact, light and reliable Lewis machine-guns (later Hotchkiss Mk.I), mounted in sponsons and the front of the hull. However the Hotchkiss, although sturdier and more affordable, was criticized for its lack of magazine capacity (14 rounds compared to 96 for the Lewis). Later this issue was solved with a new flexible 50 rounds ammunition strip. The QF 6pdr (57 mm) guns on the male tanks were now short-barreled.

Another improvement was to carry a large fascine, made of brushwood bundle with chains, carried at the front. Later it was replaced by a chained unditching beam, reinforced with sheet metal, stored on two parallel rails running the entire length of the roof. This provided better trench crossing capabilities, and became a trademark of the Mark V. Another attempt was the tadpole tail, a large extension of the rear tracks horns. But rigidity quickly proved an issue on trials and it was apparently never mounted on operational tanks.

The main improvements were an increase of armor, up to 12 mm (0.47 in), and the relocation of the fuel tank. The later has enough room for 265 l (70 gallons), for an operational range of 56 km (35 mi). The Mark IV was propelled by the Daimler-Foster, 6-cylinder in-line sleeve valve petrol engine, which developed 105 bhp at 1,000 rpm, allowing a speed of 6.4 km/h (4 mph). Transmission had 2 forward and 1 reverse primary gears and 2 speed secondary gears. It was still relatively complex for the driver, but an improvement over the previous models.

Due to the urgent need for tanks the production of the Mark IV was dispatched to Metropolitan, Fosters of Lincoln, Armstrong-Whitworth, Coventry Ordnance Works, William Beardmore & Co and Mirrlees, Watson & Co. An initial order of 1000 tanks was issued by the War Office in August 1917. The last were delivered after the armistice in November 1918. They had been converted to armored tank tenders (205 in all). Standard production was 420 "male" and 595 "female". Normal weight, in battle order, was 28,4 tons (male) and 27,4 tons (female). Ammunition provision for the males consisted of 180 HE rounds. Unit cost was about about £5,000.

Two variants of the design appeared. One equipped with a "tadpole tail", never to be used on the battlefield. The other was the mass-produced tank tender, which was identical to the regular female but unarmed. They carried gasoline and ammunition.

The Mark IV in Action

First blood for the Mark IV came on June, 7, 1917, with the attack of Messine Ridge. The terrain was very rugged, heavily cratered, but cold and dry, which allowed some sixty plus tanks some success, although lagging behind the infantry. Later during the third battle of Ypres (31 July), most of the Mark IVs committed literally sank in the mud. The power to weight ratio was such that in a heavily cratered terrain and swampy ground, the Mark IVs frequently bogged down and the overheating and overused engines usually broke down in the process of bailing out. Most fell prey to German artillery or were captured afterwards. Their contribution was insignificant. However in November 1917, at Cambrai, a big concentration of Mark IV\'s (460) proved decisive despite a complicated and well-defended trench system.

During the German spring offensive, British officers discovered in surprise some German assault troops were accompanied by captured Mark I and IV. These "Beutepanzers" sightings rose so often that encounters with the German-built A7V were rare in comparison. This led the War Office to order the modification of the armament of some Mark Vs into "hermaphrodites", fitted with guns and machine-gun sponsons. However, the first tank-to-tank duel involved one of these German A7V during the second battle of Villers-Betonneux, in April 1918. Two British Mark IV female and one male spotted and engaged the A7V. But after several miss-hits, the two Female, useless, retired. After many shots and two hits, both tanks retired in a draw.

When the Mark V, better protected, with a better engine and greater speed came into service, the production of the Mark IV was phased out and the last converted as supply tanks. No Mark IV seemed to have been sent to the Whites in Russia. However a few Beutepanzer Mark IV took part in the revolutionary events in 1919, on the armies side.

Seven Mark IV has survived. The Female "Flirt II", exposed at Museum of Lincolnshire Life, and another at Ashford (Kent). One male, "Lodestar III" is homed in Belgium, at the Royal Museum of the Army in Brussels, another, a female "Grit" is on display at the Australian War Memorial. The "Deborah", a female, was excavated at the village of Flesquières in France. It is now been restored, posibly for display at Saumur. A former war bond tank, the "Liberty" is under restoration at the United States Army Ordnance Museum, Aberdeen, Maryland, after decades of decay. A male, the "Excellent", which became later HMS Excellent, for a Royal Navy shore establishment training camp, and later kept fully functional for the Home Guard in 1940. It is now the host of Bovington tanks museum and the only one in the world in running condition. 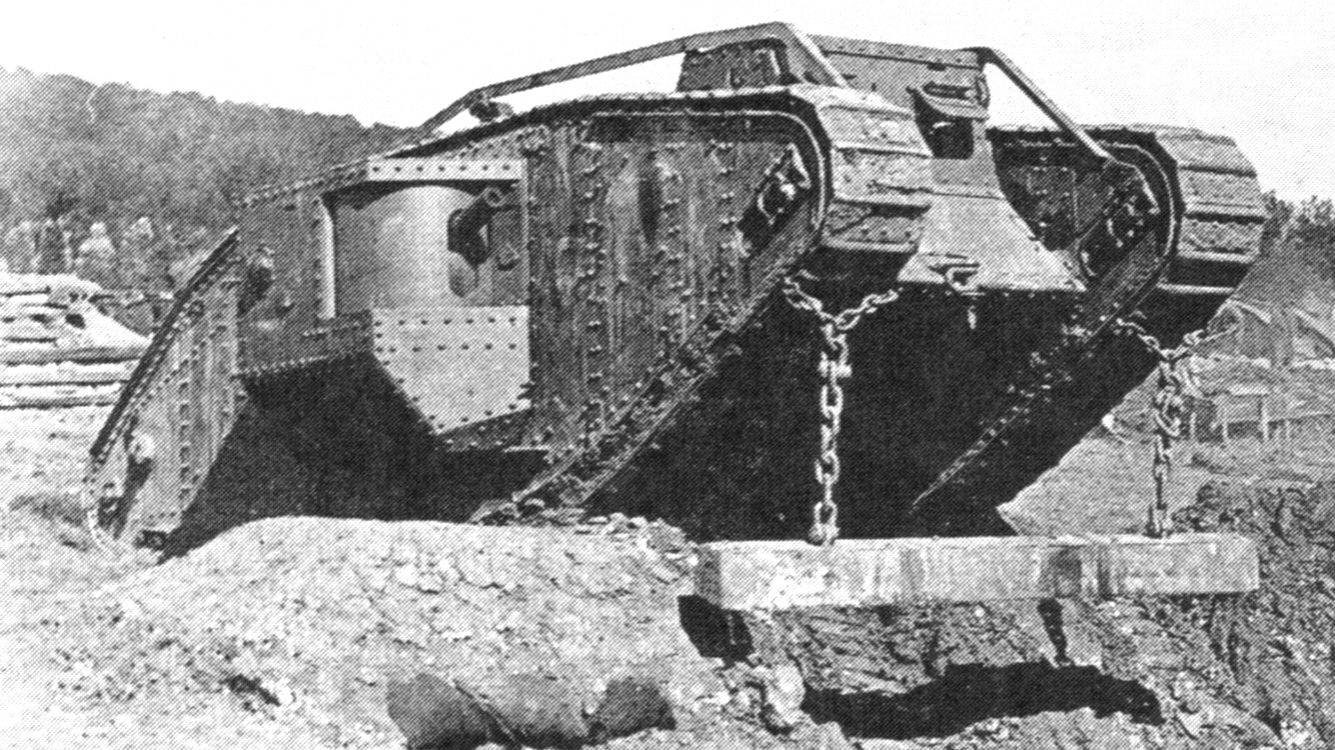 A Mark IV showing the proper use of the unditching beam. Before that, an early solution was the use of a wide (3.5 m/11.48 ft wide) fascine. 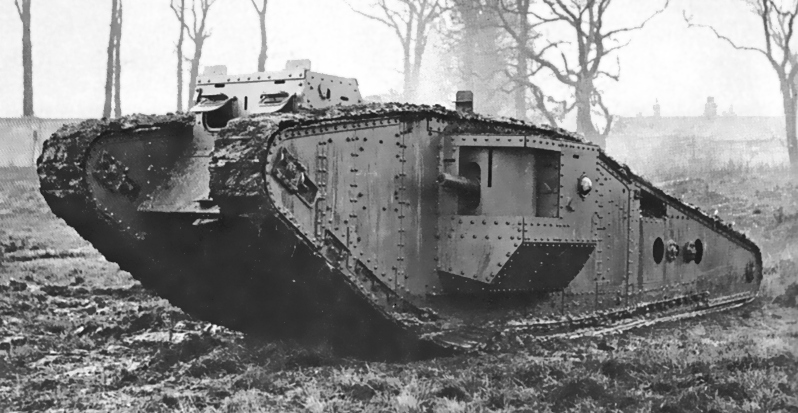 One of the few Mark IV experimentally fitted with a "tadpole tail", to help with the crossing of large trenches, like those of the Hindenburg line. This added part never shown enough sturdiness and production never materialized. The idea of a longer hull was realized by the Mark V*, a variant of the former, at the end of the war. 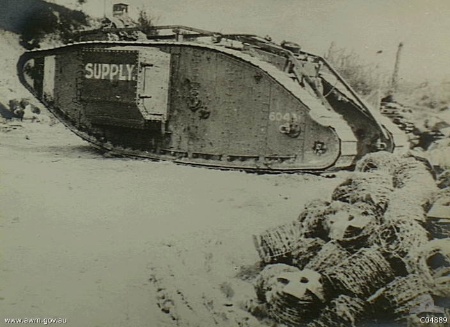 A Mark IV converted as supply tank, in 1918, at Villers-Bretonneux. 220 of these were built or converted on the stocks when the Mark V came to replace older models. 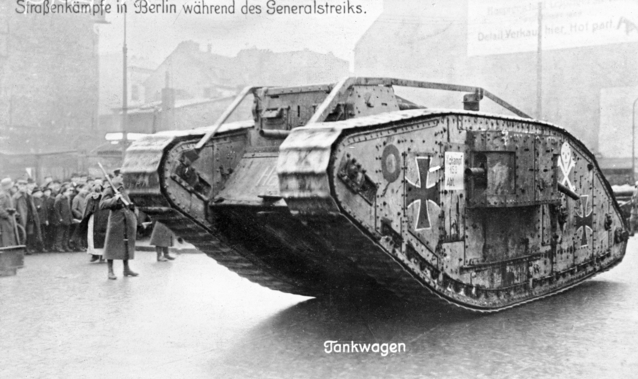 A captured Mark IV in Berlin, during the military repression of the Spartacus league, within the German revolution, 1919. Nearly forty Mk. IV were captured during the course of the war, and pressed in service as "Beutepanzer Wagen" by the Germans, with big Malta crosses to prevent friendly fire. In some case, British armament was replaced by German guns and machine-guns, and the crew boosted to twelve.

Mk.IV Female, equipped with Lewis machine-guns, Ypres, July 1917. Trench crossing capabilities were relatively good due to the very large rhomboid tracks, but the power-to-weight ratio was so feeble that big slopes and deep craters proved impassable, and various solutions were tested. Among them a pair of very large arms (attached to the front), each fitted with a roller and a long "tadpole tail" at the rear, but both solutions proved costly and unpractical. A simpler idea proved successful: a pair of parallel rails, running over the roof, sustaining a very large fascine or an unditching beam. The fascine were also used to assault the antitank trenches of the Hindenburg line.

Mk.IV female, equipped with five Hotchkiss Mk.I machine-guns and fitted with a large grenade deflector (large frame with iron wiring). This feature was adopted because the roof armor was not thick enough to hold against grenade fragments and mortar shrapnel. It was also useful in urban combat.

Mark IV Male "Kelly's Heroes", Palestinian campaign, battle of Megiddo, 21 September 1918. Around 200 Mark IV were sent by order of General Allenby to this sector to help the breaking through the Turkish lines towards Jordan. As the conditions in the desert were largely different than those in Europe, the rail and unditching beam were dismounted. The flat ground allowed better speed, but because of the scorching heat the engine overheated and crew comfort suffered.

The supply tank Mk.IV "Auld Reekie", somewhere on the Belgian front, October 1918. Many Mark IVs, now considered obsolete, were converted to supply tanks, having their armament removed and apertures closed. Others were factory built, for a total of around 205 such units.

A Beutepanzer Wagen IV (b). During the summer offensive the Germans recaptured 40 Mark IV tanks, formerly disabled, ditched or broken down in no-man's land. They were quickly modified, camouflaged, sometimes rearmed, and pressed back into service, with a crew of 12. However the lack of ammunition and spare parts proved an issue.