With the planned invasion of Europe on D-Day, the US ordnance saw the need for towing heavy artillery while offering some protection in combat. The initial tractors developed were improvized, based on the M31 and M32, which were ARV (recovery) derivatives of standard M3 Lee and M4 Sherman respectively. The conversion was fast, consisting in removing their turrets and winches. The result were the M33 and M34 prime mover respectively. As explained by the US identification booklet from the Ordnance the M33 and M34 declared "substitute standard" (meaning no longer front line or obsolete vehicles) diverged by their construction and some minor points. Both were however designed to carry the 240 mm Howiter and 8-inches gun and expedients while the High Speed Tractor M6 was produced in large quantities. Based on the OCM 23183 and OCM 23571, the M33 (Based on the M31 ARV, deroved from the M3 lee Medium Tank) had a riveted hull, turret, turret ring and boom assembly removed, as well as the .30 cal. Browning M1919A4 ball and turret mounted MG as well as the tripod mount. An air compressor and rear outlet lines were added for brakes on the towed trailer, and electric outlet for stop, and tail lights for the towed load. The M33 was armed with a .50 cal. Browning M1920 for AA defense and canvas covers for the openings, the main turret ring and left cupola ring.

US ordnance identification photo for the M35

The "Fully Tracked Prime Mover M34" was based on the M32B2 ARV and therefore had a cast hull. Were removed the 81 mm mortar and mount, cal.50, Cal.30 and tripod mount, the boom assembly and miscellaneous stowage and equipments. Like the M32, an air compressor was added, and lines for breaking operations with towed loads, outlets fore and aft, electric outlets for stop and tail lights and associated stowage.

By January and June 1944, the M10 Wolverine was being phased out as a tank hunter, some used for training, and some 209 M10A1s used for that purpose were taken over to be converted into prime movers, also by removing the open turret and internal ammunition storage and specific fittings to the M10. The result became the M35 Prime Mover. The M35 was used primarily to tow the 8 inches GUN M1 or the 240mm Howtizer M1, which were quite different ordnance pieces with specific towing cradles. As defined by the same ordnance documents as above, the M35 was defined as "A modification of the M10A1 with a welded hull. The turret, including the 3-in gun M7, and cal.50 machine gun, and the cal. 50 tripod mount were removed as was the rear pintle, the pioneer compass, and miscellaneous stowage items. An air compressor unit and lines, with outlets front and rear, were added. Pintle assemblies, similar to those of the M32 Tank Recovery Vehicles M32 series, were supplied at the front and rear. Four seats were installed in the crew compartment. An electric outlet for the towed load stop and tail lights and various stowage items were added." This summup pretty well the amount of modifications done. It is not precised there if canvas were procured to cover the main turret ring opening, but it was quite likely, and if not, was procured or take over in the field, as these vehicle mostly served in Northern Europe in the winter 1944-45. Photos shows the stadard M10A1 stowage railings were kept, notably to store fuel jerrycans, and fixed cradles for spare roadwheels on either side, plus numerous bags and haversacks for the crews, tooling and spares. These vehicles were not armed, but personal small arms of the crew. It was not a concern as these were deployed in principle always far from the front line: The 240 mm Howiter M1 had a range of 14.3 mi (23.1 km) and the 8 inches gun M1, 20.24 mi (32.57 km). The M35 weighted less than the M10 at 25 tons, and was fitted with a hook forward and heavy duty towing hook aft. It had a crew of six, including the gun servants and gunnery officer (2 loaders, a gunner), and a driver. Four can be seated on the four seats installed at the bottom of the vehicle, the gunner/commander taking place on the cabin versions in the ring structure.

However there were later modifications, notably the addition of a welded "tower", welded around the turret ring for added protection of the crew and the weather. The back was open for easier access, with extensions at the top for canvas, and the front had four windows. There was a well structure for a gunner standing at the top of the structure, which manned a .50 caliber M2HB M1920 heavy machine gun for AA and ground defense. In internal space created by the structure gave extra stowage space for what needed to be stay dry. When the canvas roof was extended, oan opening was practice to let the gunner's ring mount emerge. The canvas could be completely unfolded and strapped aft, enclosing the crew inside, quite useful, in particular in winter. The "cabin" had rounded upper edges connected to the open roof. There was a variant with a welded all-metal roof and with two windows instead of four at the front as well. The roof was welded just at the limit of the turret ring so to allow hatches for the former bow gunner and driver to be opened. There was another version "fully enclosed", with full roof, angular, and a panel welded at the rear with a single canvas as a door in the opening. The cal.50 ring was at the front, closed by a hatch. This was the best version identified so far. 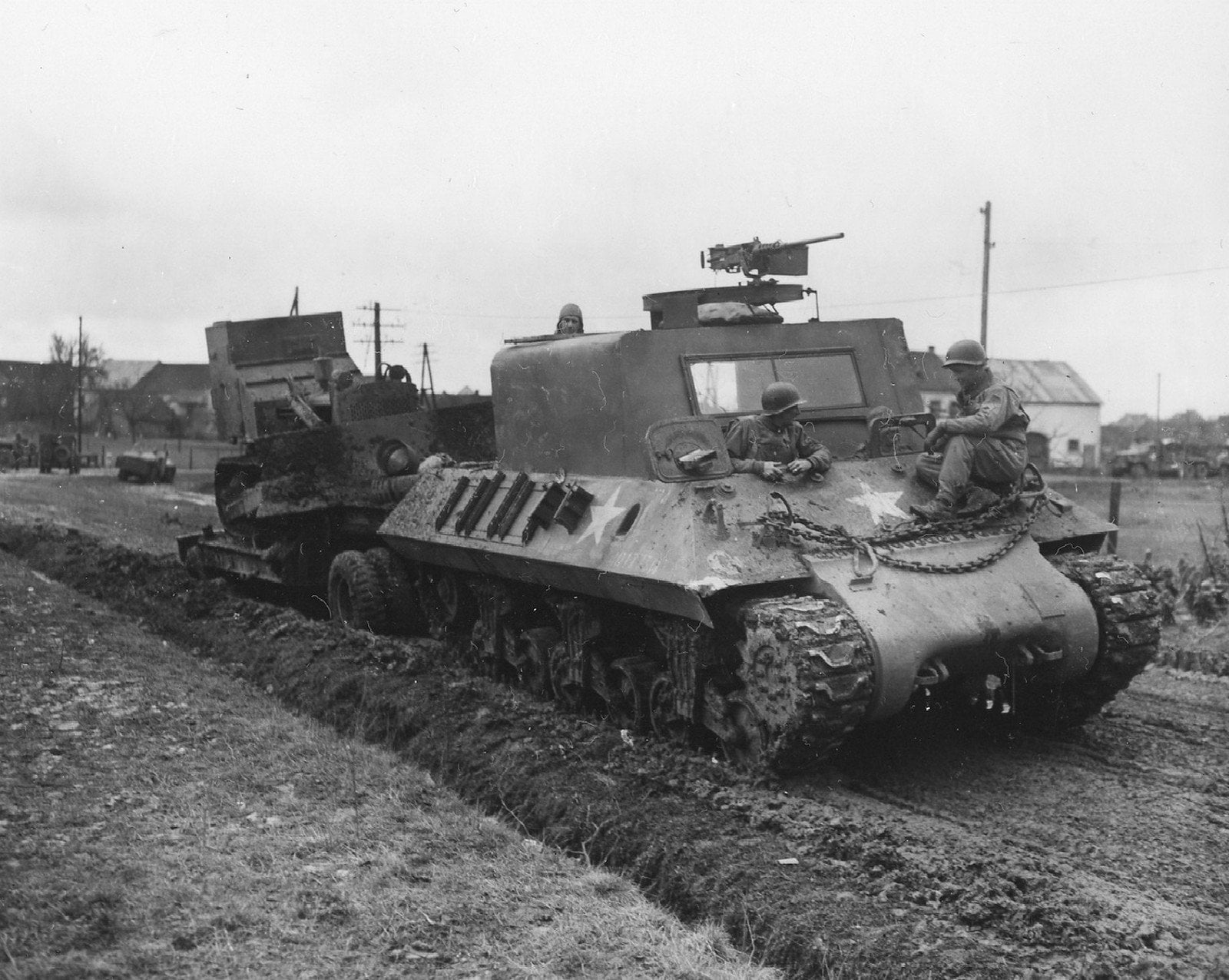 The M35 was converted to around 300 vehicles (sources are diverging), affected to mobile long range artillery units of the US Army. It was only used by the latter, not by the allies, which occasionally modified turreless tanks for towing artillery, a bit like the Kangaroo conversions. There is no indication they were used by the Free French either, but they were deployed until the end of the war, replaced by the M6 and M7 High speed tractors. One precise example user was the US 35th Infantry "Santa fe" Division which organic 127th field artillery batallion used the M35 during the siege of Nancy in the fall of 1944 and the campaign or Lorraine (NE France) from september 1944.

M35 PM in September 1944 with the Seventh Army along the Rhône valley in the south of France, following Operaton Anvil Dragoon, fully equipped.

M35 PM with a partial cabin, open back and tarpaulin. 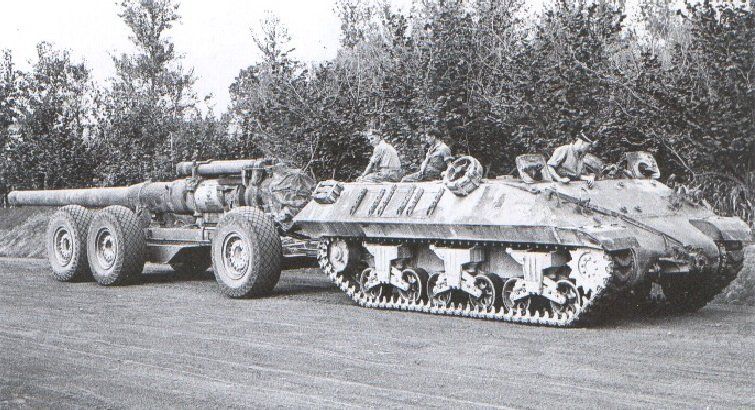 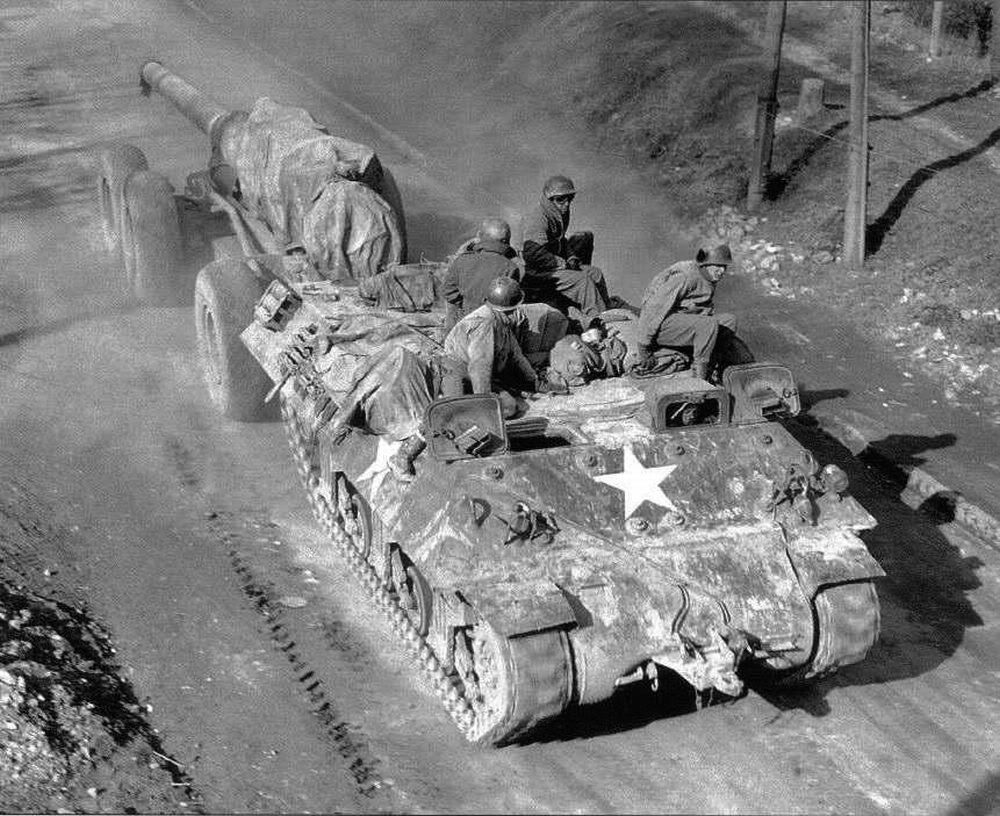