In 1939 Vickers designed an amphibious light tank based in their Mk.IV light tank to help the Army establish a bridgehead on the other side of a river when the normal crossing point had been blown up by the enemy. It would give covering fire for the engineers who were repairing the bridge or building an new pontoon bridge. During World War one large areas of North West Europe had been flooded as a defensive measure especially in Belgium. Vickers also realised that any future war in Europe would have to over come the problem of armies crossing rivers, canals and lakes. Their amphibious light tank was a solution to this problem. 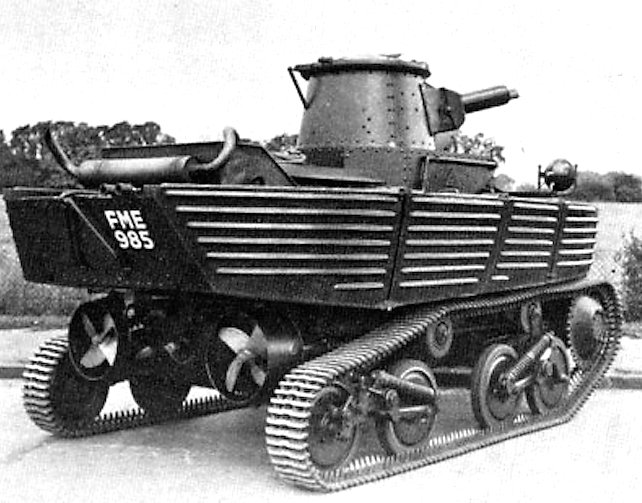 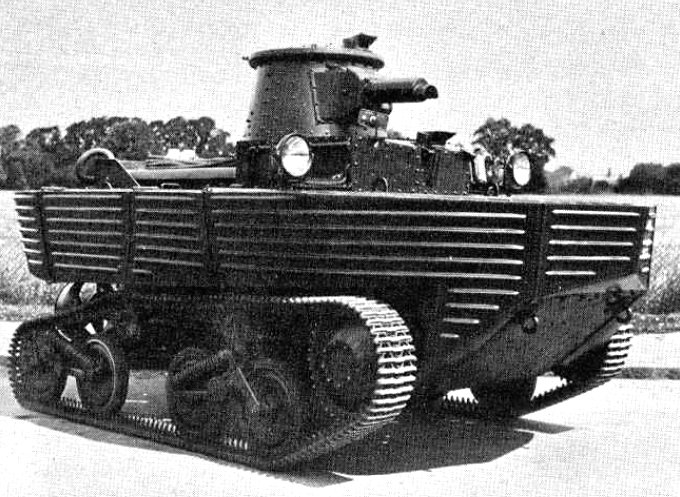 This Vickers Amphibious Light Tank had a maximum road speed of 35 mph (56 km/h)and a maximum speed in the water of 5 mph (8 km/h)
This amphibious tank design was revolutionary at the time. They had turned a tank into a boat. Because of the very nature of a tank, being very heavy because of the protective armour, they do not do very well in water. The running track was the standard Vickers Light tank MkIV configuration. This consisted of two Hortsmann spring suspension (in quad scissors) front drive sprockets and no idlers. Vickers had decided to abandon the guide wheels and supporting rollers of previous versions of their light tank. Such a move gave several advantages. It reduced the length of the tank, increased seat track mover and facilitated construction of the chassis as a whole. The only serious shortcoming observed later was somewhat poorer mobility, compared with earlier versions

This Vickers design was never adopted. The tank was tested briefly at the start of the war, spent the next four or five years in reserve and was then subjected to more tests after the war, by which time it was completely out of date. Vickers-Armstrongs built two earlier amphibious light tanks between the wars: the L1E1 and the L1E2. They enjoyed some modest export success, notably in Russia where it was copied. 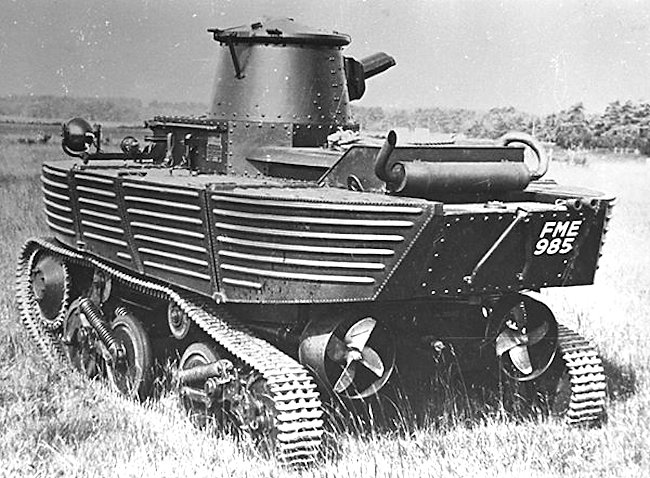 For some time the Vickers Amphibious Light Tank A4E3 (L1E3) at the Tank Museum Bovington had been exhibited in the ‘Inter War Hall’ but recently it has been moved to the large Vehicle Conservation hall where it is awaiting its turn for a make-over tank overhaul.
If you look at the wheels on the surviving exhibit and compare it with original photographs of the 1930’s you will notice that the track wheels are different. They were damaged and exact spare parts could not be found. Replacement wheels from a variety of different tanks have been used. The original ones were hollow to assist with buoyancy.
One of the major downsides to this amphibious ‘tank’ is that it was not bullet proof (although the one at the Tank museum has been built using soft steel) and the Kapok used in the flotation devices is highly flammable. That means you have an armored vehicle that was prone to being shot up by machine guns, bursting into flames and then sinking all at the same time. No wonder it did not enter production. 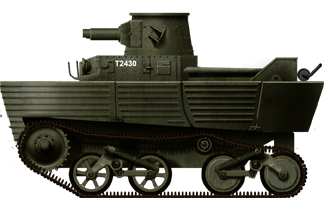 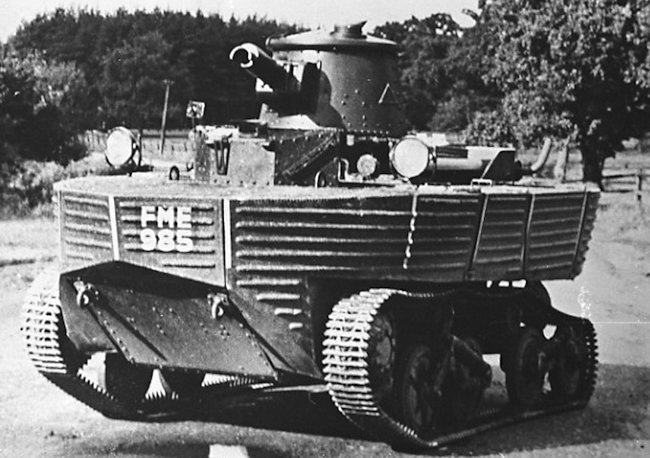 The driver sat in the front of the tank in the middle and his head was protected by an armoured box that jutted above the floats. It was fitted with a periscope so he could still see when his hatch was buttoned down in battlefield situations. 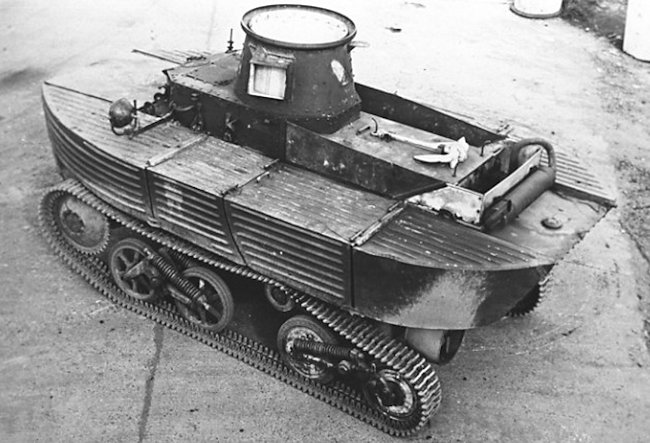 The tank’s hull shape, with the attached floats, was very boat like. 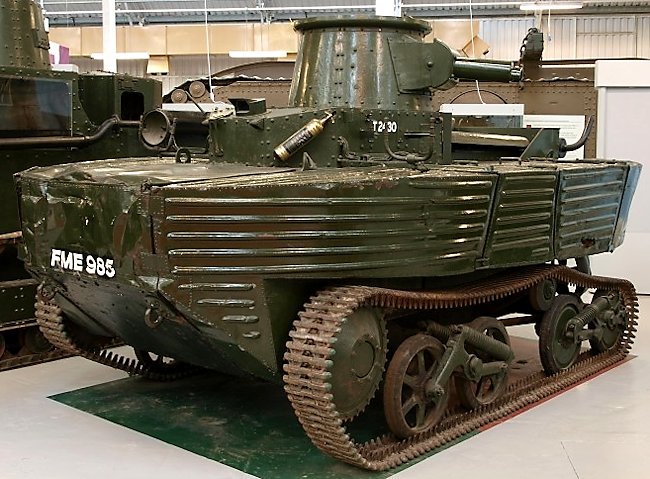 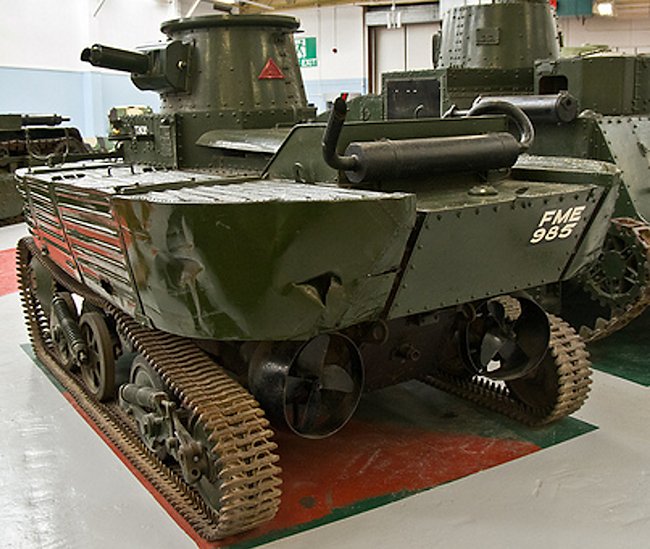 The Vickers Amphibious Light Tank A4E3 was powered by two propellers at the back of the vehicle when in the water. Earlier versions only had one propeller. 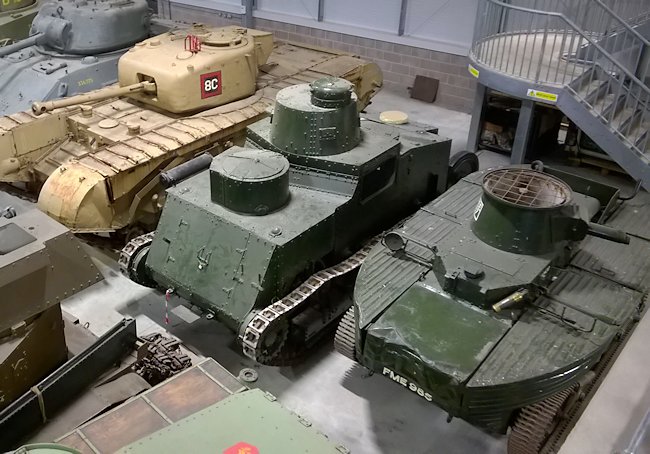 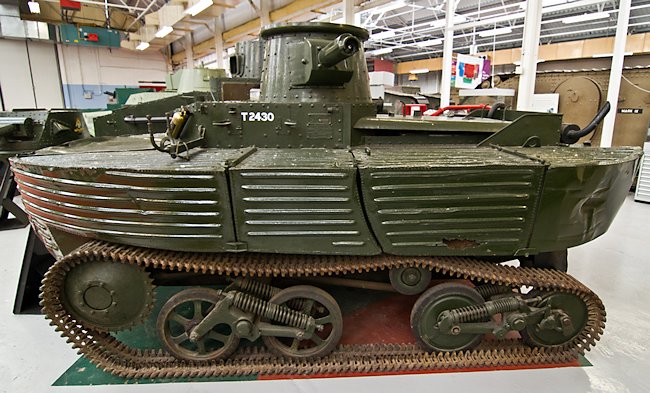 A modular approach was taken when designing the floats. Each side had four aluminium box like compartments.