From the days of the Mercury space program, the means of evacuating astronauts from a burning or otherwise compromised rocket vexed the National Aeronautics and Space Administration, better known just as ‘NASA’. The problem was to get the astronauts from the rocket and to safety as fast as possible. The standard means chosen was to use a zip-line to get the astronauts from the rocket (or later from the shuttle) to a concrete bunker from where they would be driven to a safe distance.
The nature of the contingency being unique meant a unique solution was required which came in the form of the M113 Armored Personnel Carrier (APC). An armored vehicle would allow rescue crews to get to and from the scene and evacuate astronauts safety regardless of falling debris. At least 4 M113 vehicles were obtained. In 2013, upon the announcement of their retirement, it was confirmed that the 4 new vehicles had been obtained to replace the M113’s. This suggests that just the 4 M113’s had been used by NASA at the Kennedy Space Center, Cape Canaveral, Florida. 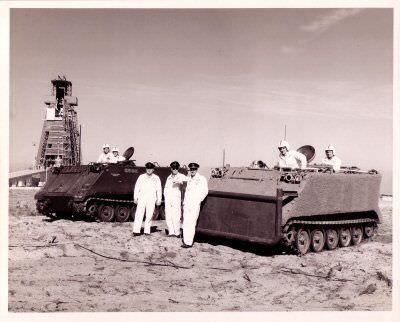 Two early M113 NASA Armored Rescue vehicles. The one nearest the camera has a rectangular shield at the front and is coated with what is believed to be heat resistant asbestos based paste. Photo: ‘Alacrity’ at AR15.com 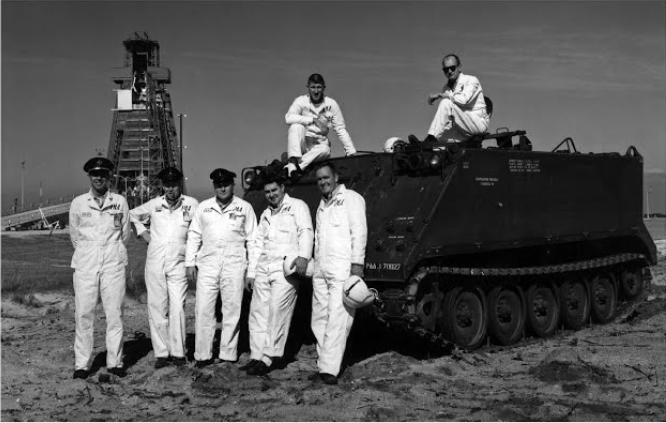 There is some information suggesting that early work with the M113’s involved the use of asbestos added to the exterior either as a paste or as panels bolted on with the intention of protection from the potentially intense heat and flames which might be faced by such as a rescue operation. Photographic evidence of these early vehicles merely shows initially no numbers and at least one vehicle with some kind of coating (see above) and a large rectangular shield at the front. The color of the vehicle is not known and later they can be seen in a dark color but with large numbers painted on the front and sides (and presumably the rear). 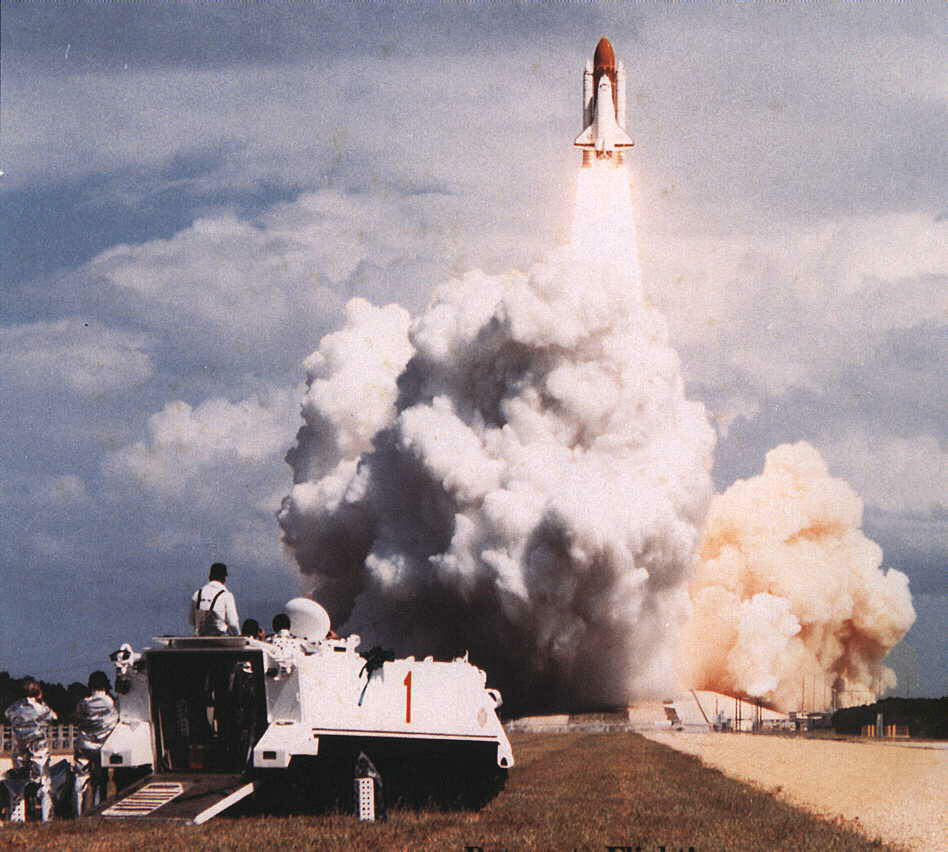 NASA M113 Vehicle No.1 during shuttle launch showing the all-white colour but with the ramp open. Photo: NASA
Vehicles 1 and 3 noticeably had a large cab type structure added to the roof over the commander’s hatch at the time. Later photos from the 1970’s show the vehicles painted in a white color with large red numbers. Photos taken in 2014/2015 when the vehicles were being retired showed a more common firefighting luminous-green color with a horizontal reflective stripe and red numbers. 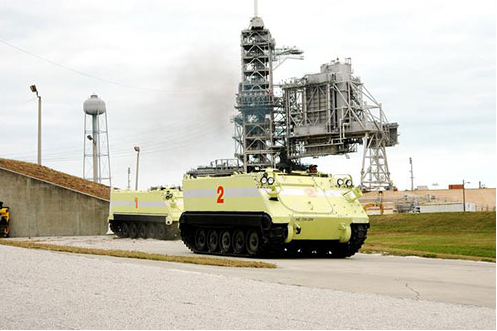 The procedure for using these vehicles at the time of their retirement was that Vehicles 1 and 2 remained on standby at a secure location less than one mile (9/10th of a mile) from the launch site. A third vehicle was kept available, open and uncrewed next to the astronaut’s evacuation bunker. Vehicles 1 and 2 were crewed during launch time with a crew of fully equipped firefighters in silver firefighting suits with self-contained breathing apparatus on. 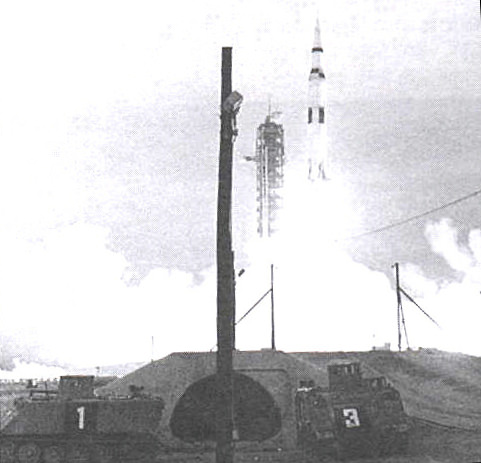 NASA M113’s Vehicles No.1 and No.3 by the evacuation bunker during launch. Photo: capcomespace.com
Immediately prior to launch, the fully equipped firefighting crew cram into the vehicle while the driver remained outside. He would enter the vehicle at the time of the emergency call. The rear ramp on the M113 would be raised and it would set off on its rescue mission. The reason for this is to do with air supply. Once sealed, the crew of Vehicles 1 and 2 have just 10 minutes to get from their starting point to the launch site, effect a rescue, reenter the vehicle and then get away. 10 minutes is not long at all especially considering the inferno which probably awaits them and the crews train tirelessly to hone their response times because seconds matter. Vehicle 3 sat at the reception point for astronauts by their bunker with the rear ramp open to expedite the astronauts’ evacuation via the slide wire baskets into the bunker. Because Vehicle 3 was a self-evacuation vehicle, all astronauts were trained to operate it.

NASA M113 Vehicle No.2 seen during training as firefighters enter, and a view of the interior of one of the vehicles showing the cramped interior when closed up. Photos: NASA
Photographic evidence shows that over the decades the exact positioning and response for the vehicles had evolved but the essential requirement was the same, evacuating the astronauts in the event of a launch disaster.

As of December 2013, the old M113’s were replaced by a more modern alternative, surplus Caiman Mine Resistant Ambush Protected (MRAP) trucks. The M113’s were never used in a real-life rescue. The MRAPs are faster and more spacious than the M113 and just as well protected. The only modification to the Caiman, other than being painted white, is the planned addition of a rear ramp replacing the original steps. However, as of 2015, the Caiman vehicles seen at NASA retained the rear steps and doors. Just like the M113’s, 4 Caimans now fulfill the rescue role for NASA. The status of the M113’s is unknown although Vehicle No.1 can now be seen on a concrete platform outside Kennedy Space Center as a display.

MRAP with rubber tire??? Will be ridiculous in a fire environment! IMO.