The M113, as one of the most widely produced military vehicles ever in use, saw a variety of roles and experiments for a multitude of military and non-military purposes. Following the 1990-1991 Gulf War, one of the lessons which had been learned was the lack of equipment to deal with large hydrocarbon fires. This included not just the Kuwaiti oil wells, but also the Iraqi use of oil-filled ditches. Set ablaze, these ditches would prevent bridging by Allied forces and also cause significant problems with visibility. There was, therefore, a significant military hurdle which required a solution, a tracked protected fire-fighting vehicle. One able to put out or suppress the burning ditch long enough for Allied forces to cross whilst at the same time being protected against enemy fire.
This project was to evaluate whether it was possible to repurpose an armored vehicle for this role and the obvious choice was the M113A2. The US Army’s Tank Automotive Command (TACOM) directed that experiments should be made for the conversion of the M113A2 Armoured Personnel Carrier (APC) into a specialized firefighting vehicle. NASA had already been using the M113 as a fire protected vehicle for astronaut evacuation for years, but it had no firefighting equipment added. This vehicle would simply make use of the cargo space inside the M113 to carry an apparatus in the hope of finding a quick solution to fight a burning oil-ditch fire. 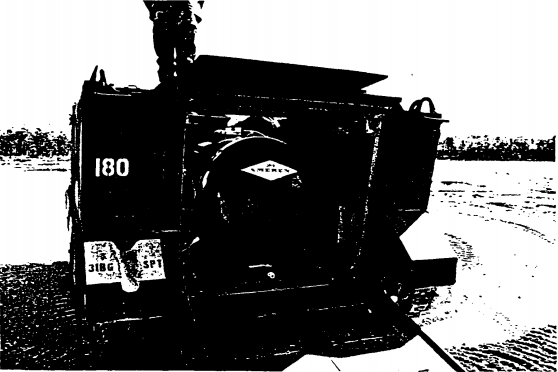 M113A2 used for trials with the fire-fighting equipment fitted in the rear. Photo: USAF ESC

Work on the project was conducted by Applied Research Associates of New Mexico. A standard M113A2 fitted with an Amrex Corporation fire suppression system was modified to carry an internal skid-mounted tank. This tank, welded to the skid, held 250 US gallons (946 litres) of mixed water/fire suppressant and operated at between 200 and 240 psig (pounds per square inch – gauge). The tank system was very simple and could be quickly refilled by means of a 4” (101.6mm) filler cap on the top of it. The water used for the tests was salt-water. This is because this was the anticipated type of water expected to be sourced in a real-world application and was shipped to the test site by means of tank-truck for the trials.
This liquid mix was propelled by means of two 220 cubic foot (6.23 m³) nitrogen or compressed air cylinders operating at 2,000 psig, which would deliver 150 to 200 gallons per minute. With a tank of just 250 gallons this meant, at most, just under 2 minutes of fire-fighting time.
The work which had to be done to the M113A2 for the fitting of this equipment was relatively minor but started with the removal of the personnel heater system in the back and the commander’s seat. The decking, which was held in place by six large washered bolts, was removed, as was the antenna cover. In place of the antenna cover, the fire monitor itself was installed. The skid-mounted system was then installed in the rear by means of a fork-lift truck and bolted to the floor plate of the vehicle. Complete and ready to go, this whole system added 3,300 pounds (1,497 kg) to the weight of the vehicle; empty it weighed just 1,220 pounds (553 kg). A minor further modification was undertaken during trials. On 12th February 1991, the 40” (101.6 cm) long 2” (5.8 cm) diameter straight pipe nozzle on the monitor was replaced with a Task Force Tip F200 nozzle. 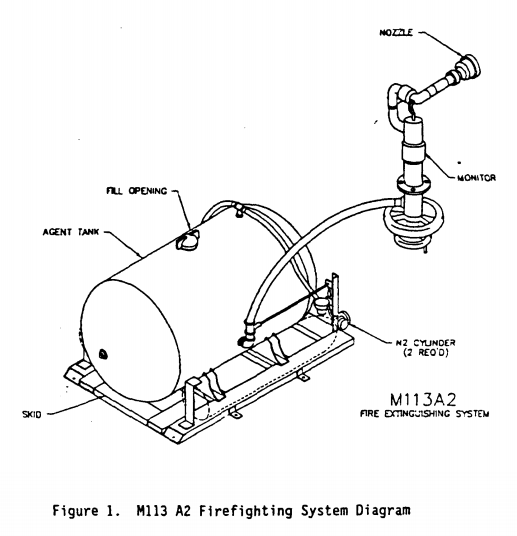 It is obviously a poor idea to have a crew member exposed from the vehicle fighting a fire and even more so when possibly facing enemy action at the same time, so the vehicle was fitted with Closed Circuit Television cameras (CCTV) to aid the crew. As a result, the crew of the M113A2 could use the monitor to disperse the water and fire-suppressant safe from within the armor of the vehicle. They could guide the nozzle delivery in elevation and in rotation by means of controls inside the vehicle. Those controls, were, however, a little too complicated for easy use, so it was suggested that they should be replaced with a simple lever system instead. This system would be easier to operate and maintain the existing 160 degrees of horizontal movement and -15 to +45 degrees of vertical movement which were felt to be adequate for the vehicle.
Different suppressants were tested including Pryrocap B-136, Hurri-Safe, Powdered Viscous Foam, Aqueous Film Forming Foam (AFFF) foam (MIL-F-24835C), Phirex, and Acu-Lite-F. Replacement of the propellant cylinders and refilling with water and fire-suppressant took just 7 – 10 minutes.

Once modifications had been made, the vehicles needed to be evaluated and this was carried out with the assistance of the US Air Force’s Engineering Service Center by their Fire Protection and Crash Rescue Research Branch at Tyndall Air Force Base, Florida. These tests were carried out between the 12th and 22nd February 1992. 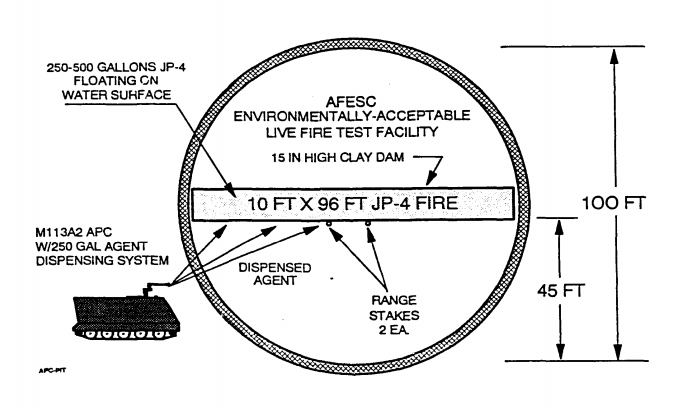 Set up of test arrangements at Tyndall Air Force Base. Source: USAF ESC
To test the effectiveness of the platform as a firefighter, six different fire suppression agents were tested to evaluate the time it would take to extinguish the fire and burnback time. Further, the testing would evaluate the possible range of the apparatus and issues relating to servicing and replenishment.
The burning ditch anticipated to be crossed for any assault, such as was conducted against Iraqi forces, was modelled to be 10 feet wide (3 m) wide, 10 feet deep (3 m). For the test, a trench 96 feet (29 m) long was cut and fitted with a 15 inch (38 cm) high clay berm. The ditch was then partially filled with water and into it were poured between 250 and 500 US gallons (946 – 1893 litres) of JP-4 fuel. Testing would begin with the 250 gallons and then work up to the 500 gallons amount. Set on fire, this fuel, floating on the water, was considered an adequate simulation of the type of large hydrocarbon fires expected in the forthcoming campaign. During the 1990-1991 Gulf War, the Iraqis had dug ditches just like this, 3m wide and up to a mile long in places.
The vehicle was not expected to put the whole fire out, instead, it was being tested for its ability to extinguish an assault lane 10-15 feet (3 – 4.6 m) wide. The suppressant would then have to sit on top of the JP-4 without allowing it to reignite. The time taken for this to happen was one of the main test criteria. The longer it could suppress the flames the better, as it allowed more troops to cross the obstacle behind the M113A2. Five to six minutes was considered optimal for this ‘burnback’ time.
It was calculated that the 250 gallon tanks of the vehicle were sufficient to suppress a fire lane 10 feet (3 m) wide and up to 100 feet (30.5 m) long but the range from the monitor was just 70 – 80 feet (21 – 24 m) under ideal conditions with the wind behind it; it would be substantially less into the wind. 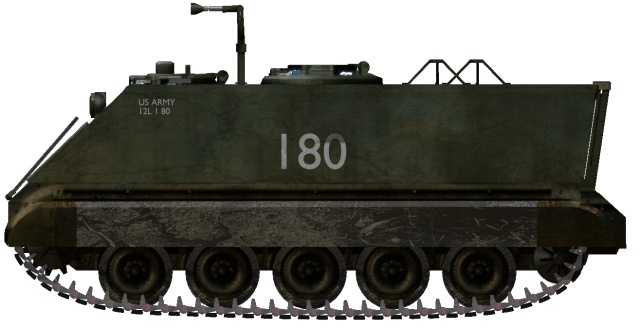 Illustration of the M113A2 Firefighting Vehicle by William ‘Richtor’ Byrd, funded by our patreon Campaign.

The short range, just 24 metres, was a problem, as was the short duration of firefighting time, at less than 2 minutes. With a suppressant time of just 6 minutes at best and a refill time of 7 minutes also at best, the system was effectively unable to provide continual fire-suppression on the assault lane with anything other than the AFF which completely prevented burnback in some circumstances and no faster than 6.6 ft./min. (2 m/min). On a good day, it took no more than 20 seconds to extinguish the fire as required, meaning the system could deliver up to 5 or so operations on a single fill, assuming everything went to plan of course.
Fitted with CCTV cameras it was advantageous for the crew to operate the vehicle sealed within, especially given the likelihood of having to conduct operation under enemy fire. Without the CCTV cameras in use, the monitor-operator had to rely upon the periscopes for visibility in these first tests and, as such, they were unable to adequately direct the stream. Somewhat inextricable, rather than using the CCTV cameras for further tests, the monitor-operator was to don a fire-protective suit and operate the monitor from an open hatch which meant he had to expose his entire upper body. Done like this, the tests were successful and this was to be the recommended means of application regardless of the hazard to the exposed operator. 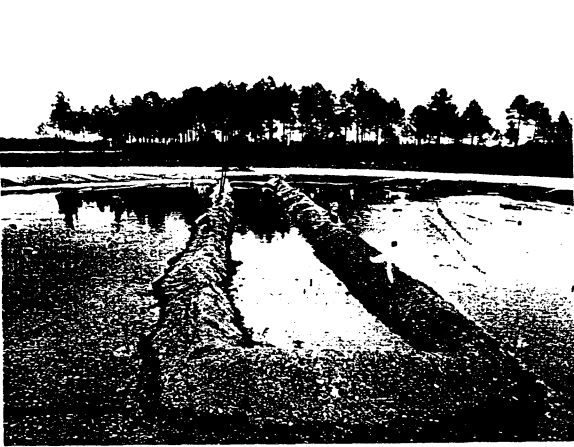 Set up of the clay berm around the burn pit. Source: USAF ESC

During these tests, a standard P-19 Firefighting vehicle, which was an unarmored vehicle fitted with a prototype armored body kit conforming to STANAG 2929, was often used to extinguish the fires, including the first tests where the crews had been unable to get any suppressant delivered. Through their 460 US gallon (1,741 litre) per minute, the P-19 extinguished the entire fire within 10-15 seconds and with that kit also provided a small amount of ballistic protection for the occupants too.

AFFF (6% mix) was found to be the most successful firefighting agent and the M113A2 had shown itself to be a capable platform for mounting the equipment and for fighting this type of fire. It was also the cheapest, at just US$75 a gallon/tankfull (1992 dollars), the equivalent of US$134.71 (2018 dollars).
Not only was the M113A2 seen as being suitable for this military firefighting assault vehicle role, but also for a variety of crash rescue and even civilian disaster needs too. The P-19 vehicle though was also protected from small arms like the M113, but already had a purpose designed and built firefighting apparatus which was far more capable. As it was, this M113A2 experiment was successful, but not adopted. The vehicle was presumably turned back into its original state following the tests.

Although not related to the vehicles, one final system for extinguishing these fires was tested. Seven 50 gallon (189 litre) cardboard barrels were placed along one end of the trench into each of which 80 pounds (36 kg) of dry ice (frozen CO2) topped off with liquid nitrogen (N2) were placed. Wrapped with detonation cord, these barrels were then detonated in the face of the fire. The idea was to blow off the fire with the explosion and then have the CO2 and N2 suppress burnback. The system did work preventing burnback for nearly 7 minutes, but this was not a practical approach.