The Panzer 39, also known as the ‘LTL-H’ or ‘LTH’ (which was the Czechoslovakian export designation), was a Swiss light tank that served in the Swiss Army from 1939 to 1960. It was the basis of multiple proposed conversions, the first one being the 1941 modification featuring a 47 mm AT gun and later modifications would eventually turn it into the Nahkampfkanone 1. This was the first tank to be utilized by the Swiss which had proper anti-tank capabilities. Before that, Switzerland had bought the French Renault FT in 1921, called the MFT-17 “Moskito” in Swiss service, and, later, in 1934 and 1935, the Vickers-Armstrong Modell 1933/34 light tank called the Panzer 34/35. It was intended to build the Panzer 34 and 35 tanks in larger quantities and use them as border patrol and reconnaissance vehicles but, before long, it was decided that these tanks lacked the firepower and armor to be effective against other tanks. A Swiss delegation thus visited the German firm of Krupp in Essen and the Swedish firm of Landsverk in Stockholm in order to look for new vehicles to replace Panzer 34/35. However, neither Krupp nor Landsverk offered any vehicles that were to the liking of the Swiss, although one Landsverk L-60 was obtained for testing. It was believed that during their time in Sweden, the Swiss delegation was given a tip to visit the Czechoslovak company CKD (short for Ceskomoravka-Kolben-Danek), as many Praga AH-IV-Sv tankettes were being finalized for Sweden.

When looking at the development of the Panzer 39, consideration should be made of the earlier vehicles which CKD offered to Switzerland. As with many nations at the time, Switzerland opted to buy a new tank instead of developing their own. Swiss officials contacted CKD in 1937 saying that they would visit later in the year to look at new tanks. Not being a company to miss such an opportunity, CKD offered the Swiss some Praga AH-IV-Sv 3.5-tonne tankettes as well as the 7.5-tonne TNH-S tanks. During the visit of the Swiss delegation in early September 1937, they received a proposal for about 60 AH-IV-H tankettes which were similar to the Swedish version. However, the Swiss delegation deemed the tankette to be too short for traversing the alpine terrain and thus rejected the offer. The delegation then asked for a 6-tonne vehicle with 24 mm of armor and a domestic 20 mm gun as well as two Maxim machine guns. CKD, which was negotiating with Latvia and Peru at the time to sell a tank known as the LTL, got the request from Switzerland for their new tank. Since they had the LTL at their disposal, they offered it to Switzerland.

While it was armed with a 20 mm Oerlikon gun as required by the Swiss, this vehicle still did not satisfy the Swiss and was thus modified. After rigorous tests though, the deal was accepted and signed. This new vehicle was called LTL-H (also known as LTH) and the deal was for 24 of these vehicles, of which 12 vehicles were to be built in Czechoslovakia fitted with a 119 hp Skoda Praga EPA engine but without armament and optics.

The remaining 12 vehicles were built in Switzerland and fitted with a Swiss 110 hp Saurer CT1 D SZ 1007 engine. These 12 vehicles, as well as the 12 Czechoslovakian built ones, were armed with a 24 mm Panzerwagen Kanone 1938, a pair of 7.5 mm Panzerwagen Maschinengewehr 1938, and one 7.5 mm LMG 1925, all manufactured by the Waffenfabrik W+F Bern.

The layout of the Panzer 39 was like that of many other tanks of the time, with the engine being in a separate compartment to the rear and the crew compartment ahead of it, with a rotating turret on top of the vehicle.

The armor was 32 mm on the front of the hull and turret, with 15 mm on the sides and 8 mm on the rear of the tank.

The crew consisted of 3 men, a driver, a gunner for the main gun as well as the coaxial 7.5 mm LMG 1925 located on the left of the main gun. He was also, presumably, meant to load the main gun. Lastly, there was the tank commander whose job was to not only command the vehicle but also operate the radio and man the commander’s MG, a model 1938 7.5 mm Panzerwagen Maschinengewehr which was located on the right-hand side of the main gun in an independent ball mount.

Who would have operated the hull-mounted Pzw Mg 38 is not known, although it can be assumed that the gunner could also get into the MG position next to the driver if the need occurred.

Typical to CKD tanks of the time, the Panzer 39 had 4 large road wheels on each side, connected in pairs to a leaf-spring suspension. The drive wheel and transmission were in the front of the vehicle.

The main gun was derived from the 24 mm Tankbüchse 41 manufactured by W+F Bern. It had a clip size of 6 rounds and was a single-shot weapon. It could penetrate 43 mm of armor at a range of 150 meters with an initial shell velocity of 900 m/s for the armor-piercing shell. It could fire Armor Piercing (AP) rounds, as well as High-Explosive (HE) rounds, Tracer rounds, Training rounds with or without Tracer as well as Dummy rounds.

Following the end of WW2, throughout which Switzerland remained neutral, the Swiss Army underwent a reorganization and, in 1948, Pzw. Kp. 1, 2, and 3 were disbanded. This was followed by another change in 1949, when the former Pzw. Kp. 1 through 3 were renamed to Panzerjäger Kompanie ( Anti-tank regiment) 31 through 33. These units were then equipped with the G 13.

The Swiss Military quickly discovered that the 24 mm PzwK 38 was not sufficiently effective when it comes to penetrating armor. Thus, in 1941, plans to upgun the Panzer 39 were started and it was quickly decided that the caliber of choice would be 47 mm. The gun of choice was the 4.7 cm Pak 41 (renamed to 4.7 cm Panzerwagen Kanone 41 for mounting in the tank) and a new turret design for mounting the gun was submitted in April 1943.

The gun would have had a penetration of around 60 mm at point-blank, with the armor-piercing shell weighing 1.75 kg and having a muzzle velocity of 750 m/s. The new turret was significantly larger in order to fit the new gun, but kept the armor at around 30 mm at the front but only around 8-10 mm on the side and 8 mm on the rear. In addition to that, the new turret was welded instead of bolted to increase crew protection and lower weight. The requirement for this new turret was that it had to be designed in such a way that no hull modifications was needed in order to mount it. It was not until 1945 that the prototype was ready for testing with a wooden mockup gun mounted. By this time, the 47 mm gun was out of date and unable to provide the anti-armor capability to keep up with foreign tank’ armor. As a result, the plans for this modification were reversed. The single prototype turret was destroyed following a decision by the Swiss Military in late 1945 to turn all Panzer 39s into training vehicles, thus making the modification obsolete.

Like with many other nations at the time, CKD’s tanks formed the backbone of the Swiss Army and were the basis for many different modifications. The Panzer 39 underwent one more modification in the shape of the 34M Pz.K-41 which eventually lead to the Nahkampfkanone 1 project.

Switzerland was neutral during WWI and WWII and therefore would have had to fight a defensive war if attacked, especially during WWII. Swiss General Guisan expanded the existing bunkers and came up with the National Redoubt plan, which consisted of abandoning the lowlands by almost the entire military, only leaving a few bunkers occupied. These manned bunkers consisted of mainly the Rhine forts at the German border, as well as multiple tactically situated bunkers in the lowlands which were meant to weaken the invaders as much as possible until they reached the Redoubt itself. On top of heavily fortifying the Alps with countless smaller and larger bunker systems, many roads and bridges were rigged to explode at a moment’s notice. These sections of road and bridges were generally placed in front of bunkers in strategic positions, where convoys of potential invaders would all be stuck and could neither move forward nor backwards easily, therefore making them ideal targets for the bunkers which would have caused massive losses. On top of that, the railway connection through the Gotthard and various other North to South connections would have been destroyed making transporting goods between Nazi-Germany and fascist Italy a logistical nightmare.

Such a warfare in the Alps would also require the Swiss Military and its vehicles to be very mobile, therefore making heavy vehicles or vehicles with bad off-road capabilities useless in the mountainous terrain. This would also explain why Switzerland was happy with their Panzer 39 and their great off-roading ability as well as good reliability. They were perfectly suited for their terrain and defensive warfare. The vehicles that could be used in the Swiss Alps would have mostly been lightly armored ones, such as half-tracks and other light tanks, against which the 24 mm main gun of the Panzer 39 would have been more than sufficient. However, this plan abandoned a large part of the country and most of the population in the hands of the enemy. 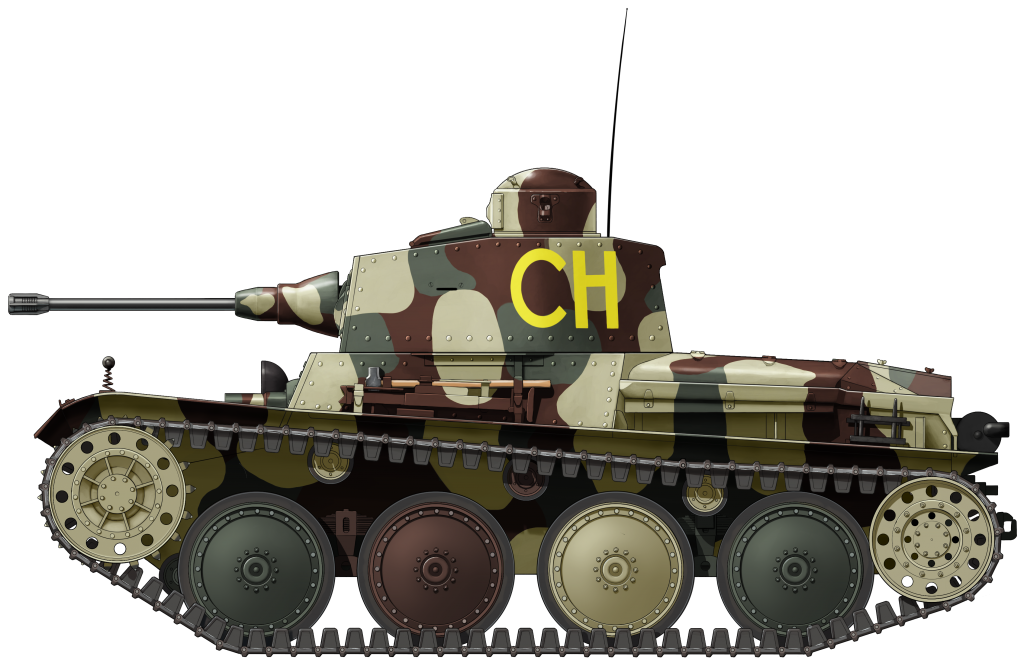 Panzer 39 illustration based on the surviving example at the Military museum Full-Rheuental. 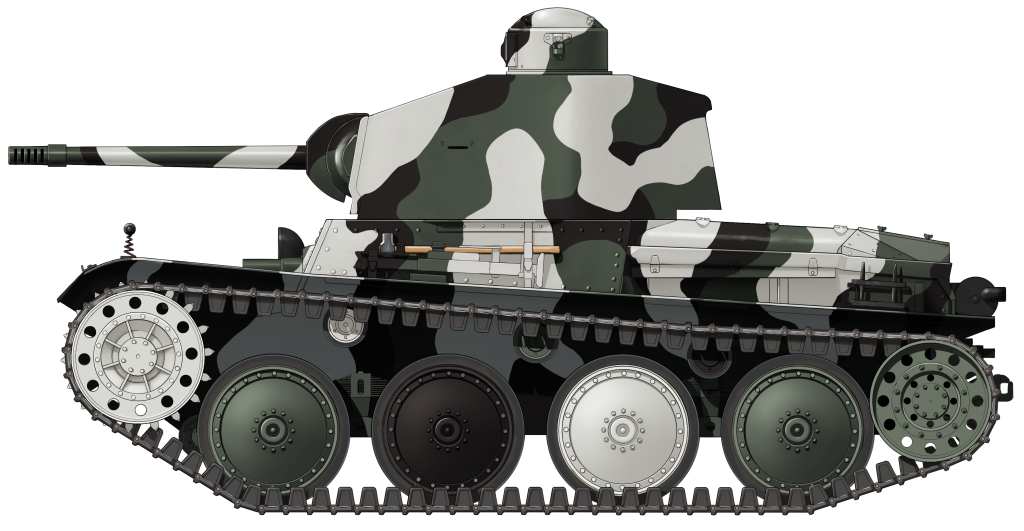 Both illustrations were produced by Ardhya Anargha, funded by our Patreon campaign.

They really take their time to up-gun their panzers…

I’m struggling in following the references. From what LTL tank was it designed? Was it Škoda-CKD TNH series? But those are quite a bit heavier. If possible, reference to specific model would be great as I wanted to see from which tank this model was developed.

Actually, my nation, Lithuania had ordered very similar configuration tanks. We lost our independence before those tanks were shipped, but we had similar order amounts, similar 20 mm anti-tank cannon, similar weight, though little bit less well armoured, weighting at 7,5 tons rather than 7,7 tons. Our model was also called LTL while model meant for this nation was called LTH. I do find exciting investigating model versions as it helps me to better understand tank’s life cycle.

These are amongst finest tanks available at that time. Though, I think that equipping this tank with short 75 mm cannon is possible. These low calibers provide little in terms of infantry support and making your tank more universal is a better in my eyes than being better in anti-armor role.

The TNH is the base design from which CKD developed both lighter and heavier vehicles. One of those was the TNH-S which was the basis for the Swedish vehicle (TNH-sv), and the Czech LT vz.38.
Another was the LTL indeed developed for Lithuania. The LTL would be the base for the LTL-H (the tank discussed in this article) and the LTP that was sold to Peru.
The LTL-H would influence the LTL design that led into the LTS (LT 40).

Your work is amazing. I always missed summary of military vehicle development. Countless models and their pictures are meaningless to me, but your chart briefly and efficiently summarizes everything that I would like to know. Do you have more graphs like this one? I would like to save them for my own educational use.