Early tank designs are fascinating, as many of the things which would later be determined to be important on a tank had not yet been identified and information on tank design and employment was relatively scarce. The lack of experience in design and usage led to some of the most interesting and, in equal measure, awful tank designs ever envisaged. The design by Frank Saczeany in 1918 is one of the former, and one of Canada’s first armored vehicle designs.
Saczeany’s primary objective was to design a motor-driven vehicle such as a tank, but with a power-operated door which would allow the exit of a large number of soldiers after having carried them into battle under armor for their own safety. In this way, what Saczeany is describing is actually one of the first ideas for an Armored Personnel Carrier (APC).
The envisaged vehicle would have to be able to protect the “large number” of men carried from enemy fire over rough ground and deliver them to the battlefield ready to fight the enemy. The overall shape of the vehicle is very similar in the layout of the fighting arrangements to the British ‘rhomboid’ shaped tanks of World War One. His drawings are dated the 16th September 1918.

Side view of the Saczeany design showing in dashed lined the track run for the vehicle. Photo: Patent CA203748

Propulsion was by means of an “endless belt after the manner of the usual caterpillar tread” and, just like the British designs, had the track following a path high across the tank before coming down to ground level providing for a very high ‘nose’. The track path drawn, however, is slightly different. Instead of going all of the way around the circumference of the tank, the tracks instead run below the level of the roof line around four key rollers but still above the level of the side sponsons. Furthermore, at the front, the track, rather than being exposed to enemy fire, came out of an armored cover protecting it from damage positioned just below the level of the nose. In this way, it can be assumed that the designer hoped to retain the high nose of the tank and the climbing ability whilst having some protection from enemy fire which could cripple the vehicle. However, it is expectable that such a track cover with no mud chutes was vulnerable to being clogged with mud and debris.

Unlike the British vehicles, this design left the back end of the tank empty for the mounted troops. This was done by moving the motor forwards to the crew space and housed just below the level of the sponsons and just ahead of the center-line of the tank on the left-hand side. The motor would drive the rear sprocket in much the same manner as the British tanks by means of a looped drive chain along each side. Both drive sprockets were powered by the same motor as power was transferred to the right-hand side via a power gear meshing with a pinion and control clutches. The rear drive sprockets would then pull the track under the tank moving it forwards as it then went back on its run up towards the tank’s roofline.
Steering for the design would be arranged by the manipulation of these clutches altering the power to each side to generate a slewing moment.

Drive system for the Saczeany design with the fore-mounted engine and rear-drive. Photo: Patent CA203748

The first and foremost purpose of the vehicle was to get troops to fight the enemy unharmed. During the war, when attacking, the main threats came from enemy machine-gun fire and barbed wire. The wire obstacle was solved by the vehicle’s nature of simply crushing and rippings its way through it. To protect from enemy fire it had to be armored with simple bulletproof plate.
It was not devoid of firepower either. In the main section for troops at the back of the vehicle were a series of protected loopholes on each side which the soldiers could fire from, and within each sponson, there were additional loopholes. All of these provided ample coverage by small arms to the flanks of the tank. Presumably, when attacking an enemy trench or position, it would be supported by other tanks which would have provided supporting fire. When not in use for firing from, these loopholes were protected by bulletproof glass windows which allowed good visibility to the exterior of the vehicle. 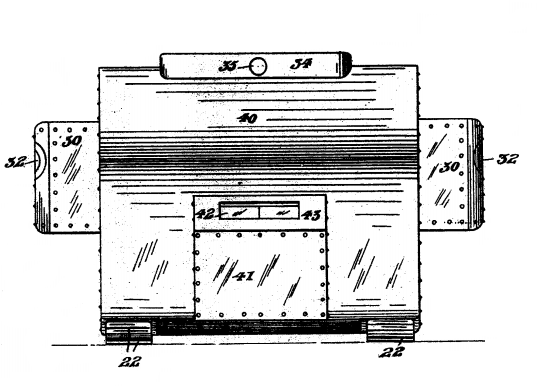 Front view of the Saczeany design showing the rectangular forward firing loopholes and the imposing front aspect of the concept. Photo: Patent CA203748
Firepower forwards was achieved in the same manner with two large covered loopholes in the front permitting troops to fire forwards. Additionally, in the sponsons (described simply as “box-shaped housings”), firing ports were provided in the fore and aft, enabling additional firepower to be used to the front. Presumably, the designer also had in mind the same sort of thing used in British designs with machine-guns in this position which would have been more useful than a service rifle for such a task.
Finally, on top of the vehicle was a large low circular turret described as a dome but drown in the form of a short cylinder. Four even spaced loopholes were spread around the circumference of this turret providing additional lookouts of positions to fire from.

The Saczeany Armoured Personel Carrier (APC) in a fictional livery, based on common styles of the period.

The APC with troop deployment platform open.
These two illustrations were modeled by Mr. C. Ryan, funded by our Patreon Campaign

Looking at the design it is very easy to miss its most important aspect, the transport of troops. Whilst there were other ideas for carrying troops under armor before this, they tended to rely on common doors, a very different idea. Instead of a door, there was a powered platform inside of the tank in which troops were carried. When they had to dismount, the tank driver could, by means of a clutch, engage a drive for the platform. Supported by vertical supports to the roof and a guide bar, this platform was very rigid as a way to prevent it from flexing, and when engaged, the entire platform, including the ‘tail’ of the tank, moved outwards in the rear of the tank. This not only formed the portal by which the troops could leave on both sides, but also meant that no soldier had to close the door afterward. Once dismounted, the tank crew could retract the platform closing the tail back over the portal and continue in the advance, either to support the troops it had dropped, or to return for a new batch. 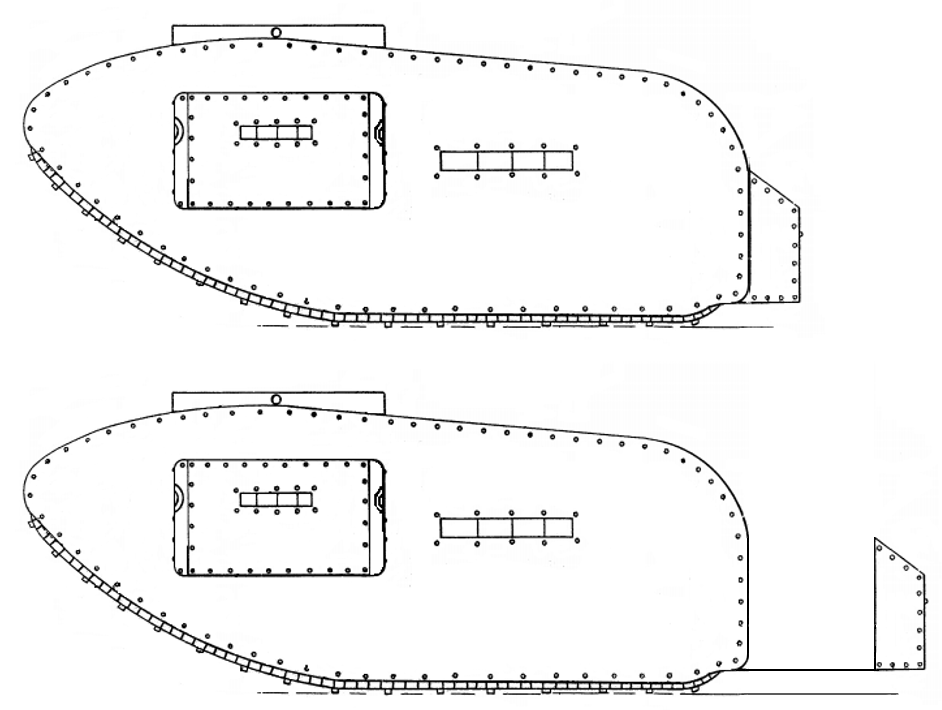 The means of delivery of the troops by the unique platform at the back. This image was adaped from Patent CA203748 by the author

Arrangement view of the troop platform showing the means of drive to move it out and back. The three vertical bars descending from the roof support a horizontal guide bar attached to the platform to keep it rigid and moving in a straight line. Photo: Patent CA203748

With the number of firing ports available, Saczeany saw the vehicle as being suitable, even when static, to work as a fort, although, such a static target would have, in reality, become prey to enemy artillery pretty quickly. Overall, the design is rather unremarkable with the shape being very much a copy of the existing British vehicle designs, which, by 1920, were already changing shape. The use of large sponsons had already fallen out of favour with the military, and the choice of individual firing ports provided nothing that a single machine-gun could not. The most important part of Saczeany’s design was the unusual sliding ‘tea-tray’ type platform to carry and deposit the troops which certainly showed a good level of thought to some of the problems in the design of an APC. Quite how soldiers would have christened such a delivery to the battlefield from the backside of a tank can only be imagined though.
It is not known what became of Mr. Saczeany or if he had any other military ideas, but his design and ideas never left the Patent office and he filed no more patents for military vehicles. This particular idea had been submitted during the closing months of World War One and the patent expired in 1937, but by that point it was obsolete.
An unfortunate fate for an idea which, in some ways, was ahead of its time.

This tank is ass