The first permanent standing Swedish Army (Armén) was founded in 1521. The country developed one of the longest military traditions in Europe, and built a Scandinavian Empire. It also had a long rivalry with Russia, culminating in the Gustavian Era (XVIIIth century). The war with Norway was the last conflict in 1814, before Sweden entered a long, peaceful era of neutrality.

This neutrality was maintained all long the XXth century, from WWI to the end of the Cold War. However, there was still defiance towards Russia, moreover the Soviet regime, which led to some involvement in the Finnish Civil War of January-May 1918. A few years later, the Army experimented with its first armored unit, equipped with Swedish tanks of German origin. It also maintained a conscript army up to very recently.

Sweden developed a sturdy industrial basis, allowing it to create armored cars and later tanks in the 1930s. The first improvised armored cars were possibly use as soon as 1918-19, mostly for internal security purposes. There is however no precise indication of a model and scarce photo evidence of this. Good roads were rare on the eastern borders and only practicable for a portion of the year, significantly reducing the use of armored cars. In 1921, German LK II light tanks, which had reached the pre-production stage during the war, were bought and smuggled into Sweden as “industrial tractors”. These became the first Swedish tanks, known as the Stridsvagn m/21, later modified and upgraded as the m/29.

The Stridsvagn M21 was the first Swedish tank in service, also helping to create the first operational unit used for training until 1938.

In 1925, however, the Army took delivery of its first series of armored cars, the Pansarbil (literally “armored car”) 25. Three vehicles were manufactured, each almost unique, two in 1925 and one in 1926. The fm/26 had a Puteaux gun, while the others had machine guns. In 1932, a single vehicle was built by Landsverk, the Pansarbil fm/29. It had four wheel drive and steering, allowing a rear driver. However, cross-country capabilities were still insufficient, mostly due to power-to-weight limitations. In addition, it was judged too costly and large for production. However, this unique vehicle was kept in service for trials and training until 1946. Another interesting precursor was the Stridsvagn (Strv) fm/31 wheel-cum-track tank, also designed in 1931 by Landsverk. It was based on a German design of the early 1920s. It had a 150 hp engine, weighed 11.5 tons and could top 75 km/h (45 mph) on road and 35 km/h (20 mph) cross country. In theory, the combination wheels/tracks allowed the vehicle extreme versatility on all terrain and got the best of both worlds, but the manufacture and maintenance of this system was just too complex and fragile for military practice. Tests took place in 1935-36, but the tank was only kept for training until 1940.

The Swedish Pansarbil m/31 looked like a truck with a large open cargo bay in which an antitank gun was installed. In all, 32 vehicles were produced by Bofors on Volvo & Chevrolet truck chassis until 1940, some remaining in service until 1958. Protected only against small arms fire, they were still capable of reaching 60 km/h on road, for a 4.2 t weight.

Sweden also took delivery, for testing purposes, of two Carden-Loyd Mk.V tankettes in 1929, used for training and evaluation until 1939, and the unique Stridsvagn fm/28, in fact a Renault NC 27 purchased from France in 1928 for evaluation and possible purchase. Problems with the transmission, tracks and suspensions cancelled the prospect of buying this vehicle and instead favored the development of a domestic tank.

After AB Landsverk, almost bankrupt, was re-capitalized by German investors (who took 60% shares), the company, now directed by Otto Merker, launched a successful family of armored vehicles, both for export and domestic needs. This was the L-180S 6×6 and Lynx 4×4 armored cars, the L-120 Norwegian tank, and the first modern Swedish tank, the L-10 m/31. Only three prototypes were built of the latter, which helped the popularization of the torsion bar concept and prepared for the first mass-produced Swedish tank, the Stridsvagn L-60. 219 units were built and declined into the m/39, 40 and 41 series. Early German tanks, like the Panzer II, took a lot from the early m/38 in terms of hull construction, turret design and suspensions. 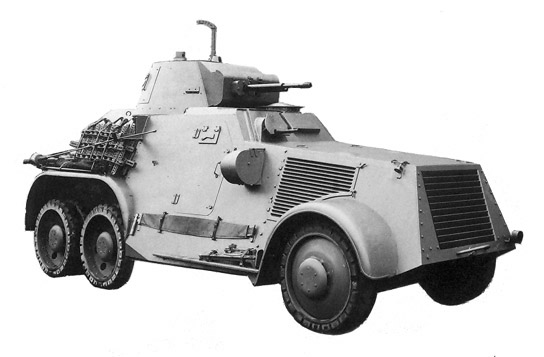 The Landsverk L-180 was a successful export model, although production was limited.

In addition to the Pansarbil m/31 armored trucks, the Swedish Army fielded two excellent armored cars during WWII: the 4×4 Pansarbil m/39 “Lynx”, armed with the same turret as the L60 light tanks, and the earlier Pansarbil L-180 series of 6×6 armored cars. The latter was quite the export successes, with a reputation of being reliable, fast and well protected. 48 were built and sold to the Netherlands, Denmark, Estonia, Lithuania and Ireland. Sweden only retained six in service.

Birth of the armored corps

One of the earliest units was the 1st Training Unit equipped with the Strv m/21 tanks, in 1921. The first armored car unit was the 1st Armored Car Platoon of 1926, equipped with the Pansarbil m/25 No. 602 (Pb 1- No. 1), to 603. It was also equipped with motorcycles and trucks and assigned to the Cavalry Regiment No.3 from Skövde. Tests were done with machine-guns, guns, radios, tracks and skis, plus different types of camouflages. Both units formed the backbone of future officers and instructors, which helped creating the future active Swedish armored units in the late 1930s.

However, the first armored regiments were created after 1939, when enough of the new light tanks were available, both from Czech purchases and locally-built. From 1943 on, the armored force was bolstered by the arrival of its first medium tank, the m/42. Before that, it received 48 Stridsvagn m/37 (Skoda AH-IV) light tanks and the Stridsvagn m/41 (similar to the LT vz 38/Panzer 38(t)).

In the 1936, the famous “Defense resolution” was passed. In Swedish, the Försvarsbeslut. It stipulated that two tank battalions would be formed every 5 years. As commented by Fale Burman, chief of “Army Procurement” in 1937, “This required the purchase of their main piece of military hardware, tanks. Already at an early stage, it was clear to us that if we simply chose the cannon-equipped tanks, we could have at most 15–20 of them.)”.

By 1939, 48 Czech-built tanks along with about 20 Landsverk L-60 tanks were in service, but it was just the beginning of the war program. Since 1890, the Swedish army had been organized into four divisions (along with the separate Northern Norrland and Gotland districts) but in 1942, a new military organization was adopted.

Despite its neutrality, Sweden looked more warily to its eastern border than to the 3rd Reich. Indeed, it allowed the Wehrmacht to use Swedish railways to transport, in June–July 1941, the whole 163rd Infantry Division, along with all its equipment and supplies, from Norway to Finland, to help the Finnish Army. In general, the principle of “permittenttrafik” was maintained all along the war, and large supplies of Swedish iron were still sold and shipped to Germany until 1945.

On the other hand, Sweden passed military intelligence to the Allies and helped train Danish and Norwegian refugees for clandestine operations in their own countries. From 1944, Swedish airbases were also opened to the Allies. To the country’s credit, it should also be noted that nearly all of Denmark’s 8,000 Jews were successfully rescued by sea, along with others from occupied Norway and Finnish refugees. On the other hand in 1946, about 2,500 German and Baltic prisoners were transferred to the USSR, where they were deported to labor camps.

The Landsverk L-60, which made up a third of the active Swedish tank force in WW2.

As a standing army in 1944, Sweden could muster a full armored division, some 700 tanks strong: 215 L60, 220 m/41, and 282 m/42 backed with dozens of specialized vehicles and 36* modern armored cars for reconnaissance. The m/41 and L-60 were excellent light tanks by the standards of 1941, with a Bofors 37 mm (1.46 in) rapid-fire cannon and up to 50 mm (1.97 in) of frontal armor. With the war raging in Finland until 1945, the Soviet threat seemed real and mobilized the army, proceeding to large exercises and large contingents of conscripts maintained under arms until 1945. KP-Bil at the Stockholm Army Museum. This 1942 vehicle remained in service until the 1990s. Stridsvagn m/42 at Revinge in 2012. This was the main WW2 Swedish medium tank. The Stridsvagn m/41 was of Czech design, but built in Sweden. It formed almost a third of WW2 Swedish tanks. Stridsvagn m/40K in Hässleholm. The L-60 was the first tank to use torsion bar suspensions. The rare “Risktanken” or L-120, the unique Norwegian tank built by AB Landsverk in 1936.