“You catch fish with both hands” (Vietnamese Proverb)

‘Type 63 SPAAG’ and ‘Type 65 SPAAG’ are unofficial names for a mysterious improvised self-propelled anti-aircraft gun. Put simply, the vehicle is a Soviet-supplied T-34-85 chassis with a new superstructure which features a Chinese-supplied 37mm Type 65 anti-aircraft gun. The vehicle was made by was put together by the North Vietnamese Army (NVA) during the Vietnam War (1965-1975) but captured and put on display at Aberdeen Proving Grounds, Maryland, USA. Many have concluded that only one vehicle of the type exists, but a wartime photo shows what appears to be another T-34-85 with a similar superstructure to the ‘Type 63/65 SPAAG’ featuring a 57mm S-60 AA gun. 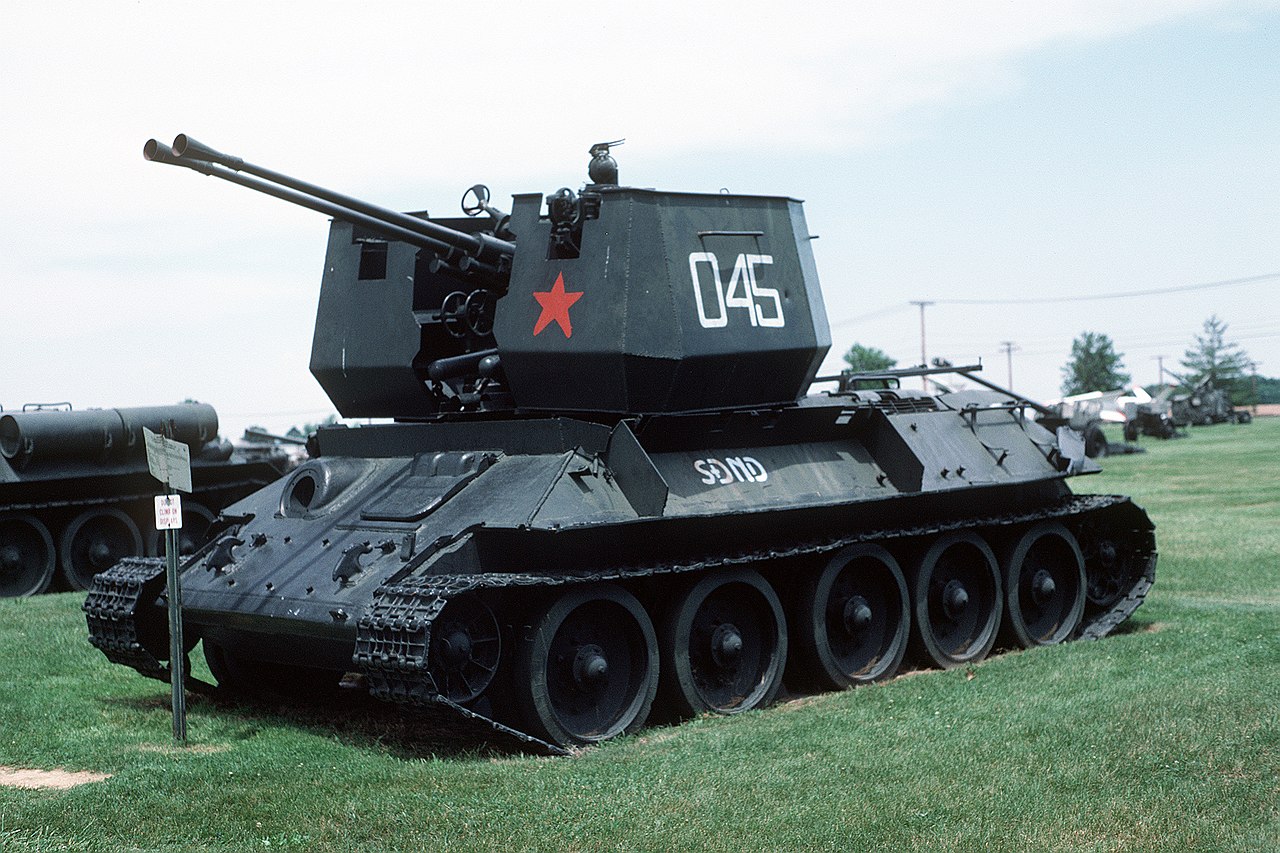 The ‘Type 63/65 SPAAG’, as it once stood at Aberdeen Proving Grounds. Note that this paint scheme is not original. Source: Wikipedia

American air support was one of the biggest features of the Vietnam War, so it is no surprise that Communist forces heavily invested in anti-aircraft (AA) weapons. Most of these were received from the USSR (as well as some from the People’s Republic of China) as either Surface-to-Air missiles (SAMs), or as AA artillery pieces. In fact, during the war, the USA lost an estimated 10,000 aircraft of all types, 5,607 of which were helicopters, due to Communist AA fire, with the majority belonging to AA artillery fire.
Helicopters perhaps played the most important role of all, being so versatile. Perhaps their greatest strength was the ability to land in small spaces, allowing them to quickly insert and evacuate ‘search and destroy’ teams, where riverboats and APCs would not be suitable. However, frequent low-flying and low-speed vis-à-vis winged aircraft meant that they were prone to enemy AA fire of all kinds.

The NVA’s first armoured unit is believed to have been formed in October 1959 consisting of an estimated 35 T-34-85s. However, it is known that the NVA was given more T-34-85s (and other Soviet vehicles) throughout the 1960s. For example, a declassified CIA Intelligence Memorandum dated May 1969 reports:

These vehicles were all supplied alongside other weapons including SAMs (Surface to Air Missiles), and aircraft such as IL-28s, MiG-21s, MiG-17s, Mi-6 helicopters and others.
This is not the total number of Soviet armour supplied to North Vietnam, but estimates on the types of vehicles supplied are not forthcoming. Exact numbers of the T-34-85 supplied to the NVA are difficult to trace, but it can be tentatively assumed that they were supplied perhaps no more than 100.
In addition to Soviet arms sales, the People’s Republic of China (PRC) sold armor and other weapons to North Vietnam from circa 1970 until around 1975, including the Type 59, Type 63/65 APC, Type 63 Light Tank (and perhaps others), but no Chinese SU-76s or T-34-85s (or ‘Type 58s’) were sold.
T-34-85s are believed to have mostly been used for training purposes, although some engagements are noted: 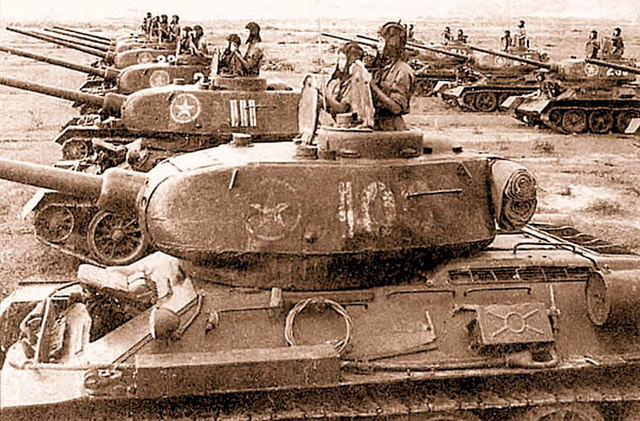 The earliest known reference to the name “Type 63” comes from Christopher Chant’s A Compendium of Armaments and Military Hardware (1987). However, ‘Type 65’ is somewhat more fitting, as the main gun of the vehicle is a Type 65 AA gun. That said, if there was another vehicle of the type featuring a 57mm S-60 (see below), then neither name is fitting. The author settled on ‘Type 63/65 SPAAG’ because it combines the two most common names, and helps differentiate the vehicle from other AFVs with the name ‘Type 63’.

The chassis of the ‘Type 63/65 SPAAG’ is a T-34-85 chassis which was made at UTZ 183 (Uralsky Tankovij Zavod) in the USSR sometime between 1944 and 1947. This is evident from the design of the tow hooks, the rear plate arrangement, rear plate hinges, fuel tank brackets, and the angled nose plate. The chassis appears unchanged except for the engine deck’s cover, which has been partly cut off, apparently with a power tool, to fit the turret superstructure. Onto the remains, a hinged turret lock was added. There is also a welded wall of sheet metal to protect the traverse system consisting of three pieces (one large central piece, and two smaller pieces either side). A small, non-standard fastener, possibly for a fuel tank, was also seen on the rear, just above the gear cover. Both hull sides have crudely made stowage bins welded on, although the lids were apparently lost during the war. The hull DT’s ball mount was also removed. Strangely, the headlamp was moved to the opposite side of the hull.

The main gun is a ‘Type 65’ anti-aircraft gun. This is essentially a double-barrelled Chinese copy of the Soviet 37mm 61-K AA gun, with modern variants of the gun still being in service today. The ‘Type 65’ features two separately loaded 5 round clips of armor-piercing ammunition. The main gun was supplied by the PRC at some stage during the Vietnam War, but further details are lacking (see below for supposed technical specifications). Electrical power for the main gun’s sights was given by a cable coming from the driver’s compartment. 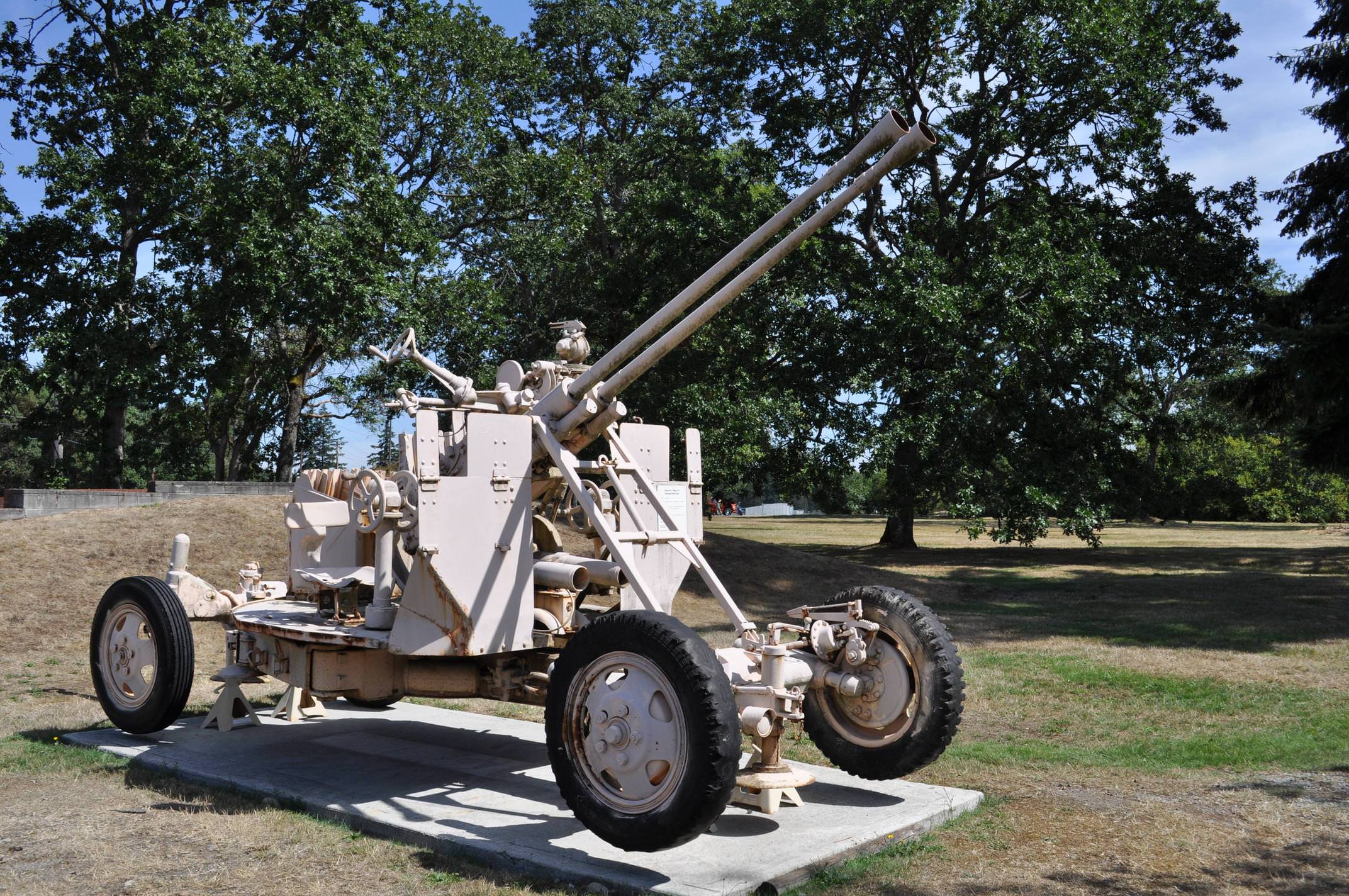 The ‘Type 63/65 SPAAG’ was an improvised design, as can be seen from its crude construction. However, it is likely that it was not a one-off, but possibly built in a small series. A photograph on display at the Vietnam People’s Air Force Museum in Hanoi shows three SPAAGs ‘moving to the front’, one of which is a T-34-85 featuring a superstructure which resembles the ‘Type 63/65 SPAAG’s’, although the gun is a single-barrelled Soviet 57mm S-60 AA gun. Another similar detail is the removed DT mount in the hull. The other two vehicles in the photograph are SU-76Ms that have been given new superstructures and one was given a 37mm 61-K, and the other featured a 23mm ZU-23-2 (or their Chinese copies). 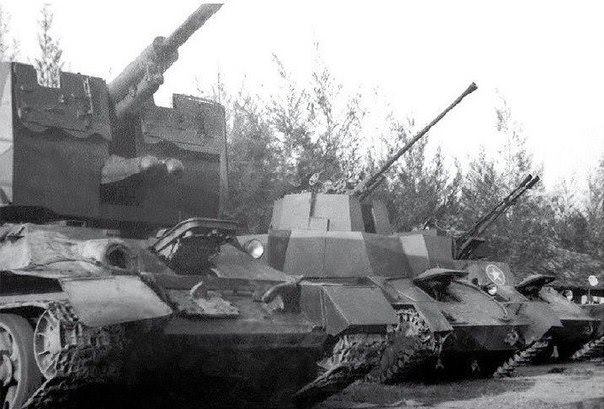 Three improvised NVA SPAAGs ‘going to the frontlines’. The T-34-85 SPAAG resembles greatly the Type 63/65 except that its superstructure appears to be more complex (featuring hinged gunshields on the front), and instead has a 57mm S-60 AA gun. The SU-76M SPAAG in the middle is clearly of a crude welded construction and features a 37mm 61-K. The other SU-76M SPAAG is apparently less complex than the one in the middle, instead featuring a new firing platform (possibly without any substantial armor for the gunners, and an NVA roundel painted on the front. Further details are lacking. Source: Steven Zaloga via the ‘T-34 Interest Group’ on Facebook.
From this, it can be concluded that the ‘Type 63/65 SPAAG’ (and other improvised SPAAGs) were made during the early 1970s in order to use up outdated chassis and mobilize desperately needed AA weapons.
The ‘Type 63/65 SPAAG’ was captured by the Army of the Republic of Vietnam’s (ARVN) 4th Infantry Regiment on 13th August 1972 during the ‘Spring – Summer Offensive’. The vehicle was then given to the USA and was sent to Aberdeen Proving Grounds in 1975 for testing where it was on display before being moved to Fort Sill, Oklahoma. 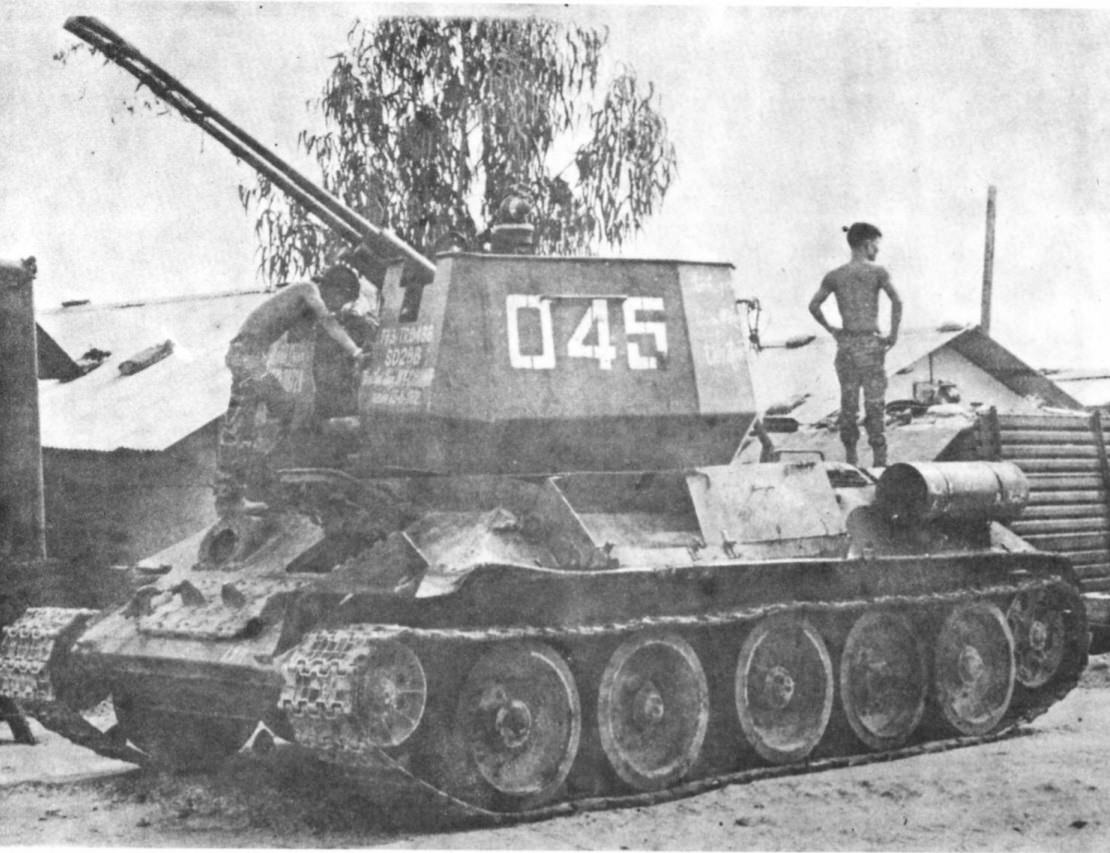 The Type 63/65 SPAAG after being captured in Vietnam. Note the loose lid for the hull stowage. Note also the original markings on the tank of ‘045’. The ends of the gun barrels appear to have the remains of foliage camouflage. Source: ‘T-34 Interest Group’ on Facebook. 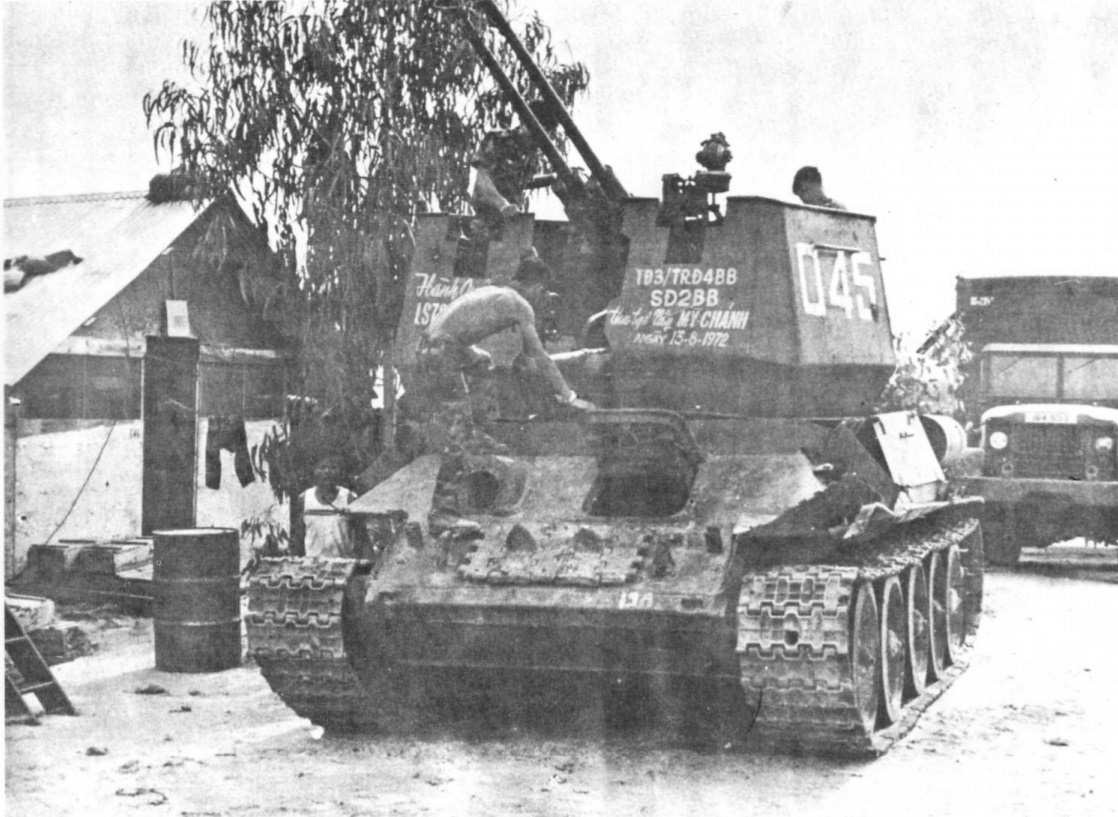 Different view of the above. Note the ARVN graffiti on the front of the superstructure indicating the unit which captured the vehicle and when. Source: ‘AFV G2 Volume 5 Number 12 (May-June 1977)’.

There are many rumours circulating the internet on the ‘Type 63/65 SPAAG’ including:

The evidence debunking these rumours is thus: 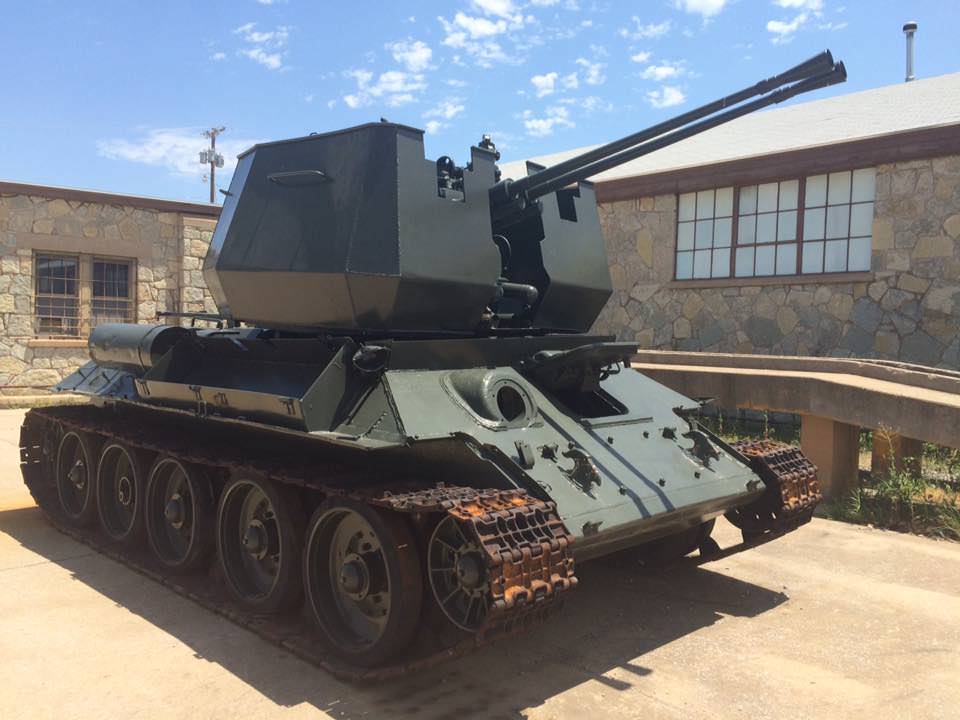 The ‘Type 63/65 SPAAG’ after being repainted at Fort Sill, c. July 2016. Note the removed DT mount. Note also the welded non-standard stowage bin on the hull with the lid missing. Also note the squashed headlamp, which has strangely been moved to the other side of the hull. Source: Charlie Pritchett via the ‘T-34 Interest Group’ on Facebook. 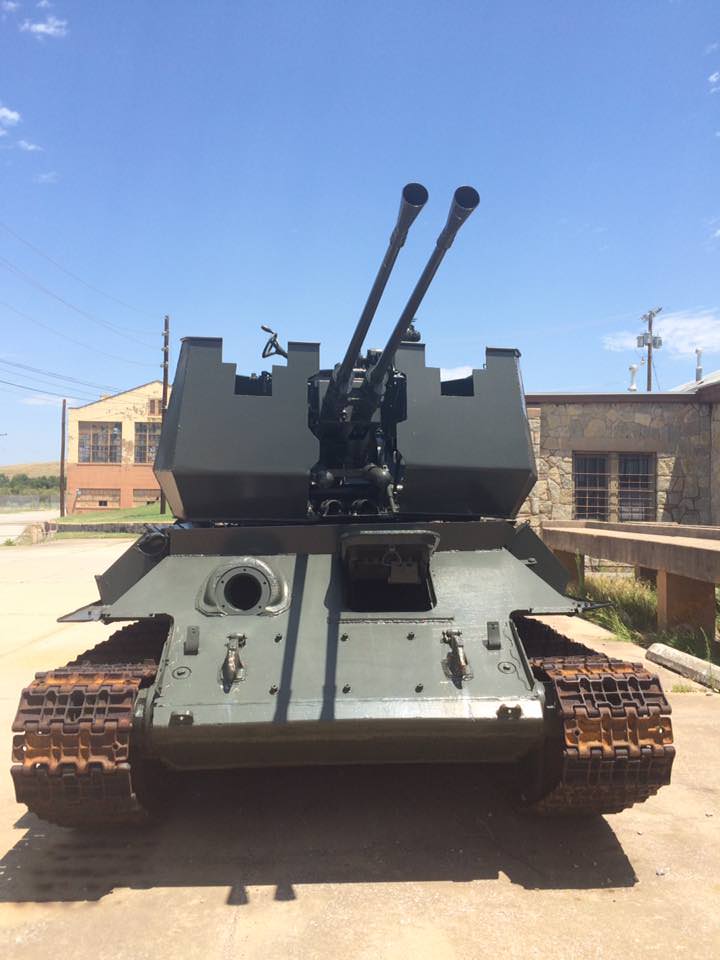 Front view of the above. Source: Charlie Pritchett via the ‘T-34 Interest Group’ on Facebook. 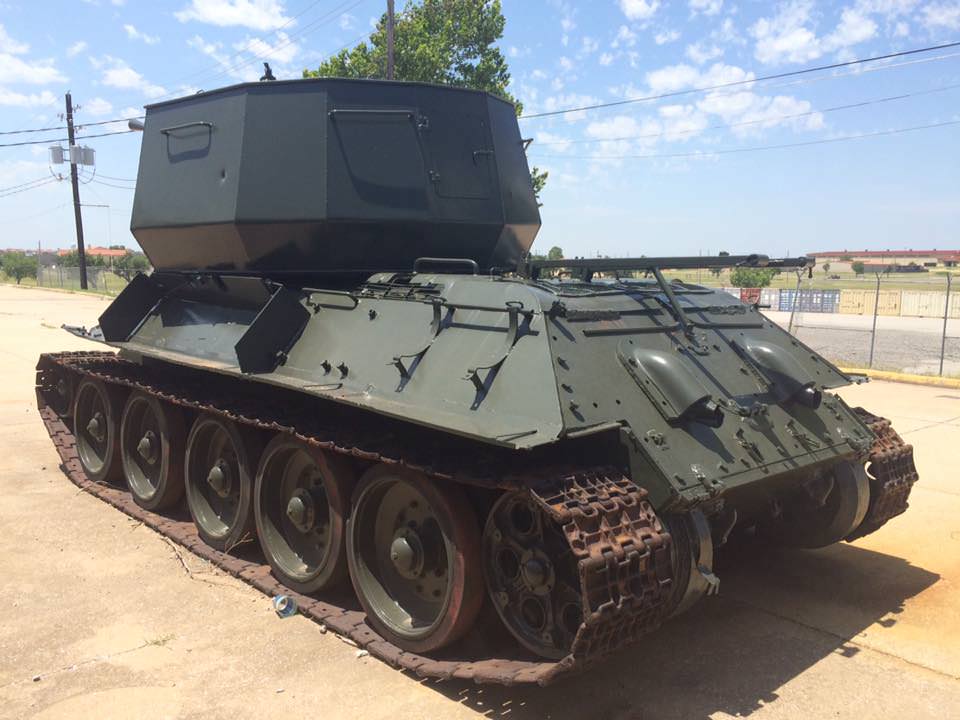 Different view of the above. Note the damaged hull stowage box. Note also the UTZ 183 fuel tanks and rear hinges. Below the handrail on the side of the superstructure, one can also see a small arms fire penetration. Source: Charlie Pritchett via the ‘T-34 Interest Group’ on Facebook. 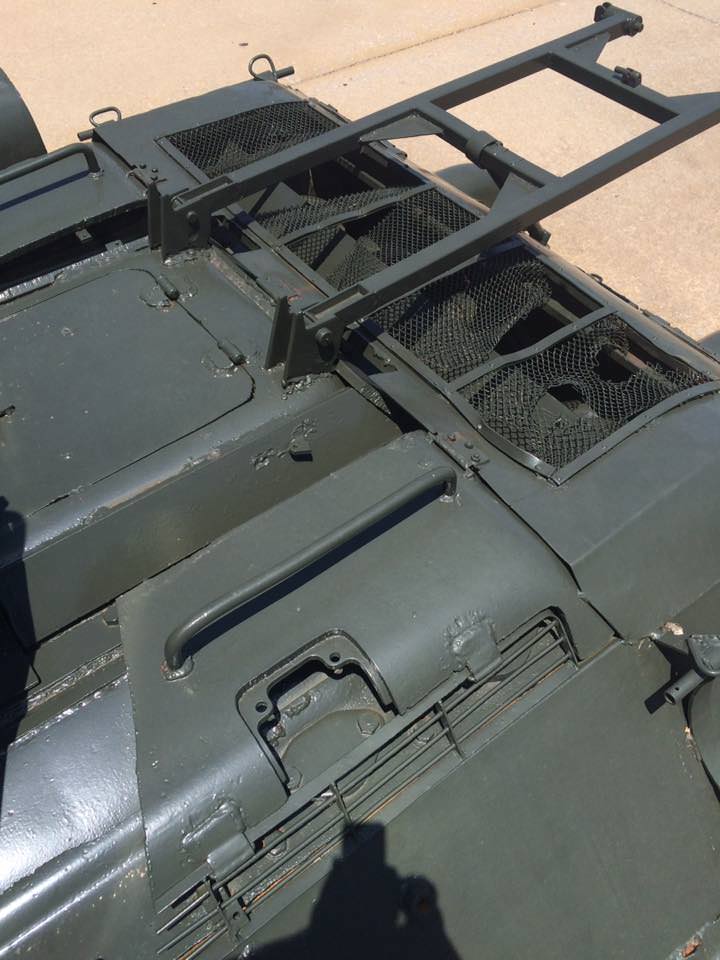 Different view of the above – engine deck details. One can clearly see that the deck’s covers have been cut off to allow the turret to traverse. Note also the turret lock frame. Source: Charlie Pritchett via the ‘T-34 Interest Group’ on Facebook. 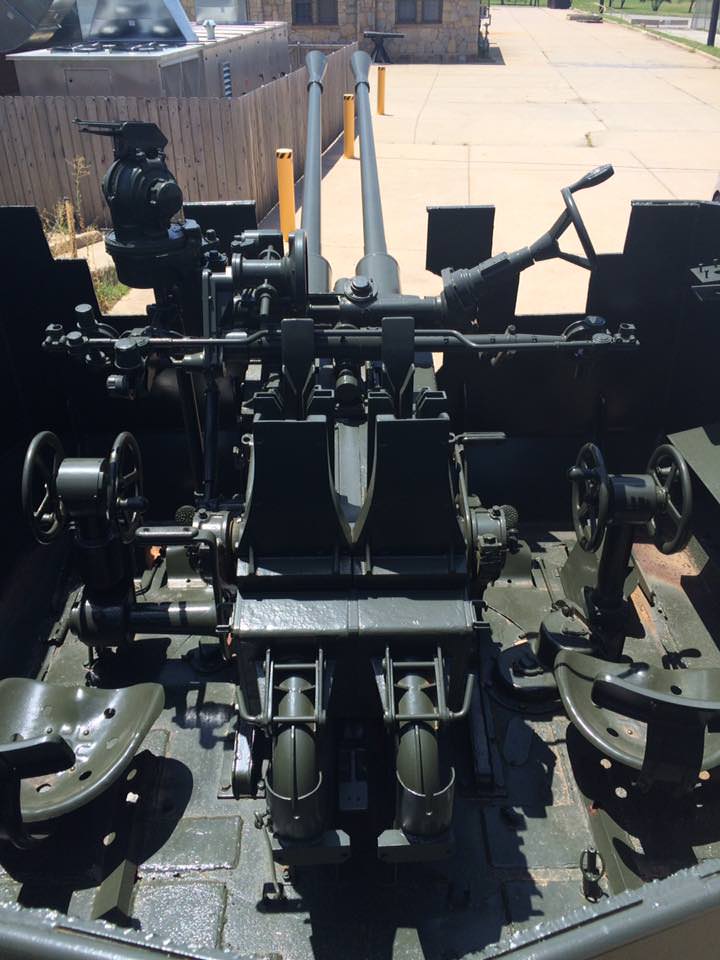 Different view of the above. Turret interior details as viewed from behind. Source: Charlie Pritchett via the ‘T-34 Interest Group’ on Facebook. 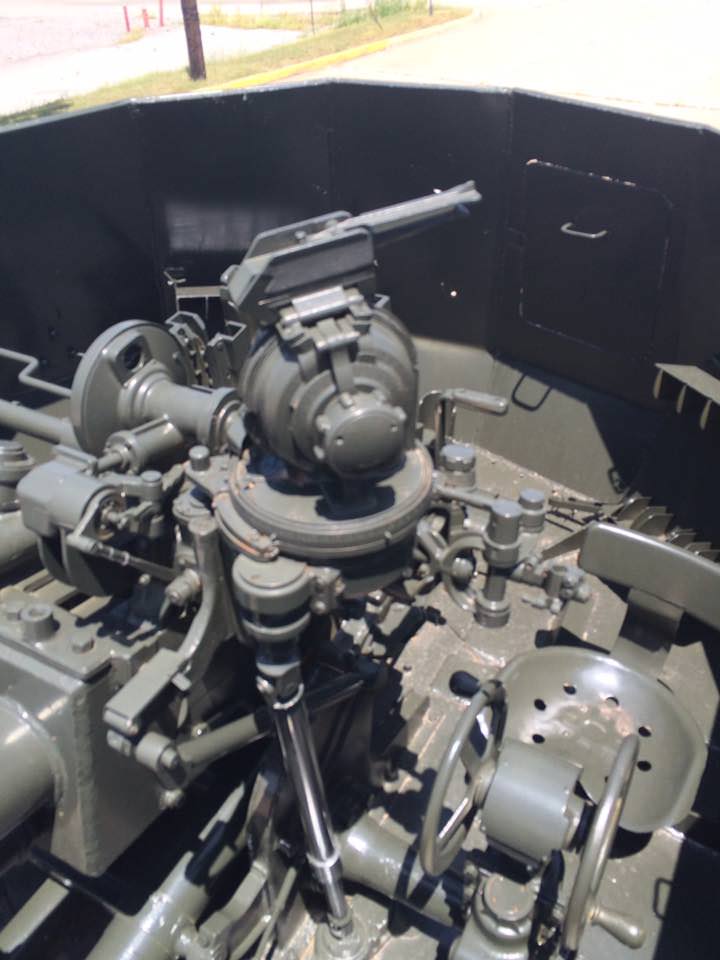 Different view of the above. Turret interior details as viewed from the front. Source: Charlie Pritchett via the ‘T-34 Interest Group’ on Facebook. 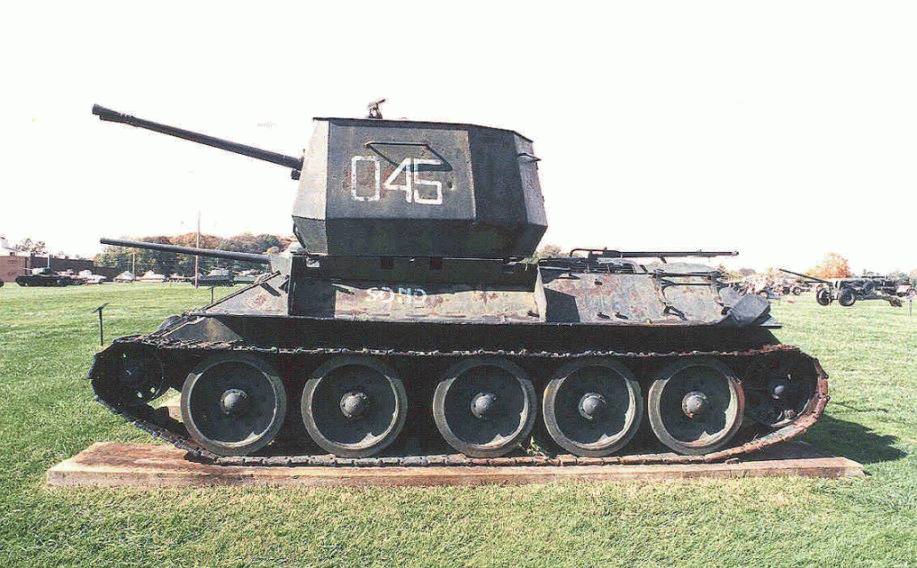 Side view of the ‘Type 63/65 SPAAG’ when it was on display at Aberdeen Proving Grounds. Source: globalsecurity.org 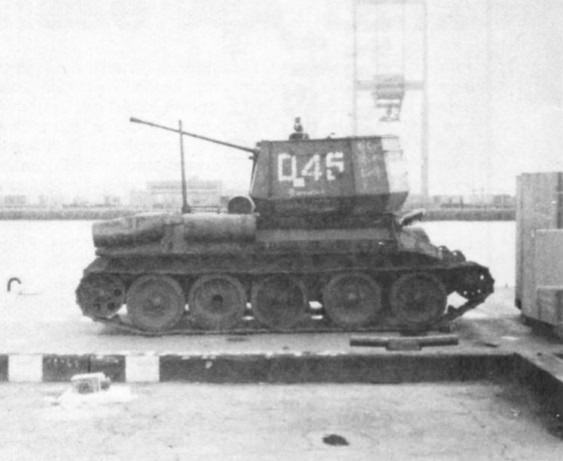 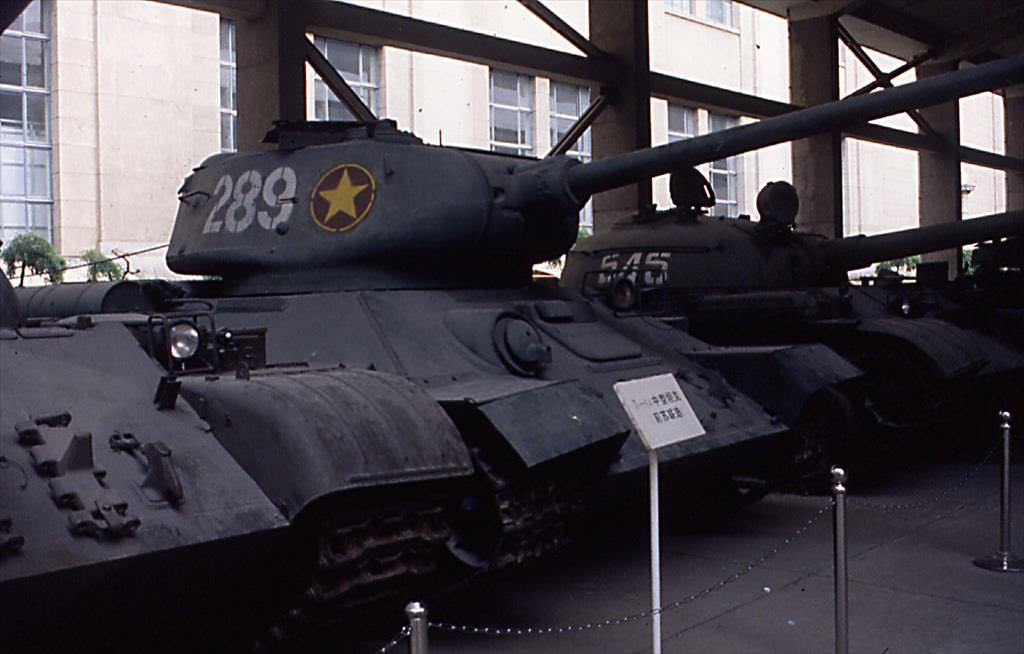 AFV G2 Volume 5 Number 12 (May-June 1977)
Chant, Christopher, A Compendium of Armaments and Military Hardware (London: Routledge, 2014). (Routledge Revival e-book of the original 1987 book).
The Type 63 SPAAG on globalsecurity.org
The Type 63 on Wikipedia
The Type 63 on Militaryfactory.com
The Type 65 on wiki.warthunder.com (Note: In a separate article, the developers of the game note some more accurate conclusions)

Hey, Um I am from Vietnam and I would love to see my country tanks in here it would be great Thanks!

Same guy also and I would love to see every tank operated by Vietnam since I am from here.