NASA had worked together with the Ames Research Center on a specialist suit portal for the NASA-Langley DOE Lunar Rover with the design having potential applications not just in space, but on Earth too. Particularly, this system was seen as being of potential value to a cleanup response for a hazardous materials (HAZMAT) incident, whether accidental or the result of a criminal act. The concept would need a large simple vehicle on which to be mounted. Protected from fire, debris, and even explosions, and able to access remote or dangerous sites and still provide enough internal space for a crew and equipment.
The ideal vehicle for the program was the M113-based M577A3 Command Post variant, as it was available, cheap, and provided plenty of internal space. NASA were familiar with this type of vehicle, already having four M113s in use as ‘Armoured Rescuers‘. In order to provide even more room, the final vehicle selected for a prototype was to be a longer bodied version with an additional roadwheel (6 instead of 5). It would be known as the XHRV-1; ‘eXperimental HAZMAT Response Vehicle’. 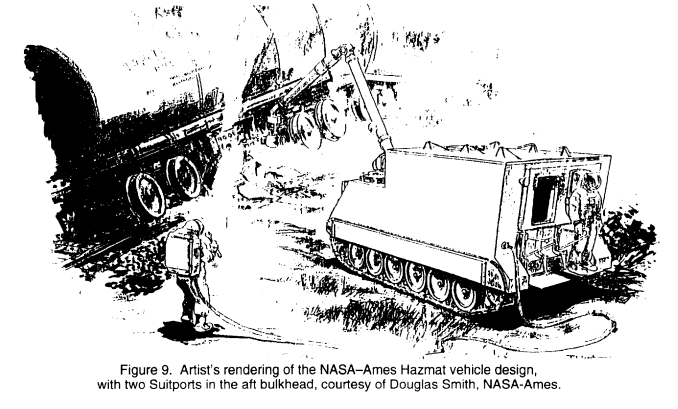 Artists rendering of the initial concept NASA-Ames-HAZMAT vehicle at the scene of a HAZMAT incident. Note the high original position of the suitports. Photo: Ames/FMC

Two pieces of Concept art for the program. The first one is as it appeared in Popular Mechanics Magazine, February 1994. Note the different position of the manipulator arm and the single suitport rather than the double type. Photo: Popular Mechanics. The second artist’s impression shows it in use following a hazardous materials incident or terrorist attack on a subway. Photo: kraftelerrobotics

Original patent image and artwork based on the patent image. Source: USPTO and unknown
Work on the project began in 1994 when Ames Research took delivery of a single M577A3 Armoured Personnel Carrier (APC) on loan from the FMC Corporation. The lead for the design work on the vehicle was Philip Culbertson and the efforts focussed on two areas: the front manipulator and the two suitports at the back with FMC and Ames responsible respectively.

Inner view of the suitports showing one nested port attached and the other removed. The amount of space inside the vehicle is very apparent. Photo: NASA. Seen from the rear the vehicle has two suits mounted externally on the back attached to the suitports. Image taken during HAZMAT exercise ‘DART 1998’. Photo: NASA/Ames

The design mounted two suitports at the back in the rear bulkhead. These were to provide a rapid entry/exit portal to/from the vehicle permitting rapid donning and doffing for up to two specially trained crew.
At the front is a row of additional lights and cameras and presumably an array of sensors for temperature, wind speed, and air sampling, although no radiation sensors or protection is known to have been provided. Below these, on the front right-hand corner, is a distinctive angular mounting point welded to the hull onto which a manipulator arm was mounted. FMC had worked on a similar arm back in the 1960’s which indicated the expected capacity of the XHRV-1 arm had a load capacity of 600 lbs (272kg) and was fitted with a utility tool to the front to cut or grip. Below this arm, and missing from the prototype (although shown in the artwork), was a bulldozer blade which would have allowed the vehicle to create temporary berms or damn around a chemical spill as well as be used for providing support when using the arm extended from the front of the vehicle. In the front centre of the vehicle, on the upper cab, was a telescoping arm on which would be fitted a stereoscopic camera system and spot lights.

XHRV-1 artwork showing manipulator arm and bulldozer blade deployed. Photo: unknown
No weapons of any kind were carried on the vehicle. Internally, the vehicle was equipped with an air-conditioning overpressure system which not only provided respite from the heat of wearing the suits but also served to provide a slight overpressure inside which assisted in preventing the ingress of toxins from the external environment.
An additional item for the vehicle was the provision of what would now be called a drone – but was originally listed as a ‘Robot Helicopter’ – which was affixed to the front top left of the cab and controlled from inside. This ‘helicopter’ would provide real-time stereoscopic television images back to the crew inside as well as environmental sensors.
The driver was provided with an unusual polycarbonate dome over his circular hatch. A second one is shown in one of the pieces of artwork over the crewspace too. These domes provided a wide and clear view of the exterior along with a seal from the environment.
The armored body of the XHRV-1 was identical to that of the M577A3 and provided a completely sealed body against hazardous material as well as some limited protection from debris or even explosions which might occur while conducting assessment or cleanup. Additionally, the tracked body of the vehicle was ideal for accessing a site over tracks, rough ground or over debris such as a collapsed building. 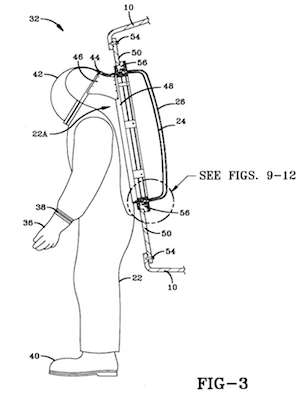 Details of the suitport on the back of the vehicle from the 1997 patent. Photo: USPTO

Crew member demonstrating the donning of the suit in attachment to the nested hatch on the back in the area known as ‘The Porch’. The handle is to assist in the process. Images taken at the FMC testing ground. Photo: NASA/Ames

Illustration of the ‘eXperimental HAZMAT Response Vehicle’ or ‘XHRV-1’ by William ‘Richtor’ Byrd, funded by our Patreon Campaign

The crew member is cocooned within the APC, protected by its armor from falling debris etc., and sealed from the outside air unsuited. When it comes time to suit up, the crew member simply climbs into the suit within the port in the rear and reseals the nested hatch behind him. All he then has to do is to decouple the suit from the port and go about their duties.
To get back inside, the process is simply reversed. The crew member backs up to the port and re-couples it to the port. Once recoupled, the inner part is opened into the vehicle and the crew member backs out of the suit back inside the vehicle. At no time during the entire process is that crew member of the inside of the vehicle exposed to the outside environment. This is a very efficient system permitting repeated operations by up to several operators over several hours if needs be as the crew members can be rested out of their suit whilst another takes over. The exact crew complement is not known, but the artwork for the patent shows two operators outside, a driver, a commander, and two additional technicians inside for a total of 6 men. 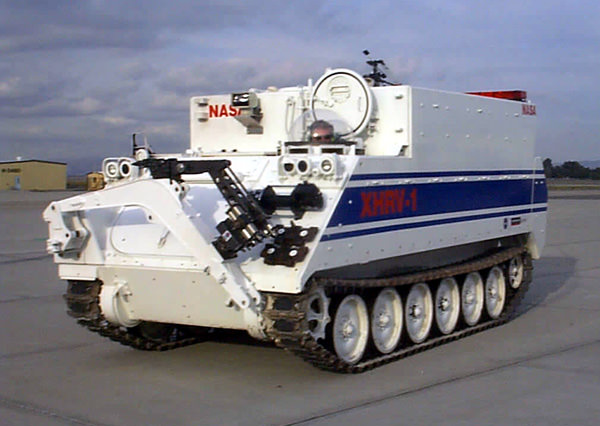 XHRV-1 from the front showing the stowed position for the manipulator arm and additional light fittings on the front. Of special note is the polycarbonate bubble for the driver. Image taken during HAZMAT exercise ‘DART 1998’ Photo: NASA

The XHRV-1 had significant potential advantages over existing hazardous materials response vehicles and procedures. Firstly, the crew were more comfortable and better protected by virtue of the armored body and air conditioning system. Secondly, the ability to return and doff the suit without having to leave the hot-zone permitted more rest for the operator and a longer time they would be able to operate within the zone before becoming exhausted. The vehicle was a standard production machine with a well-proven drivetrain and sturdy body

The M577, like the M113, was a simple and rugged platform, but they were obsolete by the 1990’s for military purposes. This programme offered FMC a new potential market to refurbish or build new vehicles for civil purposes, but it was not to be. For unknown reasons, the whole program was canceled despite the advantages of the system and the need for such vehicles in some facilities. The designers had considered it could have seen use not just in specialist facilities handling hazardous waste, but potentially Federal State resources and even some municipal Fire Departments in the major metropolitan areas. The existing prototype was returned to FMC and the manipulator and other controls were stripped off. Since then she has been purchased by the Eagle Field foundation in California and repainted green. 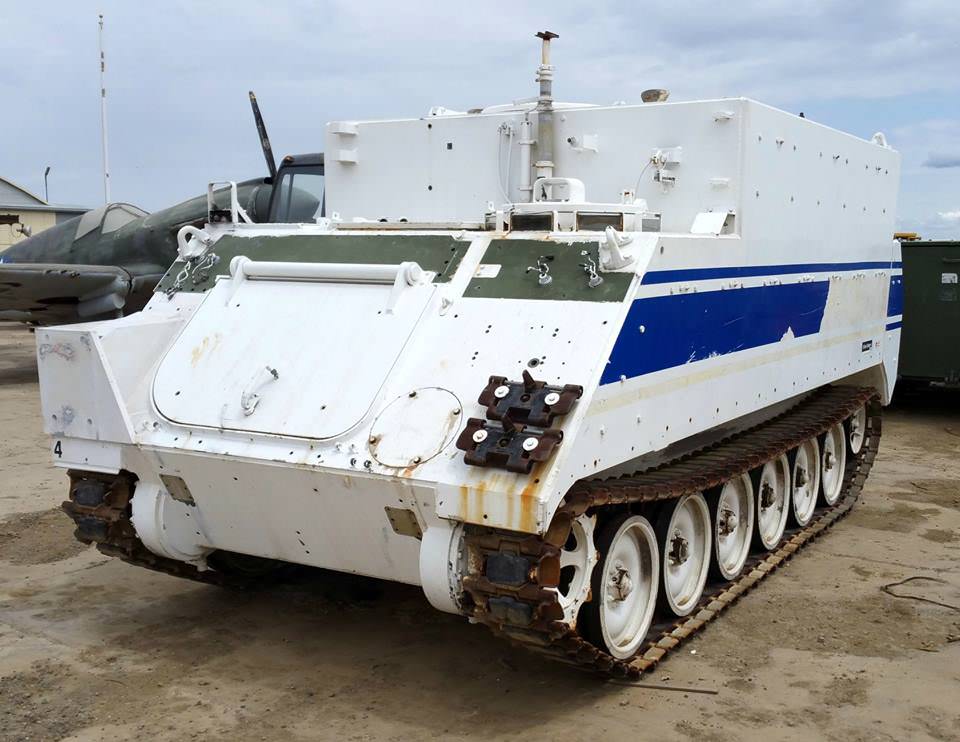 Stripped of fittings and the manipulator, the XHRV-1 awaiting disposal after termination of the program. Photo: Eagle field Foundation 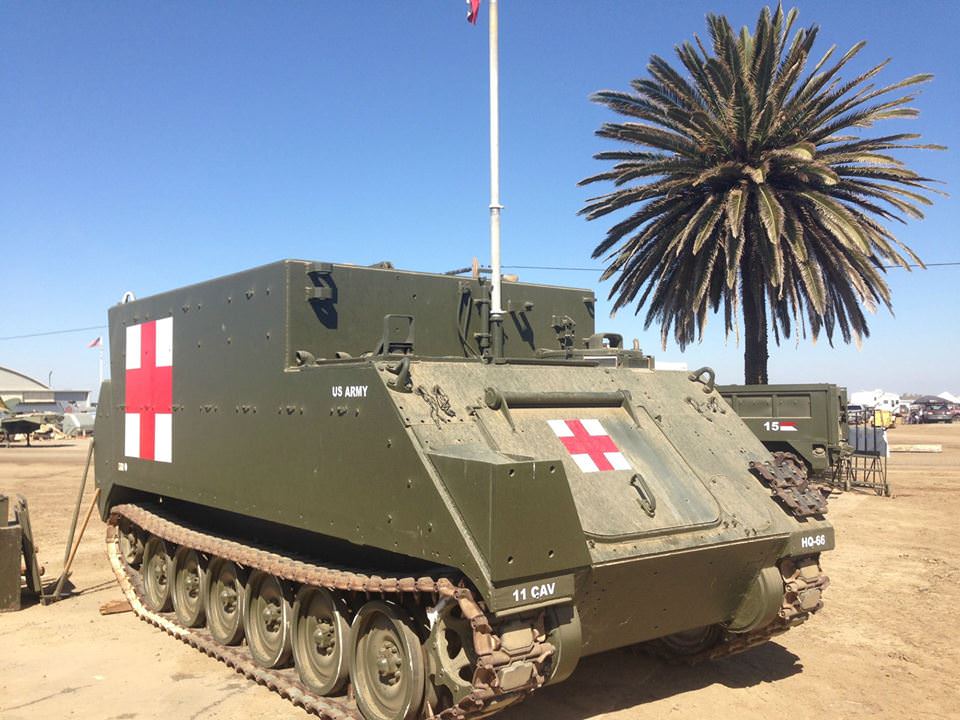 Pretty awesome concept and looks like it could be revived pretty easily especially with today’s tech!
Too bad they never followed through!