Kahn’s Obstacle Ball or Rolling Fortress tank, a giant concrete ball-shaped tank, comes from the unlikely source of Mandatory Palestine. Mandatory Palestine is, perhaps, not the first place which comes to mind when considering military inventions, but what it did have was a large number of immigrants, especially Jewish immigrants from Europe, settling there. Seeing his home country of Poland overrun and under occupation, Mr. L. Kahn, a Polish-born engineer living in Palestine in June 1941, decided to send his inventions into the Ministry of Works in Mandatory Palestine for potential use in the war. No doubt he could see in the newsreels or read in the papers the ravages of this new World War and decided to turn his skills to the creation of weapons. His letter, written in June 1941, did not go very far though; his ideas were mostly poorly conceived or impractical and lay forgotten for decades. Of his ideas, it is perhaps his ‘tank’ which by virtue of its novelty is most worthy of remembrance.
Kahn, an engineer working for Technotrade Engineering and Technical Supply, Herzl Street, Tel Aviv, sent his suggestions in on the 16th June 1941 along with sketches and some explanation of the ideas.
Kahn’s is not the only ‘ball tank’. In fact, there were far earlier designs, such as the “Tumbleweed tank”, designed by the Texan inventor A.J. Richardson in 1936. There was also a mysterious German attempt known as the ‘Kugelpanzer’. 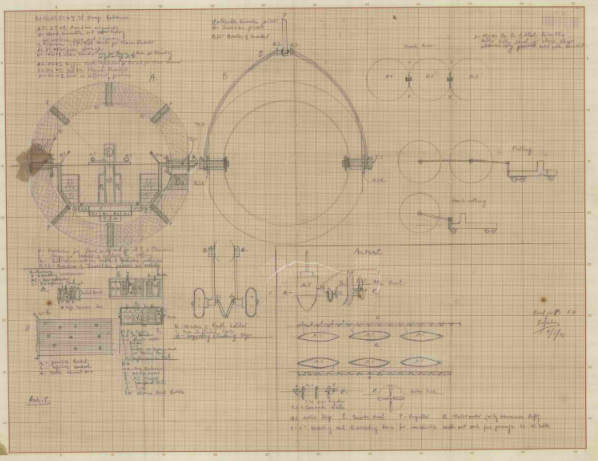 Plans for Kahn’s Rolling Fortress and method of towing. The area lined-off in the bottom right includes sketches of his anti-torpedo related ideas. Photo: National Archives of Israel

This design by Kahn was in an unorthodox shape for a vehicle, a sphere. Whilst there were other ideas for ‘ball-tanks’ being developed elsewhere at the same time, perhaps none of them were on this scale, which combined the ideas of the ‘ball’ with the size of the ‘big-wheel’ landships. Whereas a big wheel was needed to reduce the high ground pressure of a small wheel, in this case, a giant sphere was needed to reduce the ground pressure of a small sphere. Being big would have other advantages too for an obstacle ball.
This vehicle was to be enormous, 20 to 50 feet (6.1m to 15.2m) in diameter with walls 20 to 50 inches (0.5m to 1.3m) thick made from iron-reinforced cast concrete.
The ball was to be cast and then pressurized with high-pressure steam of 100 lb per sq. in. (6.9 x 105 Pascals) and impregnated with carbon dioxide for several hours to help cure the mix of cement, stone chippings, and sand. There was no rebar added within the mix but it was bound with circular irons to provide support for the concrete body.
Kahn is not clear in his letter as to how he expected a hollow sphere to be cast, so the assumption is that it would instead be cast in two halves and then bolted together across one of these boundary ‘irons’. On the smallest end of the scale, this design is a 6.1m diameter ball with walls just 0.5 m thick which would use approximately 49.4 m3 of concrete weighing about 123 tonnes just for the armor. On the upper end, however, the maths shows what a poor idea it really was, as with a diameter of 15.2 m and walls 1.3 m thick, this would mean over 726 cubic meters of concrete and would weigh not less than 1,800 tonnes.
The reason for the pressurization and carbon dioxide infused concrete is that, according to Kahn, this would increase not just the curing time (the time taken for the concrete to set and harden), but also significantly increase the strength by a factor of 5 to 8 times. Kahn elaborated that using this method his ‘light’ wall scheme just 20” (0.5m) thick provided the equivalent strength of a wall 6 feet (1.8m) thick. As Kahn claimed that this 6’ thick armour would be able to resist the shock from even the largest of enemy guns and howitzers, it is unclear as to why a scheme with walls 1.3m thick would ever need to have been considered.

Within the ball, things became more interesting. Behind these very thick concrete armour walls was an internal ‘car’ which, attached along an axis by hollow steel pins to the shell, rotated independently of the shell. Thus, as the ball moved, the internal car rotated inside it staying level regardless of the position of the ball.
There was not, however, a double rotation axis, meaning that this stability was not duplicated when the ball obstacle was to move along a sidegrade. There was to be sufficient space (69m3 min. to 1499m3 max.) within the ball for crew, weaponry, and stores.

To move these balls around, Kahn did not foresee an internal engine, but instead, two different methods of towing. One was to use a bespoke carriage trailer which was towed behind a standard truck and attached to the ball by the same axial rotation points. Even at 14.4 tonnes though, this ball would likely have done considerable damage to any prepared road surface and would tax the towing ability of a truck uphill as well as being dangerous on any downwards slope although Kahn did consider the need to brake the axial shaft on this carriage for presumably this exact reason. For the larger idea, no truck was capable of moving such an enormous ball and 15.2m was wider than most roads anyway.
On top of this, Kahn foresaw these balls being attached together to form trains behind a truck with between 3 and 5 hooked together meaning a weight being towed between 369 tonnes and somewhat ambitious 9,000 tonnes.

Illustration of the 23 tonne and 1,800 tonne Obstacle Ball or ‘Rolling Fortress’. Modeled by Mr. C. Ryan, funded by our Patreon campaign.

As a defensive fortress, the idea of these giant balls perhaps had some merit to them. They could be anchored together and would be impassable to vehicles, hard to bridge over due to their shape, and hard to destroy. One advantage and clever feature of the design was the low-grade materials used. Apart from pressurizing the concrete, the castings were at least simple enough along with the irons that it could be manufactured locally in theatre rather than in a factory which would have saved time, money and engineering to focus of other things as well as remove the problems of strategic transport. It was not the only vehicle during the war to use concrete as armour. The Bison mobile pillboxes (truck-based pillboxes) were a similar idea and even some tanks used concrete too, but the scale of the concrete used as well as the shape of the vehicle is what sets it apart.
Multiple balls would be connected together through a simple double-ended bolt passed through the hollow axles, and then with nuts tightened up on the inside drawing the balls together. These balls would then be anchored together firmly whilst still able to rotate and move along a common axis, although Kahn made no mention of moving the balls whilst connected, simply drawing a train of three balls fastened together. After connection as a fortress, these balls could then be armed, therefore not just forming a physical barrier, but a fighting fortress line too, or at least, that was Mr. Kahn’s idea. Smaller balls would be fitted with machine-guns or mortars and the larger ones would be able to take cannons or even a flamethrower with the fuel tank held under the fighting platform in the bottom of the ball, although the actual positioning of the loopholes to fire from was poorly considered. The field of fire from each ball was very tightly constrained by an inability to traverse, meaning no matter how well armed a single ball was, it would be surrounded and overwhelmed. They had to, therefore, rely on flanking supporting fire, and although he foresaw these could be ‘quickly deployed to the front’, did not consider the problem for the unarmoured trucks moving these under fire. Later in his letter, Kahn describes the ‘anti-tank flamethrower’ as firing not through a loophole in the ball, but actually fixed to the axial shaft of the ball and projecting from two nozzles, with one in each direction coming from this mounting point.
Also within the area under the fighting platform was to be a tank of water for cooling the machine-guns, indicating perhaps his thoughts of Vickers water-cooled machine-guns or Maxim guns as the primary armament.
For crew access, there were to be two doors also made from concrete and the same thickness as the walls. They were set at opposite ends at the front and rear, meaning whichever angle the ball was at, one door would face down to allow the crew to escape. The other door would obviously be too heavy to open above the crew compartment and this also meant that there was a good chance that the escape door would face in the direction of enemy fire.

Kahn was very thorough in one regard with his idea. He seems to have understood that simply towing these balls together was not possible, or at least was unfavorable, due to enemy fire against the unprotected towing vehicles, and consequently, his unpowered towed concrete ball gained an engine. Kahn did not use the term ‘tank’ to describe this adaption though, instead, he used the term ‘self-moving fortress’.
For movement, it was to use a ‘petrol motor… installed inside with both ends driving a geared cadran or V grooved cadran, with single disengaging drive”.
It is hard to envisage how in the relatively small space provided such a motor would power such a heavy ball across even hard ground, let alone on soft ground, and despite this being, in effect, a ball-shaped tank, it was supposed to drive two internally mounted, circumferential and parallel toothed gear wheels with the motor fixed to a stationary platform so as to drive the gear wheel. Kahn does, later in his letter to the Ministry, describe that the engine could also be a diesel unit. To steer the ball, the drive from the engine was switched from either driving both toothed wheels or to one, which would impart an uneven force on one side of the ball steering it in the opposite direction. Vision was provided by a periscope sticking out of each end of the axle.
The whole idea of this ball-shaped tank was poorly conceived, albeit well-intentioned. The idea was, perhaps, unsurprisingly rejected as impractical by the Mandatory’s authorities on behalf of the British Ministry of Supply.

It is worth noting that Kahn’s other suggestions for weapons to the Mandatory’s authorities also met the same level of success as this ‘ball fortress’. Examples of these were electrified shells and electrical landmines to electrocute tanks; an electrified wire carpet to entangle and electrify tanks; concrete escort boats to protect convoys from enemy torpedoes; the fitting of propellers to the sides of ships spinning at 5,000 to 10,000 rpm to break up torpedoes before they hit; These all fell on deaf ears as ideas, as did his idea for a sound-induced death ray for destroying enemy submarines; an infrared morse code apparatus; a tethered shell for shooting down planes; and a tailless fighter aircraft. The Ministry of Supply evaluated all of these ideas as well and all were considered to add nothing new to knowledge and therefore rejected.