The United Arab Emirates (UAE) was the only nation that bought the Italian OF 40 (OTO-Melara/Fiat 40 tonne) tank in the 1980s. They first bought the Mk.1 and were not pleased with the vehicle leading to a further delivery of Mk.2 vehicles and upgrading of the Mk.1 to Mk.2 standard very soon afterwards. Even so, these tanks were not considered mobile enough nor sufficiently well armed by the UAE for their envisaged role in the Middle Eastern battlespace. Ultimately, the UAE was left with an undesired stock of tanks and OF 40 based armored recovery vehicles (ARV’s). The UAE, already operating the much more advanced, better protected, and better armed Leclerc MBT, did not need these older vehicles. Despite rumors of these vehicles being sold to Bosnia-Herzegovina as surplus in the late 1990’s they instead appear to have simply been put into long-term storage in the Gulf nation.
The UAE did, however, operate a number of BMP-3’s which, despite being well armed, were not well armored which led to the search for a suitable replacement for them. 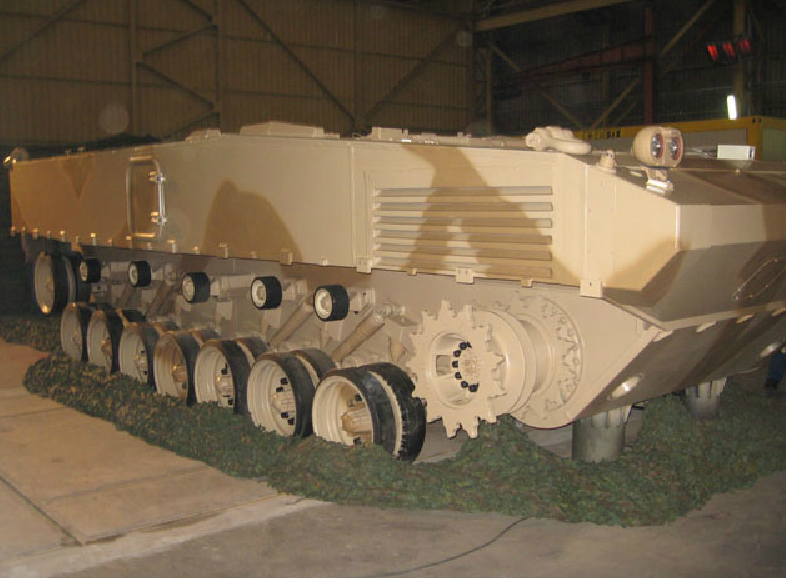 OF 40 based Sabiex HIFV showing the substantially altered profile of the vehicle. Source: Al Badie Group 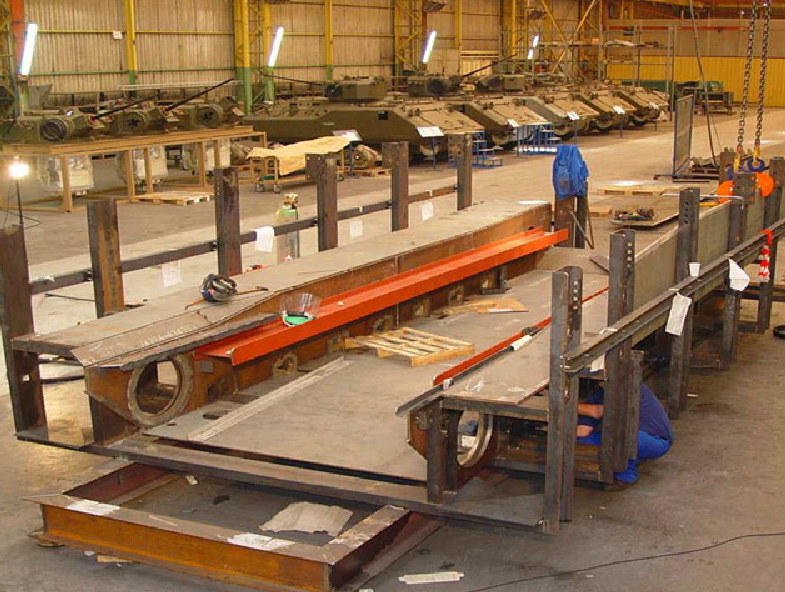 Hull development at Sabiex’s Belgian plant. The hull has been totally stripped off and a new improved mine resistant floor is being added. Old features like the driver’s floor hatch from the OF 40 are eliminated. Source: Al Badie Group 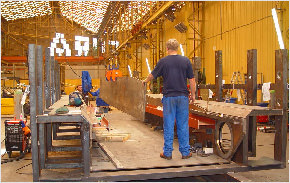 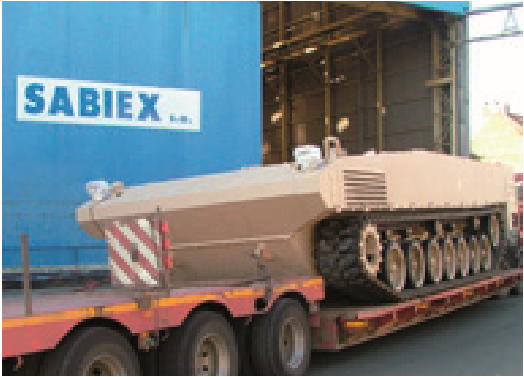 Sabiex OF 40 based HIFV leaving the Sabiex plant in Belgium – Source: Sabiex.com 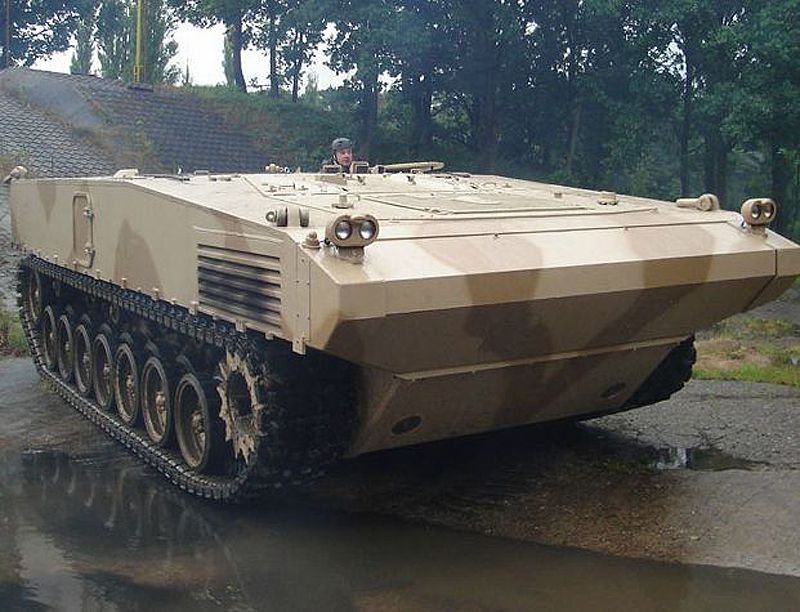 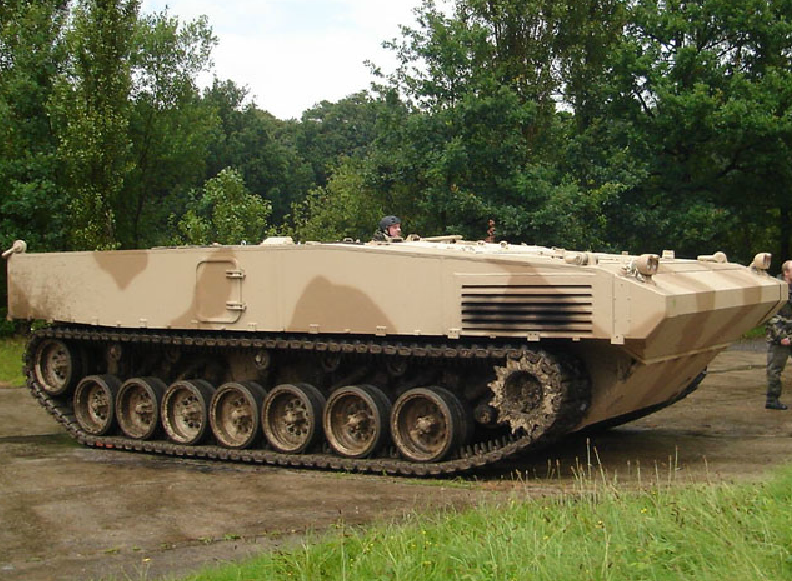 Sabiex HIFV during trials in Belgium in 2007. The position of the driver gives a good idea of the problems of driving a vehicle with such a large frontal blind spot. 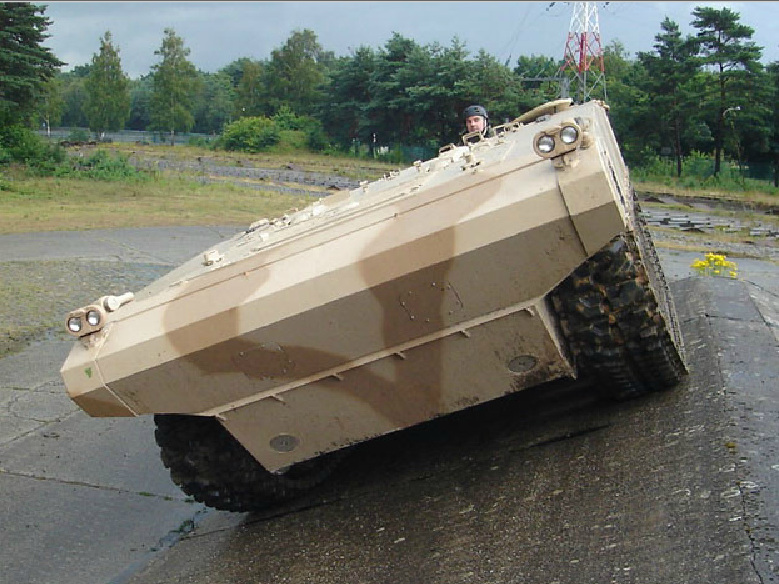 By 2005, a possible new role for the OF 40 tanks was found. The Belgian firm of Sabiex International, based in Tournai, received a €12 million (euro) (US$15.8 million) contract from the UAE to reuse components of the OF 40 during the development and evaluation phase of their own IFV/APC program. Also involved in this joint-venture were the South Technology Company (STC) along with the Al Badie Group (ABG). STC specialise in engineering, upgrading, addition armoring (including landmine protection) and optronics.
The purpose of this new vehicle was to replace the existing UAE BMP-3’s fleet. The result of the STC/Sabiex/ABG venture was something rather unusual. The goal was the construction of a prototype Heavy Infantry Fighting Vehicle (HIFV) which saw one OF 40 shipped to Sabiex in Belgium, dismantled and refurbished. The new prototype vehicle was partially completed in 2007, sufficiently for trails in Belgium to take place. The development work was done by 2010 and the completed vehicle shipped back to the UAE for desert trials. In the UAE, this vehicle is officially known as ‘the Golden Unit’ as a test prototype and, having passed its desert trials, was to then to proceed to 2nd stage development by STC. This further conversion work based on the Sabiex development was planned to take place at the production facilities of ABG in UAE, but had not started by mid-2010. 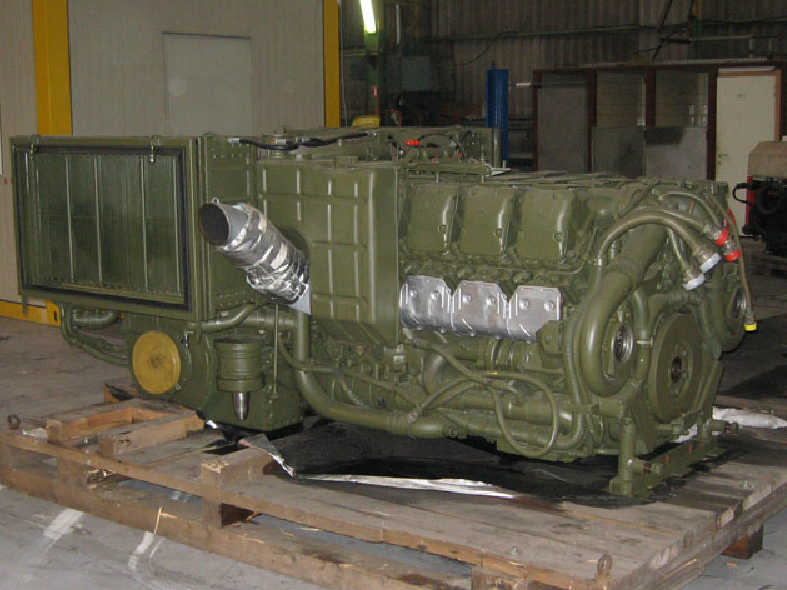 OF 40 MTU power pack reconditioned for use in the Sabiex HIFV. Source: Al Badie Group

The OF 40 was a conventionally laid out tank with the Fiat-built (licensed) Motoren und Turbinen Union MB 838 CA M500 supercharged, liquid cooled, ten-cylinder multi-fuel diesel engine producing 830hp. The engine, transmission and drive were at the rear. The basic dimensions of the original OF 40 hull were retained as was 7 roadwheel layout with each pair of double wheels mounted onto a swing arm and torsion bar with hydraulic shock absorbers at the front and rear wheel stations.
The Sabiex design saw the reversal of the vehicle layout. The original OF 40 MTU type power pack was retained but now sat at the front of the vehicle allowing the rear to be converted for infantry use. Additionally, the placement of the engine in the front of the vehicle allows for additional protection over the frontal arc. This concept has been tried elsewhere with other tanks such as the Centurion in Jordan being reversed and turned into the Temsah. The only modification done in UAE other than adding the BMP-3 turrets appears to be some work on the exhaust louvers which are reduced from 5 to 3. 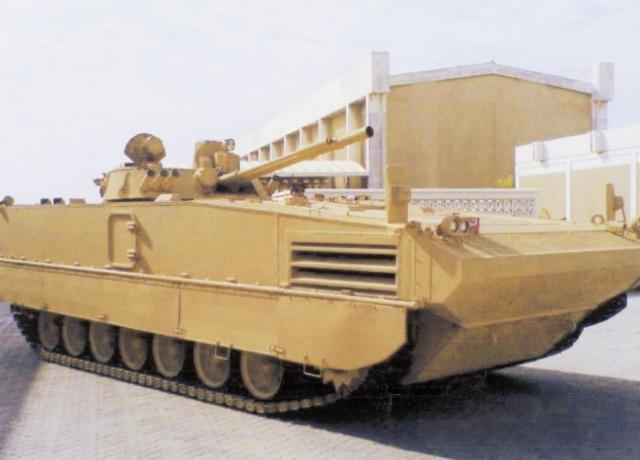 Sabiex HIFV fitted with BMP-3 turret in the UAE. The modified exhaust louvres can be seen.

Illustration of the Sabiex HIFV, or ‘The Golden Unit’. Produced by Yuvnashva Sharma, funded by our Patreon Campaign. 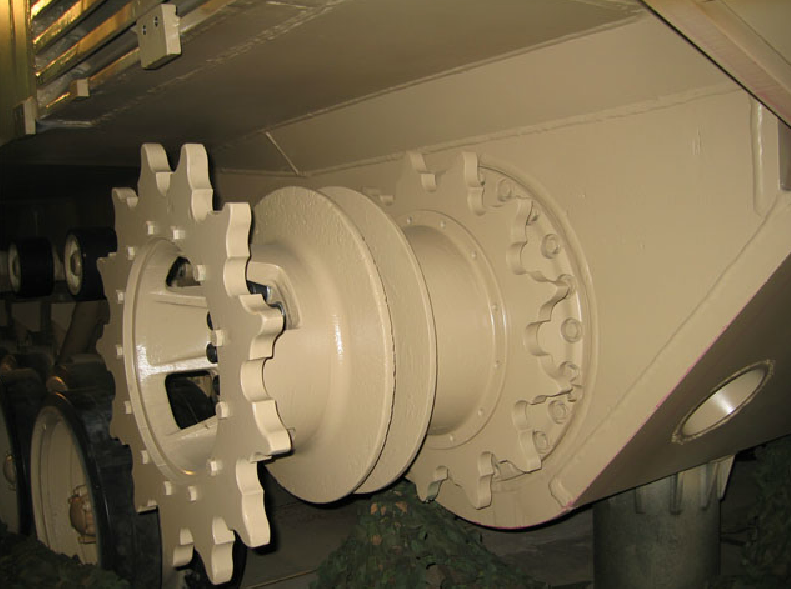 Close up of the drive sprocket from the Sabiex HIFV also shows the thickness of the front lower plate of the vehicle’s armor.

The vehicle is still made from all-welded steel armor for the hull and Sabiex claim protection is provided to STANAG 4569 level 5 with additional protection against the Russian TM-57 anti-tank mine. Significant additional protection has been added internally with a new inner armored bulkhead providing the whole of the sides with spaced armor. Significant additional protection on the floor of the vehicle is also provided with the elimination of the old driver’s escape hatch in the floor and a new floor put in place. The front lower part of the vehicle appears to be made from an outer layer of ~40 mm thick armor plate, and the nose is assumed to consist of a large section of spaced armor. 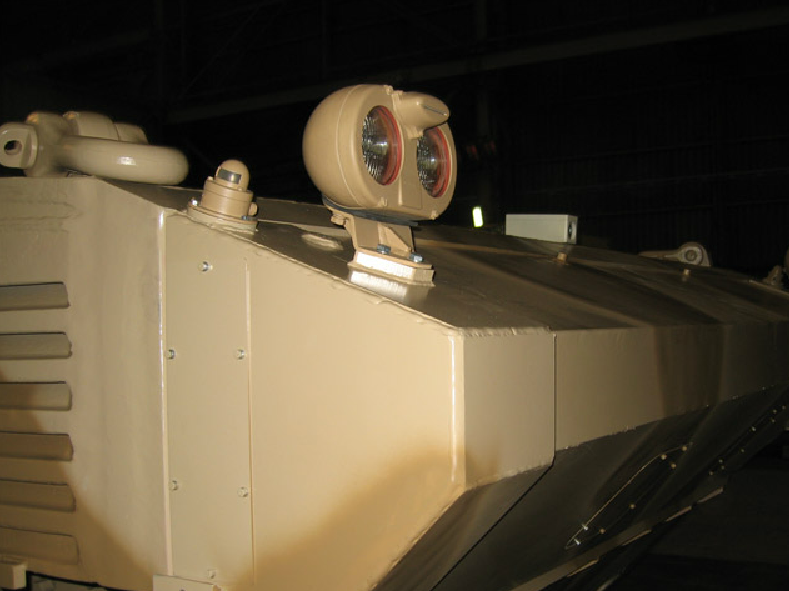 Detail of new nose armor which has had the OF 40 headlamps (M60 style) fitted to it. The driver’s digital video camera driving aid can be seen behind it (the small whitish rectangle). Source: Al Badie Group 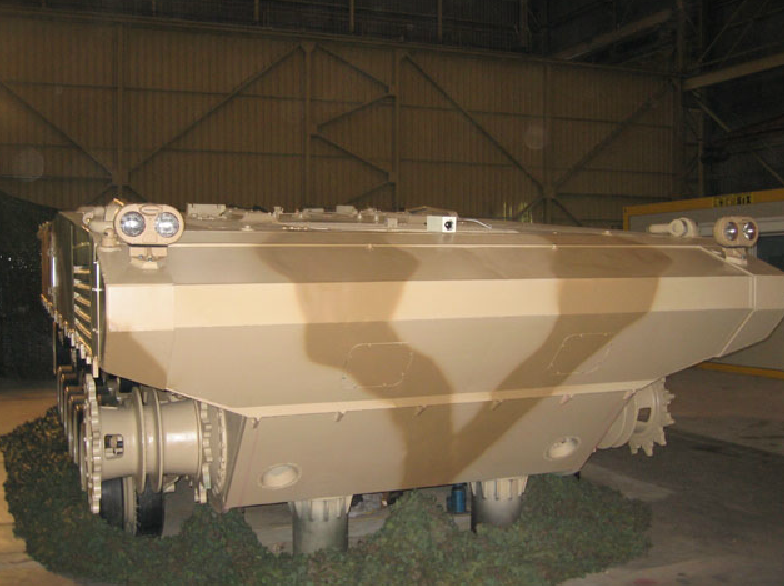 Front view of the Sabiex HIFV hull in its two-tone desert camouflage pattern. This was later changed to an all- sand-yellow scheme in the UAE

The only information relating to armament is that the prototype was shown fitted with a surplus turret from one of the large number of BMP-3’s operated by the UAE. That BMP-3 turret is fitted with a 100mm 2A70 main gun, a 30mm 2A72 coaxial autocannon, and 7.62mm PKTM coaxial machine gun.
Had the program gone ahead, the Golden Unit would have been one of the most heavily armed and armored HIFV’s in the world. 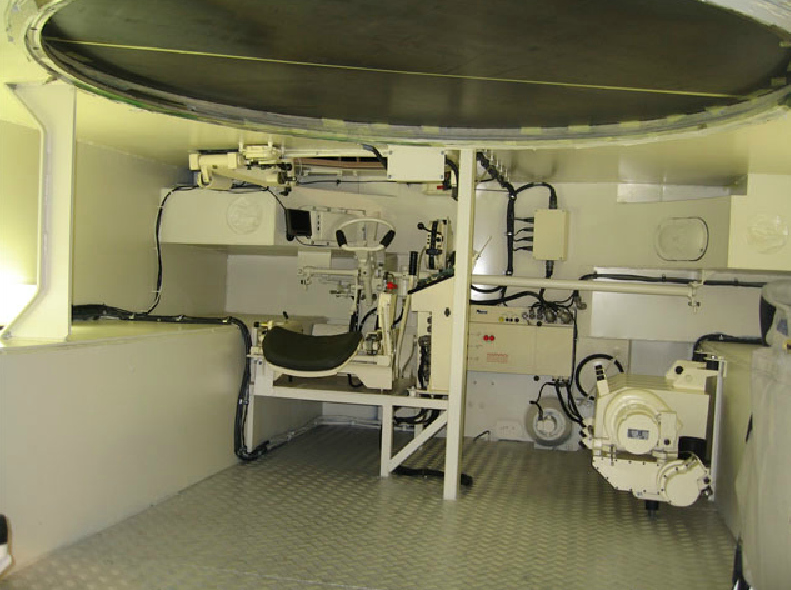 Drivers station seen from inside, looking towards what used to be the bulkhead between the fighting compartment and the engine bay. A turret is not fitted and the new flooring over the improved mine protected floor can be seen. Source: Al Badie Group 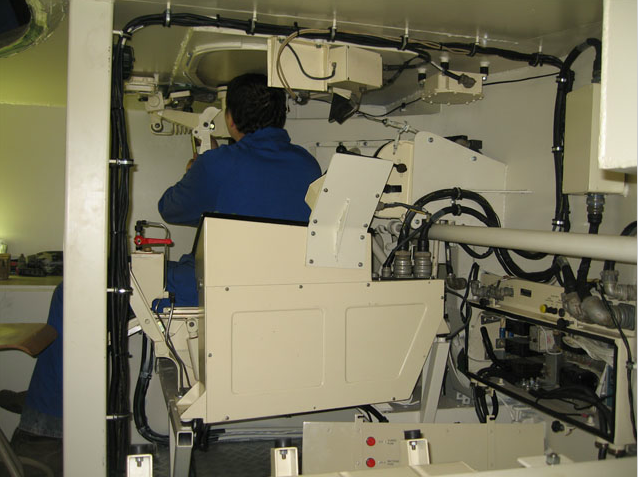 View of the right-hand side of the driver’s position during construction. The front of the vehicle is to the right and not the direction in which the fitter is facing or seated. Source: Al Badie Group

The Sabiex design called for a crew of just two, a driver who sat in the front left of the fighting compartment and a commander/gunner. Without the turret fitted, there is a large central space between the back of the driver and the four infantry seats, which could be used for a variety of purposes but, even with the turret fitted, the four rear seats remain. This would allow for up to 5 additional crew members with one assisting in the crewing of the BMP-3 turret. This would bring the maximum complement up to 2+5 with a turret. Access to the vehicle for the driver is via his own hatch but the infantry accesses the vehicle via the large power-operated rear ramp or the rightwards opening single door within the ramp. A rectangular hatch in the side of the right-hand side of the vehicle and other features include small video cameras at the front and back to assist the driver. 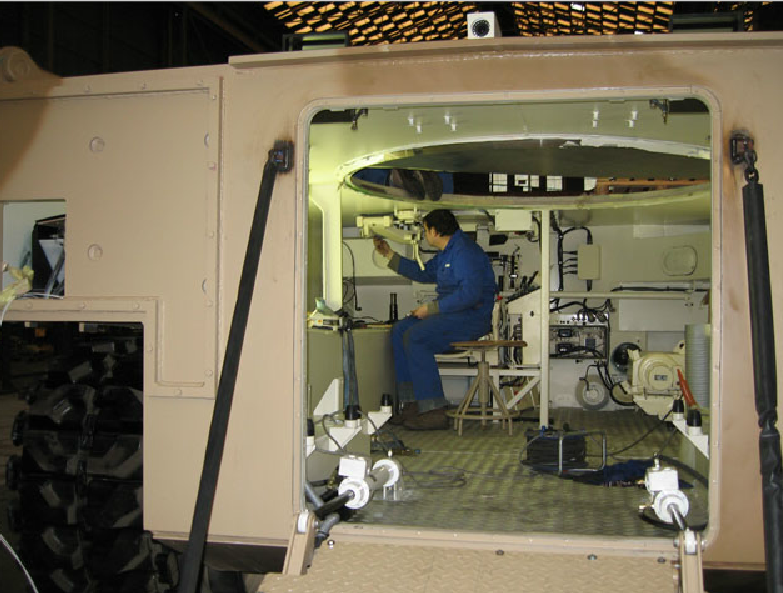 View inside the Sabiex HIFV through the rear boor shows the thickness of the substantially improved floor to be mine resistant. Source: Al Badie Group 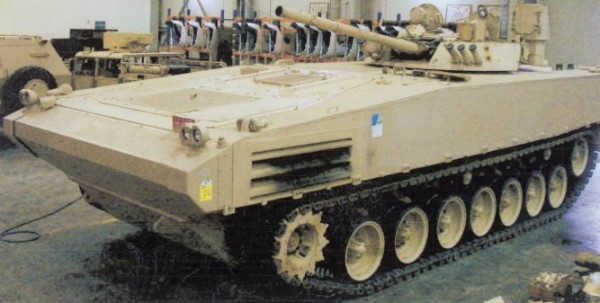 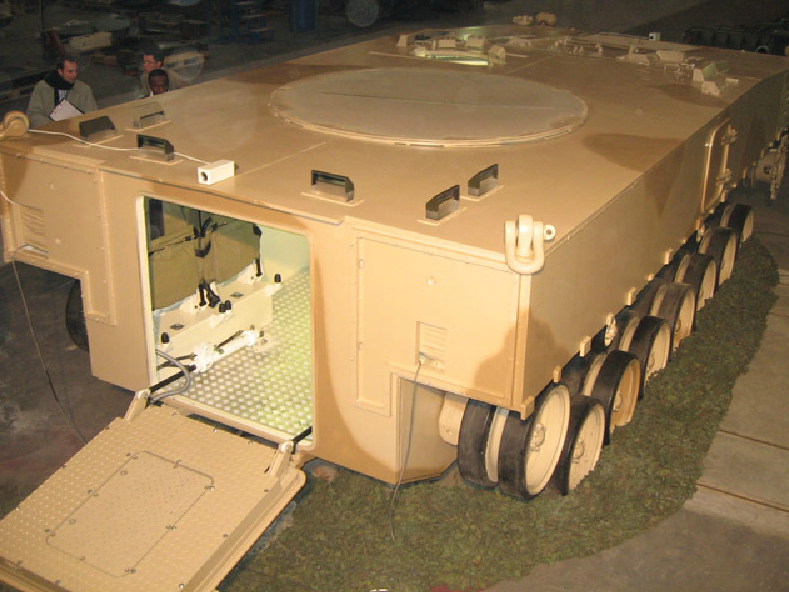 Elevated rear view of the Sabiex HIFV showing the considerable bulk of it. Two of the four infantry seats can be seen folded on the left. Source: Al Badie Group

The program began in 2005 and trials were conducted in Belgium in 2007. Further trials were conducted in 2010 in the UAE with work on converting the remaining OF 40 vehicles scheduled to commence at the ABG production facilities but never did. Following delivery of 436 Leclerc MBT and variants to the UAE from the French firm of Nexter Systems, all remaining OF 40 vehicles are officially withdrawn from service. Only one OF 40 is known to have been modified and the status of the program appears to be canceled. The status of the test vehicle is not known but is assumed to be in storage in the UAE. The Golden Unit as a prototype was successful and if the remaining stock had been converted, the UAE would have had a very well armed HIFV. 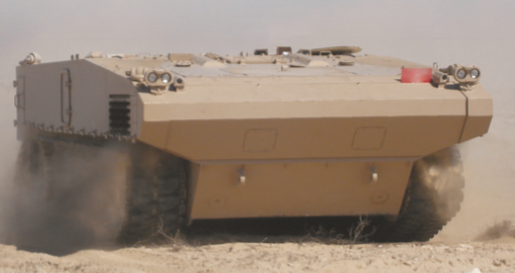