In 1942, the American Studebaker company based in South Bend, Indiana, famed for their luxury automobiles, answered a call for an armored vehicle capable of traversing deep Norwegian snow drifts for special forces operations. The vehicle became the M29 Weasel and went on to be a popular universal vehicle outside of its original intended use, akin to the British Universal Carrier. The M29 could traverse the hardest of terrains where wheeled vehicles could not go and saw service through the Second World War, the Korean War, the Vietnam War and saw use in the civilian sector. 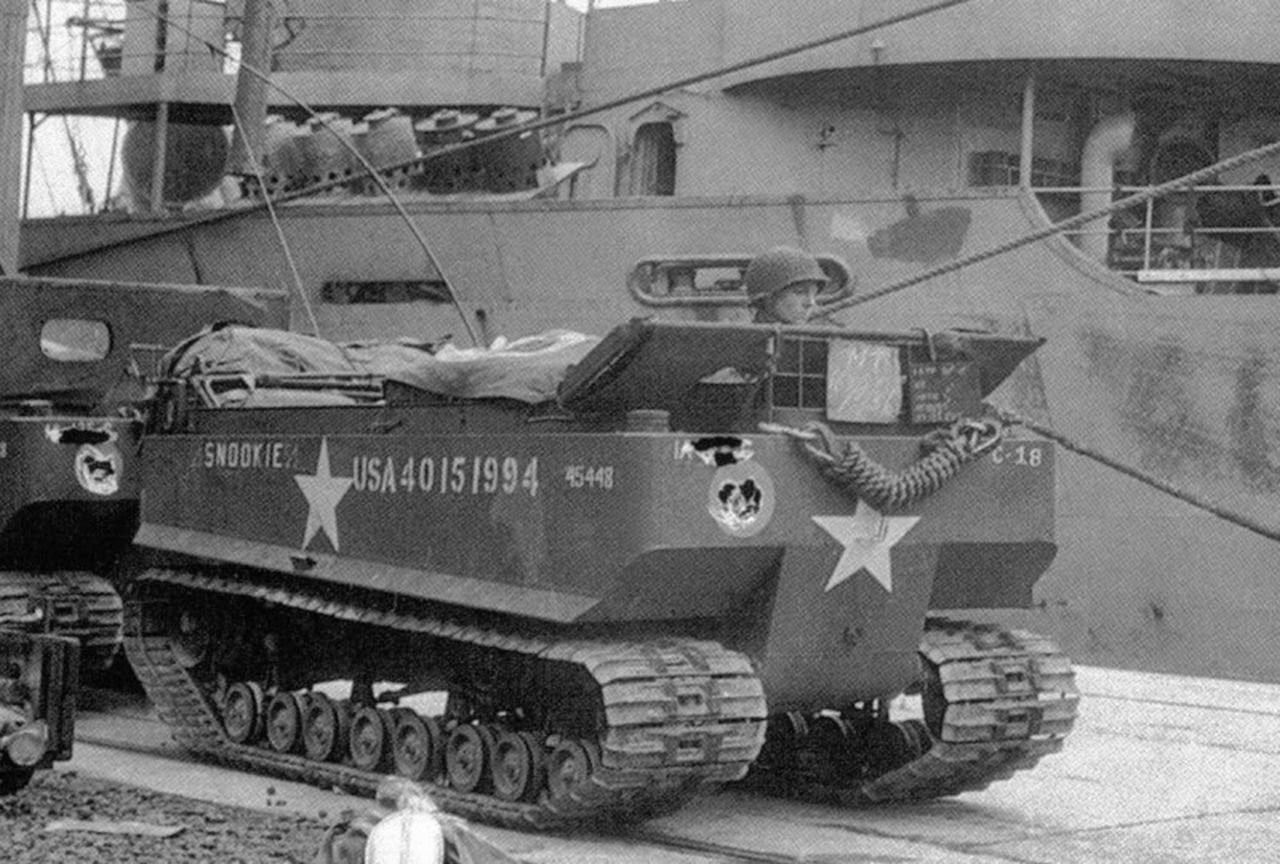 The idea for the Weasel came from the British Inventor Geoffrey Pyke, a man famed for his unorthodox methods. His most famous invention was Pykrete, a material that would’ve been used for the Habbakuk iceberg aircraft carrier. Pyke had long planned for Commando assaults on German power plants and industrial areas in Norway and also planned actions to interrupt the Nazi atomic weapons program in Operation Plough. Operation Plough is very much the origin of the Weasel. Pyke called for a small, lightweight and fast vehicle, able to transport small teams of men across deep snow to take them deep into enemy territory. 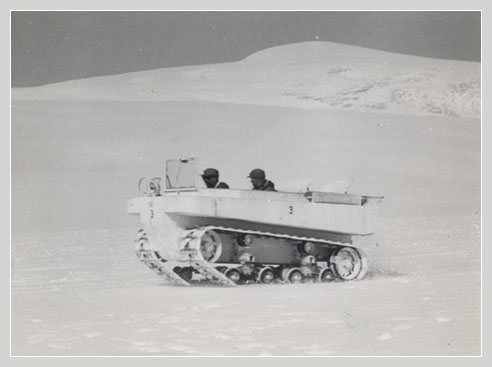 The proposed design was designated T15, with the finalized design receiving T24. It was soon accepted and became the M29, a simple vehicle consisting of little more than a box on tracks. The Studebaker company would go on to build almost 16,000 M29s. Key elements of its design required that it be air-transportable, able to withstand the impact of a parachute drop, and able to carry enough supplies for a small commando team. It was powered by a 70 hp Studebaker Model 6-170 Champion 6-cylinder engine which propelled the vehicle to 36 mph (58 km/h), a speed it could sustain over most terrain types.
Suspension for the M29 consisted of rear mounted drive wheels (and transmission) with idlers in the front that were lower, giving the running gear the appearance of leaning forward. It featured four, two-wheeled bogies on each side, with two track return rollers. It had wide tracks from 15″ (380 mm) to 20″ (510 mm). This gave the Weasel a very low ground pressure of just 1.9 psi (Pounds Per Square Inch)a benefit in crossing soft ground. The tracks consisted of long metal plates connected by inner rubber bands, with a total of four bands per track, two on the outer edge and two in the center with a center guide horn. The bogie wheels ran on the center bands and. the outer face of the tracks featured two rubber blocks per link for grip on road surfaces. 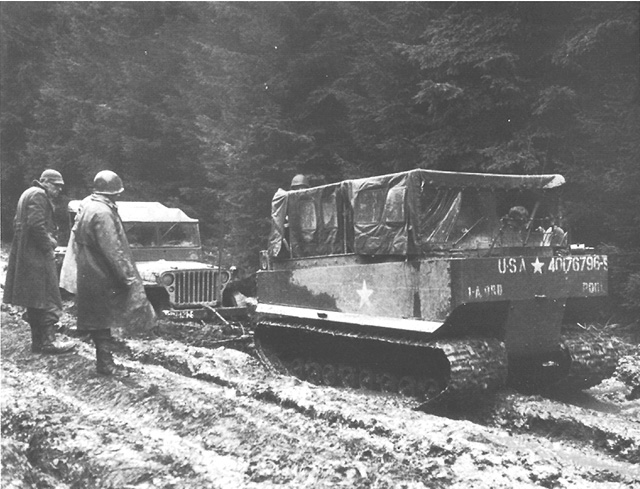 A Weasel freeing a Willys Jeep from thick mud.
The M29 was operated by one driver and could carry three passengers. The driver was positioned in the front left with the engine compartment to his right and a row of three seats in the rear for the passengers. Though officially an unarmed vehicle, Browning M1919 .30 cal or .50 cal M2HB Machine Guns were often mounted for some form of offensive/defensive capability.

The M29C was the main variant of the Weasel. The M29 was already partly amphibious, able to traverse shallow and calm waters such as rivers and streams, but could not operate in rough, sea like waters. The M29C amended this issue, with the addition of buoyancy aids in the rear of the hull as well as two rudders. Removable pontoons were also added to the front and rear and changes were made to the treads of the track links to allow it to propel itself in water, although it was very slow. This still didn’t make the M29 capable of seaborne amphibious landings, but allowed to be more stable in deeper or slightly rougher inland waters. 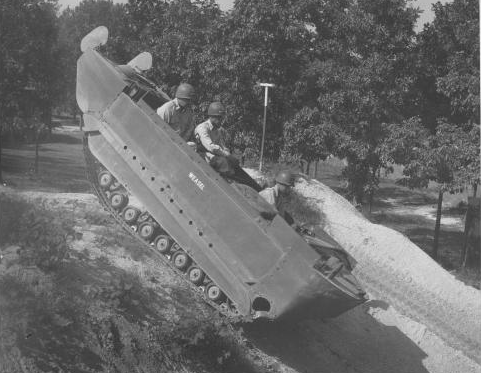 The M29C Water Weasel during testing. 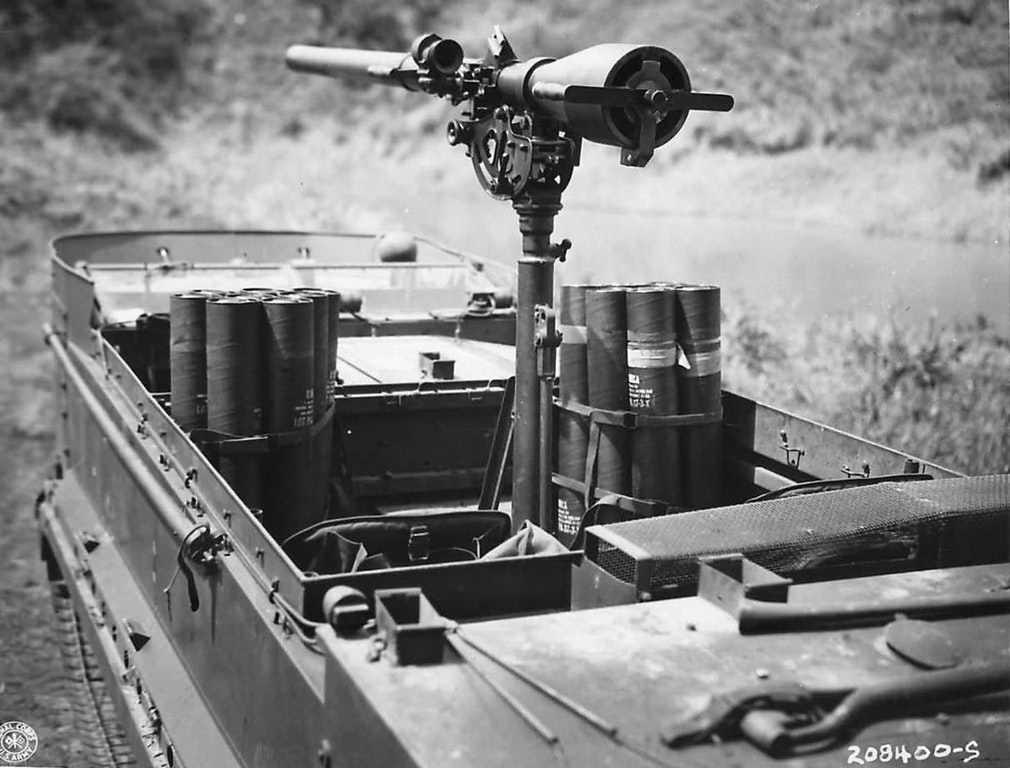 A Water Weasel armed with a 75mm Recoiless Rifle. Photo: TankPorn of Reddit 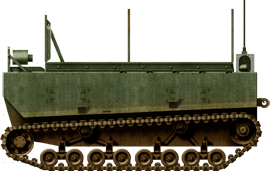 The amphibious M29C Water Weasel. Both illustrations are by Tank Encyclopedia’s own David Bocquelet.

The Norwegian mission that the M29 was designed for never took place. This did not mean that time had been wasted on the vehicle, as it soon found use in multiple roles, in multiple theaters, and by multiple countries. 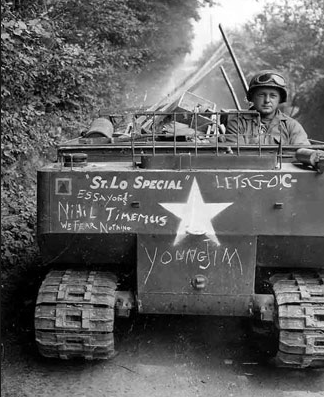 An American Weasel in Normandy, 1944. Photo:WW2 in Color
The United States used the vehicle extensively during World War Two. It was used in Italy, the Western Front, and even in the Pacific. It saw action during the Normandy landings, St. Lo, and the Battle of the Bulge. It proved its usefulness at the engagements on the Ruhr and Rhine, where it was able to cross the thick, sticky river mud. In the Pacific, it was used by the United States Marine Corps (USMC) at Iwo Jima and Okinawa, where it proved capable of crossing loose sand, and the harsh tropical island terrain where the Marine Corps’ jeeps wouldn’t dare venture.
The use of the M29 Weasel as a universal vehicle soon became clear to the Americans. They used it regularly as a light troop carrier and cargo hauler, and also as a mobile command center, ambulance, and to lay telegraph wires. One of its major attributes was its ability to cross minefields, as its low-ground pressure was often not enough to trigger the anti-tank mines. The ground pressure was still more than enough to trigger anti personnel mines which could easily split a rubber track. 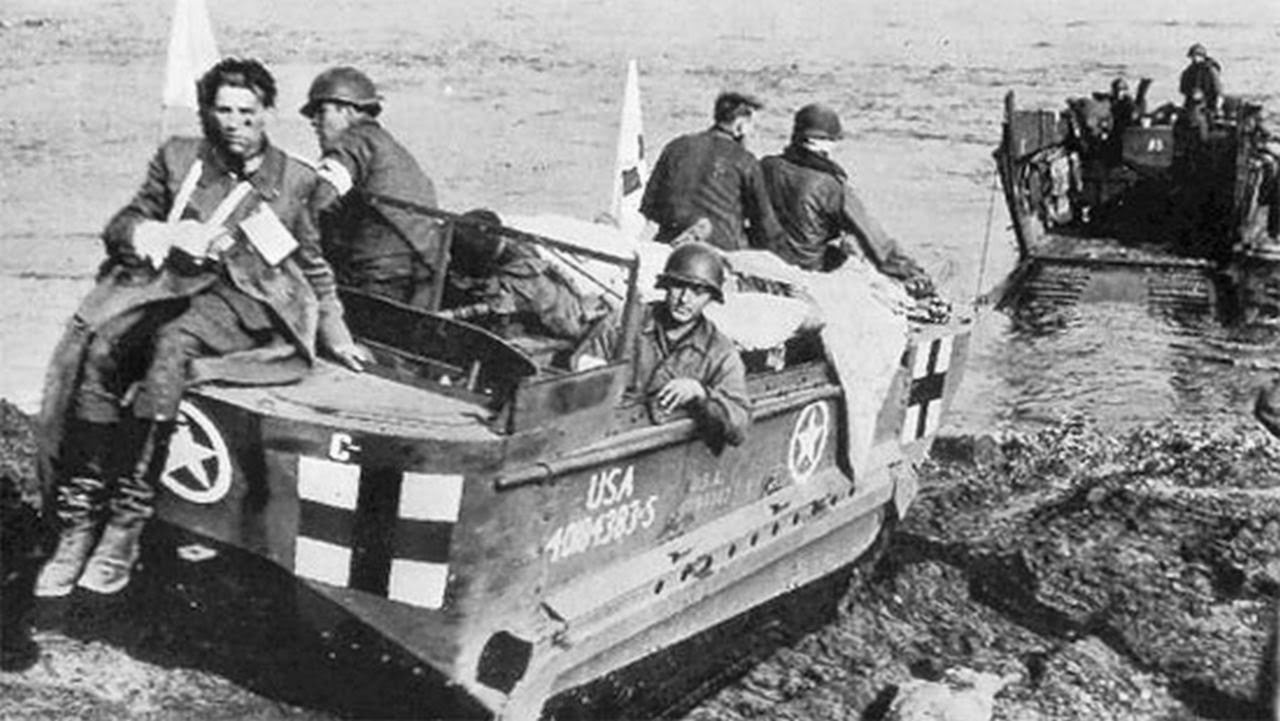 An M29C in an ambulance role on the Rhine

Service in the Commonwealth

The British and Canadian armies also used the Weasel in World War Two. Supplementing a number of LVT Buffalos, M29C Water Weasels of the 79th Armored Division were used by Commando troops in the Walcheren Operation. The 79th also used a number of the standard M29s to clear mines and other defensive devices.The Canadians made use of the Weasel’s semi-amphibious nature in their engagements in the flooded estuaries of Antwerp in 1944, and would go on to serve them through the Netherlands and into Germany. 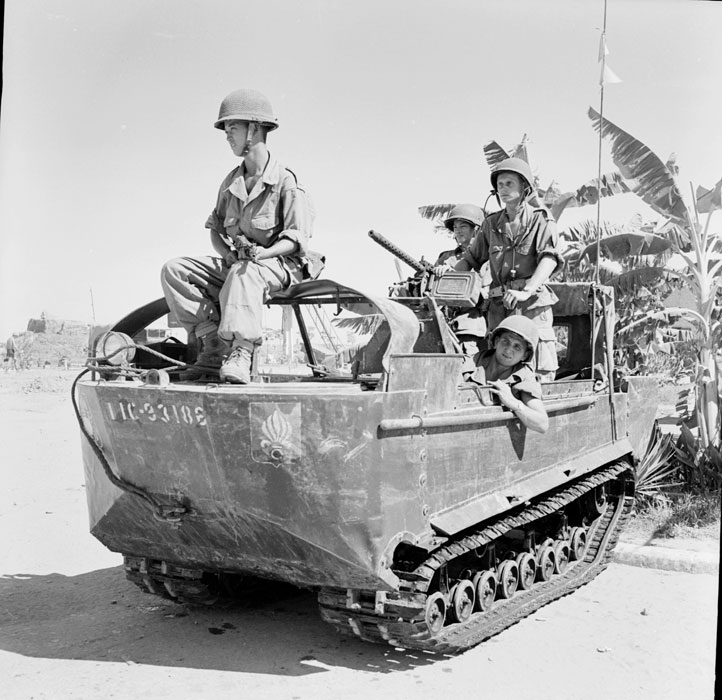 French M29C in Vietnam
In 1947, the French Army used the M29 in the First Vietnam war, where the 1er Régiment Étrangers de Cavalerie were equipped with the M29C variant. They armed them with multiple types of weapons, from the Chatellerault M1924/29 and Browning M1919 machine guns to 57mm recoilless rifles. The M29 would remain in service with French mountain troops and Gendarmerie as late as 1970.

With a large surplus supply, the United States sold off large quantities of the M29 to various countries, including Sweden, France and Norway. Many Weasels served in scientific Arctic expeditions, but their most famous use in civilian hands was at the 1960 Olympic Winter Games at Squaw Valley, California, USA.
The Automotive Company, Consolidated, sought to update the Weasel in 1960. They designed the ‘Sno T’rrain,” which was two Weasel chassis coupled together with fully enclosed canopies.
Today, there is a large community of Weasel collectors and restorers. As such, there are many running examples in private collections world wide.

A unique unit was raised to execute Project Plough, the Canadian-American 1st Special Service Force
“The 1st Special Service Force (also called The Devil’s Brigade, The Black Devils, The Black Devils’ Brigade, and Freddie’s Freighters),[1][2] was an elite American-Canadian commando unit in World War II, under command of the United States Fifth Army. The unit was organized in 1942 and trained at Fort William Henry Harrison near Helena, Montana in the United States. The Force served in the Aleutian Islands, and fought in Italy, and southern France before being disbanded in December 1944.
The modern American and Canadian special operations forces trace their heritage to this unit. In 2013, the United States Congress passed a bill to award the 1st Special Service Force the Congressional Gold Medal.[3] ”
https://en.wikipedia.org/wiki/First_Special_Service_Force#Project_Plough

It is essentially a tankette applied for logistics. This is really underappreciated type of an vehicle.

Was the Weasel armoured? I have seen it called an armoured vehicle but do not think this is the case?
Your metric and imperial dimensions do not tally, BTW.

I have one of these, my dad used it to feed cow in the winter time!
Could be for sale at the right price!