A Need for Firepower

In early 1943, a General Staff specification was issued for a tank mounted flame projector for use by Australian units in the Pacific. Plans were submitted for a cordite based flamethrower designed by Major A.E Miller, the commanding officer of the Australian 2/9 Armoured Regiment Workshop, but no action was taken to develop the design. A separate Matilda II mounted design utilizing compressed air propellant was produced by the Munitions Supply Laboratory under the designation of ‘Flamethrower, Transportable Aust No. 1 Mk I’. The flamethrower was tested but with an unsatisfactory range of 14-19 yards (13-17 m). In November 1943, a panel including Major Miller was formed to investigate potential new designs for a tank based flame projector. On January 7, 1944, a new requirement was issued for a flamethrower mounted in the turret of a Matilda II infantry tank, with the design to be completed by February 7, 1944. The working design was a cordite based flame projector refined from Major Miller’s original design, however, it required fabrication of components which would extend completion past the deadline.
Major Miller proposed an alternative design based on a hydro-pneumatic cylinder which could be fabricated from available components and was approved, with a budget of 250 pounds. The new system utilized an electrically powered hydro-pneumatic piston to generate pressure for the flame projector and a prototype designated ‘Frog’ was completed on February 21, 1944. The prototype Frog was tested on April 2, and a refined system was approved for production of 25 units. Major Miller was transferred to the Master General of Ordnance (MGO) branch to oversee design and production. The first tank was delivered by July 22, 1944, and successfully demonstrated to the Commander of the Australian Military Forces, General Thomas Blamey, at Monegeetta Proving Grounds on July 26. The production flame tank was officially adopted under the name of ‘Flamethrower, Transportable Frog (Aust) No. 2 Mk I’, but is more commonly known as the ‘Matilda Frog.’ 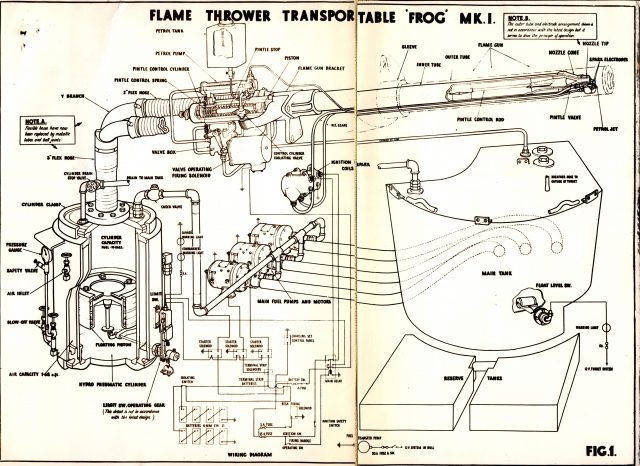 Diagram of the major components of the ‘Frog’ flame system. Source: The Australian War Memorial

The flame projector on the Frog replaced the Matilda’s standard 2-Pounder (40 mm/1.57 in) main gun. The flame projector was encased in a mild steel tube designed to resemble the 3-inch close support howitzer, but fitted with a counter weight near the end of the barrel for balance. The hydraulic traverse of the regular gun tank was retained and a new hand cranked chain-sprocket mechanism was affixed to the turret roof to control elevation. The coaxial BESA machine gun was also retained although the bulk of the flame projector made loading and servicing the weapon in combat extremely difficult. The most novel feature of the flame projector was the electrically powered hydro-pneumatic cylinder which generated pressure for the weapon instead of the more conventional cordite or compressed gas.
The hydro-pneumatic cylinder was comprised of a floating piston contained within two nested steel cylinders. During operation, fuel was electrically pumped into the inner cylinder, pushing the piston down and triggering a limit switch. Simultaneously, the air in the outer cylinder was pressurized by the depression of the piston, charging the weapon to fire. At full retraction, the inner cylinder contained 10 gallons of fuel. Firing the weapon released a pintle valve, allowing the pressurized air in the outer cylinder to expand and force the piston upwards, thus discharging the stored fuel through the projector barrel. A foot trigger controlled the release of fuel from the pressure cylinder while a thumb switch on the traverse controller was responsible for triggering the electrical igniter located at the end of the barrel. Releasing the foot trigger or expenditure of the stored fuel activated the fuel pumps and re-primed the system.
Much of the commander and loader positions were replaced by the flame projector’s 80-gallon ‘Geletrol’ fuel tank and the hydro-pneumatic compressor system with the commander’s seat moved and affixed to the pressure cylinder. Geletrol was a locally produced thickened flame fuel produced by adding Aluminum Oleate to petrol, diesel or a petrol-diesel mixture (referred to as ‘Dieseline’). The decreased space in the turret meant that the Matilda Frog carried a crew of only three (driver, gunner and commander). Testing was conducted between August-November of 1944, however, tests were interrupted by the failure of the hoses connecting the hydro-pneumatic cylinder to the flame gun. Metal pipes articulated by ball joints were designed to replace the rubber hoses. Development proved difficult and this upgrade was not satisfactorily implemented until 1945 when Frog tanks were refitted in the Pacific Theater, although it is not known how many tanks were refitted before the conclusion of the war.

Photo of the turret interior of a Matilda Frog, taken from the commander’s cupola facing forward. The fuel tank can be seen towards the front of the turret next to the gunner’s position, with the compressor piston behind it. The system of ball jointed pipes (painted white) normally connects the barrel of the flame projector to the fuel tank and compressor, however, in this instance, the projector barrel has been removed. Source: Batrac 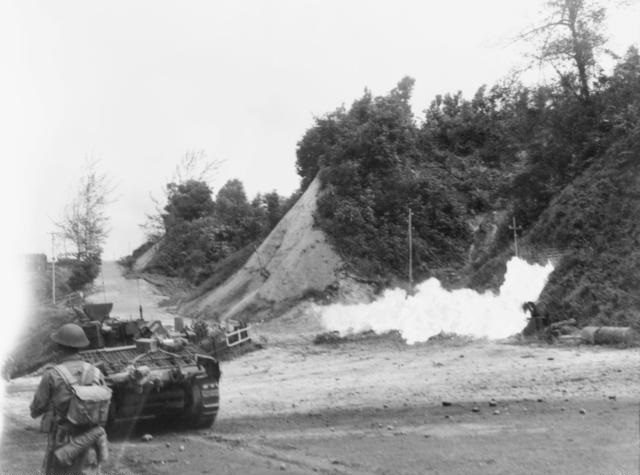 Matilda II Murray FT. Both illustrations are by Tank Encyclopedia’s own David Bocquelet 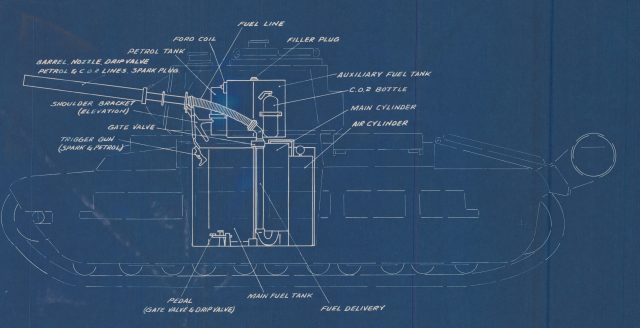 Initial Blueprint of the Hydro-pneumatic system installed in a Matilda II tank (February 1944). Note that the connection from the Pneumatic cylinder to the flame projector is at the bottom of the cylinder as opposed to the production vehicles where it is on the top of the cylinder.  Source: The Australian War Memorial
Unlike the Churchill Crocodile, the flame equipment and fuel storage were entirely stored on board the tank with no need for an external trailer. In addition, there were up to seven additional auxiliary fuel tanks linked into the flame projector’s fuel system, a 100-gallon tank affixed to the rear deck in place of the regular external fuel tank, up to four 32 gallon tanks stowed under the side armor, and two 30 gallon tanks fitted within the stowage boxes on the front of the tank. Naturally, tank crews were less than enthused to have flammable liquid stored in a position exposed to enemy fire and the frontal storage tanks were rarely used in combat.

Closeup photo of a 30-gallon tank mounted in the front stowage boxes, RAAC museum Pucakpunyal, Victoria. Source: BATRAC
The effective range of the Frog was typically 80-90 yards (73-82 m), although it was claimed that 140 yards (128 m) was possible under ideal conditions. The maximum rate of fire was 20 gallons per minute in either two 10 gallon shots or eight 2 ½ gallon shots. With the main gun replaced by the flame projector, a 90 yard range may seem somewhat limiting, however in jungle combat of the Pacific, the typical engagement range was 15-30 yards (13-27 m) which made the Frog more than effective against Japanese positions. 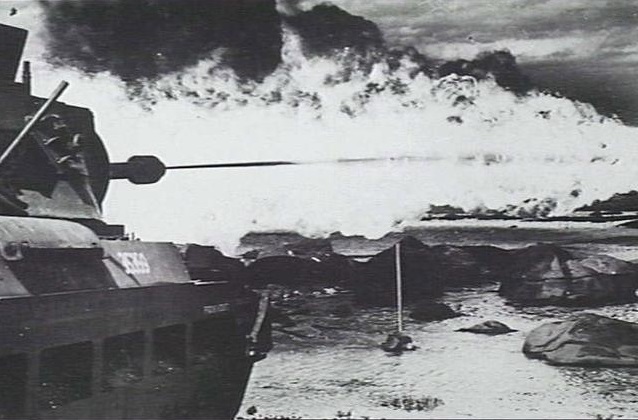 Matilda Frog tank in action. Balikpapan, Borneo, 1945. Source: Australian War Memorial
The Frog was issued to No. 5, 6, 7 and 8 troops of the 2/1 Australian Armoured Brigade reconnaissance (recce) Squadron and operated successfully in Borneo at Tarakan and Balikpapan (Operation Oboe 1 & 2) and at Labuan/Brunei (Operation Oboe 6). Although the Frog performed satisfactorily, the use of a compressed air system to propel the flame meant that a waiting 30 seconds was required between bursts (10 gallon shots) while the system built up sufficient pressure. This, along with the substantial bulk of the system, was considered workable although less than desirable.
In 1944, seeking to improve upon the weaknesses of the Frog, a modified system was developed utilizing cordite charges as a propellant for the flame projector. The system was a continuation of Major Miller’s earlier cordite based designs which used components from the ‘Breeze’ percussion starter on the diesel engine of the M3 light tank. This system generated pressure by using the expanding gases from a cordite charge to impinge on a piston in the flame projector’s fuel chamber. The use of cordite resolved the delay between firing shots and also extended the range of the weapon beyond 100 yards (90 m). The more size efficient nature of the cordite system also allowed for the turret fuel tank to be increased to 130 gallons. The cordite system was designated ‘Murray FT’ and, although completed, did not enter service before the conclusion of the war.
In total, 25 Matilda Frog tanks were built.  The Murray FT was constructed as a prototype in 1944 and tested throughout 1944-45 with the intention of replacing the Frog, although, with the conclusion of the war, production was never completed.

One reply on “Matilda Frog and ‘Murray FT’ Flame Tank”

What a brilliant site – I wish I’d found you YEARS ago!