The “Tanque Barbastro” is an unofficial name for a handcrafted light tank built by local (not government) initiative early in Spanish Civil War. The first and only completed tank was an improvised design, but production of several more was sanctioned when the project was raised with government officials. Large in size, but poorly armed, poorly armored, and suffering from a bureaucratic mess, their combat value, if any even saw combat, was probably limited. There are only two known photos of the mysterious prototype tank, and all four vehicles have an unknown fate; but they were all likely scrapped before the war’s end.

The Barbastro’s design was rather pachydermic and rhombus-shaped, with the driver’s compartment apparently raised quite far off the ground. The vehicle featured a round but squat (and fully traversable) turret armed with a light machine gun – reportedly a non-Spanish variant of the Hotchkiss machine gun. There were two distinct side hatches on either side of the tank’s fighting compartment for entry of the reported four crew members. Photos show that the first version had “Grupo Construccion Tanques Barbastro” written on the side of the hull, between each of the tracks.

The Barbastro Tank was designed by the Grupo de Construccion Tanques de Barbastro (Tank Construction Group of Barbastro) in the town of Barbastro (northeastern Spain), presumably in late 1936 or early 1937. This was not a government project, and appears to have been built locally in much the same way as the scores of improvised armored cars were built in the early Spanish Civil War. These vehicles were collectively known ‘los Tiznaos’ in Spanish (referring to their grimy appearance – Tiznar meaning ‘to smudge’), and were varied in design. Some were merely trucks with improvised uparmoring of sheets of metal over the original bodywork, others, such as the Constructora Field, had completely new bodywork and turrets.
Design and construction work of the Barbastro Tank was done at the workshop of Constancio Rámiz, which is thought to have been one of the best-equipped workshops in the Huesca province, as crucially, it had turning lathes to make turret parts.
This first version of the Barbastro Tank was built using recycled/salvaged materials; examples include the tracks being taken from an agricultural tractor, the engine coming from an old Ford commercial truck, and the body of the vehicle being made from scrap metal. The vehicle was given a coat of grey paint to make the scrap metal look homogeneous. The turret was fully traversable and armed with a light machine gun, believed to be a foreign-built (IE not Spanish) Hotchkiss machine gun.
There were reportedly four crew members – a driver, commander, and two others (who were presumably machine gunners).
Upon its completion, the vehicle drove to the railway station of the town of Barbastro from the workshop and was sent to Sariñena. Upon arrival, it drove to the headquarters of the Eastern Army. The tank is believed to have been used in the defense of Sariñena, where it was apparently captured in 1938, and later probably scrapped by Nationalist forces shortly after. No information is available on the vehicle’s combat performance.

After the first vehicle’s completion, production of the Barbastro tank was presented to the Ministry of War, who authorized more standardized production of three more Barbastro tanks. However, there were some changes to be made. The new model was to be lighter, to have thicker armor, to feature two machine guns instead of one (one hull-mounted, and one turret-mounted), and to feature a more powerful Ford V-8 engine. It is unclear if the overall shape of the tank would have been much different to the first version.
Instead of improvised armor, real armor plates were used which are reported to be 6.35mm thick (each plate being 12 x 1.5 meters in size). These were made in Valencia, and had originally been intended for gunshields of field guns. These were brought in to the workshop in Barbastro via trucks, and were fixed in place with electric welding points, and rivets.

Production began by assembling the basic lower hull. The engine compartment and the fighting compartment were then given four lateral holes cut in the hull in order to fit the track return rollers and running wheels.
Initially, the three vehicles were built simultaneously, however production quickly became complicated by bureaucracy, leading to two major issues.
The first issue was that the tracks were due to be made in a foundry in Barcelona, and the designers had wanted to use rubber, but due to the circumstances of the war, this was impossible, likely due to a rubber shortage. Therefore, the tracks had to be of a different material – probably some type of metal. However, the foundry workers would not start work without a striking a deal with the Barbastro’s designers. The workers wanted steel in order to reinforce the windows of their headquarters in exchange for building and fitting the tracks. This complicated the construction of the tank significantly, but one tank was eventually sent for final assembly in Barcelona. Whether or not a deal was reached with the workers in Barcelona remains unclear.
The second issue was obtaining engines for the tanks. After long negotiations with a local Ford branch, the vehicles were due to have modern and powerful Ford V-8 engines, but these apparently never arrived. The circumstances around this remain unclear, however, it is reported that the Ford branch in Barcelona (presumably the branch in question) did not start producing V-8 engines until 1939, which is a likely explanation for the issue.
As a result of these two issues, it seems as though the project was abandoned. One tank was sent to Barcelona for final assembly, with an unknown fate. The other two hulls were ready for final assembly (IE, they were missing tracks and engines), but these presumably never left the town of Barbastro.

The Barbastro tank is a mystery of the Spanish Civil War. Sources suggest that all that is known about the vehicles comes from photos, and some recollections from one of the designers of the project that are too scarce to provide a clearer history of the tank. The combat effectiveness of the first version of the Barbastro tank, with its improvised armor, modest armament, and huge size, was probably negligible, and it likely only served as a mobile bunker at the defense of Sariñena. 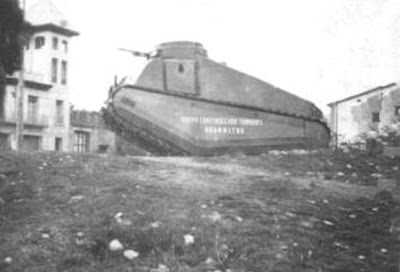 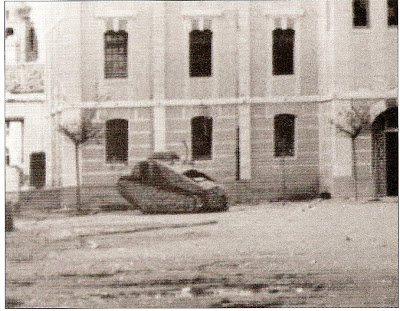 One reply on “Tanque Barbastro”