The Leopard that Never Prowled

The need for a small, fast scout tank in the Wehrmacht had long been overlooked. Light tanks and various armored cars had been pressed into this duty when needed. However an all new tank design was coming up, one that would defeat the heavily armored Soviet tanks such as the T-34 and KV-1. It was decided to develop a new scout tank based off of it.

Work was started on the Leopard by M.A.N. in mid 1941, paralleling the development of, and taking inspiration from, the Panther. At this time, M.A.N. had a contract to produce 5 experimental chassis. Blueprints for a wooden mockup were ready in November 1941. In January 1942, Wa.Prüf. 6 (the governing body for tank development) decided to turn detailed design work on the chassis of the Leopard over to MIAG, and the turret to Daimler-Benz. This would allow M.A.N. to focus work on the Panther, which was needed on the Eastern Front as soon as possible.
It is worthy of note that even before the winning design for the Panther was chosen, work had already been started on the Leopard. Daimler-Benz was developing their own version based on their VK30.02(DB) when M.A.N.’s design was chosen. How far Daimler-Benz’s design was developed, or how it may have looked, is not known.
The VK16.02 was based on experience gathered with its closest relative, the VK16.01, also known as the Panzer II Ausf.J. However, the two tanks are very much dissonant, with the Panzer II Ausf.J being more like the British infantry tank Matilda than a scout tank.

By the end of May, 1942, a full size wooden mockup had been built. Preliminary designs were shown to Hitler in March of 1942. At this time, he was given the following projections: Design work was to be complete by the end of October, and production was to start in April of 1943. Production was to total 105 tanks by the end of 1943, with 150 more in the spring of 1944. On June 4th, 1942, Hitler was again shown designs for the Leopard; a lighter, faster, 18 ton version, and a heavier, and more thickly armored, 26 ton version. He picked the heavier design, opting for increased fordability and heavier armor, while rejecting the idea that 26 tons was too much for small bridges. On July 27th, 1942, MIAG presented Wa.Prüf. 6 with design FKo 252, for the Gefechtsaufklärer Leopard.
The tank had 50 mm (1.97 in) of frontal armor set back at 50 degrees. Side and rear armor was 30 mm (1.18 in), with deck and belly armor of 16 mm (0.63 in). Armament consisted of a 5 cm (1.97 in) KwK 39 L/60, and a single 7.92 mm (0.31 in) MG 42. It was crewed by four men: a driver, a commander, a gunner, and a loader who was also the radio operator. Propulsion was provided by a Maybach HL 157 P engine putting out 550 hp at 3,600 rpm, driving a Maybach OG 55 11 77 semi-automatic gearbox with 8 forward, and one reverse gear. In common with most German tanks, the transmission was at the front. Communication between the crew was done by intercom, and with other tanks by a FuG 2 radio; or a FuG 5 and FuG 7 for command tanks.
In September 1942, production plans for the Leopard were as follows: 1 in April 1943, 3 in May, 5 in June, 7 in July, 11 in August, 18 in September, with production leveling out at 20 per month in October, 1943. At the same time, Hitler had ordered production of 150 tanks per month, as well as all work on the lighter, 18 ton version to be dropped. Albert Speer met with Hitler on October 13th, 1942, to discuss tanks. Speer informed Hitler that troops unanimously preferred the 18 ton design over the 26 ton design. Speer also pointed out that the 26 ton Leopard was barely different from the Panther, and at that point why wouldn’t they just use the Panther as a basis for a scout vehicle. Hitler agreed that the 18 ton (which at this point was already 22 tons) Leopard could be produced, as long as the role of heavy scout tank could be filled with a Panther variant. On January 3rd, 1943, Hitler decided the Leopard would be dropped, as its armor and armament did not meet specifications that would arise in 1944. 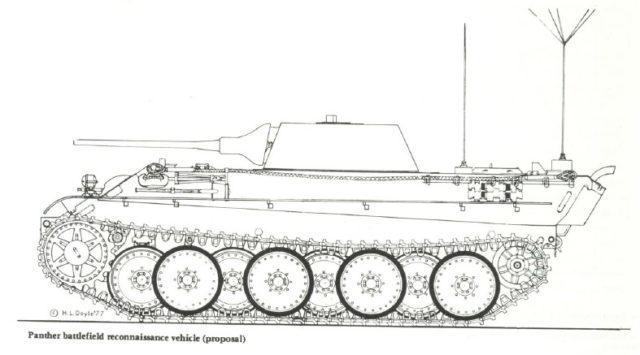 The Panther-based scout vehicle, known as the Aufklärungspanzer Panther, never made it past the design phase. For the rest of the war the only dedicated scout tank to be produced was the Panzer II Ausf.L Luchs, though this was still seen as a stop-gap design. The only physical contribution that came of the Leopard design was the turret; it appears a modified version of Daimler-Benz’s Leopard turret was used on the Sd.Kfz.234/2 Puma armored car. Although there is no documentation to back up that fact, the Puma’s turret is nearly identical to the Leopard’s turret; the only difference being the sides of the turret on the Puma were angled at 20 degrees, compared to the Leopard’s 30.

Two vehicles were based on the Leopard’s chassis, a Waffenträger (weapon carrier) and a tank destroyer. Hardly anything is known about ether of them.
The 10,5cm LeFH Waffenträger auf Leopard was designed by Rheinmetall. Only a wooden mockup was built.
The Sturmgeschutz Leopard tank destroyer was designed in the autumn of 1942; it was armed with the Panther’s 7,5cm KwK 42 L/70.
Both projects were canceled when the Leopard was dropped.

An article by Harold Biondo

A Gefechtsaufklärer Leopard in a fictional livery, as it might have appeared, had it gone into service in 1944 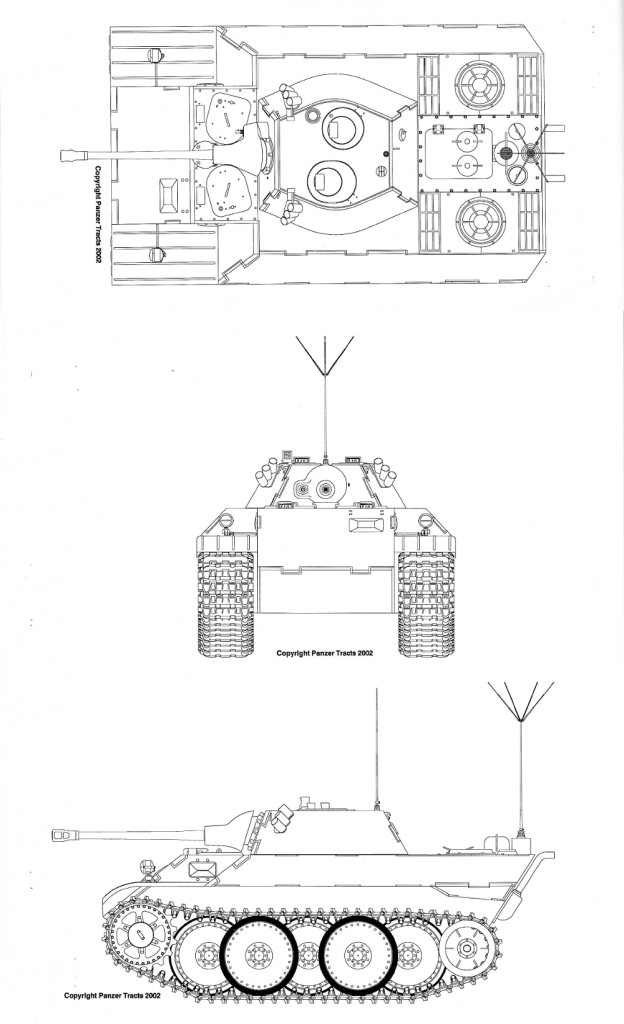 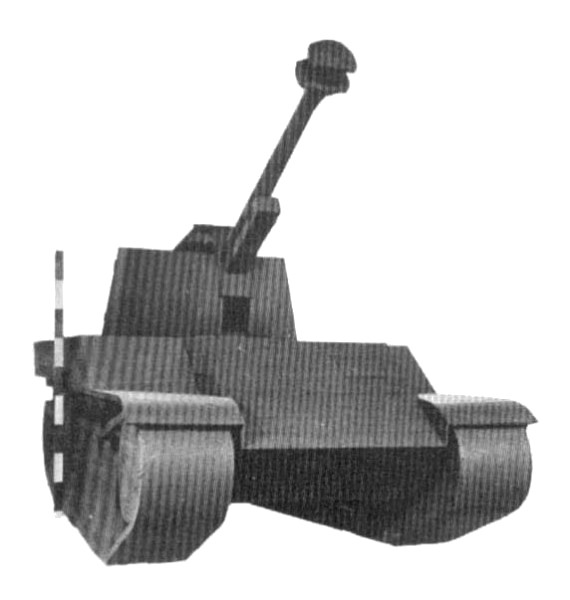 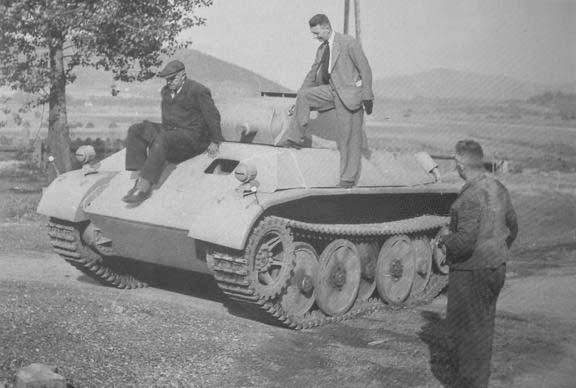 Around the internet this tank is claimed to be the Leopard; it is not. These photos are of Panzer II Ausf.L Luchs V29, which was modified with a wooden superstructure and Praga diesel engine. Source
Originally published on August 21, 2016

I’ve noticed that recently, you guys have been reuploading articles that have already been posted here. What’s the reason for this?
Great article as always.
-Will

Ahh, thanks for the quick response! It shows that you care for your readers.
-Will

So this would be a German equivalent of the M24 Chaffee maybe?

I have to object on the part about the prototype tank being the Pz II L… it is not. I dont know exactly what it is, but Im 100% sure it is no Luchs: the side armor is far too sloped and the front armor misses that box-thingie with the vision ports.
Gonna look through some of the info available to me, I will let you know if I find anything that could be it

It is indeed a Luchs; Panzer II Luchs V29 to be exact. V29 was heavily modified to test a Praga Diesel engine, it was also given a wooden superstructure.

Is it possible to mention this below the picture?

Hi! You mentioned the Luchs tank in this article and I would love to see a full dedicated article to this much loved German tank. I know that is briefly covered in the Panzer II variants, but I would love to hear more about its history and also the statistics of the tank on this site. Thank you for reading and I hope you consider. -Emile

An article on the Luchs is currently being worked on.
– TE Moderator

Was worked on, currently on hold due to the writer abandoning. Uncertain when it will resume.

In WOT the leopard can use a low calibre auto-loading gun, is this historically accurate

No. That is just WoT pulling stuff out to make researchable modules

This does not have anything to do with the Leopard, but in regards to the Panzers! poster at the bottom of the article. What is the vehicle in the very bottom right of that picture?