In 1941, the General Staff requested an investigation looking into the possibility of mounting high-velocity cannons onto tanks. The Valentine or Churchill were ill-suited to mounting anything larger than a 6-Pounder (57 mm/2.24 in) or 75 mm (2.95 in) cannon in their turret. As such, it was decided to mount the cannon in a superstructure with a limited traverse.
What came out of this was the Churchill Gun Carrier. Under the officially long-winded designation of Gun Carrier, 3-inch, Mk I, Churchill (A22D), this vehicle was the first and only conversion of the Churchill chassis into an Assault Gun/Tank Destroyer. 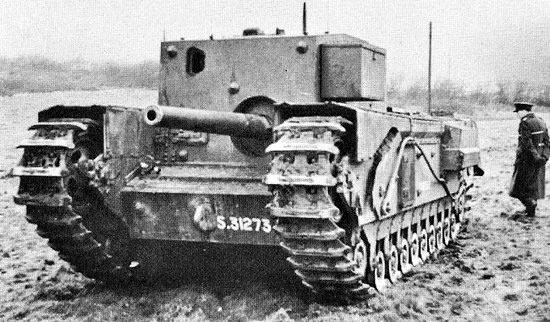 The Gun Carrier was built onto the unchanged chassis of a Churchill. It is unclear what Churchill version was used, but it seems likely it was a Mk.III. It kept the same engine and drivetrain. The turret and forward hull were replaced with a fixed 88 mm (3.5 in) thick box casemate. The bow machine gun emplacement was also removed. On the left side of the casemate, in a ball mounting, sat the vehicle’s main armament. This was the QF 3 inch (76 mm) 20 cwt anti-aircraft gun.
Being a WWI era weapon, the QF 3 inch was obsolete at the time of this vehicle’s development. It had previously been used aboard Navy ships in an Anti-Aircraft role. Vauxhall was provided with 100 guns when given the task of constructing the tank. The cannon would fire a 12.5 lb (5.7 kg) shell at 2,500 feet-per-second (760 m/s). The same cannon was mounted in one of the many prototype turrets for the TOG II. In its ballmount, the gun could depress -10 degrees, and elevate 15. More than enough to peak over a rise without exposing too much of the vehicle.

Some Gun Carriers were adapted for experimentation and training with the Snake, a line-charge mine-clearing device. This was an oversized version of the infantry carried Bangalore, designed by the Canadians to be equipped on special mine-clearing vehicles. This conversion consisted of removing the gun, and mounting banks of up to 25 Snake tubes either side of the armored casemate, giving the vehicle a total of 50 Snakes. 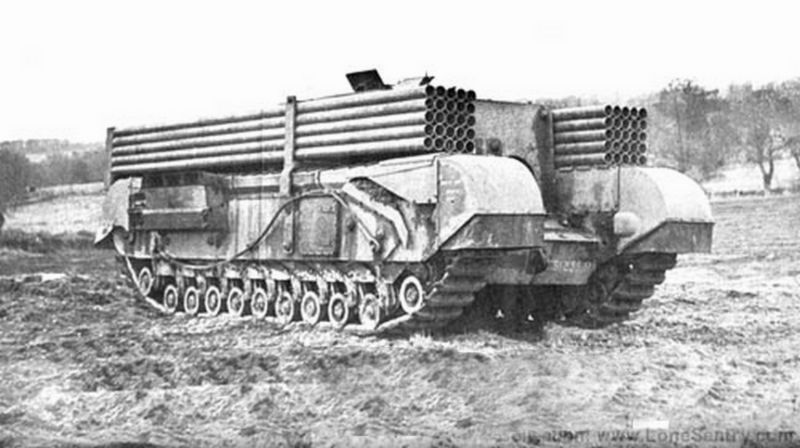 A converted Gun Carrier displaying the 50 Snake mine tubes – Source: panzerserra.blogspot.com
The vehicle in the photo above is the S 32321, the final 3 inch gun carrier. It is open to debate whether the intention was to fire the Snake (Bangalore torpedoes) into wire and minefields using a black powder or weak explosive propellant from inside the tank or just carry it to the deployment area and have the crew get out of the tank to unload the weapons and put them in position. As yet no-one has found documentation to prove it either way. It seems fairly pointless to have such fitments on a tank if the crew have to get out of the relative safety of the armoured tank and manually deploy the Bangalores under enemy fire. It was a Canadian project and they were always mindful of the disaster of Dieppe when unprotected sappers were slaughtered on the beach trying to deploy carpet and ramps to breach the sea wall. There were other iterations of the same concept but they weren’t used either. 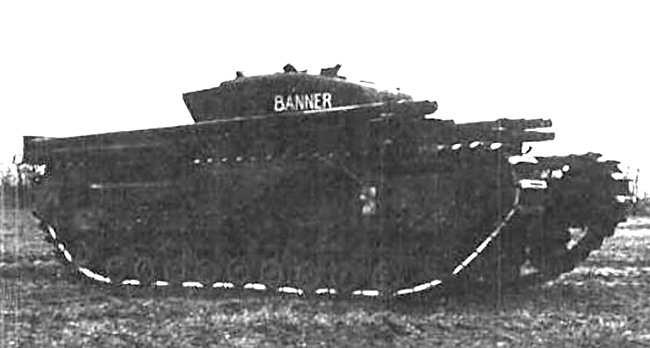 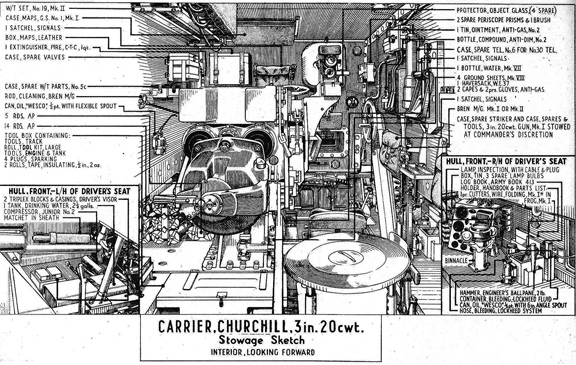 Sketch of the internal layout of the GC – Source: servicepub.wordpress.com

50 pilot vehicles were built and ready for testing in early 1942. Tests continued into 1943 and the tank was found to be satisfactory. However, by this time the 17-Pounder cannon had started to see large scale development. It was even being deployed in the shape of the A30 Challenger, Archer and Achilles. All of these vehicles had much better mobility than the Churchill, at the expense of armor. Production of the new Ordnance QF 75 mm (2.95 in) gun for the Churchill had also begun. Both of these solved the original issue that the Churchill GC had been designed for.
As a result of these developments, none of the Gun Carrier vehicles ever saw active service or combat. The Heavy Assault Tank idea, however, did carry on somewhat into the 18 vehicle designs leading to the A39 Tortoise. The only surviving Gun Carriers are little more than rusting hulks in various tank graveyards, 2 of them in storage outside The Tank Museum, Bovington. None remain in an intact or running condition. 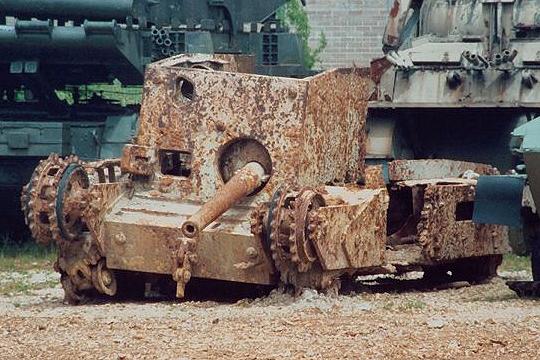 One of many rusting Gun Carrier Wrecks – Source: www.armourinfocus.co.uk

Churchill 3 inch Gun Carrier. This was the only SPG version of the Churchill, built in 1942, fitted with an antiquated 3 in (76.2 mm) AA gun.

Is there more paint schemes for the 3in Gun Carrier

Unfortunately not, as it was only a prototype it it stayed a drab olive base coat.
– TE Moderator

Gun Carrier with Snake was actually known as ‘Wurlitzer’ according to a US Army report November 1945. ETO-052. http://www.lonesentry.com/manuals/armored-special-equipment/index.html
I seem to remember it was demonstrated to the US Army in March 1944(?).

Thank you for this info Nick! I have forwarded it to the author!

It appears that these vehicles were all complete by November 1942 in which case they would by SCC.2 Brown with Dark Brown or black disruptive pattern. Between 11/42 and being issued to the Canadians they were reworked which saw the letter ‘R’ added to the registration number likely with a ‘.’ between the last digit and the ‘R’. Number on nose plate and low down on each side just behind the doors and level with the lower hinge.

Hit the enter key rather than return…..
I have found NO photos showing the spare track on the hull sides as in the profile above. A single link was carried on each side towards the rear. The rework also added the hull applique armour to each side (including air intakes) and the lower nose.

This website uses cookies to improve your experience while you navigate through the website. Out of these cookies, the cookies that are categorized as necessary are stored on your browser as they are essential for the working of basic functionalities of the website. We also use third-party cookies that help us analyze and understand how you use this website. These cookies will be stored in your browser only with your consent. You also have the option to opt-out of these cookies. But opting out of some of these cookies may have an effect on your browsing experience.
Necessary Always Enabled
Necessary cookies are absolutely essential for the website to function properly. This category only includes cookies that ensures basic functionalities and security features of the website. These cookies do not store any personal information.
Non-necessary
Any cookies that may not be particularly necessary for the website to function and is used specifically to collect user personal data via analytics, ads, other embedded contents are termed as non-necessary cookies. It is mandatory to procure user consent prior to running these cookies on your website.
SAVE & ACCEPT
108 shares